If you have fished offshore for tuna or any other large pelagic species, you may have lofted your bait far from the boat using a balloon rather than dropping the bait and motoring some distance away. Now there is another way. You can use a drone to precisely drop your bait where you want it, in some cases up to half a mile from the boat,
provided your line is long enough to not disturb feeding fish.

The first step is to get a drone. Many drones are sophisticated enough that you can avoid crashes into the sea, primarily caused by pilot error. I suggest that you avoid buying a drone for less than $500 unless it is used. Most drones under $500 do not have the lifting capability or a long battery life.

A drone that costs between $500 and $1,500 will give you the best choices, according to experienced drone operators. Battery life is a primary consideration, especially if you want to place several baits far from the boat. Batteries have improved over the last few years and can last up to 30 minutes which allows time to go a long distance and get back. Keep
spare batteries on board along with a charger to enable you to keep flying all day if you want.

I suggest a minimum of two spare batteries; it can take up to two hours for a charge. The 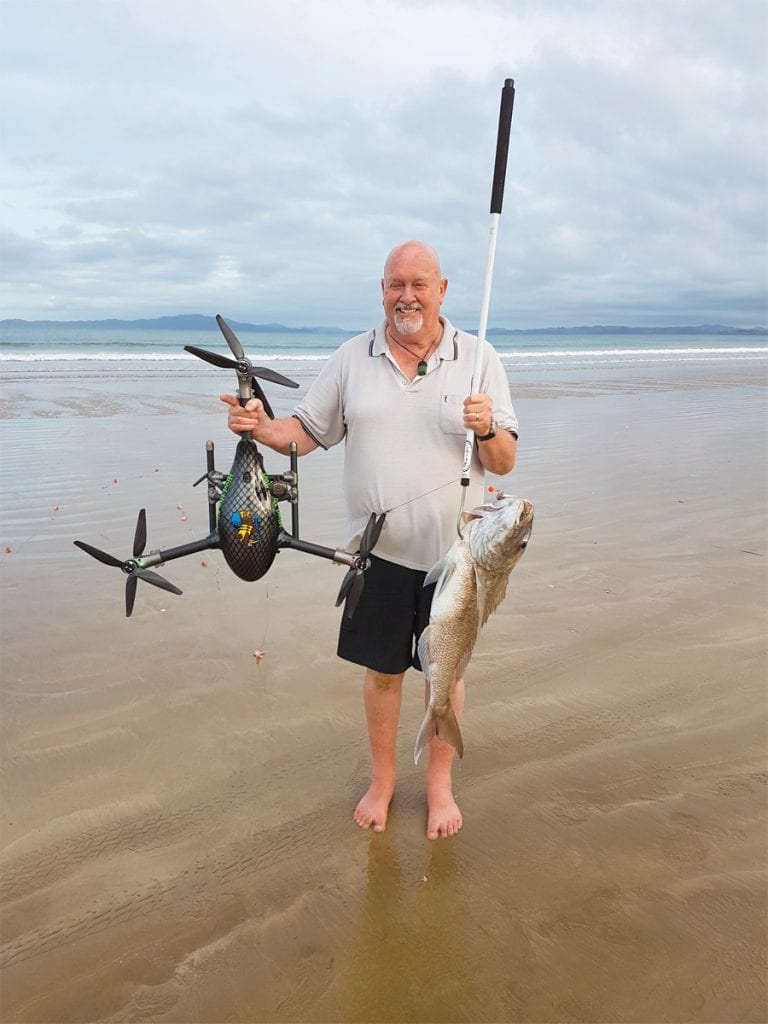 typical price is between $60 and $140 per battery depending on the drone. Another important consideration is range; you don’t want to fly the drone beyond its limit and lose connection; you may lose the drone.

There are different configurations that allow the fishing line to connect to the drone. Drones with long landing legs give you plenty of room to secure your outrigger clip. Ideally, you should balance the bait line directly below the middle of the drone. You can make a simple harness from leg to leg (using lightweight fishing line) to suspend the downrigger clip from the center point. There are also bait release systems that mount to drones and are operated through the controller.

The drone should also have a return-to-home function. It’s important to make sure the function is set to return to the controller and not the takeoff point; boats move. Drones
with this function automatically return when the battery is low or the connection is lost. You can also engage it if you lose its location.

The second step is to learn how to fly the drone. Take it to an open area, such as a ball field, and practice using it. There are a number of YouTube videos that can get you started with the basics. Today’s drones are so smart that it should only take a couple of hours to become fairly proficient. Learn how to take off and land. Practice catching it in the air.

When you feel that you have become competent at flying your drone, rig it to carry a downrigger clip and polish your “fishing” skills before you do it from the boat to get a feel for the clip’s tension and how far the line can be flown before its weight causes the clip to release. Make adjustments until you’re confident the drone can take the line the distance you want it to go. An average fishing reel can hold around a thousand feet
of line, so that should be plenty.

Scouting with your drone Before you load up your drone with bait, you can use it to
scout potential fish locations. The drone should include a 4K camera to allow you to find fish. What the camera captures in flight is exactly what you see on your monitor, tablet or smartphone. You will also be able to spot potential obstructions and tidelines where fish might gather. Provided the water is clear enough, the drone can see to a good depth,
but, by FAA rule, you can’t exceed 400 feet. Some drones will automatically stop at that height.

You should be able to notice baitfish along weed lines, rocks and shoals and if larger fish are feeding on them. This prevents spooking the fish with your boat, but keep the drone about 30 feet off the water to prevent fish from feeling any vibration from the noise or the propellers. If the drone is loaded with bait and you spot a fish, you can drop the bait ahead of it. If the bait doesn’t release, fly the drone back to the boat to check for problems. Don’t try to reel the drone in hoping that it will release the bait.

You can fly in winds up to 20 mph with the latest drones, but it cuts down on battery life as the drone tries to stay in one position and is buffeted by the breeze. In general, the lower the wind, the longer your battery will last. Keep in mind that recording video also quickly takes away battery life.

An advantage of longer landing legs is it makes it easier to catch the drone when brought back to the boat. It can be difficult to land on the deck, so hover the drone within reach
and grab it by the legs only. Wear gloves in case you fumble the drone. The propellers nick the hands—it hurts and will cut you. The avoidance sensors will react to a hand reaching up to grab the drone, but it can be done and is safer than trying to land it on a moving boat. Some drones have the capability to disengage the sensors. Once the drone is captured, shut it down immediately.

Which Drone is Right for Me?

There are a number of drones capable of fishing, including 3DR Solo, Autel Robotics, DJI, UPair, and Yuneec. I’ve included the ones I’ve had experience with and are on the upper end of the price range, but with a little research, there are drones that can do the job for less than $1,000.

Waterproof drones are available, and they work well without the fear of soaking precious electronics. The SwellPro SplashDrone 3+ can land in the ocean and take off again and
drop multiple baits at once. The fishing edition has a 2.2-pound payload capacity, .8-mile casting range and 18 minutes flight time. The base price is $1,348. The PL3 payload release and camera is $329.

The not-so-waterproof drones include DJI and Yuneec. The DJI Phantom series is a popular choice among pilots, but the latest Phantom 4 is no longer in production (the Phantom 5 is expected this year); however, you can still purchase new (and used) units at retailers. The landing skids allow room to secure an outrigger clip and has a 4K camera with 3-axis gimbal. Flight time averages around 28 minutes with a one-mile range. Prices vary for the Phantom 4 series starting around $1,000.

DJI’s Mavic 2 has short landing legs, but Gannet has bait release systems made specifically for Phantom and Mavic drones. Flight time for the Mavic 2
Pro and the Mavic 2 Zoom is up to 31 minutes. The Pro has 4K video resolution Hasselblad camera and the Zoom has a 24-48 optical zoom lens built-in and is currently priced at $1,499 and $1,299, respectively. dji.com

Yuneec has a few drones in its collection that make the grade for fishing. The Typhoon H Pro RealSense (six-rotor drone) has a flight time of 25 minutes with a range of 1.2 miles. A three-axis, anti-vibration gimbal rotates 360 degrees for the camera to capture 12-megapixel stills and 4K video. MSRP: $1,499.99. yuneec.com

AeroKontiki is a longline fishing drone built in New Zealand. Primarily for beach fishing, the carbon fiber drone can carry 8.8 pounds and fly in 18-knot winds. It doesn’t have
a camera but can take around 25 baits with 24-ounce sinkers more than a half-mile out. The AeroKontiki Evolution III basic package is $4,387; aerokontiki.co.nz