The 23rd Annual Marlow Spring Rendezvous, hosted by Marlow Marine Cruising Club’s was one for the record books.

Faro Blanco Resort & Yacht Club hosted the Marlow Marine Cruising Club’s (MMCC) 23rd Annual Spring Rendezvous that coincided with the 145th running of the Kentucky Derby. Yep, the one that will forever go down in the record books as the first time a Kentucky Derby-winning horse was disqualified for an in-race foul. Imagine the wagers affected after that decision.

From the Welcome Reception on Thursday, May 2nd to the Awards dinner on Saturday, May 4th, all bets were off. Marlow Yachts provided owners with an entertainment-filled weekend. The benefit of networking with fellow Marlow owners is to learn and share ideas and experiences about what the boat can do, where it can go and solutions to any problems that occur.

On top of that, the MMCC invites a number of technology companies to hold seminars on products that can make cruising more enjoyable through new technology and
how to care and maintain engines as well as air conditioning and desalination systems. Owners learned about the Internet connection at sea, wireless docking remotes and the joint venture between Garmin and The Yacht Group for the OneHelm integration.

The highlight of the seminar schedule was David Marlow’s roundtable discussion when he provided insight about new design ideas; changes made to simplify systems, such as
separating the heat exchanger from the chiller system, and what technologies, structural materials, and heating and climate-control systems were invented for the new Marlow
Voyager 100 that has plans to cruise to Antarctica. All these ideas benefit future and present Marlow owners with better materials and improved systems.

One change that will keep the popular 58-foot Marlow viable today is the addition of an aft beach club that allows owners and guests to enjoy an indoor-outdoor lounge area along the waterline. The space will also serve as the crew quarters as the beach club will
replace the designated crew cabin in previous models.

A question on solar power was raised, but the discussion quickly turned to new battery technology because solar power won’t progress until battery storage improves. Thin-plate technology, such as NorthStar’s Absorbed Glass Mat batteries, is leading the way with companies trending toward lithiumiron, lithium-polymer and lithium-carbon instead of the lithium-ion technology. Marlow Yachts has always pushed the envelope to test and develop new ideas which coincide with the company’s motto: Each one better than the one before.

The weekend was filled with fun activities, parties and the christening of new yachts to the “club.” This year’s event included some new activities that appealed to the athlete, the animal lover and the artist. Active early birds joined a sunrise yoga session Friday and got their hearts up to speed with a 5K sunrise run on Saturday— that was after the Fire & Ice theme party the night before, where the costumes were smokin’ hot and crazy cool. For the backyard athletes, there was hula-hoops, badminton, and cornhole with a few water balloons mixed in.

Artists sat in front of easels with brushes in hand to paint an underwater turtle or seahorse scene. This was no finger paint mish-mash, but the real thing. In fact, during Saturday’s “Run for the Roses” dinner, the third-place painting by Eric Schoenfeld was auctioned off to benefit the Turtle Hospital in Marathon, raising $4,000 within 15 minutes. The yacht Paws for Life was proud and happy to make the donation for such a good cause. Over the weekend, a number of owners, families, and guests visited the Turtle Hospital to see their work rehabilitating endangered sea turtles.

Mint Juleps were the featured cocktail, and fascinators, spring colors, and flowers were Saturday evening’s style that led up to the Kentucky Derby. Those two minutes were a blur before the evening’s celebration of an incredible weekend. Awesome weather, magnificent boats, and as one owner said, a Marlow staff in that embodies the family lifestyle all make the company great to its owners. It shows. 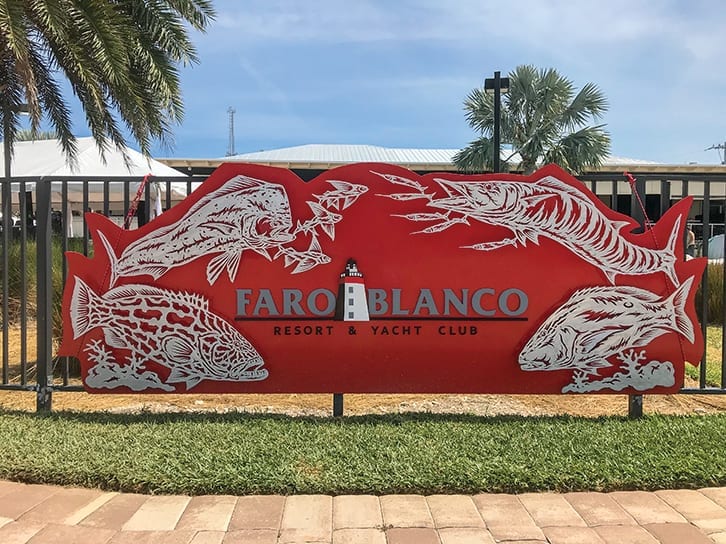