The lowdown on solar panel selection and installation

Sunshine and boats are a natural together, so why not use all that free energy? The strategy behind solar power on board is simple: A solar panel converts sunlight into electricity, after which wiring conducts it to your batteries for storage until needed. Solar panels are used to keep batteries or banks charged rather than run equipment directly. This arrangement allows the panels to store energy whenever generated, while providing a steady source of power to a piece of equipment even when the panel is not producing it.

While they do require an initial outlay, solar panels can easily pay for themselves in money saved and independence gained over their service life. They’re noiseless, have no moving parts, and they provide free electricity for years with minimal maintenance.

Almost every boat can benefit from solar energy. Smaller craft (whether at a slip, mooring, or on a trailer) can keep their batteries charged without the need for shoreside power. Larger vessels can use solar power to supplement or even replace other onboard charging sources, reducing or eliminating the need to run engines or generators to keep batteries topped off.

Solar panels contain photovoltaic cells, small silicon semiconductor devices that convert sunlight into electricity. Each cell generates between 0.45 and 0.5 volts, depending on exposure to direct sunlight. Cell size determines amperage, with a 3-inch cell producing roughly 2 amps, a 4-inch cell a little over 3 amps, and a 5-inch cell around 5 amps.

Construction-wise, the three main types of solar panels are monocrystalline, polycrystalline, and amorphous (or thin-film) technology.

Monocrystalline panels have been around the longest. They contain thin slices of crystal silicon housed in a rigid, aluminum frame and covered with tempered shatterproof glass. They’re the most efficient of the three types (around 17 percent) and have the highest electrical output per area but are also the most expensive.

Amorphous panels (aka thin-film photovoltaic cells or TFPV) are made by placing a thin film of active silicon on a solid or flexible backing (such as stainless or aluminum sheeting) depending on whether the panel is to be rigid-framed and glass-fronted or flexible.

Amorphous panels are the least expensive of the three types; however, their efficiency is also lower, about 8 percent or roughly half that of a monocrystalline type. This lower output is somewhat mitigated in newer panels, which use three-layer construction. Each layer absorbs different colors of the solar spectrum, so the panel will deliver more power longer each day and during low-light conditions than the other two types. 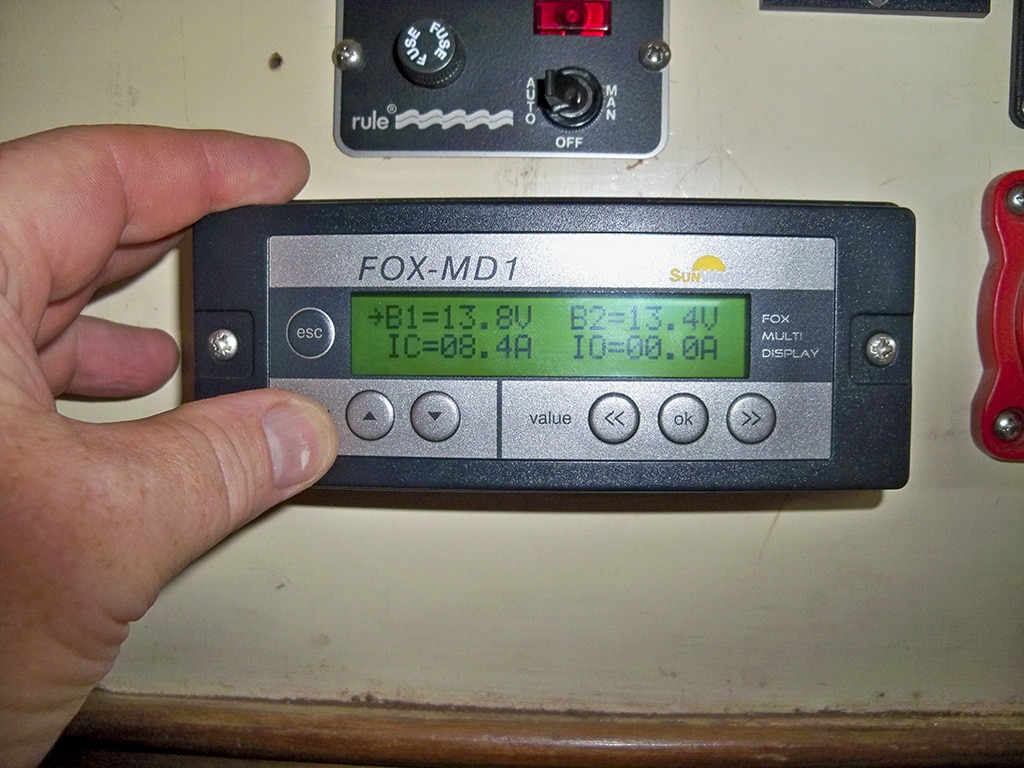 While factors such as cost, mounting options, and output are important, a successful installation depends on knowing what you want the system to accomplish. Is the goal to float-charge a battery or supplement an overall vessel energy plan? Answering these questions up front will help determine the type, size, and number of panels needed.

To understand the process better, let’s walk through the basic steps to determine power requirements and considerations for a single solar panel installation. While the example itself is simple, the steps are the same used to plan more complicated installations.

For our example, the goal is to install a solar panel to provide charging for a 12-volt, 100-amp hour wet-cell battery used to power an automatic anchor light on a moored vessel. The first step is compiling a daily power consumption estimate so we can determine how much solar power is needed.

The daily self-discharge rate for a wet-cell battery is roughly 1 percent, meaning that 100-amp hour battery requires one amp every 24 hours just to maintain the status quo. The anchor light draws 50 milliamps per hour of operation, and we’ll assume operates 10 hours each night. Multiplying current draw (50 milliamps) by hours of daily operation (10) is a daily energy expense of .5 amps.

This means our solar panel must meet a minimum daily energy tab of 1.5 amps—one amp of battery self-discharge rate plus .5 amps of power draw for the anchor light.

Next is figuring out panel size and the best mounting location. For our example, let’s assume the panel will be a horizontal, fixed-mount installation. A 10-watt, horizontally mounted panel should generate between three to five amp hours per day. We’ll need at least 13 volts to fully charge our 12-volt battery. As most solar cells generate at least 0.45 volts, you’ll want a panel with at least 33 cells, which should provide around 14.85 volts.

Keep in mind that’s the minimum needed, which may not be enough once you factor in a few cloudy days. Most panels are designed to generate between 15 and 20 volts to overcome problems like cloudy days or inherent electrical resistance within the panel or installation components. While this higher voltage lets you make up for less electrically productive days, it also means you should install a solar charge controller (voltage regulator) to avoid battery damage due to overcharging.

Where to Invest Now?