The trends in recreational sonar and underwater visibility have been clustered around high definition imaging. This lets you differentiate between fish species, multi-beam transducers that scan down and all around your boat, and waterproof cameras that bring the action from down under right to your console. With all this new technology, the fish really don’t stand a chance. Which type of sonar will you choose for your boat? 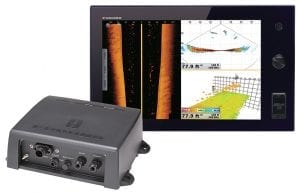 Furuno nabbed an award in the fish finder category at the 2018 National Marine Electronics Association (NMEA) conference. The winner? Their DFF3D Multi-Beam Sonar. With a compact multi-beam pocket transducer (non-protruding, therefore protected), the revolutionary DFF3D is perfect for both deep and wide water columns. It delivers side scan detection of 650 feet and down scan ability to 1,000 feet.

Fish targets are shown in 3D and the sonar offers four customizable display modes. You’ll see a real-time water column echo that sweeps 120 degrees port and starboard. The triple (middle, left, right) and single (under the boat) beams can display simultaneously on one screen. Angle and width are selectable so you can focus on the structures to either side of the vessel and determine which way schools of fish are moving.

The DFF3D is high tech but simple so you don’t need to be a sonar aficionado to understand what you’re viewing, and it even works at speed. Use it to create your own bathymetric charts or go treasure hunting for wrecks. The black box module costs $2,095 (without transducer or MFD). furuno.com 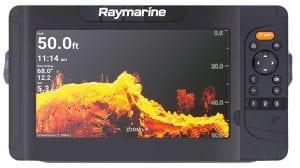 Raymarine makes it elemental with their new Element Sonar Series that delivers dramatically improved high-resolution imagery at close range (to 100 feet in depth or distance) with the HyperVision feature. Using a 1.2 MHz frequency, the sonar delivers shorter range but better resolution. 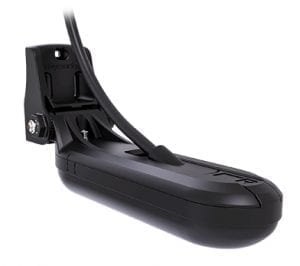 Raymarine also introduced the Element-compatible HV100 multi-beam transducer that does DownVision, SideVision and RealVision 3D in both HyperVision as well as 350 kHz CHIRP (compressed high-intensity radiated pulse) sonar that ranges up to 600 feet. It also has traditional 200 kHz CHIRP sonar and a water temperature sensor for high-speed bottom tracking up to 900 feet deep. Transducers are available as a transom or through-hull mount. The sonar and GPS sensors are contained in the multi-functional display. Installation is as simple as mounting the display and transducer, connecting to power, and routing the transducer cable to the screen.

Element isn’t a touchscreen product. It’s button-controlled, which is better when working with wet or dirty hands. Element HV models, which include the HV100 transducer and charts, run from $880 (7-inch model) to $2,330 (12-inch model) with sizes and price points in between. raymarine.com 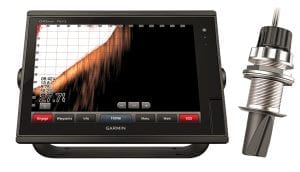 It delivers both scanning and live sonar with crisp images of bottom structures, bait and fish up to 200 feet below your boat. Garmin has added their Panoptix PS51-TH multi-beam through-hull transducer for forward-looking sonar.

The PS51-TH features a standard two-inch, stainless steel, thru-hull mount that displays depth and temperature data and is compatible with all Panoptix-capable Garmin chartplotters. See bottom structure as you prepare to anchor, keep divers in sight as they descend the anchor rode or check out the fish swimming in front of your boat. You can actually watch your lure as it sinks and watch as fish attack it. MSRP $1,499.99; garmin.com 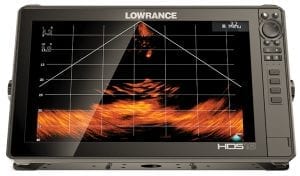 side scan and down scan active imaging. Add their new LiveSight real-time sonar for super clear details forward or down. Include their Genesis Live Charting feature to create custom fishing charts to keep or share.

On the HDS 12- and 16-inch models, you can also add LiveCast that integrates with your smartphone. Display Google Earth on one unit and sonar information on the other. Or simultaneously fish and stream your favorite sports team.

The LiveSight transducer eliminates the need for multiple transducers and includes three mounting brackets for ultimate flexibility. HDS Live displays range in size from 7 to 16 inches and retail for $949 to $4,499, respectively. lowrance.com 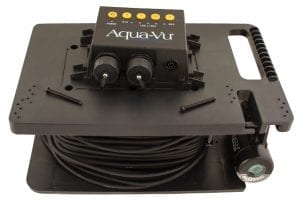 When sonar just isn’t enough, check out the live fish action below with a high definition camera. Aqua-Vu, the Minnesota-based maker of underwater cameras, introduced their Multi-Vu Pro system that adds an underwater video to sonar or to an LCD TV screen via IP67 waterproof connectors.

Complete with a high-definition Aqua-Vu XD camera (with 75-feet of cable and a 120-degree field of view) the Multi-Vu Pro system features both analog (RCA) and digital HD (HDMI) video compatibility. It works with select MFD models from Garmin, Raymarine, and Lowrance. Also included is a 12-volt power cable for connection to an auxiliary power source such as an onboard battery.

View sonar images side-by-side with real-time underwater video and confirm fish species as well as vivid detail and layout of the structure. It’s like spying on the fish in their living room. MSRP $699; aquavu.com

With today’s sonar systems, you can go fishing with the guys and not miss March Madness. You can fish from your warm icehouse and watch the bait in the frigid waters on your TV. You can minimize the holes cut into your hull with multi-function transducers that do double and triple duty with one installation. Seriously, what’s not to like?