There’s more than meets the eye when fishing an inlet. There’s much find in the rips, currents, and eddies.

The solid snook hit exactly where I expected, inhaling a large swimbait just as it fluttered out from beneath a bridge spanning a small pass along Florida’s southwest coast. As I hoped, the intersection of the boulder-lined shore with the fast current flowing between the bridge pilings caused my lure to sweep in a tight arc and drop into a small groove of deeper water as I drifted on the outgoing tide. It was there the snook was waiting to ambush anything that might struggle in the current. This is fishing in an inlet.

Releasing the 12-pounder back into the pass, I marveled at its trim, gold appearance. No monster, this one, but it was double the size of fish I had been catching on a set of nearby flats. “That’s the beauty of inlets,” I remember thinking to myself. “They always have a few big fish on the prowl.”

It’s no secret that serious inshore predator fish species favor inlets. In fact, most expert anglers spend a lot of time working these areas with the hope of catching their largest fish of the year. Sure, you can tempt a few monsters in shallow backbay waters or pick big snook, channel bass, gorilla blues, and monster stripers out in the open ocean depending on where you are stationed along the coast, but inlets and passes concentrate predatory fish like few places can and allow sharpies to maximize their efforts.

“There’s a lot going on in an inlet to favor large predators over baitfish species,” says “Crazy Alberto” Knie of Tactical Anglers, a tackle company known for its popular Smart Lure series. “If you aren’t already looking for big fish there, you should be.” 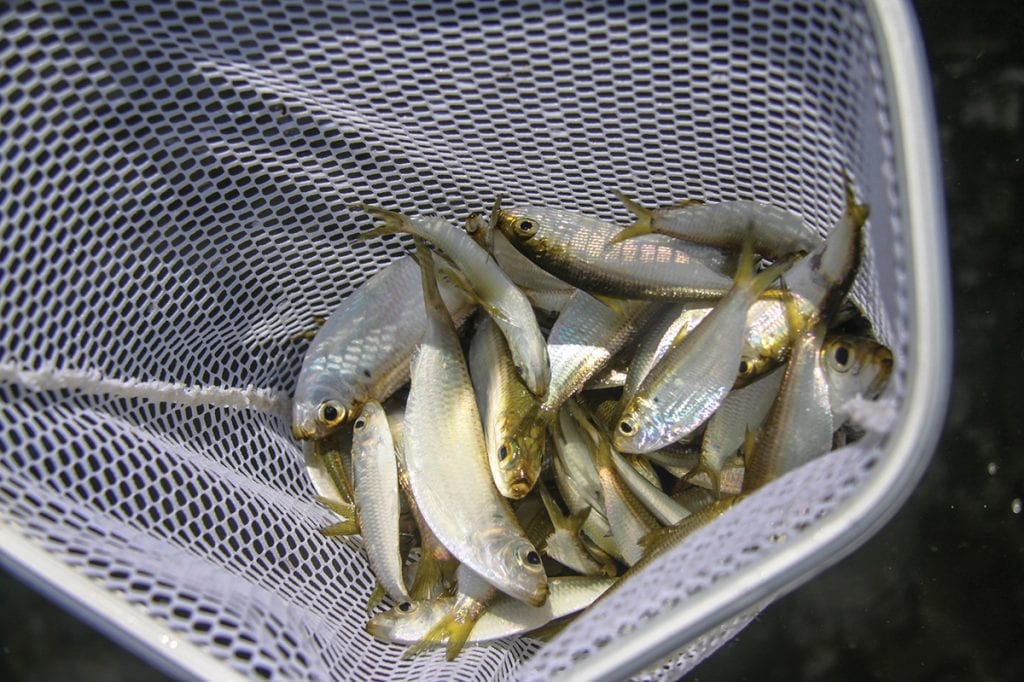 According to Knie, who has fished inlets and passes from southern Florida to the northeast and hooked plenty of trophy-class stripers, snook, tarpon, and other species along the way, inlets feature a great combination of current and structure. “Any time you can bring those two factors together,” says Knie, “you’ve got a starting point. It’s a place where big fish are likely to congregate because they have an edge in power to deal with the current and ambush points in which to hold while waiting for baitfish overwhelmed by turbulence.

Consider, too, where all that bait is coming from on an outgoing tide,” he adds. “Most inlets drain shallow flats, bays, and harbors. On strong new and full moon tides, entire schools of baitfish get sucked into the inlets and flushed out to sea. Down south, pilchards and finger mullet, along with big shrimp and the occasional menhaden, make up most of the menu. Up north, spearing, bay anchovies, and bunker are among the usual fare. The end result is a giant chum slick extending from protected shallows right out into the open
ocean, sound or gulf. No self-respecting trophy fish can pass up that buffet.”

As strong currents slice through sandy bottoms and create cuts, bars, and troughs, the rapid changes in depth also form rips and eddies. At the same time, bends in an inlet or pass make coves and points where baitfish gather to rest and regroup. Here, gamefish slice through schools of smaller critters pooled up by the current. Adding a bridge to the equation offers even more structure plus overhead lighting that creates late-night shadow lines where tarpon, snook, drum, blues, and stripers explode on passing baitfish silhouettes.

“It amazes me how many serious anglers overlook the potential of fishing inlets after dark,” says Knie, who recommends tossing a Tactical Angler’s SubDarter lure under such conditions because it’s easy to work in a variety of ways from a straight, unbroken retrieve to a series of jerks and direction changes. “Either way, it presents a big silhouette and big fish like big baits. I’ve had bull reds on it, tarpon, snook, and even a few sharks. In the mid-Atlantic and northeast, it’s also accounted for cow stripers, big weakfish and slammer blues.”

Another great lure for fishing southern inlet waters is a Flair Hawk jig. It’s like a cross 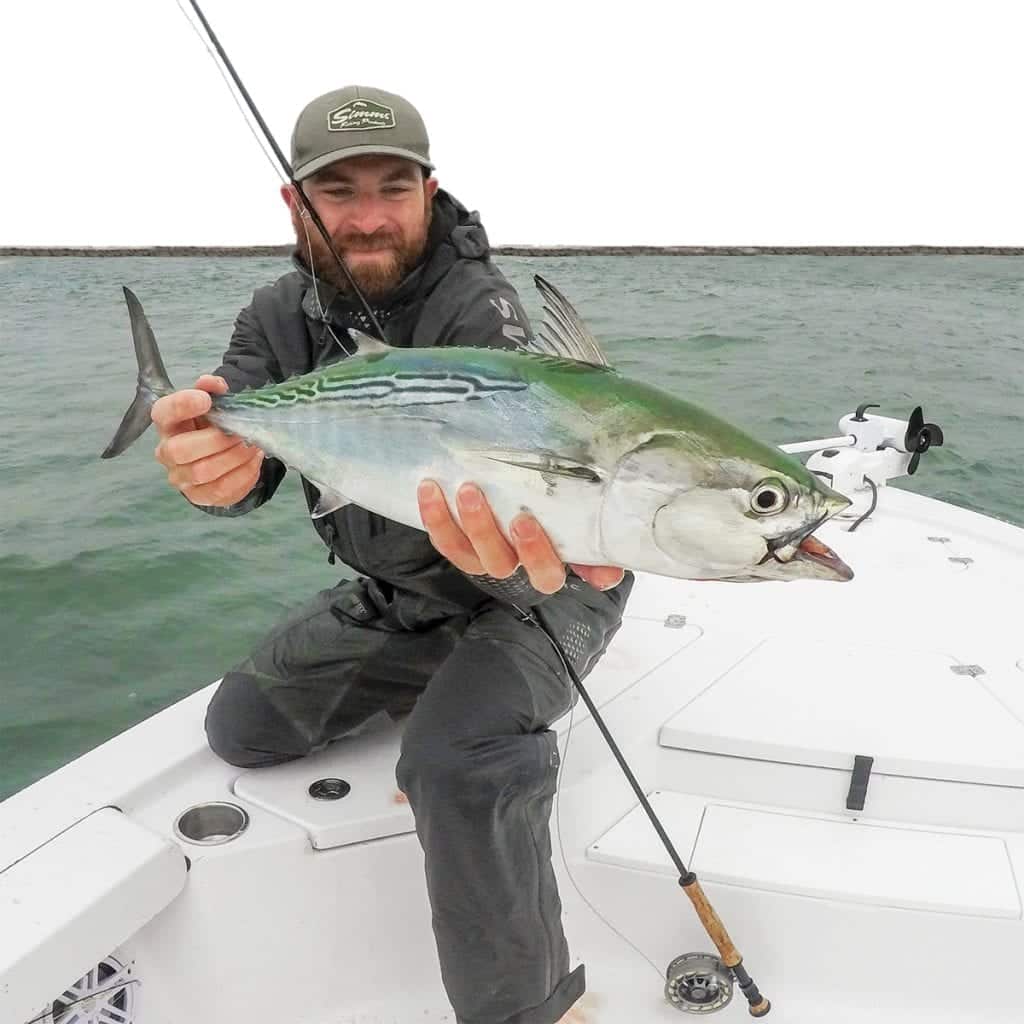 between a bucktail and a parachute lure. Work it close to the bottom with a pumping action to make it pulse during the day, and it will catch a multitude of species. Offshore Anglers makes a version they call a Redtail Flair Hawk that is a popular choice for targeting snook, redfish and jacks.

In northern waters, I favor bucktails and large soft plastic swim baits, although I’m likely to use a popper if bass or blues show on the surface. Live bait is yet another option, of course, with pilchards or shrimp favored in southern passes and live eels or bunker the preferred offerings from New Jersey north.

Water temperature enters into play with inlet productivity as well. In many areas, ocean temperatures can run as much as five to seven degrees cooler than those inside a bay or harbor. Early in the season, warm bay water flowing out of an inlet can turn on lethargic fish. Later in the season, rising tides usher cool water into the shallows to refresh summer species. Often, these fish will move up into inlets to feed.

“When you really get down to it, there’s little difference between fishing an inlet or another one,” says Knie. “Sure, there are more species to catch in southern waters than there are up north, and baits and lures might change from one place to the next, but the basic theory holds the same. Consider the tides, line up the structure, and work any holes, rips, eddies, or seams you can find. Keep an eye on other boats in the vicinity for safety’s sake, and never pass up the chance to work shadow lines beneath bridges on the graveyard shift.”

Having discussed the strong currents, rips and varied bottom configurations common to most inlets and passes, it should come as no surprise that these are not areas where you can let down your guard. Many skippers I know keep their engine running at all times, even while on the drift when fishing an inlet. That way, they can react quickly to stray waves or boat wakes bounding off the rocks, changes of direction in the current or a rapidly rising bottom.

“Even though your engine’s running,” advises Knie, “keep your lights to a bare minimum and your music muted if fishing at night. Despite all that rushing water, big fish can still be quick to spook. The less they realize you are around, the better your odds of hooking a monster.”

Be aware, too, that you need to hold a secure position as you drop your bait or lure over the side. We’re talking heavy fishing sticks, big baits and, possibly, monster fish at the end of your line. Toss in a rogue wave or two, bouncy rip water, plus other skippers that may not quite possess your fine and courteous seamanship skills, and you’ve got an accident just waiting to happen.

Keep your drifts short and targeted to specific areas. Always watch the water, and be aware of boaters around you at all times. If you can do all that, and maintain your footing, you just might be able to haul a lunker or two from the inlet depths.