What is a Rip Current? Is it the same as a riptide? 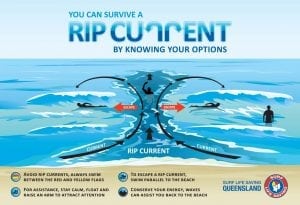 A rip current is not a riptide or an undertow. Whereas rip currents occur on a beach through breaking waves pulling water back out to sea, a riptide is swift-flowing water associated with tidal fluctuations and is typically found near the mouths of estuaries, bays, harbors, and inlets.

This strong tidal flow is typically more powerful than rip currents and can carry a person far off shore. An undertow occurs when the uprush (or swash) and the resulting backwash of large waves happen in quick succession.

When the backwash is stronger than the swash, a swimmer may feel as if being pulled under, and indeed may tumble in the wave, but it ends with the next wave and does not pull a swimmer out to sea.

For more on this, check out our Sea Watch columns.