The beauty of the new Palm Beach flagship goes beyond her good looks.

Packed with more than a thousand vessels snuggly docked fender width apart, the Fort Lauderdale International Boat Show can overwhelm even the most fanatical shopper. When boat after white boat line up in a row, they can all start to blend together. That was the scene on some docks at the November 2019 show, that is until you got to B dock. There, within a majestic display, was a 70-footer whose stately dark blue hull and enduring lines trimmed in golden teak caught the eye, a Palm Beach 70. It looked as if it had traveled through time from the Great Gatsby era, yet belonged in the present, able to achieve that timeless quality that eludes many models.

Designed for the Times
Aesthetics, though, are only the beginning of this yacht’s beauty. Behind the surface of the classic design is a very modern machine, whose combination of fastidious design and construction and outside-the-box weight savings makes it surprisingly fast and efficient.
Palm Beach Motor Yachts introduced its flagship 70 this past fall in response to requests from clients who wanted to grow their yachts within the Australian brand. Five feet longer than the previous fleet queen (the PB65), the 70 is a highly customizable flybridge model offering up to four staterooms and able to reach 38 knots.

When you consider the source, the speed makes sense. The yard was founded by Australian sailor Mark Richards, who is, as marketing director Joel Butler succinctly puts it, “a speed freak.” Line honors winner of the grueling Sydney Hobart yacht race nine times as the skipper of Wild Oats XI, Richards carries over the racing mentality to the motoryacht world in his role as CEO, intensely focused on efficiency, weight control, and attention to detail. “Mark can be a tough guy to work for sometimes because he’s a perfectionist, but the owners win out of that,” says Butler. 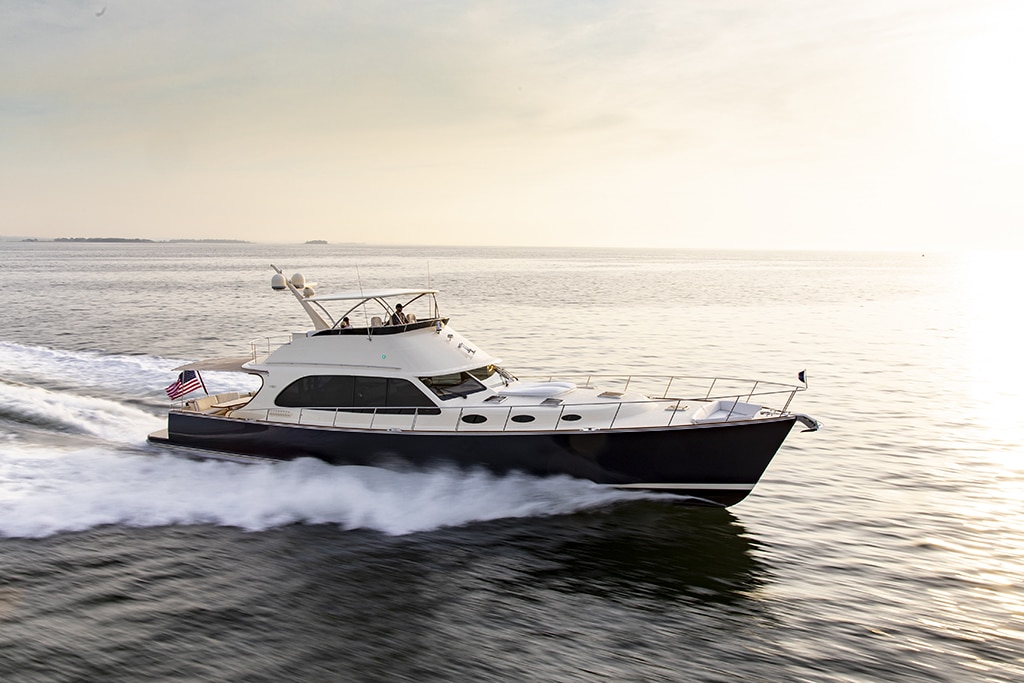 That efficiency starts with the semi-displacement warped hull. “This means it’s super fine in the bow and rolls into soft shoulders that just sort of fold all the water away so you get no hull slapping,” Butler says. “It’s incredibly flat aft and has six to eight degrees deadrise. It’s built like a racing boat.” As for construction, the hull and all components are fully vacuum-infused for consistently even distribution of the vinylester resin that makes the yacht as strong and as light as possible.

The most efficient system, hence the standard power for the Palm Beach 70, is 1,000-hp Volvo Penta IPS 1350 drives. The first hull equipped with these drives recently clocked 37.6 knots in preliminary sea trials and is expected to make the target 38 knots after some finishing touches. Shafts are always an option for any Palm Beach boat, and the owner of the premier hull (the one displayed at the Fort Lauderdale show) picked the Volvo Penta D13 shafts. These give him an efficient cruise at 24 knots and top out at 32.8 knots. At cruise speed, fuel consumption is 24 gallons per hour for each engine, which means the yacht can go for 793 nautical miles at a good clip.

If you’re looking for a flashy rooster tail to accompany the fast pace, this is not the yacht for you. The hull is designed to slice through the water rather than using precious energy to climb on top of it, so the wake is barely discernible. The design has the added benefit of being quite shallow. The draft with IPS drives is just over four feet while shaft propulsion gives closer to three-and-a-half feet, so all of the Bahamas is fair game.

Everything from the deck up is fully infused carbon fiber, which keeps the overall weight down and the center of gravity nice and low. Also helping to keep the weight centered and low for improved performance is a system the yard custom engineered for the IPS drives. Instead of mounting the engine blocks aft, on top of the drive head as is typical, they place the blocks for the engines amidships and run a single piece carbon fiber drive shaft back to the pods. “That pulls a heap of weight out,” says Butler, not only by replacing heavy steel with lighter carbon fiber, but also because carbon fiber doesn’t need the extra componentry that steel does to reduce the harmonics; there’s no need for intermediate bearings, he explains. It’s innately quieter.

With three guest staterooms and one generous crew cabin, the first hull nicely shows off the capabilities of the flagship’s accommodations. The first owner chose to situate the galley on the main deck to port of the inside helm station. Down a few steps forward leads to a wide master stateroom to port and a queen-berth VIP cabin in the bow, each with private head. To starboard is a convenient laundry room and a cozy twin-berth cabin tucked under the helm station whose ensuite doubles as the dayhead. This layout was drawn in order to accommodate the six-foot, three-inch captain, giving him what Butler describes as “the Hilton of crew quarters” under the galley, accessed from the salon. The interior design is very much what you would expect to match the classic exterior styling with lots of warm satin-finished teak paired with pleasingly neutral fabrics. It’s simple, clean, and shows a lot of boating common sense with nary a sharp corner in sight.

Of the seven sold hulls, only the last two are similar, says Butler. The others have been adapted to suit very personal preferences. Take, for instance, Hull No. 2 which recently arrived in California. This owner opted for a single, cavernous stateroom below lavished in high-gloss teak.

Richards personally works with each client to design their ideal boat. “When [Richards] steps on board this boat, he doesn’t see the surface, he sees behind it,” says Butler. “He knows what the fixing is behind that and what the skin is behind that and everything it is made of because he’s been involved in the entire design process. He can fully customize on the spot with the customer, and they know that they’ve got the right guy that’s going to build their boat right.” 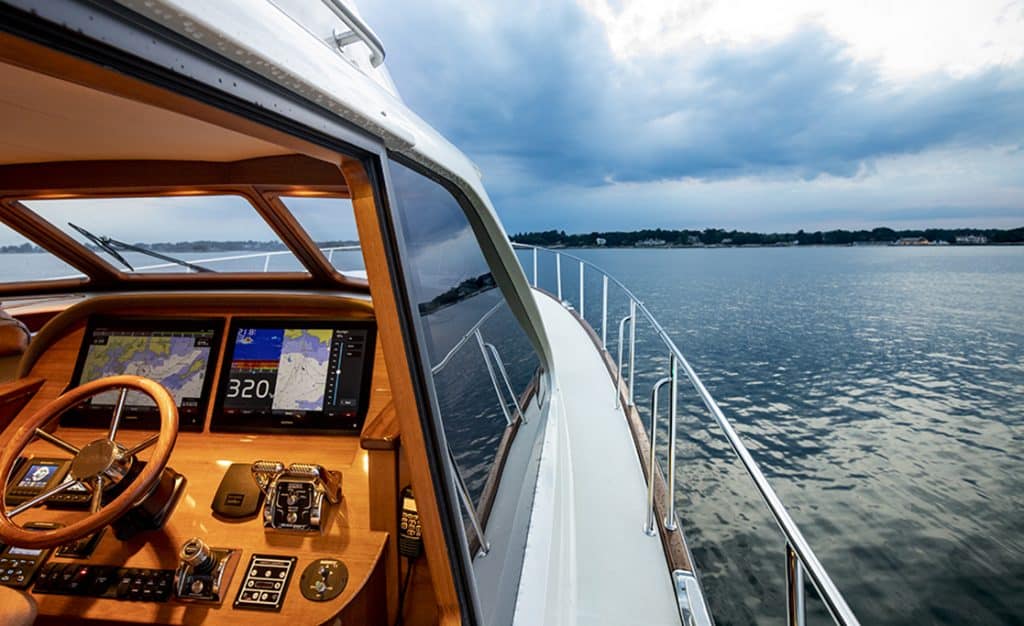 On deck is a cockpit set up for alfresco dining and a foredeck seating area akin to a bowrider. This recessed nook at the bow is a styling point reminiscent of the commuter yachts that the Palm Beach look mimics. Trailing the hull is an expansive swim platform, and up the ladder from the aft deck is the flybridge, another comfortable lounging spot to enjoy all-around views or take the controls. On the first hull, the radar mast here lowers with the help of an electrical actuator to clear low bridges, a custom request of the owner from North Carolina.

These Australian boats seem to have hit home in America with the seventh PB70 sold during the Fort Lauderdale boat show. Butler confirms that U.S. owners commissioned all but two hulls. The demand has already created a backlog so if you want one, act fast; there’s currently an extra six-month wait time tacked onto the 12-month build.

0
Southern Boating Editorial Team May 26, 2020
No Comments Yet