Marketgauge
3 weeks ago
by Brandon Ferris
0

By Keith Schneider and Donn Goodman

It was a positive week in both the stock and bond markets as investors stepped back in.

Earnings reports in some sectors (financials) were not as weak as some expected, and there continues to be interim cooling of inflation (gas down the past month). Also, Bank of America’s Global Fund Manager survey shows extreme bearish sentiment readings, a contrarian indicator. Growth stocks (especially consumer discretionary and technology) outperformed value (especially energy related stocks, the big winner so far in 2022). It was one of the few good weeks we have had so far in 2022.

As a reminder, in 2007, July hit a new high only to be a precursor of negative things to come (especially in housing). This was the last time we were staring down a possible recession. Many of the negative indicators we explain below were just starting in July 2007. See chart below. 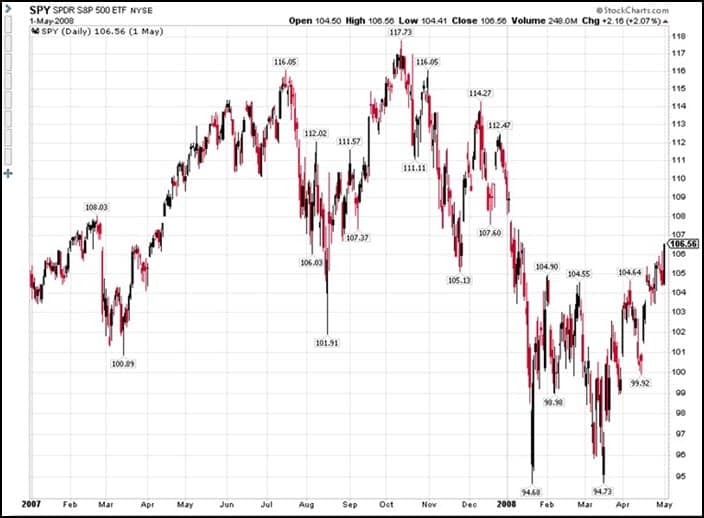 This past week several of the MarketGauge indicators gave early signs of risk on. Mish also caught a few positive trades that her subscribers were able to profit from.

The recent risk on trend stopped in its tracks on Friday as earnings misses disrupted the recent positive bias. SNAP (Snapchat) reported a huge miss in earnings, and investors dumped the stock on Friday (down 39%), and along with it went other social media giants like Meta (-7.6%) and Google (-5.8%). This sector is plagued by the fact that advertisers are retreating from ad spending on these social media channels.

Additionally, communication stocks were hit hard as Verizon (-6.7%) reported a big miss in earnings due to a significant reduction of free cash flow resulting from late paying customers and subscribers leaving for a cheaper alternative.

For the first quarter of 2022, 77% of corporations beat their earnings expectations. In anticipation that this trend would not continue, the market sold off.

For this recent quarter, it is expected that approximately 66% of corporations will beat their earnings expectations and grow earnings by an average of 4%. As we mentioned in last week’s Market Outlook, with the US dollar appreciation over the past year (approximately 20%), we believe that this will be a major headwind for the earnings of multinational companies. We’ve now seen this with JP Morgan and Verizon. We do not believe earnings will grow 4% nor that 66% of companies will beat estimates. This may be the next shoe to drop in the market’s decline.

There are other Warning signs.  Including the following:

WARNING: Slowdown in the Economy

WARNING:  Recession on the Horizon?

WARNING:  We are in a Bear Market

Click here to read more details on all of the Warnings above, and learn what we think may be around the corner.