The ocean is an amazing place. We’ve talked before about how deep the ocean is, but never explored how some of the planet’s largest sea creatures find refuge in the depths below.

However, there are conflicting reports on the largest sea creatures. “Precise, accurate, and quantified measurements matter at both a philosophical and pragmatic level,”  said Craig McClain, assistant director of the National Evolutionary Synthesis Center in Durham, North Carolina. “Saying something is approximately ‘this big’ while holding your arms out won’t cut it, nor will inflating how large some of these animals are.”

In the past, researchers studied well-known giants like the whale shark, mola-mola, and the walrus and others. But opinions still varied on the size of the largest sea creatures. For example, some reports count the Japnese Spider Crab, a crustacean that can grow up to a terrifying 12 feet, while others do not. 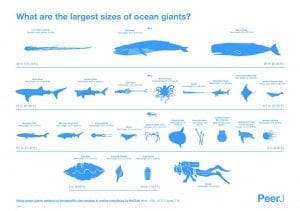 A comprehensive study published in 2015 attempted to answer a pressing question. What are the greatest sizes that the largest marine megafauna obtain? In layman’s terms: what are the largest sea creatures?  It turns out, that is a complicated question to answer.

The comprehensive survey used past studies and verifiable documentation to determine the accurate size of a range of marine animals. This included everything from crabs to whales. Researchers found that many alleged record sizes were significantly larger than anything that could be scientifically validated.

The study breaks down the size by specific categories, so we learn that the largest testudine is the Leatherback Sea Turtle, and that third Largest pinniped is the walrus, and the largest batoidean is the giant ocean Manta Ray.

The researchers released the overarching scientific discussion on size in the ocean.  However, we laymen wanted to see some of the largest sea creatures for ourselves. The video below is NOT remotely scientific. One of the video entries is photoshopped. But, it’s still fun to watch.

How Deep is the Ocean?