Not only an excellent source of healthy, lean protein, mahi mahi is also fun to catch.

I don’t know if there’s a fish in the sea that’s more beautiful when airborne than the amazing mahi mahi. Twisting wildly and shimmering gold with water droplets sprayed in a full arc against a cloudless bright blue sky, it’s a sight I can watch again and again.

Call them mahi, dorado, dolphinfish, or any of a half-dozen other nicknames, they are all one and the same: the unmistakable, irrepressible and iridescent Coryphaena hippurus. From the canyons of the mid-Atlantic to the Florida Keys, Gulf Coast and deliciously warm waters off the west coast of Central America, mention the name in any language and anglers nod their heads with full approval. Some consider them the ultimate offshore gamefish for light-tackle pursuit. I concur.

Lean, mean and able to swim for short bursts at speeds up to 50 mph, mahi mahi don’t grow huge compared to other offshore sportfish, but they do grow exceptionally fast. They can spawn at five months, which they do every four to six weeks to the tune of about 400,000 eggs per session. They’ll weigh more than 20 pounds by age one and 30 to 40 pounds at three years old. Fewer than three percent reach age four, but those that do can weigh 50 to 60 pounds or more. The current International Game Fish Association (IGFA) world record for the species stands at 87 pounds.

A beast of a bull, as big males are known, was caught off
Costa Rica in 1976. That fish, believe marine scientists, was probably no more than four years old. Given their acrobatics, speed and incredible growth rate, it’s no wonder that mahi has a loyal following. They would make a great “everyman’s” fish across their range except for one small detail: Their love of warm water keeps them far off the beach.

Where the Fish Are

In Florida waters, for example, anglers encounter smaller specimens about 10 miles offshore, but the bigger fish tend to hold at least 15 to 25 miles out. Head to the northeast, and the biggest ones concentrate from 40 fathoms (240 feet) on out to the canyons. The investment in time and money to run such distances cause most skippers to focus on tuna and marlin which leaves mahi as a by-catch north of the Carolinas, but they often fill the gaps between bigger bites and can salvage a trip when the big guns refuse to play.

As a rule, mahi tend to follow the Gulf Stream up from the south and try to stay in water temperatures of 75 degrees or greater. As warm-water eddies break off from the Gulf Stream and spin toward the coast, some mahi remain in the hot pockets which bring them closer to shore from the Carolinas to New York. While points south see mahi caught to some degree on a year-round basis, mid-April through early September finds the most intense action. At the northern end of their range, the season can be much shorter running from mid-July through early September.

There are two primary points to keep in mind when seeking mahi mahi: the need for warm water and their love of shadow-creating surface structure. These gamesters also prefer to be near sharp water temperature breaks of two or three degrees because such breaks stack up baitfish schools.

Fish the warm water side of a significant temperature break along a substantial weed line or shadow source and you are on the right track. On the offshore scene, this means looking for lines of drifting sargassum weed, floating logs, a piece of cardboard or timber on the surface, or any other flotsam you can find. Anything that provides a shadow is a potential mahi hot spot. I once found more than two dozen mahi in the thin shadow line of a single, floating two-by-six.

As noted, most offshore anglers try to score mahi while trolling for tuna, sailfish and marlin. Since mahi will smack the same basic lures and baits, especially the smaller ones in the spread, skippers try to bring their offerings as close to lobster pots, buoys, flotsam, or weed lines as possible. The closer the lures swing, the better the odds of hooking up. It’s amazing just how tight and strong mahi will hold to structure.

On one of my first mahi encounters years ago, we were on the troll for tuna in 8- to 10-foot seas a bit shy of Hudson Canyon (off New Jersey). A clear miss on the weather forecast found us with a stinging wind out of the east shearing wave tops. As we pulled our Tuna Clones past a lobster buoy, we slid into a gully and above my head off the starboard side, I actually spotted a mahi holding in place beneath the float. Apparently, like me and my crewmates, he wasn’t in an eating mood, and we soon turned for home.

Although it can take some time to find the perfect mahi water, these fish are generally easy to provoke if you can pin them down. Many captains simply break out a bucket of ground chum and then use little chunk baits or whole small squid hooked once through the top of the mantle while drifting alongside a weed line or structure point.

Southern skippers proficient with cast nets are more likely to offer live pilchards gathered before leaving the bay, while northern captains sometimes try peanut bunker. Trolling is another option, with small chartreuse, yellow or purple Tuna Clones, Jets or similar lures placed on outriggers to tempt the mahi while larger lures are positioned at center-spread in the hopes of calling bigger game up from the depths. Off the New Jersey and New York coasts, tossing white bucktails tipped with small strip baits or small diamond jigs are also common options.

Like most other kinds of fish, mahi have their lockdown days. That’s when it helps to have a couple of extra tricks in
your arsenal. One trick that works when the fish are visible on the troll but simply refuse to respond is to click the reel with the lure closest to the fish into free-spool as it goes past the target. Allow the lure to sink for a few seconds, then kick the reel back into gear. When that lure suddenly pops back to life and powers toward the surface, it’s likely to get blasted. 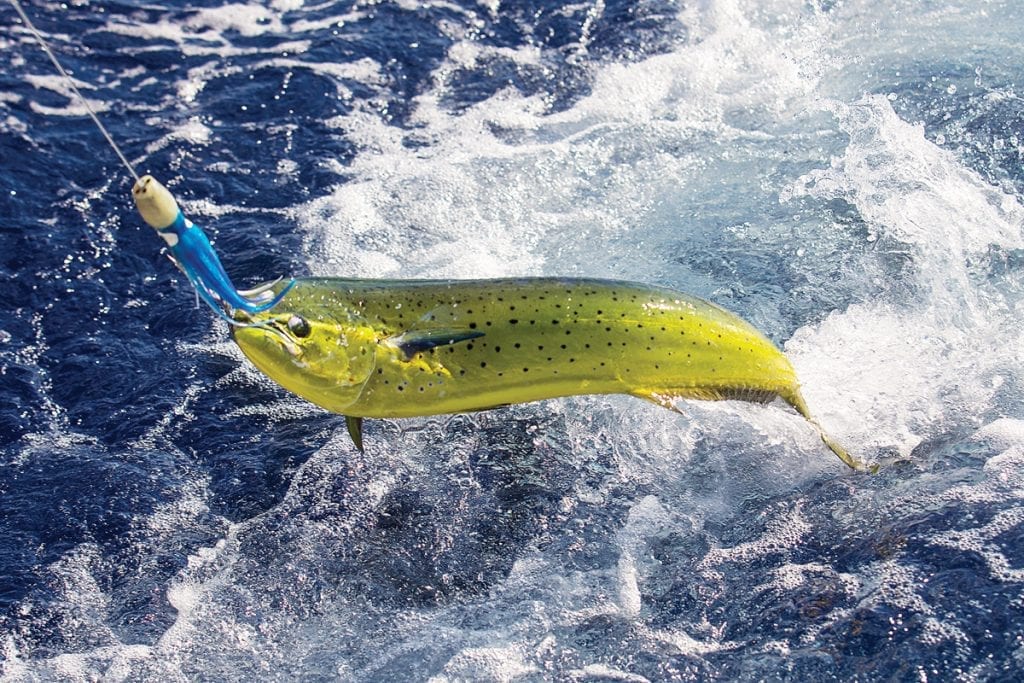 Another trick is to bring along a bucket of the smallest baitfish you can find, such as live killies. Drift in quietly on a school and toss a handful of the tiny baitfish overboard. Then flip a tiny hook baited with a single little baitfish right into the middle of the mayhem. Mahi find the smallest baitfish most irresistible and the bite often fires up instantly with this tactic.

Keep in mind that because mahi tend to school by size, what you see is what you get when targeting these feisty speedsters. If you set up on a pack of smallish fish and want bigger ones, keep looking. One spot may hold five-and six-pounders, the next 10- to 12-pounders. The biggest mahi, those topping 25 pounds, tend to be loners or are found in small pods.

There is one last trick that mahi experts like to use that is worth considering: leave the first mahi hooked to struggle a few feet behind your drifting boat. As long as that fish keeps swimming, the rest tend to follow. When the school finally begins to break apart, reel in your decoy and return to your starting point or simply move on to cover new ground.

What’s in a Name?

There’s no shortage of names to describe the savory and acrobatic mahi mahi. Dorado is Spanish for golden. The term dolphinfish probably comes from the early classification of the species in the genus dolfyn. Large males, known as bulls, have huge foreheads. Meanwhile, small fish that weigh five pounds or less are chicken dolphin. Mahi mahi, a name that has risen to the top of the rung in recent decades, means “very strong” in Hawaiian, yet another place where these tasty treats are loved both in the air and on the plate.