How to decide the best option for your boat engine?

Different boat engines require different fuels, and as a boat owner, you may be able to choose between a number of options at the pump. Use the wrong fuel, however, and you could end up doing irreparable damage to your boat’s engine as well as its fuel tank. Let’s go over the basic types of fuel you might find when filling up and which ones to use and, more importantly, not use.

Chances are you’ve heard of E15, and it’s becoming more and more popular. But this is the one fuel that you do not want to use to fill up your tank. Most engines built over the last 20 years can and do work with E10 fuel, so it isn’t a surprise that boat owners might believe that E15 will work with their engine as well. Unfortunately, this is a common misconception that can ruin a boat’s engine.

Even the Environmental Protection Agency (EPA) advises against the use of E15 in boat engines. In fact, they’re so worried about it that they’ve forced companies to submit a Model Misfueling Mitigation Plan that must be approved before they can begin selling E15 at their stations.

What will happen if you put E15 in your boat’s engine or fuel tanks? E15 is made up of 15 percent ethanol, and ethanol can be highly corrosive. You’ll end up with deteriorated components and clogged fuel filters. Use the fuel long enough and it will result in fuel leaks and damaged fuel tanks. This is not only harmful to your boat, but it’s also dangerous to the environment. Many trailerable boats are filled up at the gas station, where E15 and now E85 are available and are designed for later-model automobile engines. Make sure to grab the right pump, E10 only, which may not be the same you use for your new truck.

So what type of fuel should you put in your boat? This will depend on your boat’s engine, but here are the main options: 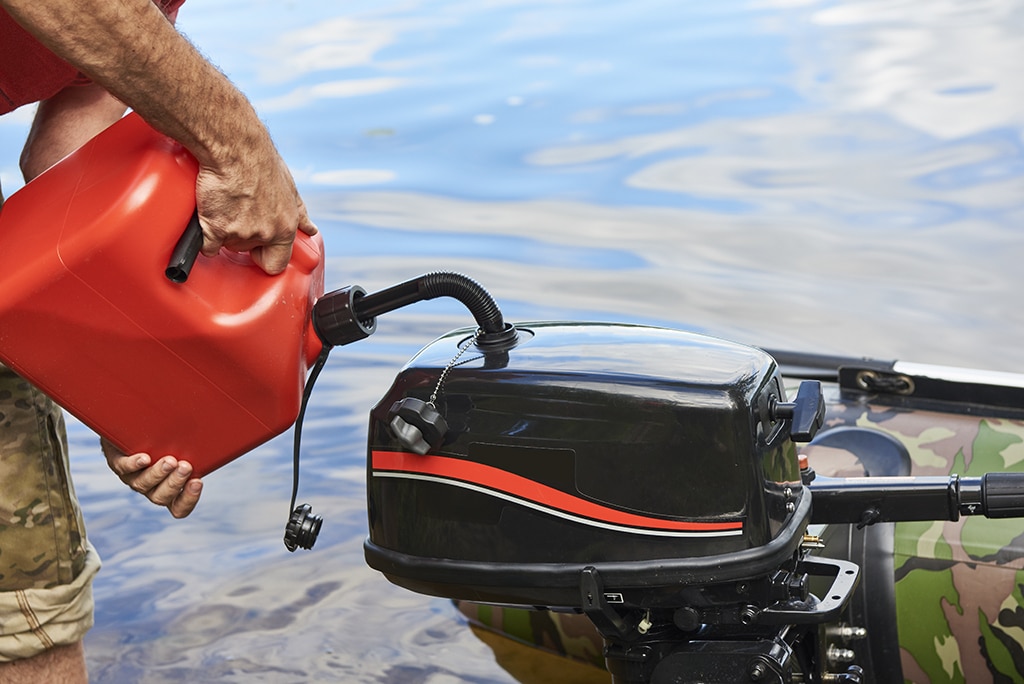 While there are some new diesel outboard engines on the market, these are rare and your outboard is likely to be a gas engine. On the other hand, if you’ve purchased a larger boat with an inboard motor, you may find yourself with an engine that requires diesel fuel. Diesel fuel is more expensive, but it’s also more efficient. The engines that this fuel powers usually offer much higher torque and horsepower. On top of this, diesel engines tend to be more robust than gas-powered engines so you should get more life (and years) out of them.

Ethanol-free gasoline does not come with the corrosive effects that gasoline with ethanol has; however, it is more expensive and can often be hard to find. Also, this fuel should not be used in an engine that has been using E10 fuel. The reason is that ethanol-free fuel uses the chemical additive methyl tert-butyl ether (MTBE) as an octane enhancer and to fulfill the oxygenate requirements set by Congress for the Clean Air Act but is now banned in some states. This additive, when combined with ethanol, can lead to clogged fuel filters.

When E10 fuel was first introduced into boat motors, it did not do well. This was partially attributed to the fact that E10 was being mixed with MTBE. There were other problems as well, but the main reason was that boat engines just weren’t designed to run on E10 fuel.

Fortunately, this is no longer the case, and E10 is safe for most boat engines. This being said, I’d advise all boat owners to check their owner’s manual before putting any fuel in their boat’s engine.

E10 is currently the easiest fuel to find. It’s also the least expensive, viable fuel that you can use in your boat. Most boat owners who have gas engines will probably use E10 fuel, including those who used ethanol-free gas in the past. When making the switch, be sure to completely remove all of the old fuel from the tanks and the engines, and clean them as well. Taking these steps will greatly reduce the chances of clogged fuel lines and other engine troubles.

Many boat engines require a special mixture of oil and gas. The oil that is added to this fuel mixture helps lubricate the engine’s moving parts and makes the engine run smoother than a gas-only fuel.

The oil and gas ratios for each engine will vary so check your owner’s manual before creating these mixtures. Choose marine oil for this mixture to get the best performance and longest life out of the engine.

At the end of the day, boat fuel types aren’t too complicated. Read the owner’s manual, and you shouldn’t have any trouble choosing the right fuel for your boat.