The Outer Banks of North Carolina are a string of barrier islands jutting out into the Atlantic Ocean. Beyond them are the treacherous waters of “The Graveyard of the Atlantic,” where many a ship has floundered. Numerous lighthouses were built to help mariners navigate the dangerous passages, but through time and the use of modern navigation technology, many lighthouses no longer serve as the primary navigational aid. Yet, they still stand as a reference to warn boats of dangerous area. Every lighthouse is unique and painted differently so boaters can identify each one and know their location to use as a daymark. At night, each working lighthouse has a distinctive light sequence as its identity.

Many lighthouses have been restored and are open to visitors who can climb to the top and get a bird’s eye view of the surrounding area. Typically, there is a fee for this which is used for preservation and upkeep. Keep in mind that the lighthouses are often closed in the winter, so check ahead to see if and when you can visit. 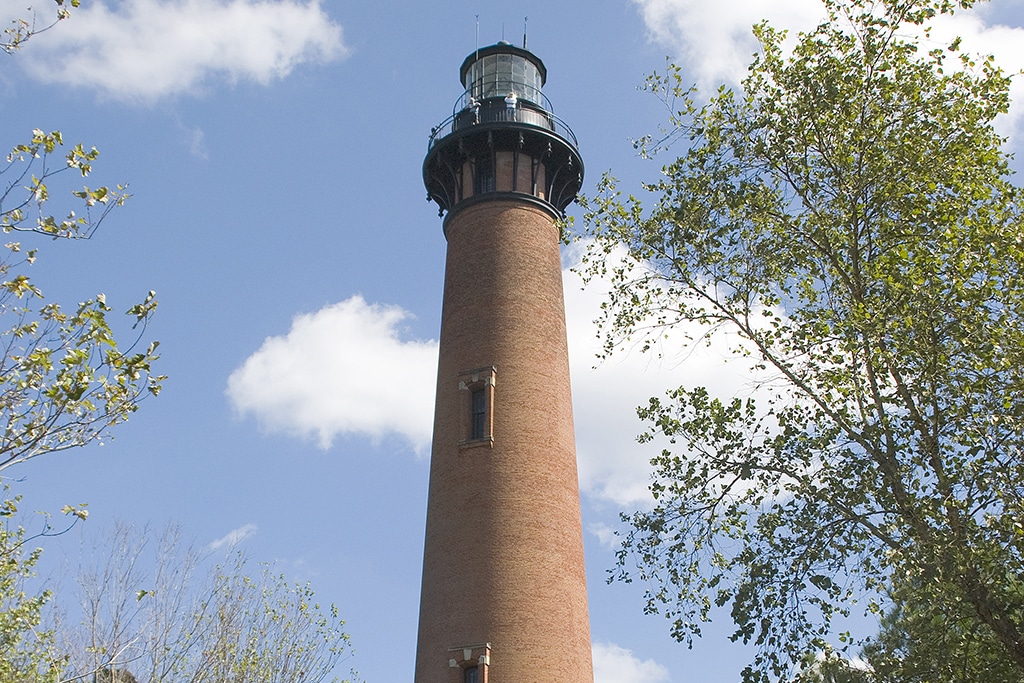 The farthest north of the lights is the Currituck Beach Lighthouse in Corolla. An impressive red brick tower rises 162 feet above the ground. The 220 steps are considered a relatively easy climb with numerous landings to stop and rest. Along the way, you’ll see exhibits that tell the lighthouse’s history. From the top, you’ll have great views of Currituck Sound, the Atlantic Ocean, and the northern Outer Banks.

Completed in 1875, Currituck was the last major brick lighthouse built on the Outer Banks. It was left unpainted to make it different from the other lighthouses. The lighthouse is situated among many restored buildings, one of which has been converted into a gift shop. The surrounding grounds are known for their scenic beauty.

The Bodie (pronounced “body”) Island Lighthouse is just south of Nags Head. At 156 feet high and with prominent black and white horizontal stripes, the Bodie Light is a striking feature. After earlier versions failed, this structure was finished in 1872. The lighthouse was open to the public in 2013 after an extensive renovation. Climb the 214 steps to the top and you’ll be rewarded with glorious views of Pamlico Sound and the Oregon Inlet. The keeper’s duplex is also restored and houses a gift shop, ranger office, and visitors center.

One of the unique features of the Bodie Island Light station is that it is surrounded by ponds and wetlands. Boardwalks lead visitors to observation stations to catch a glimpse of birds and other wildlife. 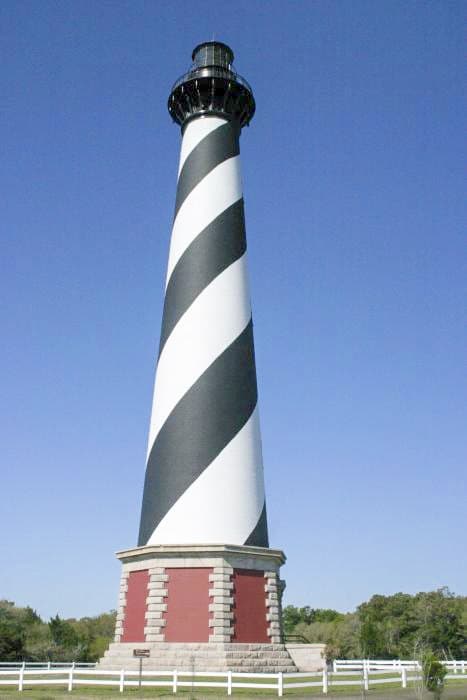 The most famous of the Outer Banks lights is the Cape Hatteras Lighthouse located in Buxton on Hatteras Island. After earlier lights were deemed too short and not effective, a new structure was completed in 1870. At 208 feet tall, the Hatteras Light is the tallest lighthouse in the United States. The great height and visibility were deemed necessary because sea conditions just offshore make this area one of the most notorious for shipwrecks. The distinctive black and white diagonal stripes were added in 1873.

The lighthouse is open to the public, and the 269 steps traversing the 200 feet of elevation make this a challenging climb, especially in the heat of summer. As a reward, you’ll get great views of Hatteras Island, Pamlico Sound, and the Atlantic Ocean. Nearby, there is a visitor’s center and museum.

In the 1900s, beach erosion continually threatened the structure. When all efforts to stop the encroaching ocean failed, the entire lighthouse was moved 2,900 feet over 23 days in a monumental engineering feat in 1999, and is now well back from the water. 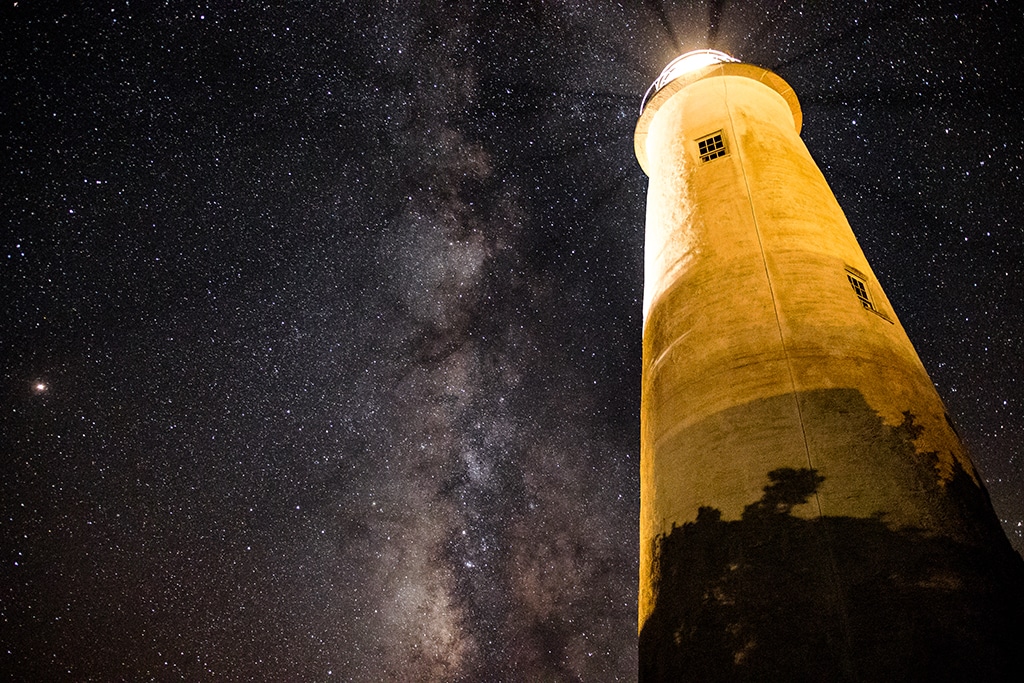 The Ocracoke Lighthouse is located on Ocracoke Island and is the southernmost of the Outer Banks lights. There are no bridges to the island. Ferry service is available from Hatteras Island to the north and from mainland North Carolina to the south.

The Ocracoke Lighthouse opened in 1823 and is now the oldest operational lighthouse in North Carolina and the second oldest in the nation. The lighthouse is in a unique setting—a residential area on only two acres of land. It is within easy walking or biking distance from many locations on the south end of the island.

Unfortunately, the lighthouse is not open for climbing and there are no visitor facilities on site. Parking is extremely limited. You are, however, welcome to visit and take pictures. At only 75 feet tall, this is the shortest of the Outer Banks lights, but its pure-white exterior makes it a striking landmark. The short stature was all that was necessary to safely guide mariners through Ocracoke Inlet and into Pamlico Sound. 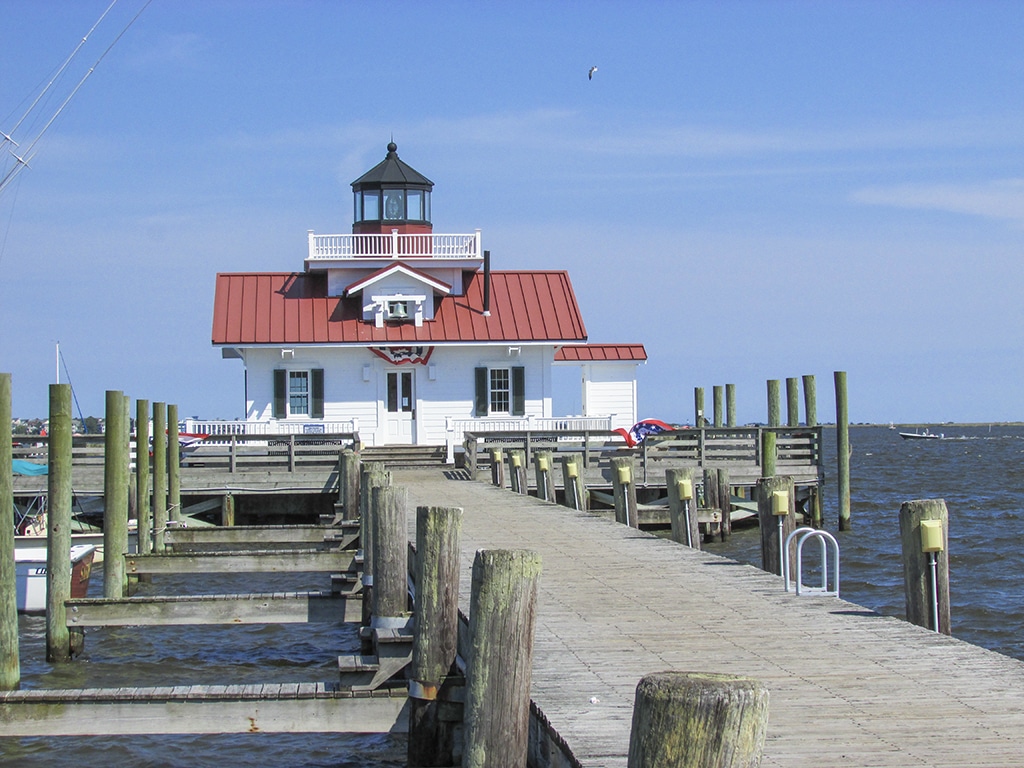 In the small town of Manteo on Roanoke Island, you will find the most unusual of the Outer Banks lights, the Roanoke Marshes Lighthouse. The original lighthouse was established in 1831 and was used to guide nearby ships into Croatan Sound; therefore, great height wasn’t necessary for visibility. Destroyed and rebuilt several times, the last working light was opened in 1877. Decommissioned in 1955, the structure was lost in an ill-fated move. The current light is a replica of the 1877 lighthouse. Finished in 2004, it’s only 37 feet tall and can be found at the end of a short pier jutting out into Roanoke Sound. outerbankslighthousesociety.org

Yellowfin Tuna in the Gulf