Keep an eye on your engine’s cooling system.

Recently I had both inboard diesel engines of the boat I was delivering dialed in at 2200 rpm and moving along at a comfortable speed. My feet were up, my back was settled into the pedestal chair, and I was enjoying the ride as I made my way to the marina at a slow bell when the starboard engine alarm went off. The rpms on the state-of-the-art, electronically controlled engine quickly went from 2200 to 1500 and then to complete shut down. Bringing both throttles back to neutral, I noted a spike on the digital temp gauge and instantly wondered what could have gone wrong from intake to exhaust and everything in between.

I checked the expansion tank’s coolant cap, water pump, the various hoses, clamps, and exhaust riser before taking a look at the raw water sea strainer. After unscrewing the lid, I detected bits and pieces of thin plastic.

I got away lucky on this one. The source of the problem was a small plastic bag. I shut off the thru-hull intake, removed the hose, checked the impeller, and cleared the residue. Problem solved—a much better outcome than a catastrophic engine failure. To keep your system running cool, let’s first look at the operation of an outboard engine.

“The cooling system is quite simple,” said Mike Nimmer, Mercury Marine’s product service manager. “Powered by an impeller in a water pump, raw water—whether it is salt, brackish, or fresh—comes in through the lower unit, is forced around the powerhead and then leaves the engine via the exhaust. No water coming out of the tell tale is a sure sign something is wrong.”

Much like my experience, the protocol on an outboard is first, when noticeable change in operating temperature comes into play, to shut down the engine. (With multiple engine configurations, when possible, get back to the dock before checking things out.) Lift the lower unit out of the water and check the intake port. If it is clogged or shows signs of debris, clear it. Lowering the engine back down and a quick start will confirm if that was the problem. “If not,” says Nimmer, “it’s time to have a look at the water pump and impeller.” 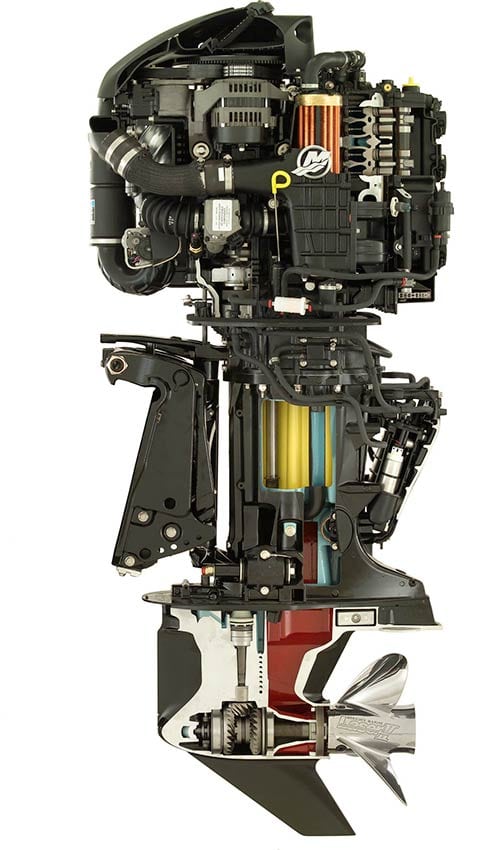 Be familiar with your engine manual and know the correct procedure for doing this kind of maintenance. “If you pull that impeller out, you’re most likely going to need to put in a new one so always carry the right spares,” Nimmer said. While impellers are quite robust, if you operate your engine(s) in areas of shallow water, this can often result in sand or other debris entering the system, so check yours on a regular basis. “If you store your engine over a season, put in a new one before you launch again,” suggests Nimmer. This is also a good time to check the seal on the water pump.

A problem with the engine’s thermostat and relief or bypass valve can also cause overheating. Pre-set to a factory determined setting, this device regulates water temperature to cool the engine, while keeping the proper pressure in the system for proper transfer of generated heat.

If any debris or corrosion is present, the thermostate should be swapped out. Your engine owner’s manual will detail this simple operation. “Never run your engine without its thermostat,” warns Nimmer. “It’s designed to protect and without it, severe damage can occur.” And regardless of what kind of water you boat in, Nimmer recommends you freshwater flush your engine after each use.

Inboard diesel or gasoline boats both have closed, expansion tank systems and raw water cooling with important maintenance items to be observed.

Know the proper operating temperatures of your coolant levels and manifold at various rpms. A difference of a few degrees can indicate trouble. Check with your owner’s manual for this information as well as your own daily maintenance log. (If you don’t keep one, now is a good time to start.)

Knowing the flow amount of your exhaust water is also key to confirm problems with your cooling system—as a boat operator, you should know this by sight. Should you see any restricted flow, shut the engine down and starting at the thru-hull, work your way through the system. A ruined impeller—a major cause in many cooling system problems—can send rubber pieces into the heat exchanger. If you run gasoline engines, you most likely have cast iron risers. As these are quite prone to corrosion in salt water, make checking them part of a seasonal inspection.

Besides the usual suspects such as the water pump, seal, belt, and impeller, follow the hoses, look at the clamps, and make sure the expansion tank cap is on properly. If this hasn’t been done in a while, take the fittings off the heat exchanger and check for clogs and marine growth. If any are present, clear things out with a thin wire brush. It is also a good idea to use an engine flushing product such as Barnacle Buster at least once a season. And use the correct antifreeze as per your engine manufacturer’s recommendations.

With cooling problems the heat generated can ultimately ruin an engine. Carry spare impellers, pre-cut hoses, clamps, the correct antifreeze, and the proper gaskets, grease, and tools aboard before setting out. I also like to have a full roll of self-fusing silicone tape in my toolbox—it can provide a great quick fix for a leaking hose until you get back to the dock. And don’t forget that all-important owner’s manual.

If you suspect something is wrong it’s time to shut it down. And if you’re not up to the task, get your marina manager on the phone or seek out a reputable mechanic to get the job done

Catch an air show from the comfort of your own boat.