When you install LED lights on your boat, you’ll boost the mood and lower your bill.

Light-emitting diode (LED) lights became popular in the early 2000s. Since then, prices have dropped and efficiency has increased. Today, more boat owners are switching over to LED lighting as their old incandescent and halogen bulbs burn out. Here’s how to install LED lights on your boat.

Leave it to the pros…maybe

While it makes sense to convert to LEDs, boaters should think about whether the job is DIY or one for a marine service professional.

“As simple as lighting sounds, it really is what you cannot see powering and controlling the lights that make every boat different,” explains Bobby Stone, vice president of DRSA in Riviera Beach, Florida. “For example, a sixty- five-foot Viking is completely different than a forty-foot Marlow. In most cases, the Marlow runs off a battery bank with an inverter, and the Viking has generators plus a few DC circuits.”

An electrical professional can determine the condition and layout of the wiring, input power specifications, check if transformers are in line, and how to install new switches, dimmers, or LED power supplies.

“If simply replacing the existing halogen or incandescent bulbs to LED, end users can do this themselves without requiring a technician,” says Petro Ploumis, president of Apex Lighting in Deerfield Beach, Florida. “We can either just sell the LED lights to the customer, or we can go on the boat to make a design plan and provide the installation as well. It all depends on what the customer wants and the planned budget.” 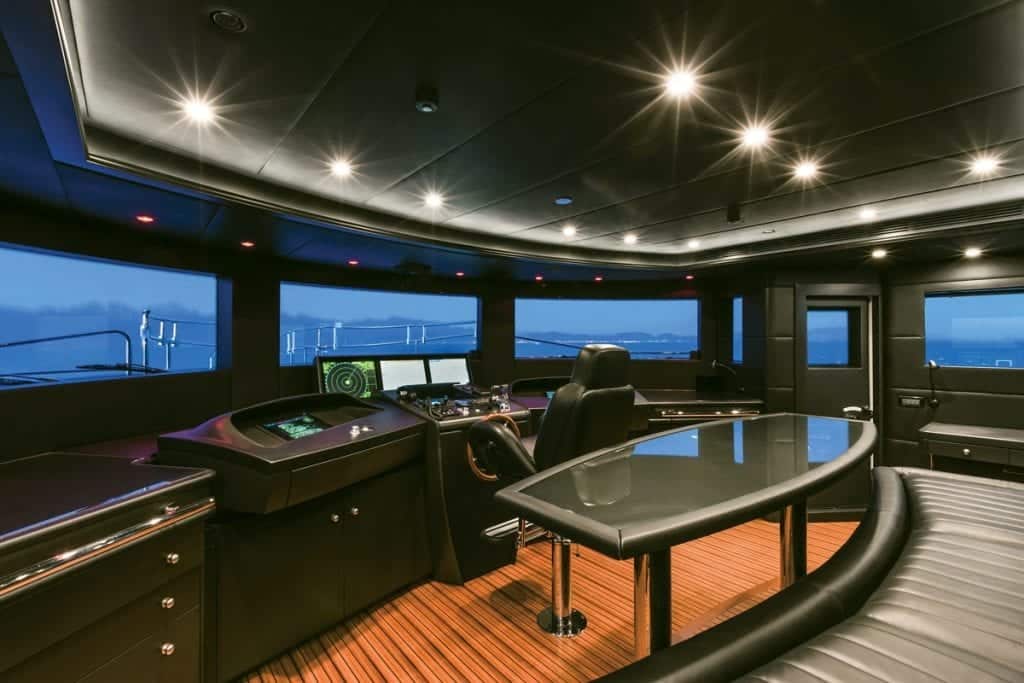 There are multiple factors to consider when selecting LED lighting. Those include light color temperature (Kelvin), desired light output (Lumens), dimming (if the bulbs or fixtures are replaced with LED lights and require dimming, an LED dimmer is necessary). Stone adds that the most common problem many people don’t realize is the low-voltage AC power going to their lights. They assume that because the voltage is 24V, it must be 24VDC. Some older boats have toroidal transformers that step voltage down from 120VAC or 220VAC to 12VAC or 24VAC. While there are LED products on the market that are sold as 12VAC or 24VAC, most will not last long-running at low-voltage AC. The components required to allow the LEDs to operate properly (rectifiers) are usually poor quality or not able to fit the smaller G4 LED bulbs on the market.

Another factor is if the boat has a lighting control system such as Lutron or Crestron. Consider a professional review to determine if additional control components are necessary in this case.

Ploumis divides a lighting installation into three categories: Starter, Midrange, and All the Way.

“For the Starter, if the existing light fixtures are not very old and in good condition, we often recommend simply swapping out the halogen bulbs to LED,” he says. “This is as simple as replacing a burned-out halogen bulb and will typically cost around fifteen to twenty dollars.

“For the Midrange, you could remove the old fixtures and replace them with the same dimension LED versions,” he says. “This involves pulling down the old lights and splicing in the new lights. Each fixture will usually cost around seventy to one hundred-and-twenty dollars each.

The energy savings, lower heat output, better light output, lower maintenance costs, and desired “wow” effect help the customer determine the value of converting to LED. For a 40-foot cruising vessel, the All the Way costs range from $5,000 to $15,000. However, that depends on the lights and options. For an 80-footer, the costs could be as high as $30,000. Generally, underwater lighting installations should be done by a professional.

“Seamless automation for LED lights is getting more popular,” says Ploumis. “In the past, each brand of LED lights needed its own proprietary dimmer or controller. Slowly, companies are coming out with controllers that can control all your lights seamlessly, just like home automation or systems in modern cars.” Yes, there are apps for that.

But, here’s a final note of caution when purchasing LED bulbs or light fixtures for marine applications. Consumers can find a multitude of options and prices online, so be aware that not all LEDs are the same. Not all can tolerate the fluctuations in voltage with a typical marine electrical system. A marine-grade LED bulb is rated and designed to handle voltage fluctuations up to 30VDC. Electronics on the circuit board incorporate rectifiers, capacitors, and DC-to-DC converters to protect the LED diodes.

“Carefully review all specifications before you buy,” says Stone. “In addition, not all marine electricians are experienced in LED conversions. Take care in selecting a qualified  technician for your installation.”