Red snapper, delicious, but also heavily fished, is the now the focus of an innovative federal and state collaboration.

Since 2018, all five Gulf states manage red snapper fishing for private vessels not just in state waters, but also federal.

NOAA Fisheries has issued Exempted Fishing Permits for each state to set its own private vessel angler season dates, collect landings data, and then close the season if and when its red snapper quota is reached.

Tasty red snapper is one of the most sought-after fish in the Gulf of Mexico, so fisheries managers carefully watch the populations of this deep water reef fish. NOAA Fisheries has set the 2019 red snapper season for recreational charter boats fishing federal waters 12 miles out.

The “For Hire” season starts June 1st and lasts for 62 days. You can only keep two, and they have to be at least 16 inches long. If you want to be in the loop, sign up for text message alerts.

For recreational anglers, individual states manage the red snapper seasons and other regulations for both state and federal waters. Each state is different. 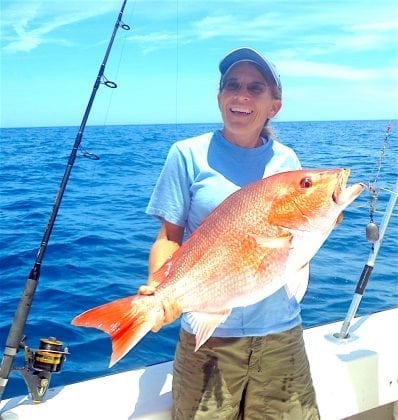 A Red Snapper Count in the works

Increasingly vocal pushback, especially from recreational anglers, has led to the award of
an in-depth, $12-million research initiative to accurately determine the abundance of red snapper in U.S. waters of the Gulf of Mexico with a red snapper count.

An independent review panel convened by the Mississippi-Alabama Sea Grant Consortium has picked a team of 21 scientists from universities in all five Gulf states. Their research will be coordinated by Greg Stunz, Marine Biology Professor at Texas A&M-Corpus Christi and a voting member of the Gulf of Mexico Fishery Management Council.

The project has enthusiastic support from the person on top of the federal fisheries management pyramid, Secretary of Commerce Wilbur Ross. It is also supported by Senator Richard Shelby of Alabama who chairs the appropriations subcommittee on Commerce, Justice, Science, and Related Agencies. Shelby said he hoped an accurate red snapper count in the Gulf could be determined “once and for all.”

Anglers will tag red snappers and report numbers and locations of previously-tagged snappers that they catch. Commercial fishing vessels will host observers to count fish brought aboard and their locations. Other on-the-water research tools will include remote-operated vehicles, camera sleds, scuba divers, and acoustics.

Art Festivals in the Gulf

The Battle for Mobile Bay

The Battle of Mobile Bay