Due to its sheer magnitude and velocity, the tsunami is one of the most destructive forces in nature. From the Japanese words for “harbor wave”, tsunamis are actually a series of waves whose crests can be tens or even hundreds of miles apart. When this huge mass of water hits a coast, it can plow inland for miles like a raging river that can be over 100 feet high, and it can destroy everything in its path.

Unlike wind-driven waves or astronomically driven tides, tsunamis are the result of geological activity under the ocean floor, some movement that will cause a displacement
of a large amount of water, such as underwater landslides or volcanic eruptions. But the most significant tsunamis are caused by sudden movements of the sea floor associated
with earthquakes.

In the deep open ocean, a surface tsunami wave may only be a few inches high. But unlike other ocean waves, a tsunami wave extends downward to the ocean floor. This is
a tremendous mass of water, and the wave can be traveling at remarkable speeds of up to 500 mph. As it approaches a coastline and the water gets shallower, the wave slows to 20 or 30 mph; the water piles up, causing a significant rise in ocean level. When it reaches the coast, a tsunami seldom appears as a towering wave but rather like a fast-rising flood.

On average, locally damaging tsunamis occur twice a year, but major tsunami events that can affect areas hundreds or even thousands of miles away from the origin point only
occur about twice per decade. Since 1900, the seismically active Pacific basin has seen nearly three-quarters of all tsunami events. Less than 10 percent occurred in the Atlantic
and Caribbean. 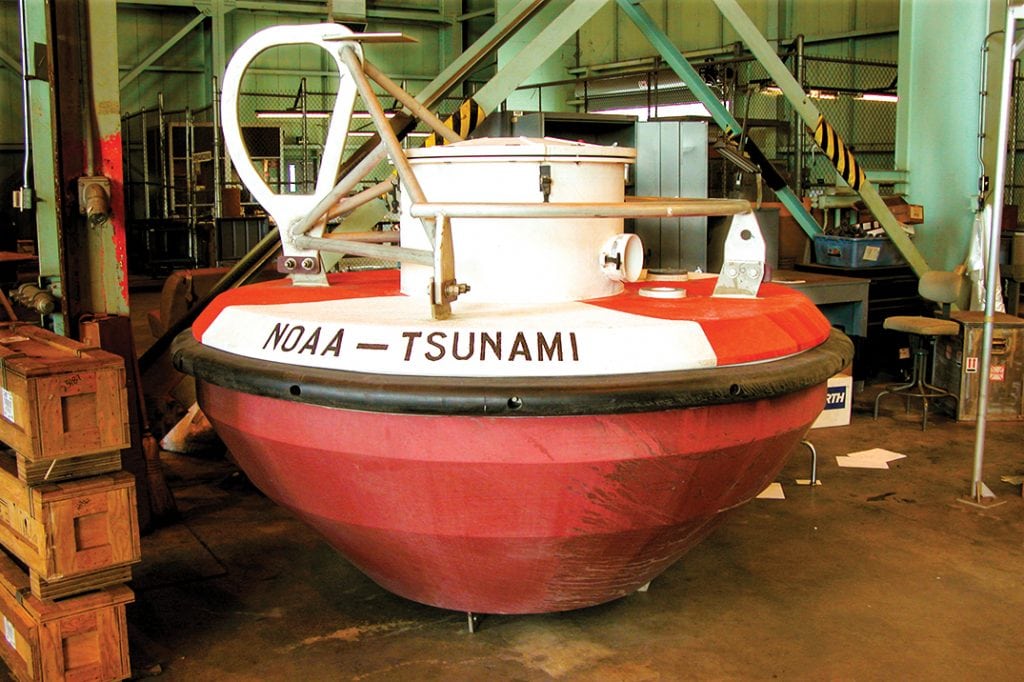 In this millennium, there have been two historic tsunami events. In December 2004, a 9.1-magnitude earthquake off the Indonesia coast initiated tsunamis that killed 250,000 people some as far away as the east coast of Africa. Japan suffered devastating tsunamis that killed 18,000 people after a 9.0 earthquake hit in March 2011. The water traveled as much as six miles inland.

The US Tsunami Warning System run by the National Weather Service protects the citizens of the United States and its territories. There are two Tsunami Warning Centers. The one in Palmer, Alaska, serves the continental U.S., Alaska and Canada. The other in Honolulu, Hawaii, serves not only the Hawaiian Islands and U.S.-owned territories in the Pacific but also on the Atlantic side, Puerto Rico and the Virgin Islands.

To detect actual tsunamis as they are moving through the ocean, NOAA developed the Deep-ocean Assessment and Reporting of Tsunami (DART®) station which consists of a bottom pressure recorder anchored to the sea floor and a moored surface buoy with a transmitter to send information via satellite back to the Centers. The pressure sensor can convert a measured reading to the height of the ocean surface above, and if the system detects an unusual height, it will start sending readings every 15 seconds.

With the greatest tsunami risk in the Pacific region, the DART network of stations runs the length of the Aleutian Islands and southern Alaska as well as along the West Coast and Hawaii. Although the Atlantic is much less prone to tsunamis, there are stations off the East Coast, in the Gulf and off Puerto Rico where meteotsunamis tend to occur. With accelerated development along many coastlines and rising sea levels, future tsunami events could be catastrophic.

When seismic data indicate that a significant earthquake has occurred somewhere around the world, an Information Statement is issued immediately by the appropriate Warning
Center. Next, the nearest sea level gauges are closely monitored to see if a tsunami has been generated and its magnitude. The DART network will activate if a tsunami is approaching. If a tsunami has the potential to affect a covered area, there are three levels of alerts that can be issued by the appropriate Center:

Tsunami warnings are just one part of the National Tsunami Hazard Mitigation Program which includes agencies of the Federal government and 28 U.S. states and territories. Another component, Mapping and Modeling, uses computer analysis of possible tsunami events in conjunction with local topography to forecast the magnitude of potential flooding. The Mitigation and Education component is the public outreach to inform citizens of the tsunami risk in their area and what actions should be taken in response to the various advisories. To lessen property damage, land use policy and planning are also advocated.

ALL PHOTOS: COURTESY OF NOAA