A World of its Own

The colors of Harbour Island

Featured in all the renown travel magazines and television shows, and referred to often as “the Nantucket of the Caribbean,” the island dates back to the 1700s. The old wooden, pristine houses emulate the architecture of the Carolinas, from where the early Loyalist settlers originated, their dates proudly displayed on doors and gates.

A must for any cruiser landing in Harbour Island is to walk the town’s old streets. People here are really friendly and willing to offer information or to help find your way. Unassuming shops are worth investigating for local produce—those bananas may not look as pretty, but I bet you’ve never had one taste so sweet. Narrow streets adorned with cascading colors of bougainvillea are traversed by golf cart as the major form of transport. Harbour Island (spelled the British way) was one of the original settlements of the archipelago. Its waters became too shallow on the sheltered western shore and eventually lost its “natural harbour” title to deeper New Providence years later.

Cruisers have several choices of approach to the island. Departing the Florida coast, boaters head eastward to clear Bahamas Customs at the closest Port of Entry, namely Bimini, Cat Cay, and Great Harbour Cay in the Berry Islands, or Freeport, Grand Bahama, for the more northerly approaching boaters.

The Bahamas, believed to have originated from the Spanish bajamar, meaning “shallow water,” require careful navigation. The deep indigo waters to the north of Eleuthera indicate depths between 3,000 and 10,000 feet and offer safe passage for deep-draft yachts, which is limited quickly when heading inside to Harbour Island, primarily to yachts 180 feet in length with a 10-foot draft.

The passage begins in neighboring Spanish Wells, where captains unfamiliar with the approach can hire a knowledgeable pilot to guide them through The Devil’s Backbone, a shallow, very intimidating reef that demands sailors to hug the shoreline, past Preachers Cave, turning along Tay Bay Beach, and into the bay protected by barrier islands, including Harbour Island, and that’s on a calm day. 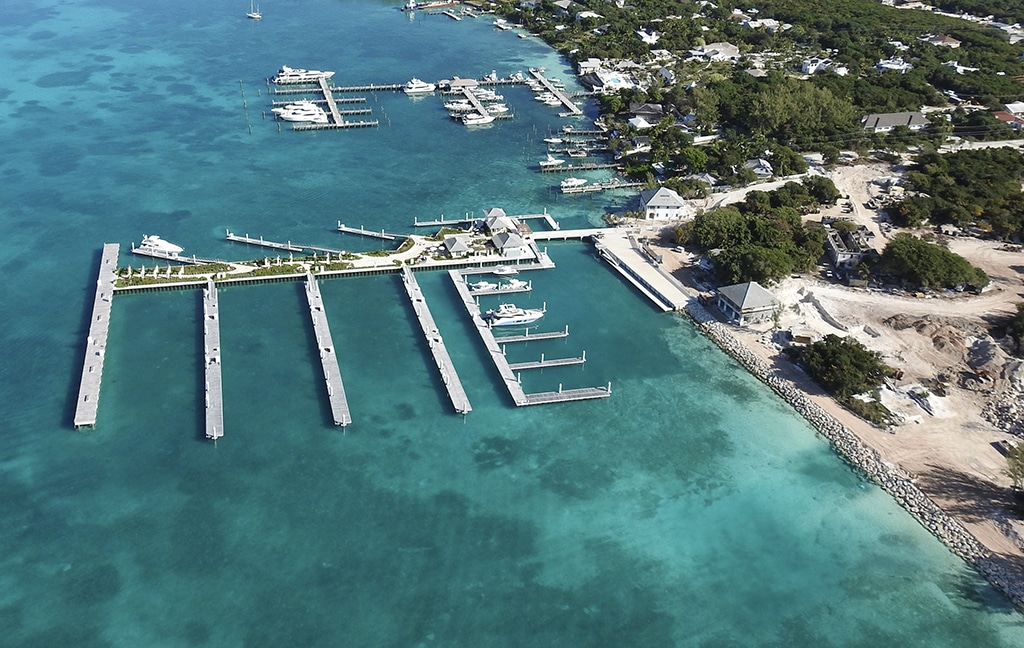 The harbor at Dunmore Town becomes visible as one rounds the eastern point of Eleuthera where three marinas offer great dockage and all the necessary facilities, such as water, electric, and pump-outs: the Romora Bay Resort and Marina, Valentines Resort and Marina, and the soon-to-be-completed Briland Club Marina. The new Briland Club boasts massive generators that supply enough voltage to their docks so running generators while docked isn’t necessary. Romora Bay Marina, as with Valentines, can host as many as 50 yachts up to 200 feet long. At both ends of Harbour Island there are anchorages to throw the hook; however, the seabed only allows about a 10-foot draft. 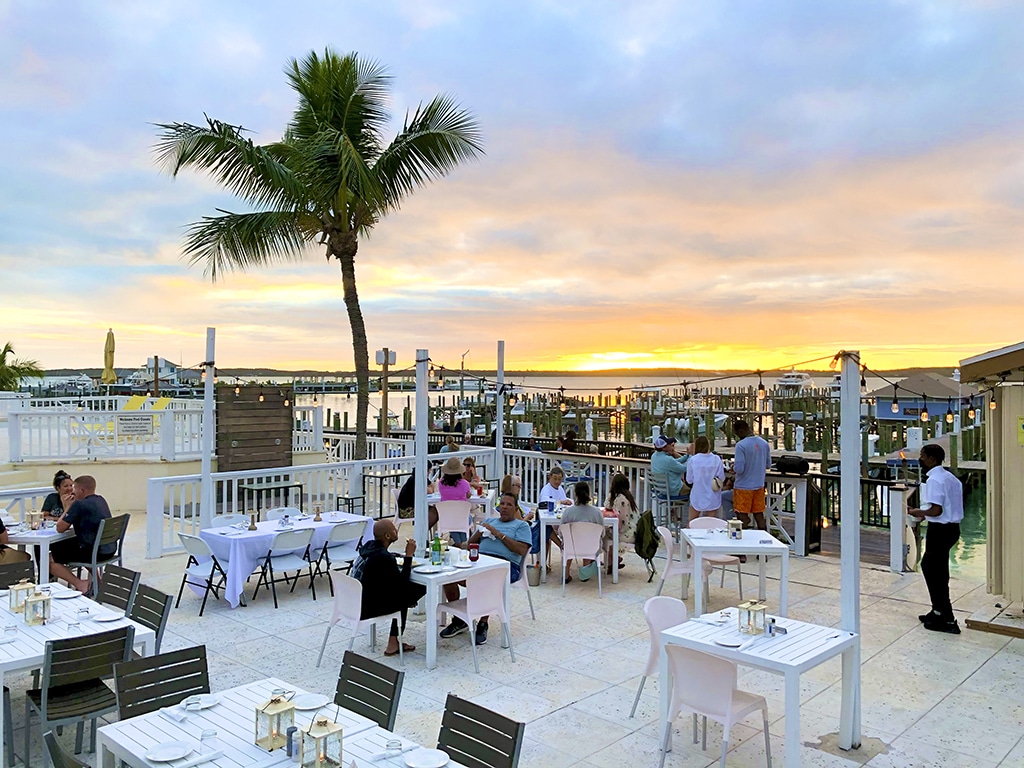 Along the downtown waterfront, aptly named Bay Street, a row of colorful cottages beg to be photographed. They’re always immaculately painted, stand among impressive coconut palms, and are complete with picture-perfect picket fences. Exploring on foot is really rewarding. Pique your curiosity walking down side streets to find hidden treasures, see a golf cart brimming with local dogs being delivered home after a communal walk, or observe grandma with her grandkids on Sunday superbly dressed walking the narrow streets on the way to church.

Bahamian birding here is a wonderful occupation for those patient enough to explore the coastline. A row of sleeping greater yellowlegs, elegant great egrets perching on the old boats in the harbor, and an occasional green heron skulking through a mass of old conch shells hunting his breakfast provide some really wonderful frames for the photographer.

Early mornings we walk the docks, steaming fresh coffee in hand, and spot juvenile green turtles skimming the surface, taking an occasional breath to then dive to the grass beds below. A yellow-crowned night heron stands absolutely motionless on the rocks waiting for its prey to venture close enough. Laughing gulls provide the soundtrack of the island together with a competing crowing rooster while mockingbirds fill the streets with song.

We never miss the spectacular sunsets for which Harbour Island is famous. A welcome tradition is for visitors and locals to meet on the western side of the island for an ice-cold local beer and marvel at the collection of creatures mixing together on the low tide shoreline. In one scene, puppies, cats, chickens, and water birds are all busy taking no notice of each other. A low ebb offers a fun walk at the far end of Bay Street and across the vast sand flats for a selfie by the old dead tree, used for many a magazine modeling shoot.

Walking through the enchanting town or even the mile across the island, you’ll find amazing restaurants serving local fare. Bring a good appetite to Runaway Hill or The Dunmore with impressive menus that feature a variety of meats and seafood to delight any palate. Don’t miss The Landing for a decadent breakfast, like Ricotta Hotcakes with honeycomb butter and banana. 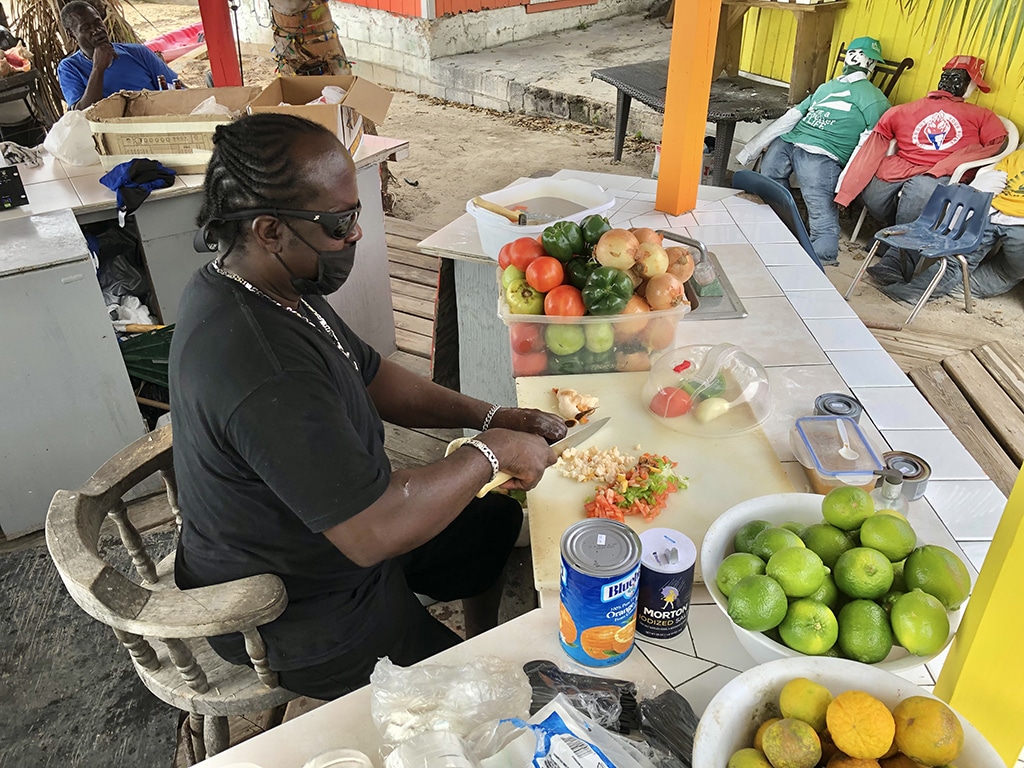 Next to Valentines is a wonderful coffee shop called Cocoa’s, a worthwhile stop for a more casual breakfast or an afternoon treat from hiking the island. Summer months are hot in Harbour Island and iced coffee is a welcome refreshment. We would be remiss not mentioning the fabulous fresh conch salad made to order right in front of you by Marty, better known as “King Conch,” located on the waterfront near the Government Dock.

Waters around Harbour Island are pristine, famous for deep sea fishing on the “outside” where all the big game fish run during their respective migrations through the archipelago. During their seasons, fresh catch of the day are plentiful in all the local restaurants. Grouper, hog snapper, and mahi-mahi are always popular.

So Much to Do

Horseback ride on the beach or fly-fish for the elusive bonefish. Coral reefs set in a crystal-clear ocean are an amazing treat for the avid snorkeler or scuba diver with the best locations found on the ocean side of the island. Here, the Atlantic provides indescribably blue water to swim in and coral reefs are in excellent condition. The fish life is teeming. Valentines Marina and Resort offer Scuba instruction, a dive shop, and a daily diving trip for both the novice and expert.

Those wanting nights ashore will find wonderful lodging at several island hotels, including the long-established classics like the Pink Sands Resort, the Coral Sands, The Dunmore, or Runaway Hill Inn. 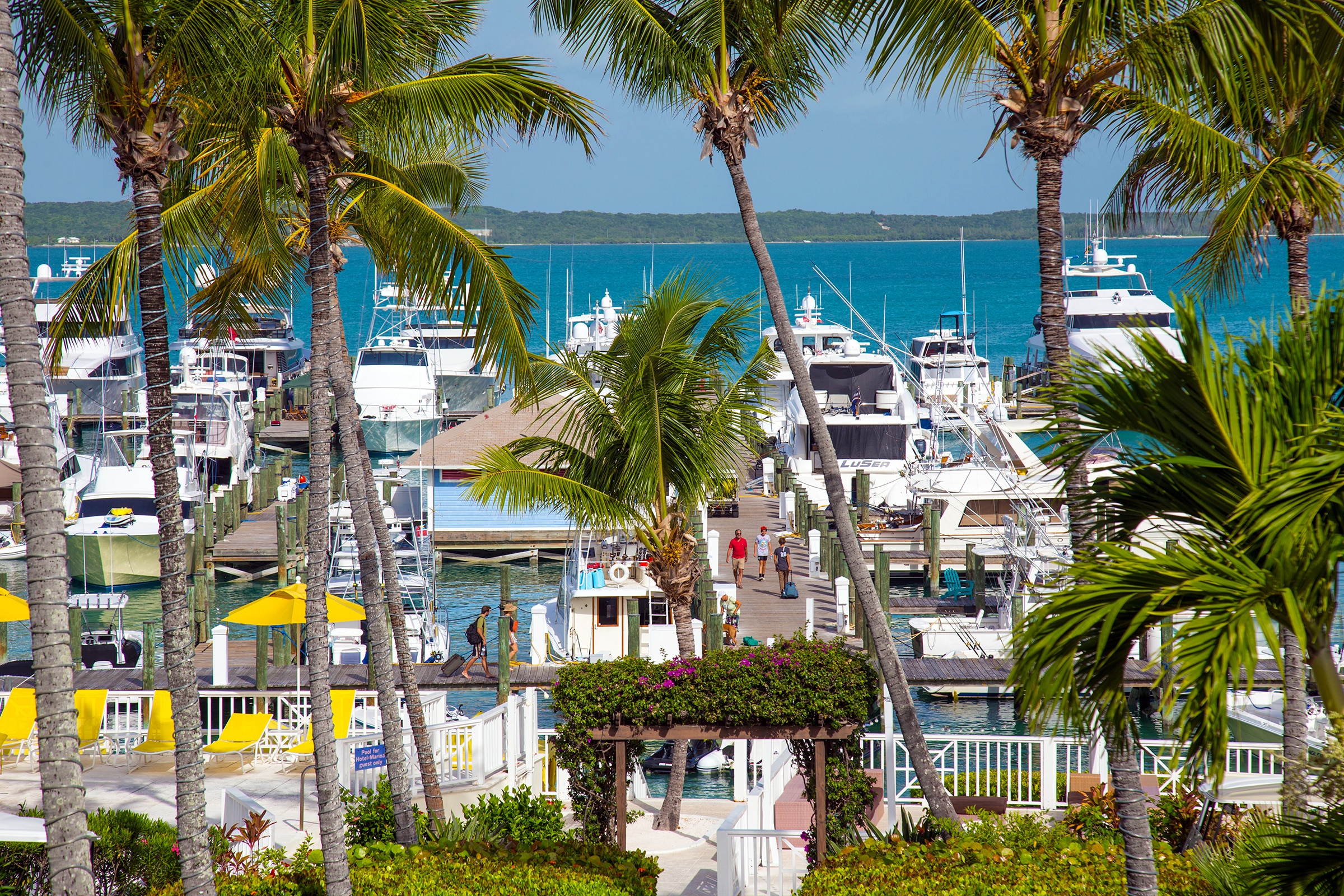 We pulled up to a real treat at the fabulous Romora Bay Resort. A full-service marina with 50 slips, it boasts luxury cottages, fine dining, and all the activities one could ask for, including live music three times a week. Graciously hosted by Partner/General Manager Joe Dargavage and his wonderful staff, the Harbour Island experience was one we’ll never forget and, without question, begs repetition.