Passage on the Potomac

Crossing the Potomac River from the Chesapeake Bay into Washington, D.C., is a rewarding voyage.

It almost seems like the start of a bad joke: What do presidents and prehistoric sharks have in common? The answer is the Potomac River. With striking scenery, presidential landmarks, and yes, the opportunity to find prehistoric shark teeth, this passage from the Chesapeake Bay into Washington, D.C., is a worthwhile detour for those cruising the East Coast.

Bordered by Maryland and Virginia, the Potomac can enter the Chesapeake with a bit of
attitude. As you turn into the river, be aware of wind and currents. If entering the river from the north, the Point Lookout Light will be to starboard. Built in 1830, this original structure warned the shipping community of nearby shoaling. Still an issue, give Point Lookout a wide berth as its shoal extends southeast. 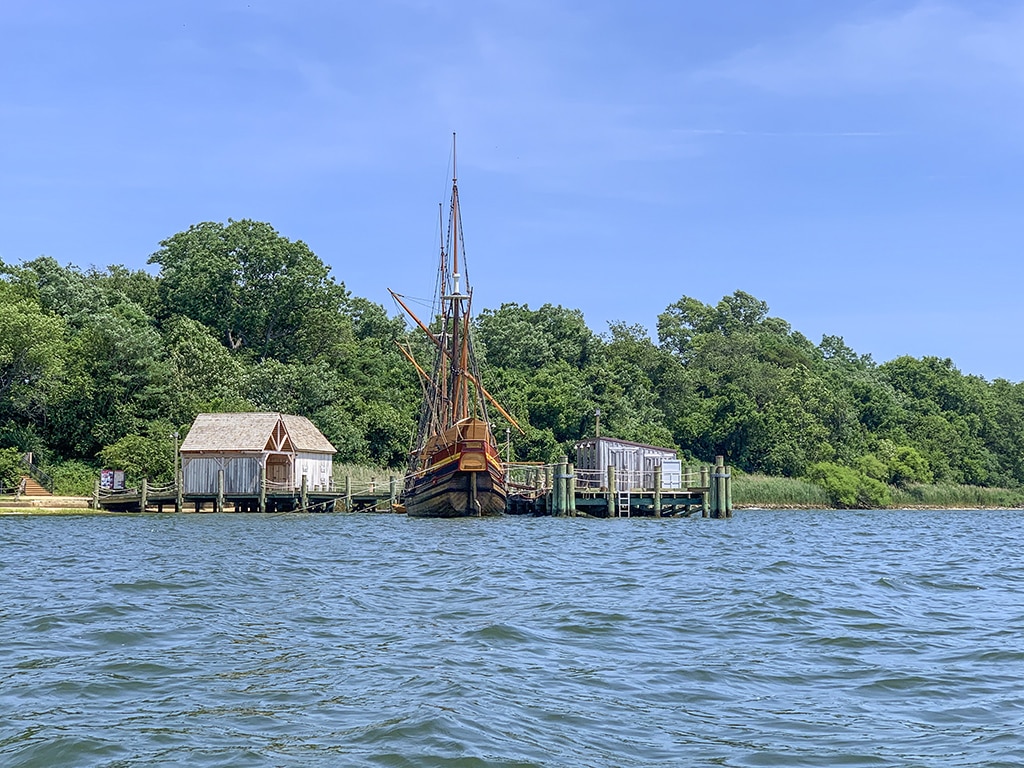 Just around eight nautical miles in is the entrance to the St. Mary’s River. Follow it another six nautical miles to the Horseshoe Bend anchorage which offers good holding and proximity to the St. Mary’s College dinghy dock, making it ideal for going ashore. St. Mary’s is a college town with walking trails and historical buildings. Stop at Farthing’s Ordinary and visit the living history museum. Horseshoe Bend consistently offers anchored vessels lovely sunsets as you go to bed dreaming of the next day’s adventures.

Moving northwest again, you will pass one of the Potomac’s hidden treasures, Hollis Island. Located in Nomini Bay, tucked just out of the river, it is a small island that shows itself at low tide. Best suited for a day visit, with a southerly breeze it can be a relaxing overnight stop as well. Hollis Island is a private island, and a permit may be required for your visit.

Two things to consider when wondering why the Potomac offers a wealth of fossilized shark teeth. First, sharks have multiple rows of numerous teeth which are embedded not in bone, but in their gums. This results in frequent loss and replacement of rows of teeth throughout their lifespan—teeth which eventually fall to the ocean floor. Second, there was a time when the entire Potomac region was underwater. When the waters receded, what was once an ocean floor became the fossil-laden cliffs bordering the river. The river’s ebb and flow erode the cliffs, releasing the fossils which eventually wash ashore.

There are other shark tooth-hunting grounds on the Potomac but being downstream from a particularly prolific cliff makes Hollis a shark tooth-finding mecca.

Continuing your course upriver, don’t miss Westmoreland County’s Colonial Beach, the birthplace of George Washington. In 1656, Washington’s great-grandfather, John Washington, came to these shores when an English merchant ship he was on grounded. While waiting for ship repairs, he fell in love and married Anne Pope, establishing the legacy of the Washington name in the American colonies.

After catching a slip at the Colonial Beach Yacht Center or The Boathouse Marina, the first order of business is getting a golf cart. Colonial Beach is a golf cart community and local companies offering hourly or daily rentals will drop them off at the marina. Visitors will find beach cottages, a beachfront boardwalk, and plenty of places for good food and live music.

After a day or two near the birthplace of our nation’s first president, it is only fitting to make your way further to his well-known homestead, Mount Vernon. There are a couple of anchorages from which to stage a day cruise to Mount Vernon. Fairview Beach anchorage is a bit exposed, but if the winds allow, it is a nice layover. On shore, Tim’s II at Fairview restaurant offers indoor and outdoor seating with scenic view of the Potomac.

If winds have a south component, you may find a more hospitable haven in Wades Bay. This tree-lined cove is another shoreline known for abundant shark teeth fossils.

Slightly north of Wades, and worth a dinghy trip, is Mallows Bay. The remains of hundreds of vessels lie in its shallow waters. During WWI, Woodrow Wilson engaged shipbuilders to produce wooden steamships for use as naval transport vessels. These ships never saw wartime action as production delays and the emergence of steel-hulled ships quickly made them obsolete. 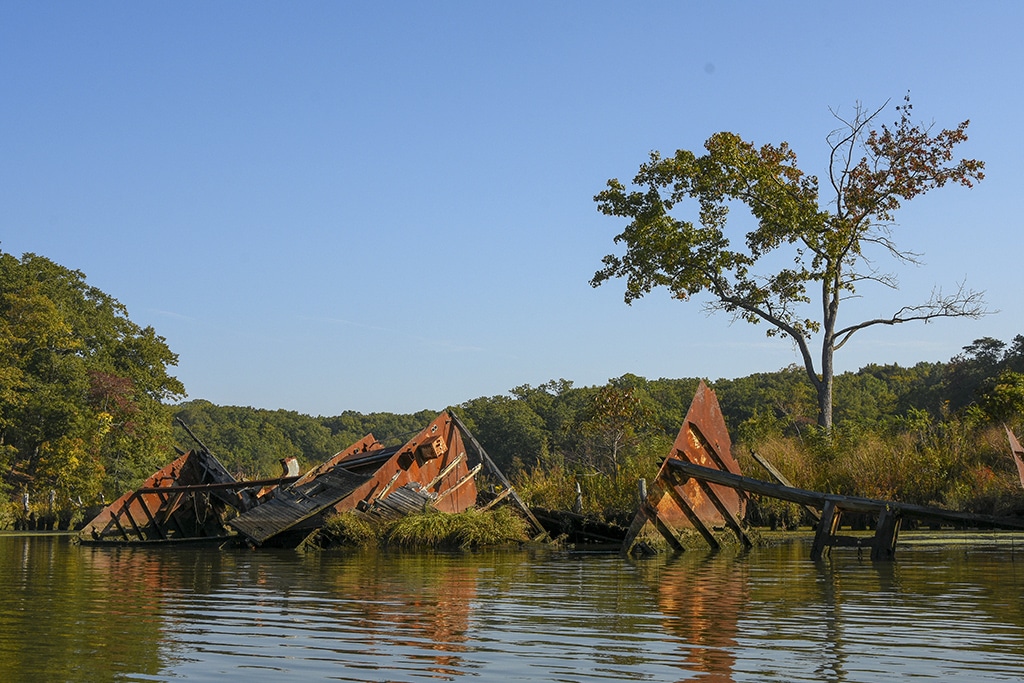 Eventually, most of the fleet was brought to Mallows to be scuttled. Today, more than a dozen of these ships can be seen half-sunk, decomposing in the shallow water and forming the base of a healthy ecosystem. Shrubbery, trees, birds, and fish are thriving in these hull-shaped habitats.

After a restful night, follow the river less than 20 nautical miles until you see the green sloping lawn and red-roofed building of Mount Vernon. There are day anchorages nearby and a visitor dock for smaller boats or dinghies. Purchase tickets for a tour of the estate, or simply stroll the lovely property on your own. 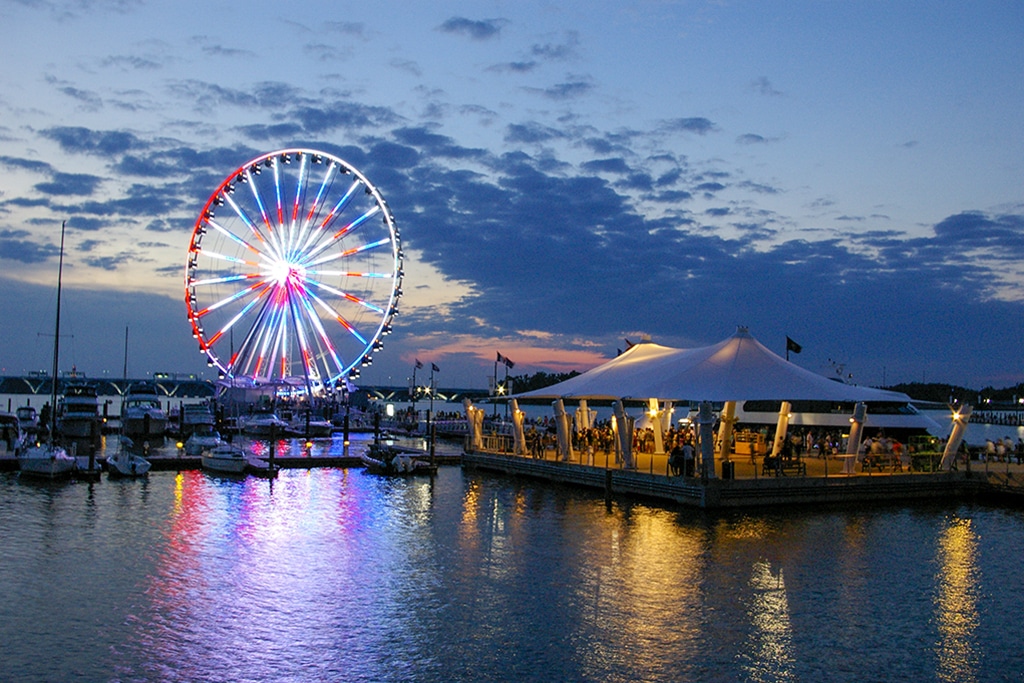 As you continue up the Potomac, you will find two very different landing sites on opposite sides of the river. If you are drawn to the modern and trendy, then cast your bow to starboard and the National Harbor. You will be greeted by the sight of The Capital Wheel, a 180-foot-tall Ferris wheel overlooking the riverfront. The National Harbor is a secure facility offering easy access to shops and restaurants. It is home to the MGM National Harbor, a hotel with one of the largest casinos outside of Las Vegas. The Gaylord National Resort and Convention Center, with its stunning glass-fronted atrium overlooking the river, is a short walk from the marina.

If its historic vibes you seek, continue under the Woodrow Wilson Bridge and veer to port to visit Old Town Alexandria. Be mindful of all no wake zones as you pass beyond the bridge. Proximity to town makes the Alexandria City Marina worth the three-foot tide variance on a fixed dock.

The cobblestone streets are lined with small eateries, shops, and historical markers. Located on the city’s waterfront is the must-visit Torpedo Factory Art Center. Once a naval munitions plant in WWII, today it houses three floors filled with diverse works of art, active studios, and archaeology exhibits that are free and open to the public.

Upon leaving Alexandria, you will cruise past the Reagan National Airport. The airstrip is so close to the river, it feels as if the planes are about to land in the channel. The waterway leading to D.C. will split twice. While it may seem confusing, it is well-marked, and navigational aids are clear.

Follow the first split to starboard into the Washington/Anacostia Channel. When approaching the second split, head to port. You will know you are in the correct channel when you see the stately War College building looming to starboard and the grassy knoll of Hains Point to port. 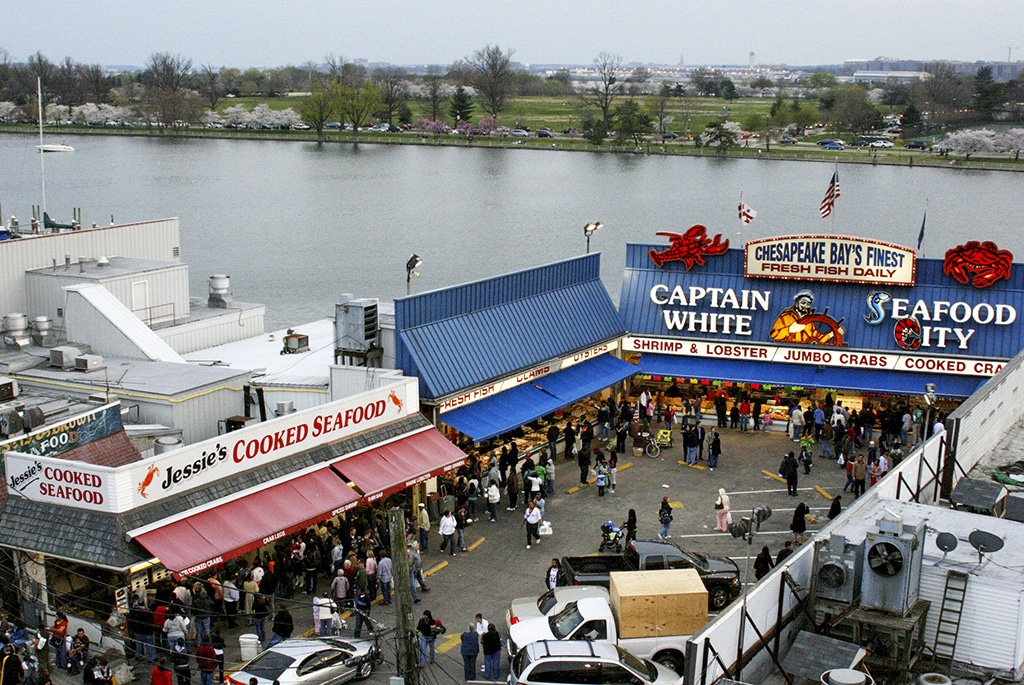 Just south of the National Mall, the Capitol Yacht Club and The Wharf enable easy access to all Washington, D.C., has to offer. Restaurants, shops, and waterfront parks are just steps from these marinas as well as transportation options.

A short eight-minute walk gets you to the nearest metro station or take the free shuttle and explore the nation’s Capitol. Don a good pair of walking shoes and spend a day, or two, or three, and visit the Smithsonian, art galleries, and monuments. These buildings and structures not only hold the evidence of days gone by but also the foundation upon which we continue to develop science, technology, industry, and society.

Before leaving the waterfront, be sure to stop by the iconic Municipal Fish Market. Established in 1805, it is the oldest continuously operating open-air fish market in the United States and the best place to stock up on fresh seafood before heading back down the river.

In all, the trip from the Chesapeake Bay to Washington, D.C., on the Potomac River is less than 100 nautical miles. While you certainly could make your way up the river in rapid fashion, taking the time to explore all the Potomac has to offer will not go unrewarded.