You may hear that The Bahamas is the shark capital of the world, and if you think it’s a marketing gimmick, then think again.

Sharks in The Bahamas are well protected. It’s the only country in the world to declare the entire marine habitat a shark sanctuary.

There are 40 species of sharks within the 243,000 square miles of the country’s territorial waters. The country was a global leader in 1993 when it banned the harmful practice of long-line fishing, and it continues to be recognized internationally for its trendsetting conservation efforts. The result is a healthy shark population unrivaled anywhere else in the world. For boaters and divers, it has all the ingredients for unique and spectacular underwater encounters.

There are five big sharks in The Bahamas that stand out for how they congregate in such large numbers in Bahamian waters. Similar to the African safari scene, The Bahamas has a shark safari circuit with its own “Big Five” list. On the African continent, the Big Five were originally classified based on how dangerous and difficult they were to hunt on foot: the lion, leopard, rhinoceros, elephant, and Cape buffalo. Today, they represent safari royalty, for they are the most sought-after wild animals to spot on the African safari circuit. Personal preference is the ultimate determinant of safari satisfaction, but it is still a treat to spot the Big Five.

Sharks in The Bahamas 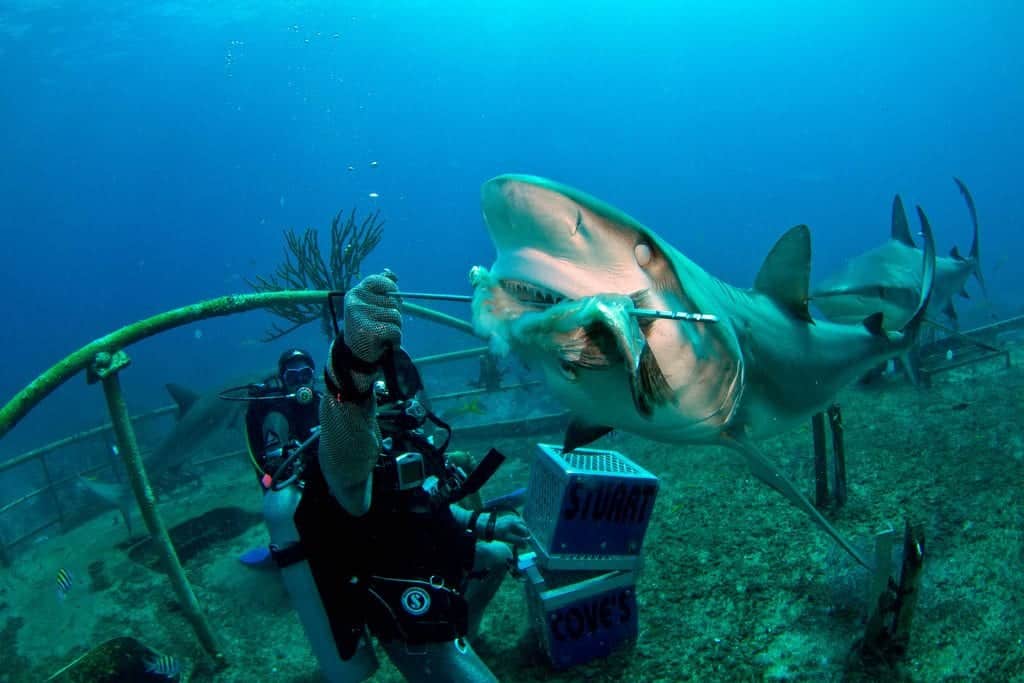 In The Bahamas, it’s no different. The Big Five sharks in The Bahamas consist of five apex predators that congregate in unique habitats across the archipelago. For encounters with these majestic underwater creatures, you’ll need to visit specific islands: Bimini for hammerheads, Cat Island for oceanic whitetips, West End Grand Bahama for tiger sharks, Nassau for Caribbean reef sharks, and Nassau or Andros for silky sharks. Anyone who has the chance to interact with the Big Five on a shark safari in The Bahamas is in for a stunning and exhilarating underwater experience. If you conquer these experiences, you’ll most likely encounter the honorary members—lemon and bull sharks.

Caribbean reef sharks are the entry level species when it comes to the Big Five. You can find them on shallow coral reefs, around underwater wrecks and during shark feedings with shark wranglers. Nassau shark dives primarily focus on these predators, the staple of the dive circuit. Runway Wall, also known as the “Shark Arena,” is one of the most popular locations for divers to meet these shy sharks for the first time.

Cat Island has the largest aggregation of oceanic whitetip sharks in the world. These vulnerable sharks have seen their global populations decimated over the years as a result of long-line fishing. In the protected waters of The Bahamas, they thrive. The Cat Island dive is a three-dimensional experience. Unlike stationary shark dives that take place on the sand bottom, divers drift in some of the deepest waters in the ocean on this shark encounter. The sharks are baited, but not fed. The bait crate is suspended in about 30 feet of water. The actual ocean floor might be over 3,000 feet below. Sharks are attracted to the scent of the bait.

The endangered great hammerhead shark is the largest of all hammerhead species. From December to April, the warm waters of Bimini draw these big-headed, oddly shaped predators all the way from the cold waters of California to their winter home in the Bimini islands. They congregate around half a mile off the coast on the leeward side. By human standards, the water is cold and wetsuits are necessary.  Some divers spend up to 90 minutes on the bottom since the shallow dive takes place between 15-25 feet. Feedings can attract the notorious bull shark, which is a bonus to the Big Five.

West End, Grand Bahama, is the most northern point in the entire Bahama chain of islands. 27 miles off offshore, in 30 feet of water, there is a sandy bottom floor known as Tiger Beach. This is one of the most spectacular shark dives in The Bahamas, and the main attraction is enormous tigers, some 16 feet in length. Unlike other dive sites where you might only see a handful of sharks, Tiger Beach is packed with them. As underwater shark photographer Andy Murch says, “They’re big; they are not shy.” Lemon sharks, which are a bonus to the Big Five, make regular showings at Tiger Beach. This is the best year-round spot to see them. The close encounter with these predators makes for amazing underwater photography.

This deepwater species has also suffered major population declines internationally due to long-line fishing. It’s possible to spot silky sharks around Andros Island year-round, but the best place to see them is the Lost Blue Hole in Nassau. In June, hundreds of these sharks gather not more than 9-10 miles offshore for a breeding ritual that looks like a choreographed dance in an underwater rotunda. Dive inside the blue hole, and watch the show around 170 feet down.