Just 200 yards off the southeastern shoreline of Cat Island, the shallow coast descends into the depths of the Atlantic Ocean. Beneath the surface, the boundary between your field of view and the infiniteness of the ocean varies. But from every direction, the water is like a glassy wall—everything is visible, including the particles in the water and the light rays dancing and decorating the water column. Beyond the border is the haziness and eeriness of the unknown, a dark blue abyss from which deadly predators emerge. This is the type of environment most people would gladly avoid, but in Cat Island, it is the exact location many divers seek out between March and June. It’s the prime habitat for one of the world’s most threatened apex predators: oceanic whitetip sharks.

Cat Island is the last safe haven for globally threatened oceanics. These inquisitive pelagic sharks live in the blue abyss and emerge from the ocean’s depths to scavenge their prey on the surface by following schools of baitfish (tuna, wahoo, mahi-mahi) that migrate through The Bahamas.

“If there is one thing I love about Cat Island, it is the predictability of the sharks,” reported underwater photographer Andy Murch in a 2018 shark diving report. “The oceanic whitetips that inhabit this deepwater region of The Bahamas have become a menace for sport fishermen that are trying to land their fish. As soon as the sharks hear
a fishing boat engine, they race in and steal the struggling tuna before it can be hauled out of the water. Consequently, once we reach our favorite shark spot, all we have to do is chum and rev the engines of the dive boat as if we have a fish on. The oceanic whitetip sharks show up like clockwork.”

Capt. Renald Butler, the owner of Bowleg Fishing Charters, knows the trick very well. For several years, he was the local captain of the dive boat for Epic Diving, an international dive company running seasonal expeditions out of Cat Island. He also dove with the sharks.

“At first, when I started, I was skittish of them,” says Butler, who has been diving in Cat Island since childhood. Oceanics have a reputation of being vicious sharks dating back to
the 1940s when a U.S. Navy ship was sunk by a Japanese submarine. Oceanics are believed to have ravaged hundreds of sailors left marooned in the sea, earning it a  reputation as one of the “deadliest mass shark attacks in history.” 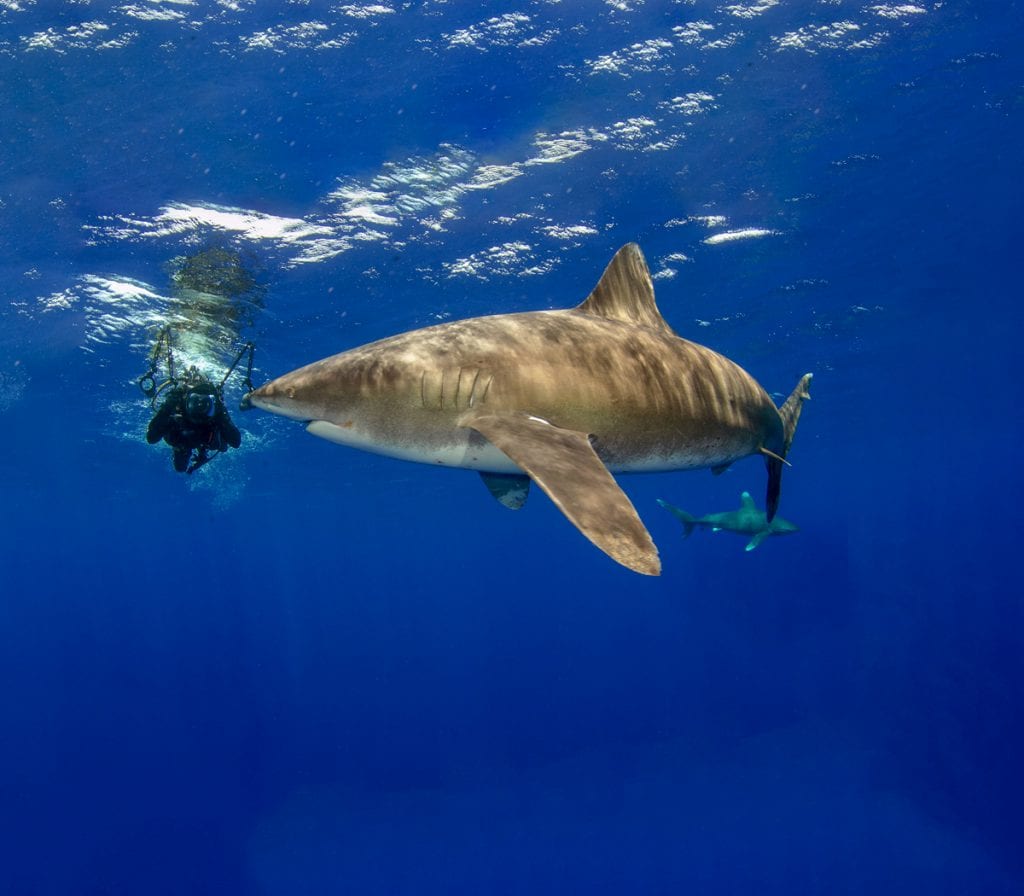 The International Shark Attack File (ISAF) maintained by the Florida Museum of Natural History ranks the oceanic sixth in their global database of shark attacks for the number of unprovoked fatalities. There are only three verified incidents in ISAF’s history between 1580 to the present. It ranks 16th for non-fatal unprovoked attacks with seven. Butler says he saw another side to oceanics while diving with them at Cat Island. “They are not the vicious sharks’ people make them out to be. I dove with them and have seen people rub them down like you are petting a dog.”

To bring the oceanics to the boat, Butler also makes the engines sound like they got a catch. “The sharks love that,” he says. “Once they hear the sound of that engine, they are
coming up to the top to see what’s going on. We wait until we see the sharks and then we jump into the water. This water could be eighty to ninety feet or thousands of feet deep. With the boat and sound of the engine, I’ve brought them into fifteen feet of water.”

Oceanics are one of the most threatened species. Their global populations shrank from long-line fishing, outlawed in The Bahamas in 1993. Today, The Bahamas is a pillar of shark conservation. The entire country is a shark sanctuary by law and permanently protects more than 40 shark species in approximately 243,244 square miles (630 square kilometers) of the country’s waters.

“The sharks are really important in the localized area where they are, but they are also affected by threats that can be global,” says Catherine Kilduff, senior attorney at the U.S. Center for Biodiversity. “For example, changes in ocean conditions due to climate change can affect sharks locally. The biggest impact of having sharks locally is that
they can keep local ecosystems healthier. If you are going to maintain healthy dive locations, you want to protect the sharks there.”

Diving with oceanic whitetip sharks is different from most other shark species in The Bahamas because it is an open-ocean drift dive, best tried, according to some experts, with previous shark diving experience and specialized training. “You need extremely good buoyancy skills to dive with oceanics,” says Murch, who is also chief executive officer and expedition leader at Big Fish Expeditions. “You are not able to drop down on the sand and compose yourself. If you drop down in Cat Island, you just keep going. There are potentially aggressive sharks which require a level of composure and experience so you can read the sharks.”

Only a handful of local and international companies lead shark dives off Cat Island,
including the Dive Shop at Greenwood Beach Resort and Neal Watson’s Bimini Scuba Center on North Bimini. Big Fish Expeditions and Epic Diving bring divers to The Bahamas seasonally.

The country’s other most famous shark dives take place year-round in shallow water. Divers spend most of their time on the sandy seabed, passively interacting with the sharks. They kneel in a stationary circle as sharks gracefully cruise by to secure tasty fish heads dished out by professional shark feeders.

On a Cat Island shark dive, you might see land above the water, but not the seabed below. “There is no real bottom,” says Watson. “You are diving in one of the deepest parts of The Bahamas.” Cat Island sits on a continental shelf and has more than 20 miles of wall diving that starts around 40 feet deep at its shallowest spot and drops off to approximately 3,000 feet.

In addition to the uniqueness of the ocean, Cat Island is no ordinary island. It is more remote and underdeveloped than the other popular shark diving islands of Bimini, Grand
Bahama and Nassau.

“The diving is more advanced and the location is more advanced,” says Watson. “There is no Hilton hotel on Cat Island. Cruise ships don’t go there. It’s a little wilder, and the sharks and the fish around Cat Island are more indicative of that Out Island experience.”

Even though diving with oceanics is very different than other shark dives, divers have had sightings of many other species while in search of oceanics, including blue marlins, mahi-mahi, and tuna as well as hammerheads, tiger sharks, blue sharks, silky sharks, reef sharks, dusky sharks, and blacktips.

By Noelle Nicolls, Southern Boating May 2019

Tournament Fishing in The Bahamas