Throughout The Bahamas, there exist less-traveled paths that contain treasures around every bend. Here’s a tale: the path to Crooked Island.

Her name was Delia, a Morgan 38 with a white hull and beige canvas. That’s what I was looking for as I squinted in the afternoon sun, scanning over the crowded anchorage at Marsh Harbour in the Abacos. I was joining up with a crew heading to Crooked Island, but now I was searching for my ride. Oh man, I groused, almost all the boats here have a white hull and look like a Morgan 38. How am I going to find this thing?

My American cell phone was useless; there was nothing to do but let the taxi driver go and hope someone spotted me from the boat. Somehow the gravitas of my presence at Union Jack dock was enough to attract the keen eyes of boat owner Coy McDonald, who dispatched the dinghy forthwith to fetch me.

After introductions and a cold drink, Coy discussed the intended itinerary as his first mate and wife, Christina, whipped up one of the many excellent meals we would enjoy on board. “We’ll run down the Sea of Abaco,” he told us, “then jump offshore and run straight to Crooked Island” (part of the Bight of Acklins). Erik, an itinerant sailor from Manjack Cay, and Niki, a travel blogger, rounded out the crew.

Sundays in The Bahamas are very quiet. The only things usually open are churches and beaches, but lucky for us, Maxwell’s Supermarket was open for business and fully stocked. This would be the last grocery store in our path, so we jammed two shopping carts full of provisions into the overloaded dinghy and headed back to Delia. With a full larder, we weighed anchor and got underway at 1300. Coy gave a safety briefing while I punched waypoints into the GPS.

Heading south, I learned of some of the issues Delia had faced so far on this voyage. There were fuel and alternator problems, and the single-sideband and autopilot were not functioning, but this was nothing we couldn’t overcome. While at Little Harbour, Coy spent several hours on the phone talking with a marine tech in Florida who patiently guided us through a checklist of tests and, somehow, the alternator returned to life. The voyage to Crooked Island was saved.

After an overnight passage along the spine of Eleuthera, we cleared Bonefish Point on Cat Island and decided to drop the hook in New Bight Settlement to refill the jerry jugs with diesel. It’s a treat every time I sail here. This time, we discovered that residents had built a free shower house for visiting yachts. (If you go, it’s a turquoise-colored building on the north side of the anchorage.)

In the cockpit that evening, Christina served up another delightful repast featuring the tuna we caught that morning and Mount Gay cocktails. Ah, the sublimity of the moment; we toasted the flower moon as it glowed above the monastery on Mount Alvernia—this is why we sail.

The next morning, Erik and I hitched a ride and returned with 10 gallons of diesel. We got underway and before long, we rounded Hawk’s Nest Point and set course for Crooked Island. The bottom dropped out of the depth sounder and the trades filled in from the east.

I’m sure you’ve heard about the green flash. I always thought it a myth, a chimera created by whimsical sailors who want to make the ocean sound more appealing. But I can tell you now that it’s real. I saw it that night, and I have four witnesses.

Offshore passages are very exciting but tough on the body. It’s difficult to get proper sleep. I scheduled myself for the middle watch (0000-0400) and should have taken a nap that evening beforehand, but there was too much going on and before I knew it, I was at the wheel with everyone else snoring below. Puffy clouds cloaked the moon. The wind freshened, the boat heeled.

I was simultaneously exhausted and exhilarated as Delia galloped along past the darkened shapes of Conception Island and Rum Cay. At 0930, right on cue, the lighthouse on Bird Rock popped over the bright horizon. By noon we were turning into the wind and the water went from purple to blue, to turquoise, then white. Down splashed the anchor, and the crew made ready for shore leave. Onward to Crooked Island.

From the moment the dinghy landed in Landrail Point Settlement we could see that all was not right. Hurricane Joaquin had really torn the place up in 2015; ruined buildings were everywhere. There were no people. It had the eerie feel of a war zone. But in a moment, everything changed as a truck sped down the dusty road. The smiling driver called to our charter host, “Coy! We heard you were coming!” The two embraced. 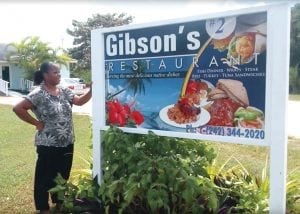 Another truck arrived, and the occupants jumped out to welcome us to their home. We climbed in and were spirited off to the cultural center of the island, Gibson’s Restaurant #2, run by matriarch Willie Gibson who had anticipated our arrival and planned a nice dinner for us. Why #2, you ask? Restaurant #1 was destroyed in Hurricane Joaquin. We returned at 1930 and feasted on the best meal I have ever experienced in The Bahamas: lobster tail, conch salad, taters, and cheesecake. I waited for the check which never came. Coy whispered to me, “This is how these people are. We’re not customers, we’re family.”

After breakfast, Woody, a fishing friend of Coy’s, came by on his Boston Whaler with his crew, Andy and Henry. They offered to let me ride along for the morning trip and I jumped at the opportunity. Out we went, back into the purple water near Bird Rock Lighthouse, an abandoned brick edifice constructed by the British in 1876. They pulled three traps that contain about 50 pounds of fish. We doubled back to the reefs, and I surprised them all when I jumped right in, grabbed the boarding ladder and dragged along for the ride.

Taking fish in The Bahamas must be done sans scuba gear, so Woody and Henry swam in lazy circles till they spotted a conch or spiny lobster, and then the magic began. They took a deep breath, slowly equalized their eardrums and gracefully kicked their way to the bottom, maybe 40 feet down, to retrieve something edible. And so it went all morning, up and down, until the Whaler was so full of shellfish that she listed. I could only act as a spotter, watching in admiration as these masters of the reef did their work.

At the damaged airport the next morning, Willie and many of the island’s residents helped push the plane out onto the runway and bid me a good trip home. They have a tough life here, yet they are welcoming, generous and kind. A perfect example of the amazing people you meet when you sail off the beaten path.

By Robert Beringer, Southern Boating May 2018

When You Need a Tow in the Bahamas

A Day on the Water – Bertram 50 Express

A Day on the Water All aboard the The Bertram…

Mercury Marine Debuts V12 600hp Outboard At an event at…

All Aboard the Luxury Express Is the Tiara 43 LE…