Between the Southern Tip of Eleuthera and Little San Salvador, there is a figurative bridge connecting the two islands: a seven-mile-long overpass of water running east to west, with depths of 50 feet, sometimes less. This relatively shallow body of water is significant because it straddles an otherwise extremely deep ocean channel. To the north and south of the bridge, the sea is 10,000 feet deep.

The upwelling from this deep channel pushes baitfish into the shallows, attracting lots of big fish and boaters. Anglers don’t just pass through this cut; they deep drop or troll for blue marlin. “It is an amazing fishing area, one of the best I’ve seen in my life,” says Chris Morris, general manager of Cape Eleuthera Resort and Marina.

But these same conditions also make for ferocious seas in bad weather, and the Cape Eleuthera Marina provides a safe harbor. “That is a risky area to let bad weather catch
you, no ifs, ands or buts,” says Capt. Shalako Moxey, a Bahamian boating veteran of 35 years. “You have on the northern shore those big seas rolling in, and coming in around that point, you have those tidal changes that create a big rip current. It is not comfortable at all.”

There are a few spots that even the most experienced Bahamian boaters dread when it comes to being stranded out at sea: the Tongue of the Ocean (a deep oceanic trench separating Andros and New Providence) and the Gulf Stream. “If you miss and break down in the Gulf Stream and a bad tide is flowing downwards, you’ll be in Honduras quick, and if you get caught drifting in the Tongue of the Ocean in bad weather, you might end up somewhere in Cuba,” explains Kenny Minnis, a local boater with personal
experience being adrift in international waters between The Bahamas and Cuba.

Jaronn Roberts, a Harbour Island boater and charter operator says his worst experience was fishing on the wall between the Great Bahama Bank and the Gulf Stream. They lost track of the weather forecast while crawfishing in their dinghies, and wicked weather caught them on the edge of the Bank. “It was a critical situation, and we were afraid. A few of the dinghies sank,” says Roberts. “We tried to come home and started to slowly ride the waves, but the waves were breaking over the boat. It was terrible. That’s when we decided to hunker down.” They ducked behind East Isaac Cay, a sliver of rock that gave them some protection to weather out the storm to the next day.

Captain Brian Turnquest, private charter operator and owner of Party Cat Cruises, recalls being caught wrangling 12-foot seas in the Gulf Stream. “The banks were only three to four feet. When we got in the Gulf, we had at least 12-foot seas all the way from Great Isaac Lighthouse to Palm Beach,” he says. “It was so bad [that] we took the six-man life raft out of the hole and put it between us so it was easily accessible.”

The Bahamas might be a traveler’s paradise, but the sea is still the sea, and no matter how pretty it looks over the aquamarine horizon, bad weather in The Bahamas is no
more forgiving than bad weather anywhere else.

And don’t let those friends and passengers with the sad eyes and frustrated scowls make you think otherwise when the sun is shining and the sea is calm. “A lot of people look
at first glance and go out, but they don’t get a forecast to see if it is going to look nice all day. The weather might be good in the morning, but it might be set to kick up in the
afternoon. That is how people get caught in a bad spot,” says Turnquest. If captains don’t do their due diligence, they’re liable to buck into bad weather unexpectedly and risk ending up in distress. 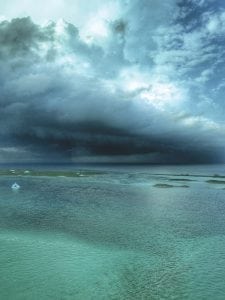 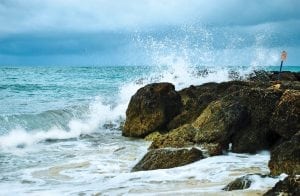