The Windy SR44 SX is a catch no matter how you look at it.

First impressions have a big impact. When I walked up to the Windy SR44 SX, the first thing that caught my eye was the huge booth-style seating arrangement on the aft deck. Its width makes the deck appear expansive as it does for the helm station under the equally large T-top. A quick scan from bow to stern showed me a well-balanced, Feng Shui-like deck, and the twin Mercury V12 600 Verados off the stern murmured their underlying power. Needless to say, my first impression was: “Wow! This is really nice.” I immediately wanted to go out and play. 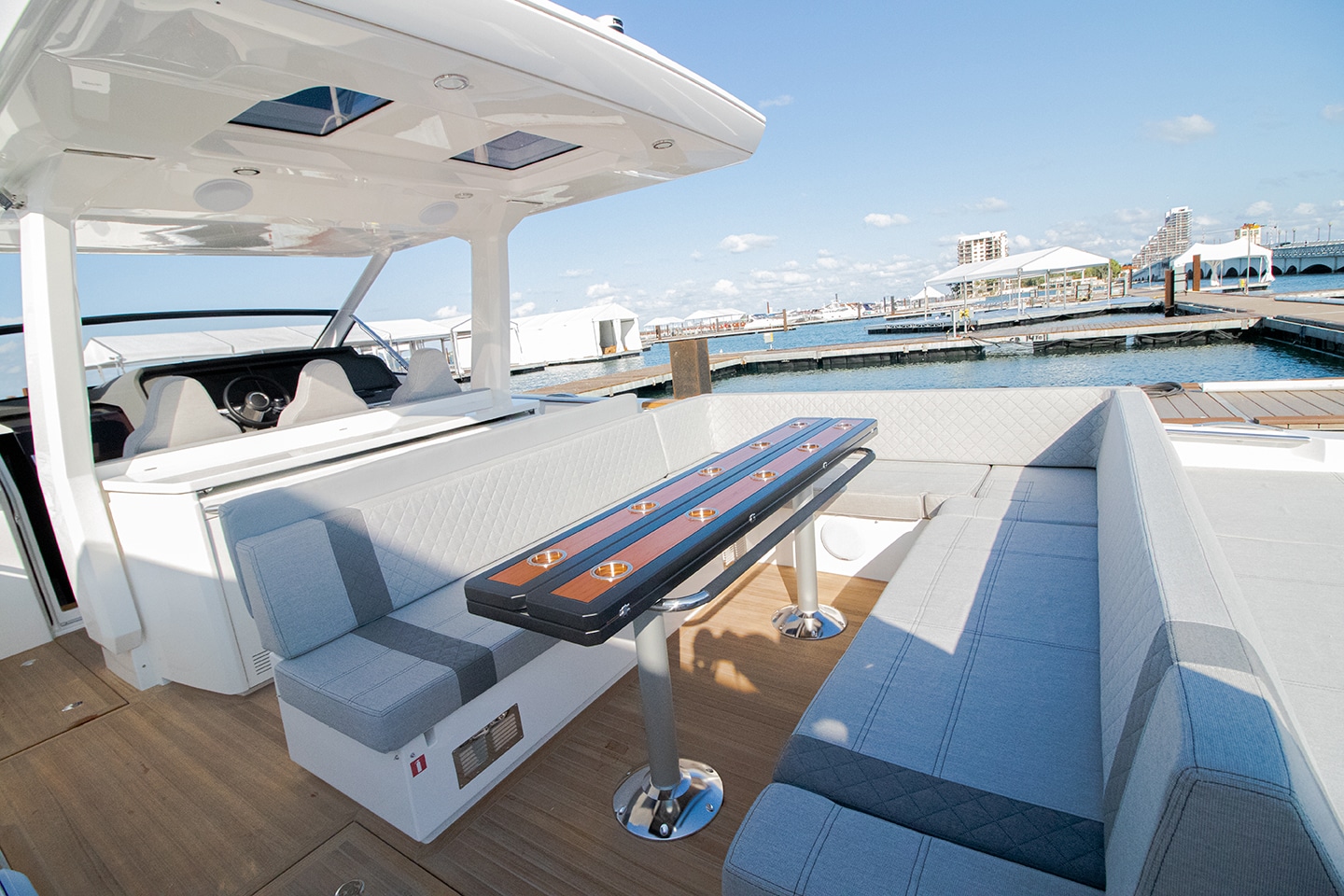 We powered up out of Port Everglades in Fort Lauderdale, Florida, and reached 33 mph without hesitation and into a three- to four-foot chop on the nose. Handrails served their purpose, but the boat didn’t once shiver, rattle, or feel overwhelmed.

“What’s good for us right now is that the wave period is pretty good,” said Capt. Michael Cohen, noting that it was about a four- or five-second period. “If it was a little closer, it would be a lot rougher out here…. I wouldn’t want to push it much further as this is the comfortable speed for these conditions.”

Every boat is affected by wave action, but what surprised me most was when we turned beam to and then downwind, the boat rode like she was on a cushion, as if she melded with the wave angles and moved along with them, even though we were still running at 30-32 mph. We weren’t bouncing. It caught me by surprise and I was impressed—again.

The planing hull has a fast transition to speed as evidenced by the fact that we were up to 33 mph inside the channel before I knew it. The near-plumb bow begins its angle to the waterline about three-quarters of the way down which gives the appearance of a bow-up attitude.

“It helps to have that bow-up attitude when you’re taking those waves so that you don’t worry about stuffing the bow,” said Cohen. The SR44 SX has a monohedron V-hull (constant from the transom forward) with a 20- to 24-degree deadrise, and the sharp keel gives the boat tight handling and incredible linear speed without sacrificing stability. Even into the waves, the boat kept dry. The turning radius was tight, and the waves didn’t hinder or shove the hull aside. She’s a solid boat, and I felt a strength within her that she could safely navigate any condition. 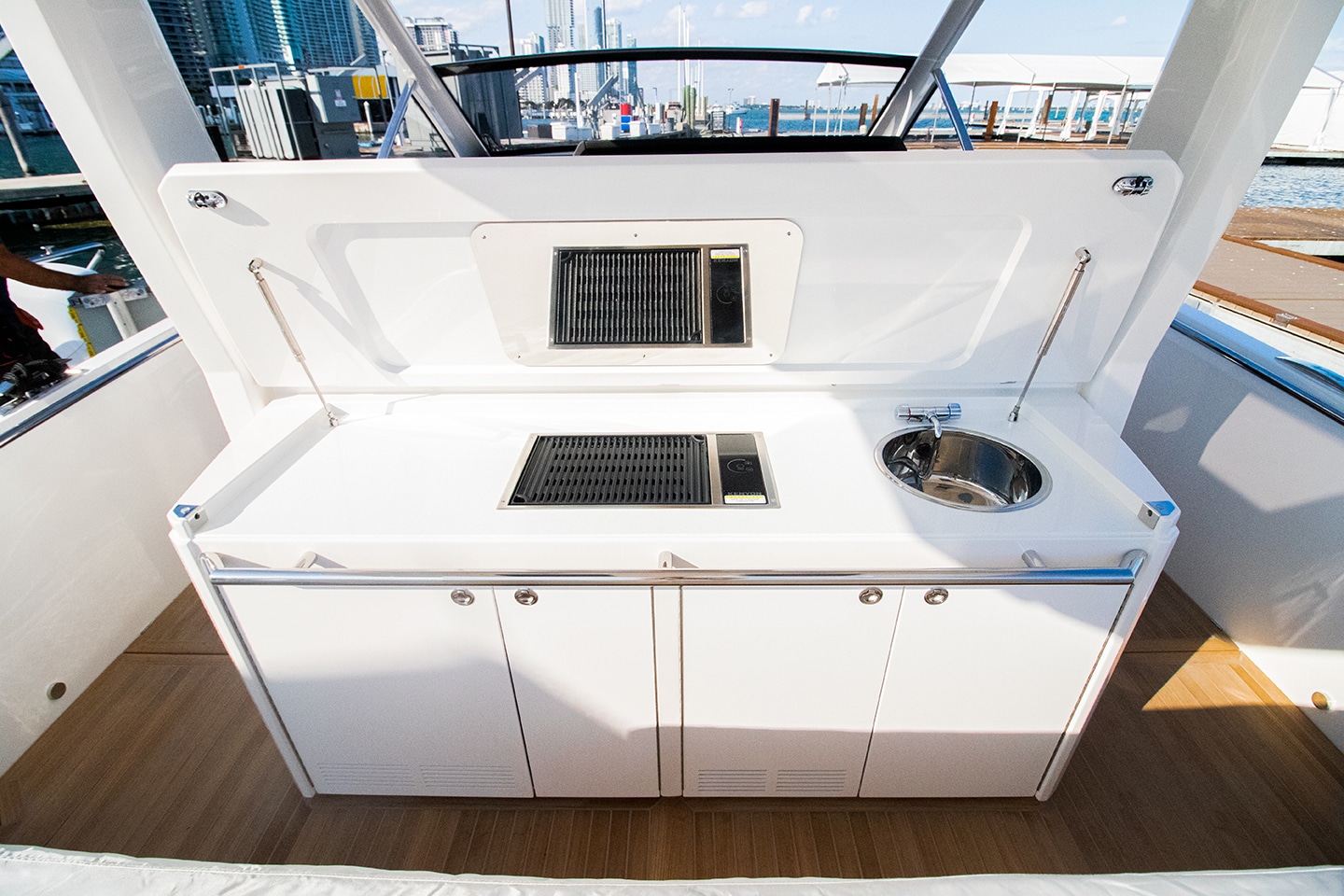 As I mentioned, the Windy SR44 SX has a well-balanced deck, and she really is as big as she looks. There’s a large sunpad at the bow, at least six-and-a-half-feet long, and an optional version includes fold-up backrests to sit up facing forward. Wide walkways on each side provide easy access around the boat, but one reason the cockpit seating is so huge is that it extends all the way to the starboard-side gunwale. It eliminates that walk-thru to the swim platform but provides wider access on the port side.

The cockpit’s booth-style seating arrangement comfortably fits 10, and the aft section spans all the way to the swim platform which makes for a huge sunpad. The adjustable backrest allows for forward- or aft-facing seating.

“Once you actually sit in this massive lounge area, you can easily put ten to twelve people around the table,” said Cohen.

For more room to move in the seating area, the oversized, handcrafted table folds in on itself to reveal 10 cupholders as well as a handrail to steady your movements. The table on this boat had a fixed mount, but a hydraulic one that lowers to seat level to make the sunpad even bigger is an option.

“Social seating is one of the paramount things in Windy’s design,” added Frank Ferraro, director of marketing at Nautical Ventures, the U.S. distributor. “European boats put a lot of emphasis on social areas.” It shows.

An entertainment center sits between the cockpit lounge and the helm with plenty of room to use the grill, grab some refreshments out of fridge or ice from the icemaker, or use the sink. A handrail is mounted below the counter and with a modified leaning post backed to the lounge backrest, it provided plenty of support when we were underway. 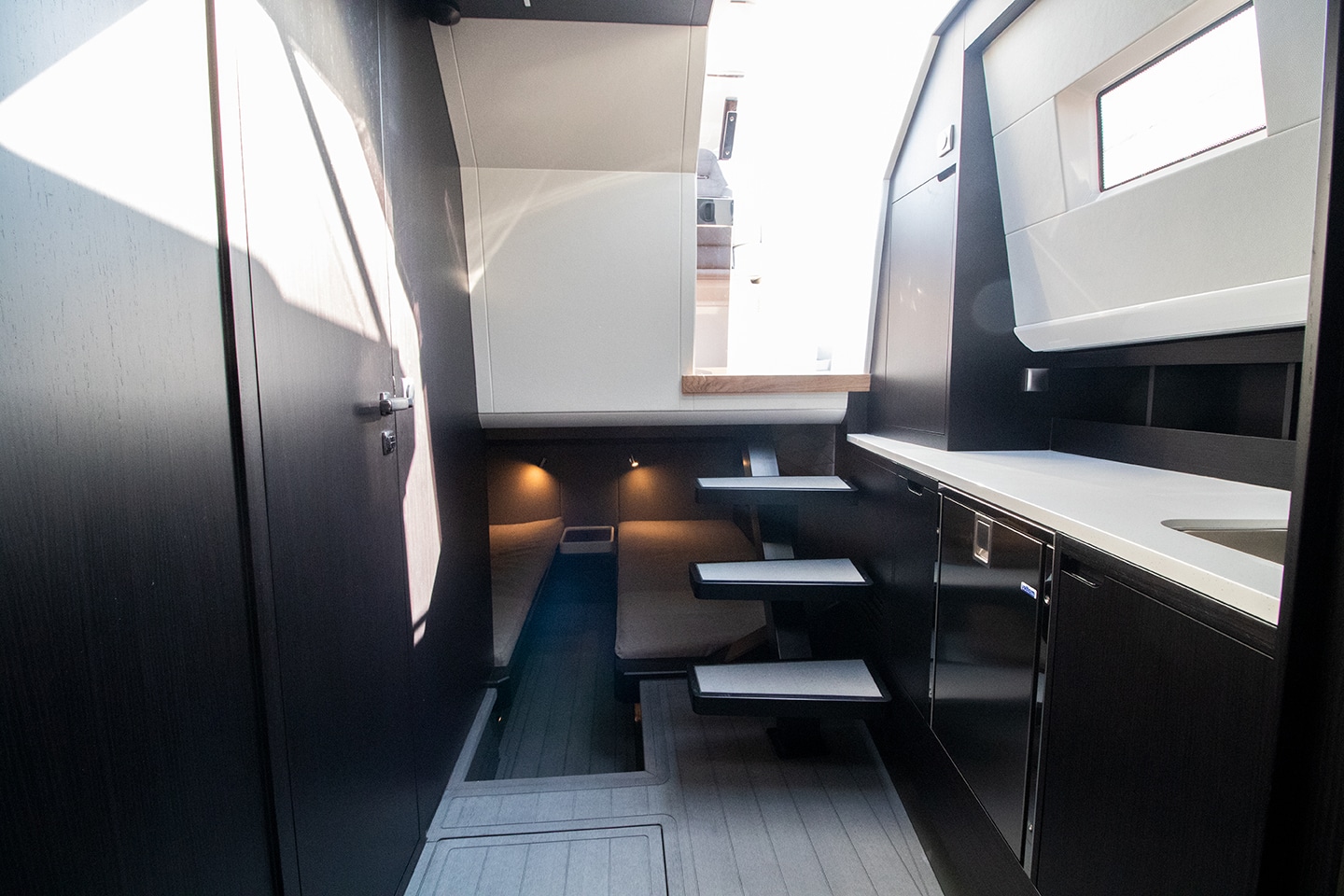 With the amount of space on deck, I didn’t even think about the accommodations below. A couple of steps down lead to the head with separate shower to starboard and a galley to port with more than six feet of headroom. A centerline double berth is in the forward cabin with windows that align with the hull-side windows for a view beyond the deck and to provide additional lighting. A cordless pleated shade acts as a privacy door. Aft in the guest cabin are two single berths. 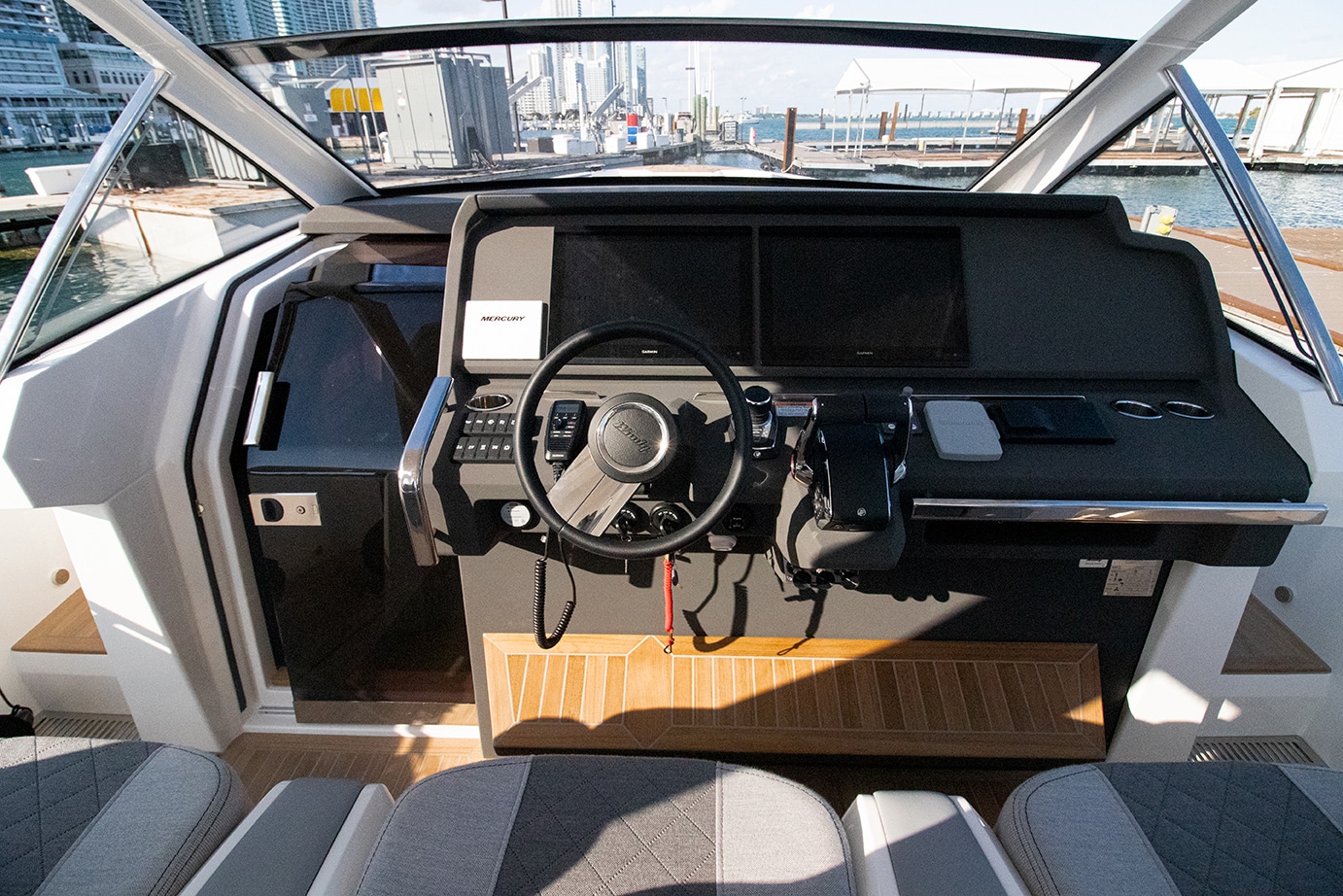 The boat’s width also equates to an expansive helm dash, and that’s with room to port for the companionway to the cabin below. Three 16-inch Garmin MFDs fit across the top, and there is plenty of space on the angle for the centerline steering wheel, the Next Gen Digital Throttle for the Merc 600s, Joystick Piloting with Skyhook, and controls for the Humphree trim tabs, Side-Power bow thruster, and Fusion stereo system.

On this boat, the VesselView engine display monitor is located up with the other screens, so only two Garmin MFDs were installed. Toggle switches for the wipers, horn, lights, anchor, etc., are there as a redundancy as everything to control and monitor the boat and its systems is available through the MFDs, including the sunshade that extends from the T-top over the entire lounge area. 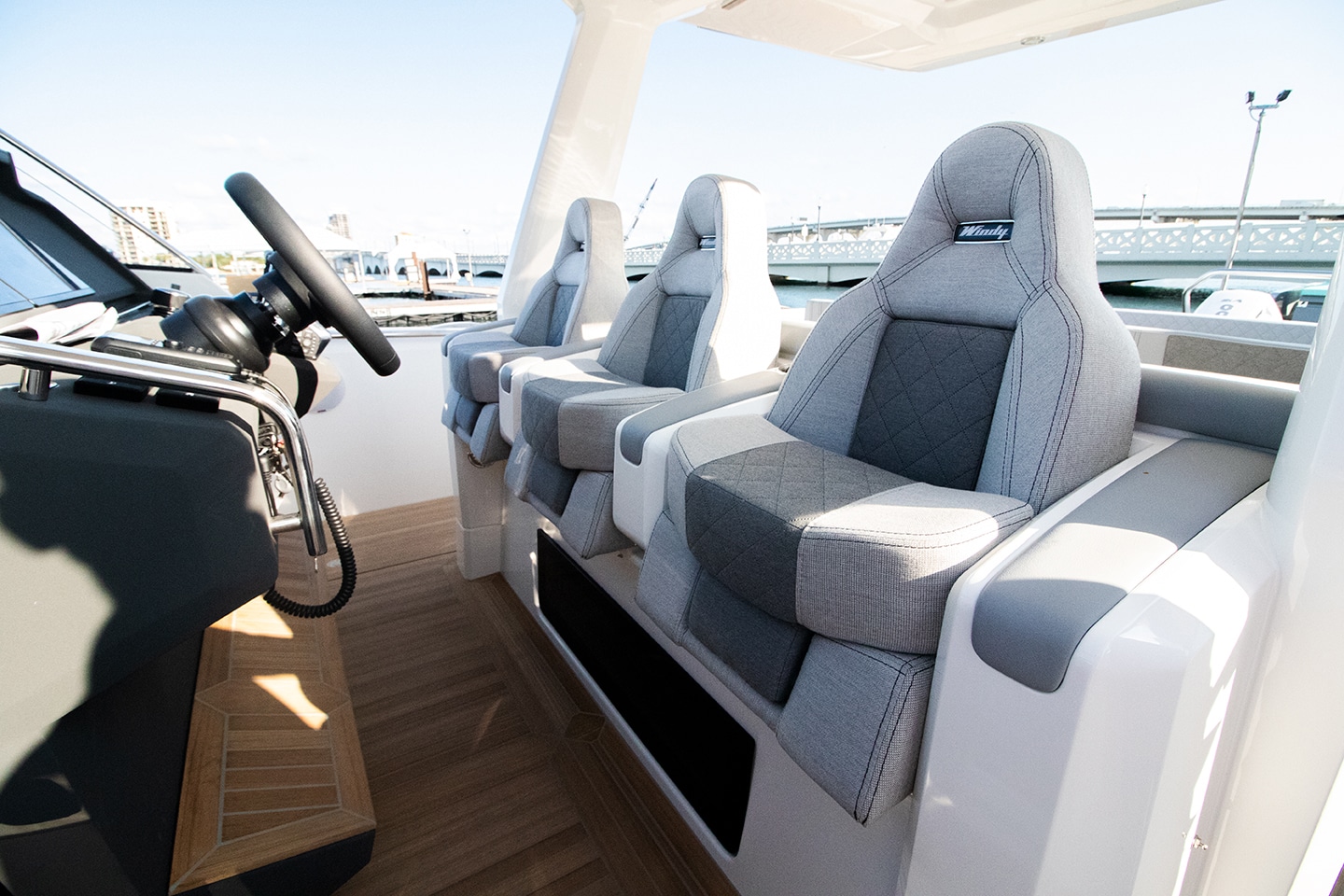 Three large helm seats have bolsters, and a helm-wide footrest makes sitting more comfortable. Owners can customize the upholstery with color choices as well as the woodwork both for accents and flooring.

Two more features up on deck stood out to me. First, I was impressed with the anchor setup on the bow. The anchor is stowed in its own compartment while underway, and its hefty anchor arm electrically deploys out over the bow when needed. A separate compartment aft is the chain locker that has additional sections on each side for fender and line storage.

“Some other manufacturers have an opening in the hull, but we like this setup better because a lot of people are worried about water coming in with all this metal,” said Cohen, as he points out a freshwater outlet in the compartment. “When you’re bringing in the chain, you can easily wash it down as well as the anchor arm. With the anchor deployed, the cover has an opening that folds back to accommodate the arm so you can close the hatch.”

The other feature is hidden under the aft cockpit. With the outboards, Windy designed
a garage that electrically opens to reveal space for inflatables, roll-up swim mats, Seabobs, etc. The surprise comes when you unlatch that compartment floor to access an even deeper compartment for more storage and access to the mechanical equipment, such as the generator and the hot water system. It’s a clever design. 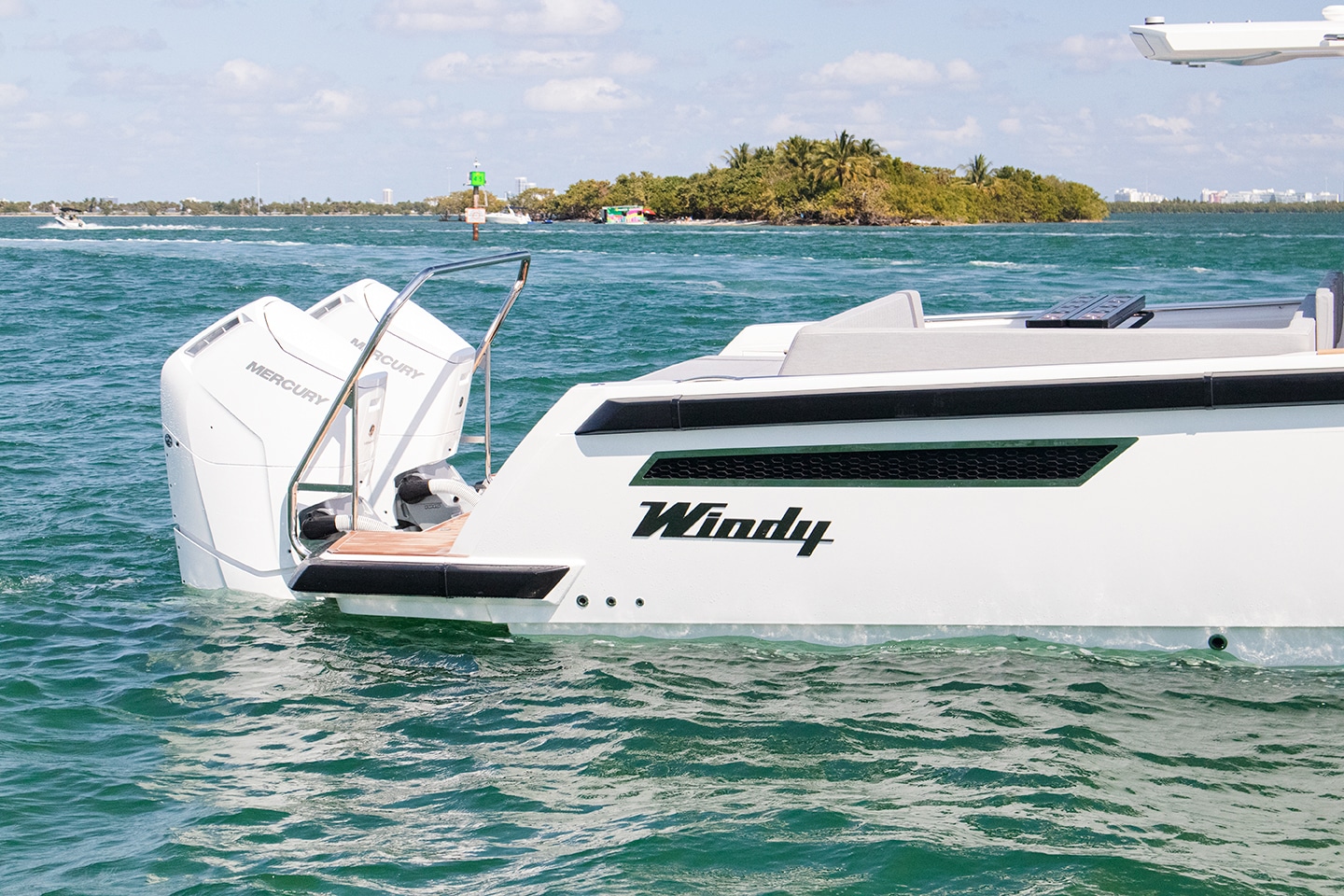 From the swim platform to the bow, the Windy SR44 SX definitely made a lasting impression.