Lighter and stronger. Faster and more fuel efficient. Today, nowhere are these key pillars of contemporary boatbuilding more evident than in the new Grand Banks 60 Skylounge. The GB60SL follows closely on the heels of the first of the new Grand Banks 60 series—an
open flybridge that debuted in 2017—and is based on the same proven hull. (An aft cabin model is on the boards and available as well.)

“The new Grand Banks 60 is taking Grand Banks in a whole new direction in terms of appearance, performance and construction techniques,” says Grand Banks Yachts CEO
Mark Richards, who came to the company with its acquisition of his well-regarded Palm Beach Yachts brand.

For Grand Banks and Palm Beach designs, it’s all about reduced weight plus additional strength, which results in outstanding running and fuel performance efficiencies. The
new Grand Banks 60 was the first collaborative effort between the design teams of both brands, and it resulted in an all-around better performing yacht with a fresh appearance.

It ain’t your daddy’s Grand Banks…

The new GB60SL differs dramatically from the large Grand Banks yachts of the 1990s, like the 58 Classic, a heavily built (100,000 lbs.), 11- to 12-knot boat meant to cruise at 8 knots to achieve a 1,400-nm cruising range. That was then. But when the advances of leading-edge materials and contemporary boatbuilding methods are fused with the traditional luxury and accommodations of a Grand Banks, the resulting yacht excels in both expected and unexpected ways. 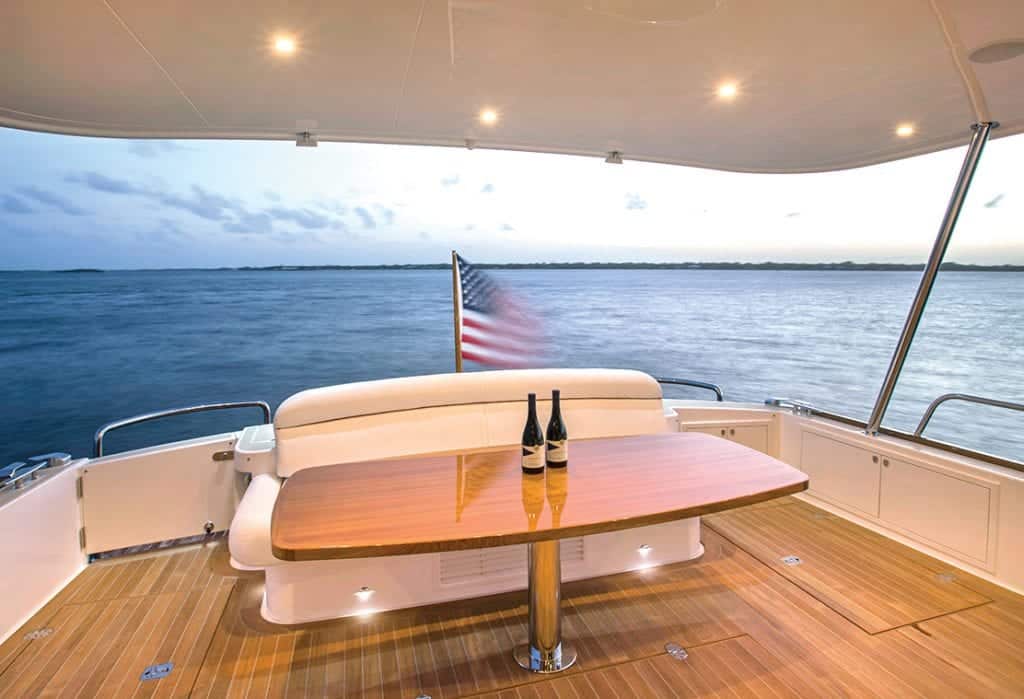 Welcome to now. The deck and superstructure of the GB60SL are fully cored, with PVC foam core and Corecell in areas of specific application, sandwiched between skins of stitched, multiaxial carbon fiber, bonded with infused vinylester and epoxy resins, and supported by infused composite panels to create a robust grid system.

“The new GB60SL structure is fifty percent carbon fiber but from the rub rail up. We don’t use carbon fiber in the hulls, which is due to Mark’s desire to keep some weight lower,”
says Grand Banks Yachts Global Marketing Director George Sass. By keeping the majority of hull structure weight and major machinery and tankage low, the GB60SL designers
have optimized the center of gravity to better control handling underway across a wide band of conditions.

A touch on the Express Positioning button engages the system to automatically hold the
GB60SL in the desired, GPS-located position and heading. This feature is a definite benefit
when waiting for a bridge in tricky winds and currents or when shorthanded and necessary for the helmsman to leave the helm momentarily to tend to lines and fenders.
The GB60SL is a large, comfortable yacht that can be owned and operated by a  knowledgeable cruising couple. The width and interior volume makes extended stays practical for owners and their family members or guests, and its design is capable of exploring waters not often frequented by other 65-footers with deeper drafts.

There are some interesting comparisons to note between the flybridge and the skylounge models. Both have three large staterooms and two full-size heads, fitted and finished with Grand Banks’ hallmark craftsmanship and style. Guests overnight in the spacious forward VIP stateroom and enjoy accommodations usually reserved for owners. The master stateroom is located amidships to port with ensuite head. To starboard is the second
head and single cabin with another cabin aft amidships separated from the engine room by a full-beam utility room. It’s on the main deck level where changes get interesting.

“The lower helm station is eliminated on the Skylounge version of the GB60, bringing the galley forward with added storage and transforming the larger salon seating into two
sitting areas with facing settees to starboard, essentially creating separate relaxing and dining areas,” says Sass. Large windows bathe the main salon and the large, U-shaped galley with an abundance of natural light and clear views all around, perfect for family and friends to relax.

The galley is shaped well for use underway, but its real appeal has a lot to do with the large-area Silestone counters. An electric induction cooktop is standard as is a single-drawer dishwasher, large single bowl Franke stainless steel sink with designer faucet, a microwave/convection oven, and two refrigerators plus a freezer from Isotherm. Hand-selected and finished Burmese teak hardwoods and veneers add golden warmth to every interior detail. A teak and stainless interior stairway to starboard opposite the galley
leads up to the enclosed skylounge, and its see-through design adds appeal to the contemporary open plan of the salon. 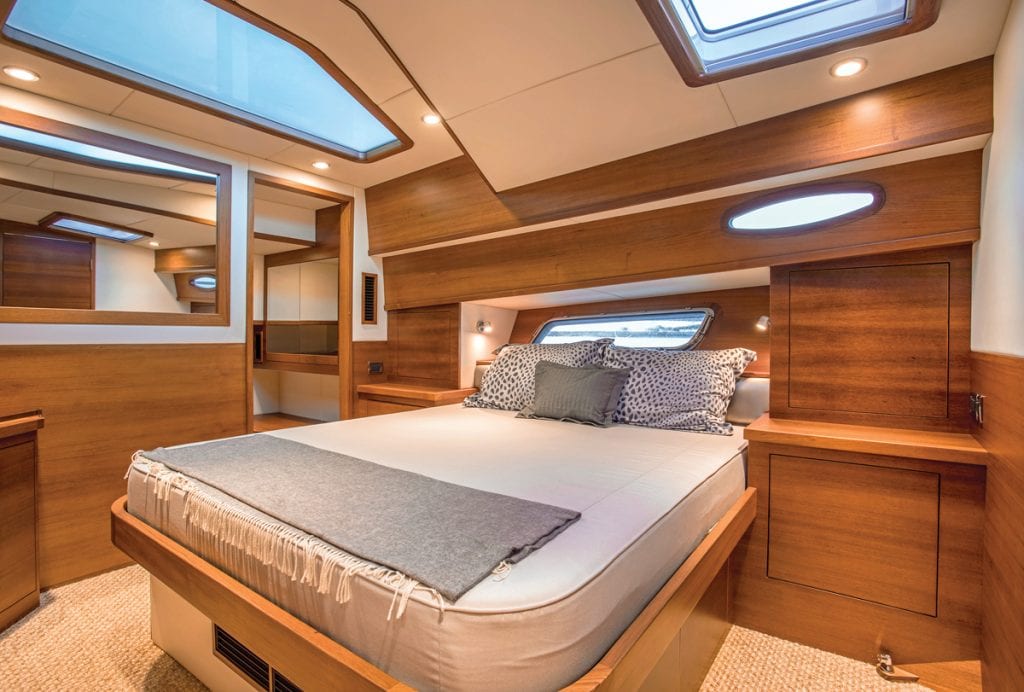 For those who wonder if a skylounge-style flybridge is right for them, consider that it’s a comfortable place from which to operate the boat in temperatures hot or cold, it’s well
protected from high winds and intense sunlight, and it offers twin Stidd helm seats with a magnificent view of the waters all around for safety.

On temperate days, the two side windows as well as the window in the aft bulkhead open or close at the touch of a button and along with two overhead hatches, provide abundant natural ventilation. The designers included an enclosed dayhead to starboard for convenience as well as an L-shaped settee to port that can serve as a berth for the off watch on overnight runs. For those who want to take in a bit of sun, there is outdoor seating on the boat deck, on which Grand Banks furnishes a Steelhead ES1000 Davit plus an AB Alumina 12 ALX RIB with a 30-hp Yamaha outboard.

Grand Banks also offers a full suite of Garmin electronics as an option, including a pair of 8617 MFDs, an autopilot, the GMR Fantom 4 open-array radar, AIS 600, and much more. For those who want to run offshore in stable comfort, a Seakeeper SK9 or Sidepower Vector Fins is available.

To my eye, it is evident that Grand Banks is delivering a design that hearkens back to the days when balance and proportion were prerequisites for a desirable yacht that would be visually pleasing over decades. With a large and well-protected enclosed flybridge, an extended boat deck that helps shelter the aft deck from the elements, and wide side decks with high bulwarks and handholds, the GB60SL is obviously a well-thought-out ocean-going yacht.