All Aboard the Luxury Express

Is the Tiara 43 LE a cruiser, weekender, or entertainer? You decide.

Sporty goes stylish in Tiara Yachts’ Sport Series that now includes three lines built on shared hull designs in the 34- to 43-foot range. The 43-foot Luxury Express (LE) flagship was just added to the existing LS and LX lines. Built atop the proven 43 LS hull, the new LE is an express cruiser that can enclose its double helm and companion seating in motoryacht style, which makes this design very versatile. A bit of history: The LS Series, which also has a 43-footer, is a center console while the LX is a crossover bow rider. The 43 LE takes the day boat aspect of the LS and LX and folds in just the right amount of accommodations and an enclosed interior to broaden its (and your) horizons.

Today, many boats are going “origami” with sassy deck layouts that morph from one use into another, but nobody has dialed in the transformational cockpit quite like Tiara. In 2017, they introduced the rotating lounge on the 38 LS. Sitting on one of these was like being a judge on that popular singing show. It was electrically actuated and as it spun, it drew crowds at the boat shows. But now, three years later, Tiara has upped the game. The lounge doesn’t just spin from forward to aft-facing, it can also stop in the middle while pointing to port where the hull side folds down into a terrace. The lounge also has cupholders in the armrest, a removable table between the two Barcalounger-style seats with leg rests, and a Kenyon grill integrated into the aft section. You can cook either standing on the swim platform facing the cockpit or standing in the middle of the cockpit, closer to the galley, facing aft.

But wait, there’s more. Inside, both the helm and companion seats swivel aft so you can seat at least eight people facing the party and making the 43 LE the ultimate entertainer. Just like at home, the group will gather in the center section around the galley. But if crowds are not your thing, you can always sneak up to the bow (via either side deck) and relax on the double sunbed with pop-up headrests and more cupholders.

Two nice practical touches include the retractable sunshade that extends from the hardtop back to cover the aft deck and the hull side door to starboard for easy boarding and loading from the dock. In addition, the integrated swim platform with extensions outboard of the engines and the telescopic boarding ladder along with a recessed transom shower make swim time a joy. Altogether, this is the kind of cockpit where the eye lingers on one detail after another, and it’s bound to be a conversation starter. 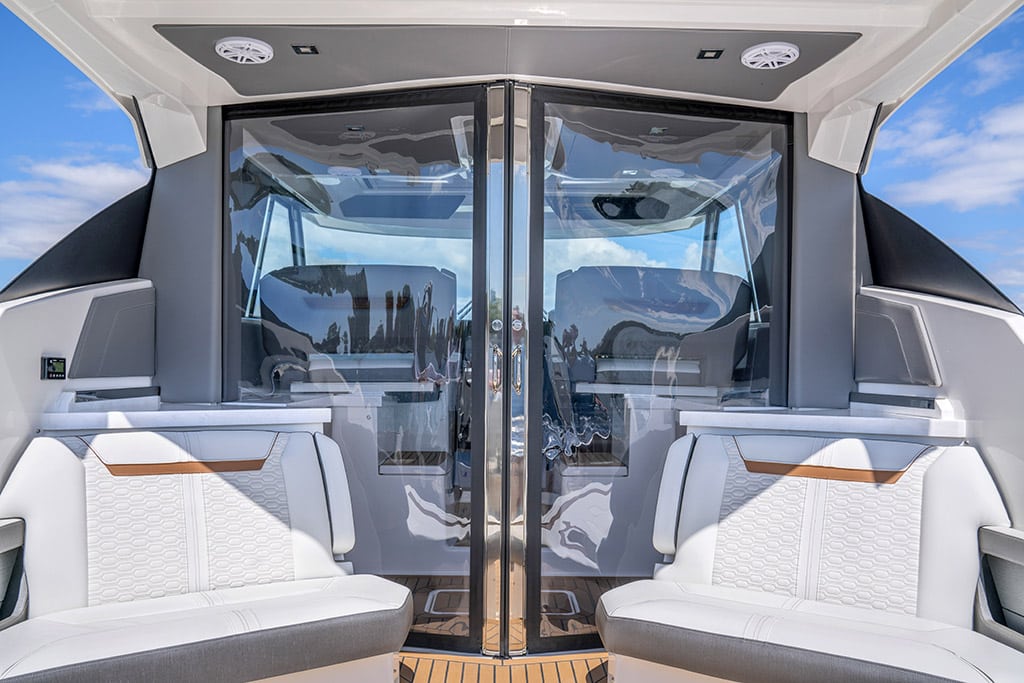 The Ins and Outs

Much like all express cruisers, the 43 LE has an open layout, but that doesn’t mean it has to stay open. Two isinglass and canvas “doors” slide together to create an enclosed helm and galley area so you can keep the cold in or out, depending on your cruising grounds.

The hardtop is nearly full beam, and the custom windshield is tempered glass with sliding windows. With large windows that slide open on each side, the cabin feels like it’s wrapped in glass, so even when you’re inside, you’re still enjoying the outdoors. 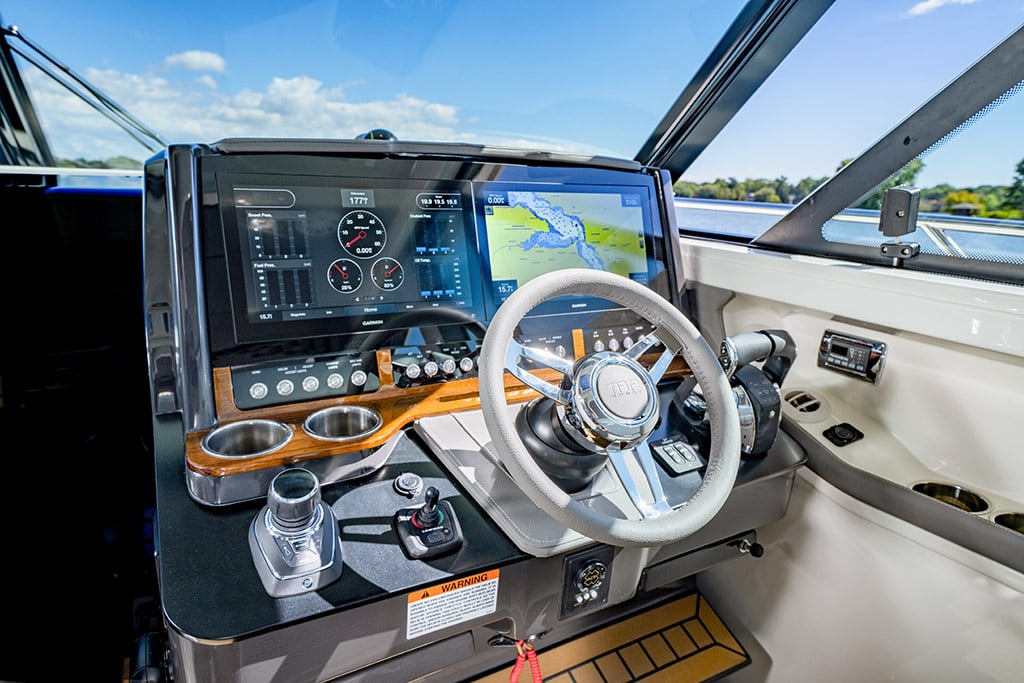 The helm is to starboard. Twin Garmin screens face the driver with a well-ordered row of flush, push-button switches just below. The throttles are outboard and to the left of the wheel is the joystick that’s placed perfectly for a right-handed driver to use while facing aft and backing into a slip. Tiara’s Sport electronics package provides integrated power and control for just about everything at the helm and much of it is controlled from the multifunctional displays (MFD). The driver has two cupholders built into the dash and two more in the armrest outboard, and high and low footrests below the dash accommodate various sizes of drivers. The portside console adds another MFD so the companion has a separate information source and a Fusion stereo head.

Between the two consoles is the door to the accommodations below which include two cabins and a head with a separate shower stall. The master is in the bow with a queen island berth, two lockers, and more stowage space below the bed. Plenty of light pours in through the fixed hull side windows as well as the opening overhead hatch. The second cabin is tight, but it too has a double berth, perfect for kids or the occasional guest. Otherwise, it will make spacious stowage space for all the necessities of an extended outing. Basically, a couple on a long weekend cruise will lack for nothing even if the weather outside is frightful. 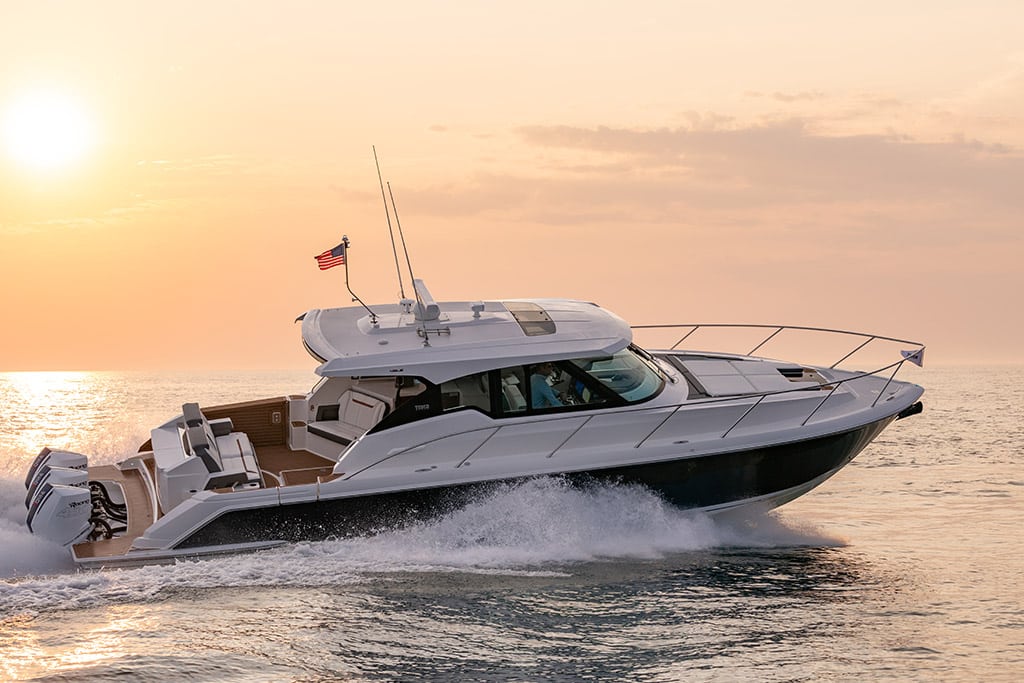 Sure, the 43 LE is comfortable for overnighting and a wiz at docktails, but Tiara’s boats are built to go places, and this one is no exception. After all, she’s in the “Sport” series. You can spec triple Yamaha XF 425-hp outboards or choose Mercury 450R racing engines. That’s 1,350 horsepower in lightweight, high-performance motors that ensure this model is no slouch. For something a little different, you can even opt for outboards by Seven Marine.

What will the 43 LE do with all that power? Depending on load and sea state, expect the top end to be just a kiss above 46 knots. For a more economical cruise, dial back to around 4,000 rpm and 27 knots and you’ll burn around 45 gph, giving you a range of 200-220 nautical miles. You can cruise quite a distance on a tank (400 gallons) if you slow down even more and that means there are few places you can’t venture whether it’s to Bimini, down the Intracoastal Waterway, or out to the Dry Tortugas.

Josh Emmick of Tiara Yachts, who brought the boat down most of the Eastern Seaboard to Fort Lauderdale, gave us a glowing report. With the Mercury racing motors and fully loaded with fuel and water, they topped out at 60 mph with the boat tracking well regardless of some sloppy conditions. In tight turns, the boat dug in and spun easily without ever feeling like she would lose her grip. “The best part was the quiet ride once we closed those doors,” adds Emmick. “It has to be four times quieter with them closed even though that’s just isinglass. We worked with a designer to develop this system so there’s no more messing with canvas and snaps.” 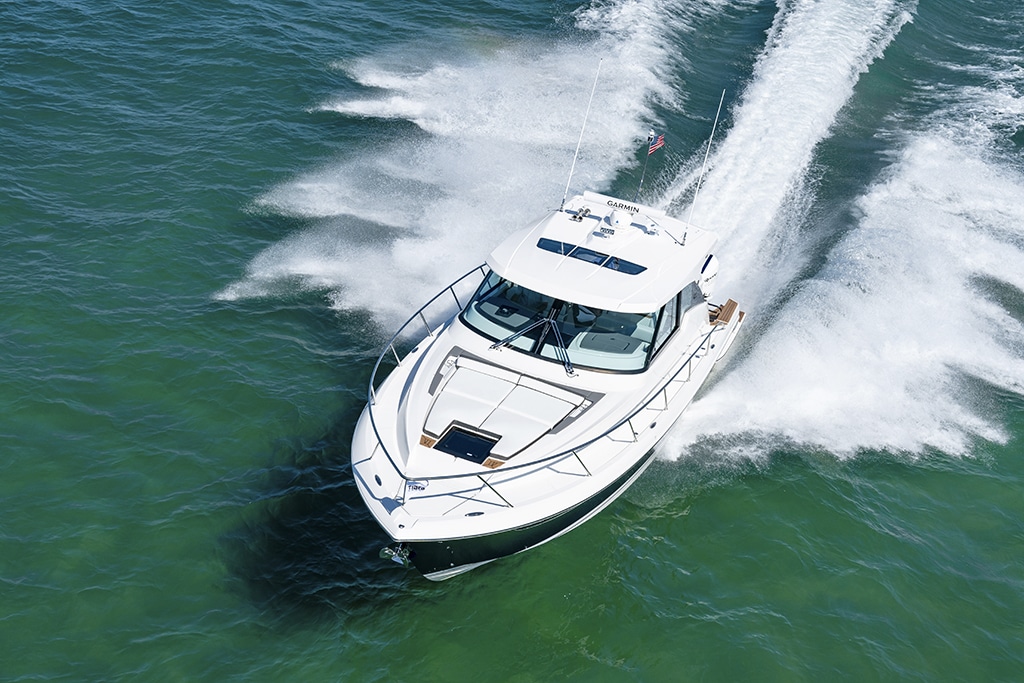 “L” is for Luxury

It’s clear that the Tiara 43 LE is versatile and will do double and triple duty. You want a weekend getaway? She can do that. You want to cruise a swath of the ICW? Check. You want to swing at anchor and have kids jump off the side? Yep. You want to enjoy a bottle of bubbly at the dock with friends? Absolutely. You could even wet a hook while standing on that lovely drop-down terrace, but she’s not really a fishing boat. She’s a multi-tool in the best sense of the word, but she’s the kind of tool you’d buy at Tiffany’s. The finishes are excellent, the design is contemporary, and the engineering is top-notch which all adds up to luxury that will set you back seven figures if you load her up with all the goodies, including a Seakeeper 6 gyrostabilizer. So, the questions remains: Is she a weekender, a cruiser, or an entertainer? Ummm…yes.