Thunderstorms can be dangerous. Here’s what you need to know to reduce your risk.

Although thunderstorms can occur any time of the year, as the weather gets warmer and more humid, they peak in activity. The South is a hotbed for thunderstorms, and while most locations record more than 50 storms a year, some areas of Southwest Florida get over 100.

As one of nature’s most potent hazards, the threats from thunderstorms are multiple. A lightning strike, even an indirect hit, can kill or seriously injure a person, destroy the
electronics on a boat or, even worse, start a fire. Winds can shift 180 degrees in seconds, and wind speeds can top 50 knots. The combination of strong winds and the waves they
generate can capsize large vessels.

There are a number of thunderstorm types, but for our purposes here, we’ll touch on forced and non-forced convection storms. Forced convection storms occur particularly in the fall and spring and are associated with pronounced weather systems, such as cold fronts or low-pressure areas. They can even happen during winter in more southern locations. The storms themselves tend to be stronger especially in terms of wind and often evolve into squall lines that make them difficult to navigate. They can form any time of day and move very quickly over the ground, sometimes more than 50 knots. Squall
lines are groups of storms and are often accompanied by high wind and heavy rain. 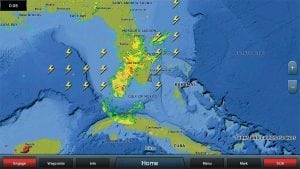 The non-forced, typical “pop-up” thunderstorms of summer (also known as air-mass thunderstorms) develop over land during the heat of the afternoon and early evening. They often form along the sea breeze front as it pushes inland during the day. Although not typically strong, summer thunderstorms in the south tend to be prodigious lightning producers. Only moderately gusty winds are expected with a pop-up storm, but when severe, known as a pulse storm, winds can develop in excess of 50 knots.

At night, the land cools off and storms over land tend to dissipate, but the water remains warm, and an offshore flowing land breeze can develop. Storms that have moved over the water can maintain themselves, and even new storms can develop over the warm waters into the morning. Generally speaking, thunderstorms over water are weaker than those
over land, but that doesn’t mean they can’t produce hazardous conditions. Storms moving off the land over the water would pose the greatest risk to mariners.

This may seem like common sense to experienced boaters, but before you head out on your boat, check the forecast. Be sure to also check the most current weather radar image. This is the best way to tell if thunderstorms have already developed and may be a
threat. Tracking the storms for a time will indicate the direction and speed of
movement.

Newer displays even depict individual lightning strikes utilizing either land or satellite-based sensors. If there is a significant thunderstorm threat, cancel your trip or at least postpone it until conditions improve.

Once you’re on your way, continue to monitor the weather as you go. As mentioned, thunderstorms can develop and move quickly. If you have onboard radar, check it, and as the saying goes, “Keep an eye on the sky.”

Cumulus clouds developing vertically can quickly build into thunderstorms. In any case, you should always have an escape route planned in case the conditions deteriorate.
If you are caught in a storm, stay inside your cabin if you have one. If not, stay as low as you can in the boat. Keep away from metal objects and electronics (unless you unplugged
them). Keep in mind that threats from a thunderstorm aren’t limited to just under the main cloud and rain area.

Watch the water surface. Microbursts are blasts of strong winds that can propagate outward from the parent storm. Wind speeds can exceed 80 knots and may be responsible for the infamous “white squalls.”

Lightning from the top of the cloud, known as “positive giants,” can strike miles from the cloud itself. Consider having a lightning protection system for your boat.

Severe Thunderstorm: A storm that produces a tornado, winds of at least 50 knots or hail at least one-inch in diameter.
Severe Thunderstorm Watch: Conditions are favorable for severe thunderstorm occurrence within a 2 to 8-hour period as given.
Severe Thunderstorm Warning: An event is occurring or imminent.
Special Marine Warning (SMW): Thunderstorms are detected over water or will be shortly moving over water. Winds greater than 33 knots could be expected with the storms.
An SMW could also be issued for 3/4-inch hail or waterspouts which may not accompany full-blown thunderstorms. Such warnings would activate the Tone Alert feature on NOAA Weather Radio and would also be issued by the Coast Guard and appropriate commercial radio stations.
There are no specific NWS warnings for lightning. If thunderstorms are mentioned in a forecast or actual report, the potential for cloud-to-ground lightning is always inferred.

Carolina Boat Shows Mark the End of the Season