The latter days of summer still bring warm temperatures and typically good weather to enjoy being near, on or in the water. But they can also bring great storms in the form of hurricanes. In fact, although the official hurricane season is from June 1st to November 30th, the peak of the season is from mid-August to mid-September, when ocean temperatures are at their highest—fuel for hurricane development. What can we learn from the hurricane lessons of 2017?

What’s in a name?

A hurricane is a type of tropical cyclone, i.e., a low-pressure area that only forms over warm water. It contains bands of showers and thunderstorms that rotate counterclockwise around a center (the eye) and extend outward for as much as several hundred miles.

Actually, the term “hurricane” indicates the strength of the storm. Hurricanes have sustained winds greater than 73 mph. Systems with winds between 39 and 73 mph are classified as tropical storms, and those with winds less than 39 mph are called tropical depressions. Hurricanes themselves are also ranked in terms of strength according to the Saffir-Simpson Scale—categories of one at the low end to five at the high end with sustained winds exceeding 156 mph. (Gusts can approach 200 mph.) 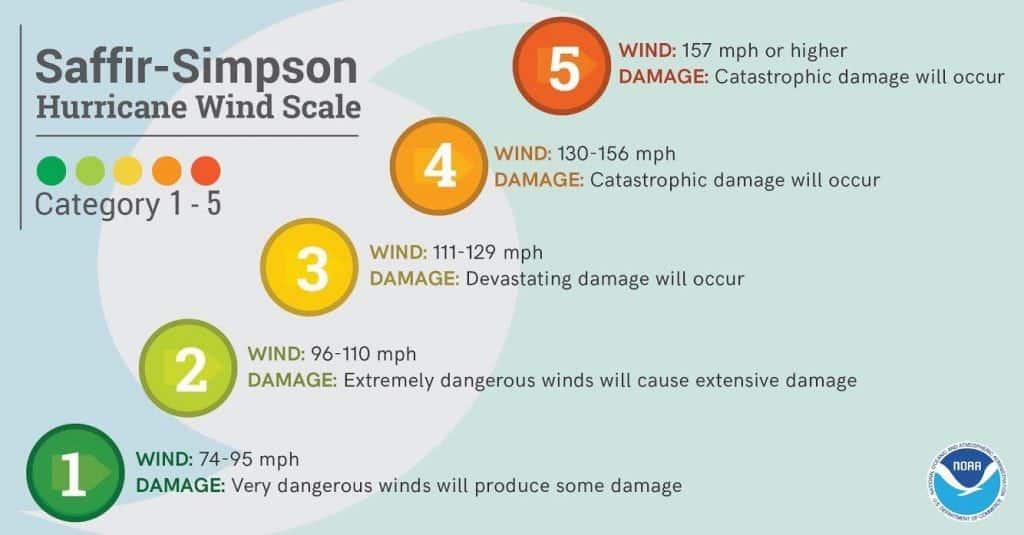 The greatest threat to ships at sea comes from the strong winds and the high waves they can generate. Stronger and larger storms will produce the highest waves. In fact, measured waves have exceeded 50 feet and, theoretically, a rogue wave in that environment could exceed 100 feet. In those conditions, a boat can easily capsize and sink, and keep in mind that rescue efforts are nearly impossible.

For beachgoers, even if the storm is far off, swells can make for dangerous surf conditions. As the storm nears, waves become higher and more frequent, and strong rip currents can be expected. Along the coast, the greatest threat comes from the strong winds and, especially, storm-induced high tides. “Storm surge” is an inland rush of water caused by strong onshore winds. High waves on top of this surge can literally smash structures. Storm surge is highest with stronger and larger storms and maximum where the center crosses the coast. Hurricane Katrina produced a storm surge of nearly 28 feet at Pass Christian on the Mississippi Gulf coast, and the surge pushed inland at least six miles.

Even boats at a dock face risks. The risk magnifies with the strength of the storm and the proximity of the eye. Strong winds and high waves can batter a boat against the dock itself, and restraining ropes can break under great stress. A significant storm surge can drive a vessel far inland and as the storm moves by, the wind direction will change by as much as 180 degrees. A more sheltered, inland port is a better alternative.

As you move away from the immediate coast, wind can still do damage. In particular, trees are broken or uprooted, which can take out power lines. That was the case in Puerto Rico with Hurricane Maria. In addition, there is also a significant concern with the heavy rain that can produce inland flooding. Hurricane Harvey, for example, dumped over 60 inches of rain in the Houston, Texas, area last September causing the catastrophic flooding there. If this wasn’t enough, tropical cyclones, when they start affecting land, can generate tornadoes and are most likely to occur in the right front quadrant of the storm. Hurricane Harvey produced 57 tornadoes.

Be in the Know

There is only one official source of hurricane information: The National Hurricane Center (NHC) in Miami, Florida. Media outlets and even private weather companies get their information from the NHC. The Center will send out storm bulletins every six hours or every three hours if the storm is endangering land. The Tropical Cyclone Public Advisory gives a plain language account of the storm, including current strength and location and forecasts for future strength and movement out to five days. This information is also provided in map form. The Forecast Advisory adds marine information for areas predicted to be in the path of 64-, 50-, and 34-knot winds and 12-foot seas.

The NHC will issue specific watches or warnings as needed. Watches mean dangerous conditions are possible within 48 hours and to take necessary precautions. Warnings mean a more definite and immediate threat (within 36 hours); seek shelter or evacuate if ordered. Besides tropical storm or hurricane watches and warnings, a storm surge watch or warning is for “life-threatening inundation from rising water,” and an extreme wind warning is for winds in excess of 114 mph. All of this information is also provided by local National Weather Service (NWS) offices. For marine interests, consult the marine forecasts issued by the NWS.

There is a more traditional warning system used at select small boat stations along the coast: the U.S. Coast Guard’s warning display flags. Tropical storm warnings are indicated by a single red flag with a black rectangle in the middle. Hurricane warnings are represented by two of those flags. For more information on Marine Safety during hurricane season, go to nhc.noaa.gov/prepare/marine.php

How to Install Rod Holders