Some see the need, open their hands and provide. Read about three people giving back to the marine industry.

In today’s tumultuous world, our daily news feeds are filled with reports of hurricanes, wildfires and other natural and unnatural disasters. Of particular interest to the southern
U.S., The Bahamas and the islands of the Caribbean, the 2017 hurricane season was one of the most destructive on record. Foundations and organizations of all kinds ask us to
dig deep into our conscience and, sometimes, our wallets assist in giving back to those affected.

At the same time, corporations have found that “giving back” and the demonstration of good corporate citizenship is in high demand, realizing that customers show brand affiliation to those organizations who made giving back a core part of their business’s vision, creating a hot, new trend toward socially conscious marketing. Yet while all this activity is trending as of late, there are many boating enthusiasts and marine industry companies who have been quietly giving back to those in need long before there was a hurricane approaching the shore or a marketing playbook that made the practice fashionable. 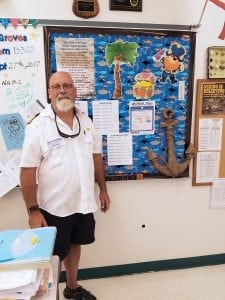 A few years ago, this Tampa, Florida, resident stumbled upon the opportunity to help a group of high school students less fortunate than his high-school aged daughters. Martin, a U.S. Navy retiree, works as a commercial boat captain in the Gulf of Mexico and owns a 31-foot Century that he uses for fishing and spending free time with his family.

When Martin enrolled his music-loving daughters in Howard W. Blake High School’s Magnet program, geared toward kids with a passion for the arts, he soon learned that the majority of the students outside of the prestigious arts program were in disadvantaged situations and had limited opportunities. He also noticed that the Tampa area shipyards were in desperate need of skilled workers. Martin’s work schedule allowes him the free time to get involved, so he approached the school to implement a maritime training program. The goal was to teach students a viable skill set as an alternative to college as well as to fill a gap in the labor market.

The majority of the students who enrolled in the class initially thought it would be an easy elective, but ultimately, many developed an interest in a field that they would never have had access to or previously considered. Martin spends time teaching them about the types of skills needed to become a welder, deckhand, captain, naval architect, and other positions in the industry. His courses include the basics of navigation, an overview language of boating and assistance with a career path. At the end of the class, he brings his boat to the school for a cruise on the ICW and even an opportunity for students to take the helm.

Throughout the marine industry, there are companies whose core values guide not only their commitment to manufacturing excellence but also their compassion for others. Dometic is one such company, and it specializes in products that make life easier for those who enjoy a mobile lifestyle on yachts and in RVs while traveling. In the summer of 2017, the company stepped up to donate a key ventilation product that supports
the Cleansing Hope Shower Shuttle, an initiative providing mobile showers to the homeless community in San Francisco.

The California initiative was a huge success and is on track to spread nationwide. Dometic’s vision to support the homeless did not stop there. At their Elkhart, Indiana, headquarters, it was discovered that an employee applied for housing assistance with Habitat for Humanity, an organization that helps those in need get assistance with home ownership through new construction and renovation performed by applicants and volunteers.

Dometic organized a panel build (prefabricated wood-framed walls) in the company’s parking lot and encouraged employees to take a shift during work hours to help build a home for their co-worker. Dometic plans to continue their efforts both locally and on a national scale.

John Weller, a long-time yacht broker with Camper & Nicholsons International, faced a fight for his life 13 years ago when he received a cancer diagnosis. Weller began a long
road to remission that led him to Houston’s renowned MD Anderson Cancer Center to receive life-saving care. Going through treatment, Weller’s heart was touched when he saw the number of cancer-stricken children with devastated family members standing by their sides.

He was so affected by what he saw that he decided there and then to do what he could to bring joy into the lives of these families. In 2004, Weller got involved with the Freedom Waters Foundation, whose “mission is to improve the lives of individuals with special needs and veterans by providing therapeutic marine-related experiences on the waters of South Florida,” which resonated with Weller. The foundation’s programs started with South Florida families through Joe DiMaggio’s Children Hospital and have since branched out to other areas.

The veteran’s program launched in 2012 and takes place on board Mariner III, a 122-foot classic motor yacht built in 1926. THe boat is based in New York in the summer and West Palm Beach, Florida, during the winter months. Captain/owner Sean Kennedy lends his yacht and his services to honor the veterans who have sacrificed so much. Military veterans from World War II, the Korean War, the Vietnam War, the Gulf Wars, and Afghanistan have been on board this antique boat with their families to enjoy a day full of food, music and Florida sunshine, all supplied by generous people with big hearts.

While giving back may be top of mind lately, it’s often the quiet volunteers among us doing the most impactful and heartfelt work. From creating new opportunities for disadvantaged students to putting a smile on the face of veterans and cancer patients and helping the homeless live with dignity, the boating community steps up to give back in a multitude of ways.

The Art of Boat Building: Jaruco