The U.S. Coast Guard celebrates 226 years of proudly serving America on August 4, 2016. Located within the Department of Homeland Security, the Coast Guard performs several critically important missions, from interdicting drug smugglers far out at sea to safeguarding the marine environment. However, the Coast Guard is also one of the nation’s five armed services, and has fought in every major American conflict since its founding in 1790.

When the nation’s first Department of Treasury Secretary, Alexander Hamilton, founded the service that became the Coast Guard, it did not have an official title. It was simply referred to as “the cutters” or “the system of cutters.” Hamilton established this fleet to enforce tariff laws, so these cutters were armed but manned by civilian crews under the Treasury Department. Since the Continental Navy was disbanded in 1785, there was no navy initially under the Constitution and the cutters were the only maritime force available to the new government. Between 1790 and 1798, Hamilton’s cutters were the only armed vessels protecting the coast, trade, and maritime interests of the new republic.
Between 1797 and 1801, the U.S. and France fought an undeclared naval war known as the “Quasi War.” However, without a navy early in the conflict, American authorities conscripted revenue cutters to help battle French privateers.

With an urgent need for naval vessels trumping the need for law enforcement vessels, Congress passed legislative acts authorizing the president to employ the cutters to defend American sea coasts and commercial vessels, deploy Marines to serve aboard cutters, put cutters under the same wartime rules, regulations and compensation as the re-established U.S. Navy and transfer cutters from the Treasury Department to the Navy Department in time of war. These legislative acts dictated the use of civilian-manned cutters in wartime until 1915, when Congress altered the status of the service from a civilian agency to a military one.

With the exception of the Barbary Wars, the Revenue Cutter Service participated in every American naval conflict of the 1800s. With each new conflict, the service added new combat roles. The War of 1812 marked the beginning of cutters engaging in shallow water combat operations, a wartime mission the service has conducted ever since.
During the Seminole Wars, cutters attacked war parties, broke up rendezvous points, rescued survivors of raids, transported troops and supplies and wrested inland waterways from Seminole control.

During the Mexican War, revenue cutters continued their earlier combat missions and added the assignment of blockading enemy ports. In the Civil War, cutters undertook new missions of shore bombardment, command ship duty and offshore blockade enforcement.
The Revenue Cutter Service also rendered conspicuous service during the Spanish-American War with cutters serving in Caribbean theater and, for the first time, in combat operations outside the Western Hemisphere, including the Battle of Manila Bay.
In January 1915, President Woodrow Wilson signed the “Act to Create the Coast Guard,” merging the U.S. Life-Saving Service with the U.S. Revenue Cutter Service. The act formally designated the new “Coast Guard” as a military service. On April 6, 1917, the day the U.S. formally entered World War I, Coast Guard activities transferred from the Treasury Department to the Navy.

During the 1900s, the Coast Guard underwent a great deal of change, including the introduction of aviation to the service, a merger with the U.S. Lighthouse Service, a rapid influx of assets and personnel, formation of the Coast Guard Reserve and Coast Guard Auxiliary, racial and gender integration of the service, the development and implementation of new technologies, such as long-range navigation (LORAN) stations and the helicopter, and the addition of the former Bureau of Marine Safety and Navigation (which became permanent in 1946). 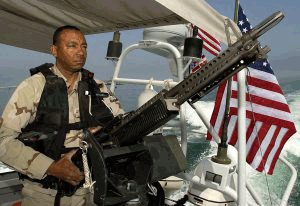 Whether equipped with civilian-manned sailing cutters of the 18th century or modern National Security Cutters manned by military personnel, the Coast Guard has always been prepared to fulfill its defense mission. Regardless of the maritime threats and challenges confronting America today and tomorrow — whether it’s rescuing mariners in distress, protecting our nation from illegal drugs, preventing and responding to oil spills, or safeguarding the nation against military threats — the Coast Guard continues to protect the nation from threats to its maritime interests at home and abroad and will always be Semper Paratus, or always ready, whenever and wherever needed.

A Brief History of Rum at Sea