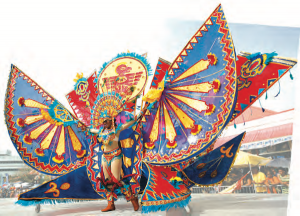 After a quarter century of successful jazz concerts that put St. Lucia on the map for great international entertainment, government officials have decided to spread the wealth by now offering visitors six festivals to enjoy from May through November. Soliel kicked off in May with the traditional jazz fest at Pigeon Island National Landmark. The party continues this month with Roots & Soul, June 16-18, featuring reggae, hip-hop and R&B. Then, it’s St. Lucia Carnival, a three-week extravaganza from mid-June to mid-July that revs up to the big Parade of the Bands July 17th and 18th. The tenor takes a notch down to a more laid-back pace from August 24-27 for the St. Lucia Food & Rum Festival. This taste-tempting event features culinary demonstrations, rum and wine tastings, and dining experiences that pay tribute to both St. Lucian and international dishes and drinks. The Country & Blues Festival occurs September 15-17, followed by the monthlong Arts & Heritage Festival in October. This means there’s plenty of fun on this Windward Island all summer long. Even better, summer is slow season in the Caribbean, so anchorages are not crowded.

Plus, it’s easy to find dockage at either of the island’s two big marinas: the 253-slip IGY’s Rodney Bay Marina to the north in Gros Islet and the 42-slip Capella Marigot Bay Marina to the south mid-island. Additionally, Rodney Bay has a full-service boatyard, so it’s possible to haul out and work by day and enjoy six festival’s worth of parties by night. stlucia.org/summerfestivalo. 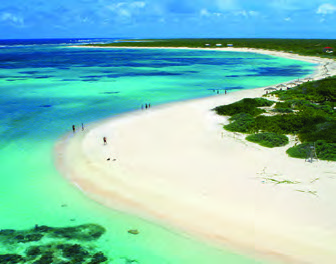 What are some of the top off-the-beaten-track beaches in the Caribbean? Global charter yacht company, The Moorings, let the cat out of the bag earlier this year by naming its seven favorites. North to south, the first is Playa Tamarindo, a small coral-strewn beach on Puerto Rico’s offshore island Culebra, where “unspoiled” is truly defined. On the sandbar called Anegada, both Loblolly Bay and Cow Wreck Beach—two of the British Virgin Islands’ (B.V.I.) three beaches—offer a delightful mix of Robinson Crusoe seclusion combined with all the comforts of the tropics, like cold beer and hot grilled lobster. Neighboring Guana Island, home of the luxurious all-inclusive resort of the same name, features the haven known as White Bay. Further south, two islands off Anguilla and St. Martin make the list. One is the duo of Prickly Pear Cays, uninhabited except for a small beach bar manned by day, where the sand is as soft as powdered sugar. The other is Tintamarre, nestled within the St. Martin Nature Reserve. The red clay-like mud here is said to have healing as well as beautifying powers. Finally, there’s Anse du Gouverneur on St. Bart’s—pristine, private and picturesque. Moorings bases in the B.V.I. and St. Martin make this septuplet of best-kept secret beaches easily paradise found. moorings.com

For more information on happenings in the Caribbean, take a look at these Anguilla Villas!