A Tasty Trip Through the North

From pizza to chowder to lobster rolls, rich, flavorful fare calls foodies to this region.

The northeastern United States is a perfect illustration of the American melting pot. Every wave of immigration passing through New York’s famed Ellis Island brought with it eager laborers from different cultures and traditions. In the late 19th and 20th centuries, they toiled away building America: raising skyscrapers and cities, assembling infrastructures, and manufacturing goods.

Thrilled by this new country, they still hungered for the familiar flavors of home. A dedicated few worked to recreate the comforting food of their native land with the ingredients accessible in their adopted motherland. From coastal cities to mill towns along the rivers of New England to cities inland connected by rail, communities of migrants from Ireland, Germany, Italy, Greece, Portugal, Russia, Poland, and Asia (among many others) brought their regional dishes. As these foods gained in popularity, they too migrated and changed based on location and available ingredients. 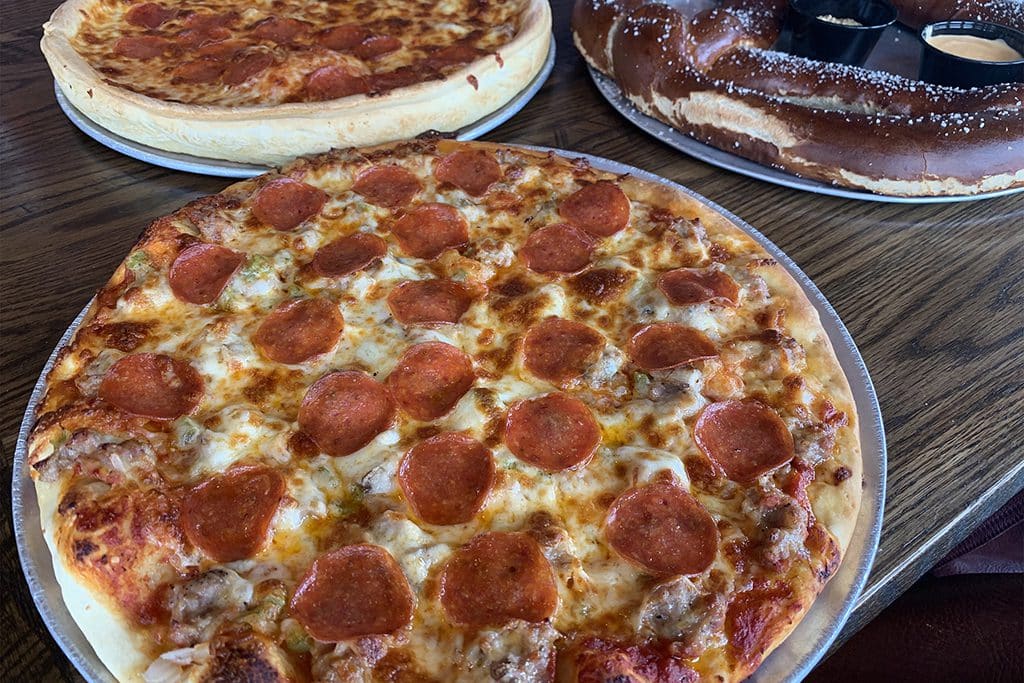 Pizza is a perfect example. New York City and New Haven, Connecticut, about 80 miles apart, were desperate for laborers. Political strife and economic struggles in Naples, Italy, sent many young workers over to America in search of a better life. An enterprising few endeavored to bring this beloved peasant food from their native land. The dishes evolved into subtly different versions. New York City pizza is mostly recognized as a by-the-slice offering. It’s a complete meal by itself: The giant, sturdy, twice-baked slices can hold any number of hearty toppings.

When visiting the Northeast, disavow yourself of pizza as a delivery food cooked on a fast-food conveyor belt. Instead, embrace the pizzaioli standards of brick or deck ovens, where temperatures achieved by different fuel sources impact the final product.

The New Haven version, called apizza (pronounced ah-petz), has reached cult status. Baked at higher temperatures achieved by wood fires, it has a moist, thin crust, which means the toppings are also spread sparsely. Because of its refined and delicate nature, apizza is always sold by the whole pie. People are willing to wait in line for hours in any of New Haven’s three apizza darlings, all within blocks of one another in the famed Wooster Square neighborhood: Pepe’s, Sally’s, and Modern.

Moving west, pizza gets hectic (some say heretic) with Chicago’s deep-dish pizza: a thick, doughy crust lining a three-inch-deep pan, covered with a substantial layer of cheese, a hearty amount of rich tomato sauce, meats, and vegetables, topped with more dough and maybe another sprinkle of cheese. While it’s eastern, flat pizza cousin bakes in mere minutes, the dense Chicago version can take up to an hour.

Detroit pizza is a rectangular, doughy, focaccia-style pizza cut into squares as opposed to wedges. 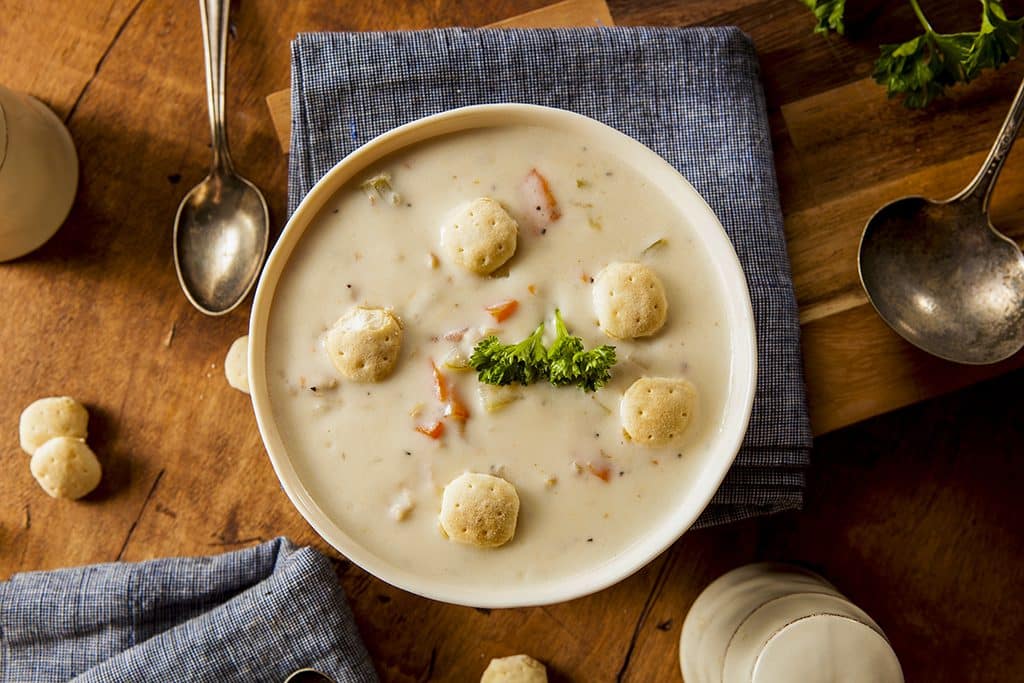 The shores of New England are rich with seafood—specifically bi-valves like mussels, clams, and oysters. If you’re an oyster fan, sampling fare from any of thousands of bays from Long Island up to Maine offers a vast array of flavors and textures. But don’t overlook the humble clam. The only northeastern rivalry more intense than Yankees versus Red Sox is chowder distinctions.

All clam chowder is a soup made of large quahog clams, onion, and potato, but the agreement ends there. Rhode Island Chowder has a clear, briny, seafood broth. Manhattan chowder is made with tomatoes and green peppers because of Italian immigrants. The New England version is a thick, creamy, almost stew-like dish, sometimes with celery or sherry. It bears the closest resemblance to its trans-Atlantic counterpart, a French seafood stew. Hartford chowder is the ultimate abdication of decision-making: one bowl with a ladleful each of Manhattan and New England chowders.

Also hotly debated in the chowder department is the presence of pork and/or thyme. Is either a welcome addition? Does bacon overpower the delicate sweetness of fresh clams? If you add thyme, can you taste anything else?

Every restaurant and diner along the coast will boast their version is “award-winning.” The only way to find out is to taste them all. Something to note: Oyster crackers accompanying all chowders do not contain oyster. 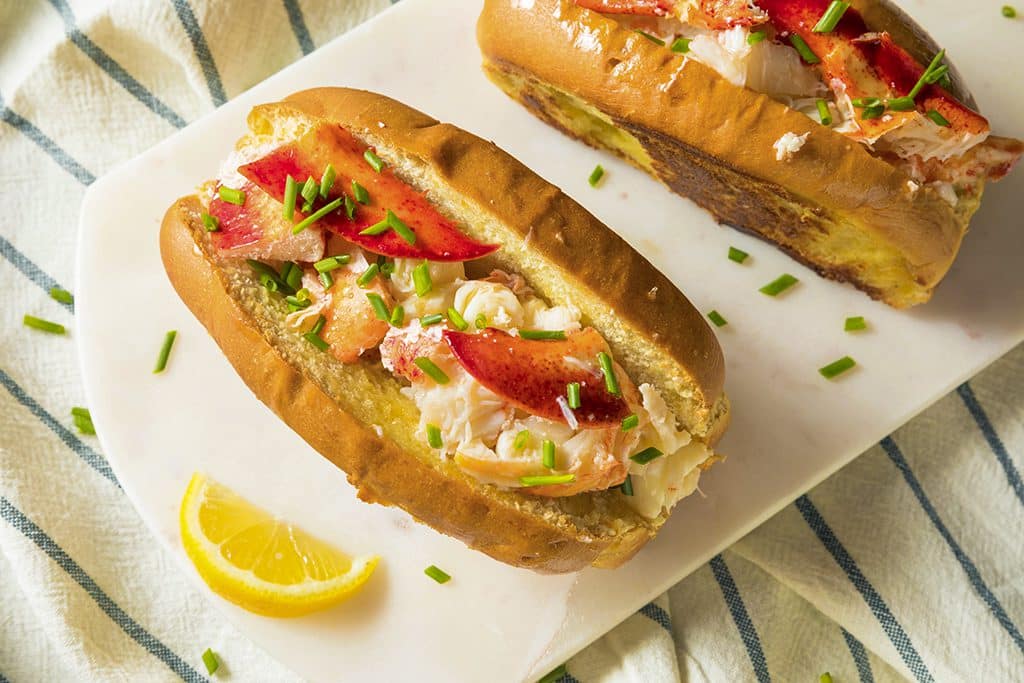 Clams are often overlooked for their far more glamorous cousin the lobster. At one time, these cold-water crustaceans were considered pests and purported to have washed ashore in piles. Native Americans used them as fertilizer and bait. Early settlers fed this cheap source of protein to children, laborers, and slaves. Fast-forward through developments in canning processes which allowed the meat to be preserved, advancements in train transportation which afforded greater travel between landlocked folk and coastal lobsters, and more Americans were exposed to the succulent flesh. This one-time peasant food underwent a glow-up to the luxury food we know it as today.

The Atlantic or Maine lobster is meatier, with larger tails than its Caribbean cousin. When fresh, they’re best showcased very simply. Forget fancy preparations, find a lobster pound on the water who’ll pluck a critter from a holding net in the sea and plop it straight into a steam bath, then serve it up with some drawn butter and a side of slaw.

A lobster bake (also called a clam bake) is a version of the Native American ritual of lining a well in the sand with fire-hot rocks and wet seaweed before adding lobsters, shellfish, and vegetables then covering with more seaweed. The heat from the rocks forces steam from the wet seaweed which slowly cooks everything together.

The finest lobster meal, however, is the simple lobster roll. There are two distinct camps of lobster rolls; you will be asked to swear allegiance to a tribe.

Both rolls involve chunks of cooked lobster heaped in a bread roll—not just any roll, one purpose-designed for filling with fresh New England seafood. This split-top version of a hot dog bun has flat sides for buttering and toasting, but also stands up quite nicely so the filling overflows the top and doesn’t spill out the sides.

Connecticut lobster rolls are served warm with the lobster drenched in butter. The Maine version is a cold mayonnaise-based salad with chunks of celery. The uninitiated may claim
they are equal, but it is a well-known fact that a warm, buttery lobster roll is far superior. 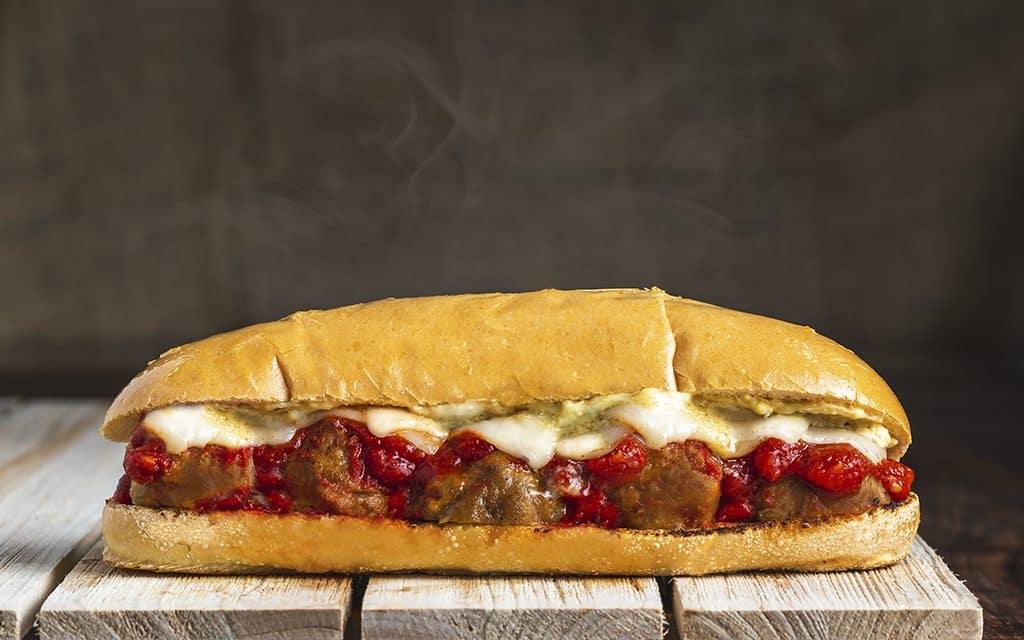 The stuffed sandwich on a long, soft roll nationally recognized as a submarine or sub goes by different regional names.

In Pennsylvania, it’s called a hoagie, while cosmopolitan New Yorkers refer to it as a hero. In the rest of New England, you can call it a sub if it’s stuffed with cold food, but the hot version (meatballs, chicken parm, eggplant parm) is a grinder.

While technically a hoagie, the cheesesteak, or Philly cheesesteak, doesn’t really need a last name. It’s the ultimate in street food: The hearty roll can be eaten standing or walking, and the thin-shaved beef strips and sliced onion are cooked quickly on the grill of a food truck or cart.

Also in Chicago, the Jibarito (pronounced he-ba-reto), is a bread-free Puerto Rican/American hybrid with fried plantain, slices of sandwich beef, chicken, or pulled pork, along with garlicky mayo, tomato, American cheese, and lettuce.

Whether or not you consider hot dogs as sandwiches (you shouldn’t), every Northeastern area has its own version, the base of which is always a local dog and never from a food service or giant conglomerate. You may be familiar with New York’s version, with spicy brown mustard and sauerkraut, but what about Chicago’s on a poppy seed bun with onions, yellow mustard, peppers, celery salt, tomatoes, and NO ketchup? In upstate New York, you’ll find a Michigan or just michigan, which is a red-hot dog topped with a minced-meat chili. In Michigan, they call a similar dog a Coney, while in Rhode Island, their twist on that is a New York System. It’s like a giant Möbius strip made of frankfurters.

The Northeast has so much more to offer and to taste, such as egg sandwiches on an amazing array of soft European-inspired bread rolls, the Chicago steakhouses, local small-batch maple syrups, cheeses from the sprawling pastures of Vermont, Pennsylvania, Ohio, and Wisconsin,  Rhode Island’s coffee milk, and Del’s lemonade. Don’t be afraid to try it all.

A Beginner's Guide to Chartering a Yacht