A Tasty Trip Through the South

The many cultural styles and flavors that define cuisine in the southern U.S.

Is fried chicken the first thing that comes to mind when you think of Southern food?

You wouldn’t be wrong, but there’s so much more.

The southern United States covers a massive swath of land, about one-quarter of the continental United States. Its northern borders begin in Maryland and Virginia, stretch across West Virginia, Kentucky, Tennessee, Arkansas, Oklahoma, and down through Texas. It crawls along the Gulf of Mexico through Louisiana, Mississippi, Alabama, all the way down to the tip of Key West in Florida, and along the East Coast states of Georgia, South Carolina, and North Carolina.

At almost one million square miles, the South encompasses different climates: arid deserts of Texas, swampy bayous of Louisiana, the cool Appalachian mountains, tropical southern Florida, the Lowcountry and out islands of the Atlantic coast, and the temperate zone of Virginia and Maryland.

Additionally, there are myriad cultural influences upon the area: indigenous populations, immigrants from Mexico, Spain, France, England, and enslaved persons from West Africa, along with newer waves of immigration from India, Asia, the Middle East, and Western Europe. It’s no surprise that with so many climate and cultural impacts, Southern cuisine covers a vast array of styles, flavors, techniques, and ingredients. 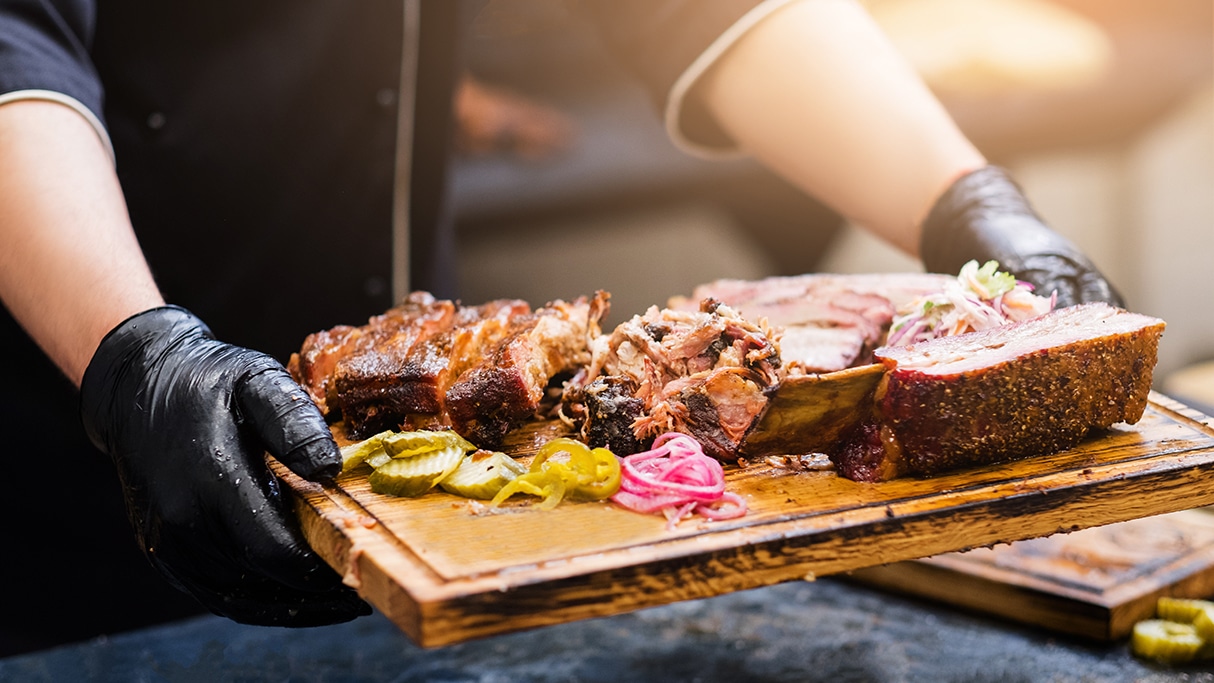 Southern barbecue is many things, but burgers and hot dogs on a gas grill isn’t one of them.

Also known as pit barbecue, it evolved from indigenous people’s method of cooking meat in an oven dug into the earth. Contemporary barbecue has three main ingredients: woodsmoke, meat, and a sauce or seasoning. Far from simple, the combination of cuts of meat, techniques, and styles creates a wide variety of barbecue. Pit masters tend to be a fiercely competitive bunch. This results in constant tweaking and improving of all three components—and tastier fare for your dining pleasure.

It isn’t the high heat from the fire that breaks the animal proteins down, but the long and low heat from smoke, which also imparts a distinctive flavor to the meat. This lengthy process can take up to 18 hours or more and requires skillful fire tending to keep the heat
and smoke consistent.

The Carolinas, Kentucky, and Memphis barbecue pork, specifically the tough, sinewy cuts that benefit from long, slow cooking. Texas tends to prefer beef barbecue because of its cattle farming.

The seasoning is pretty contentious. North Carolina is all about a vinegar and spice sauce, while South Carolina adds mustard. More landlocked places eschew a wet sauce entirely and use a dry rub of spices. Texas will incorporate a little bit of each. In Texas, you’re likely to have your barbecue in or on a tortilla, which brings us to Tex-Mex. 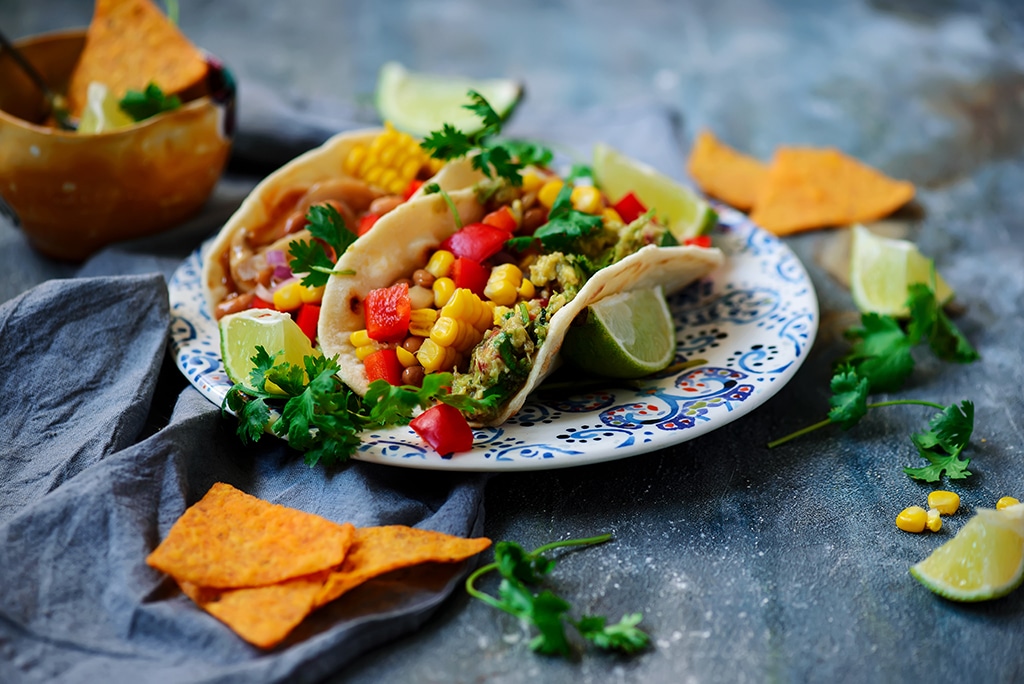 Tex-Mex cuisine is a very distinctive spiced blend of cheese, beans, meat, and flatbread. Born in the region that was northern Mexico, which is now southern Texas, its components hail from all over the world.

Chili, or chili con carne, is the richly flavored beef stew born of the cattle drives. No self-respecting bowl of Texas chili (aka Texas red) contains beans, hominy, or macaroni. Like barbecue, you’ll find regional variations whose adherents will defend it with their lives. The Mexican diet, heavy in beans, is where legumes come into play in this dish and cuisine.

It is chili’s distinctive seasoning that grounds Tex-Mex food.

The spicy bold and piquant flavor of chili powder is a blend of spices. Dried chili peppers are ground and mixed with cumin (introduced by Spanish missionaries), oregano, and paprika. The technique and first commercially available blend is credited to a German cafe owner near San Antonio.

Then there are the tortillas—round, unleavened flat breads. Originally made of maize or hominy, they were the mainstay of the Aztec and Mesoamerican diet for thousands of years. The introduction of wheat from European settlers allowed a softer bread, and in the late 1800s, Tejanos in northern Mexico created flour tortillas.

Add all these components together—richly spiced meat and beans, creamy cheese, and tortillas—and you have the deliciousness of Tex-Mex.

When you find yourself in Texas, also look for kolaches—sweet, soft pastries filled with cheese or fruit. These treats, a gift from Czech immigrants, is another true Texan food. 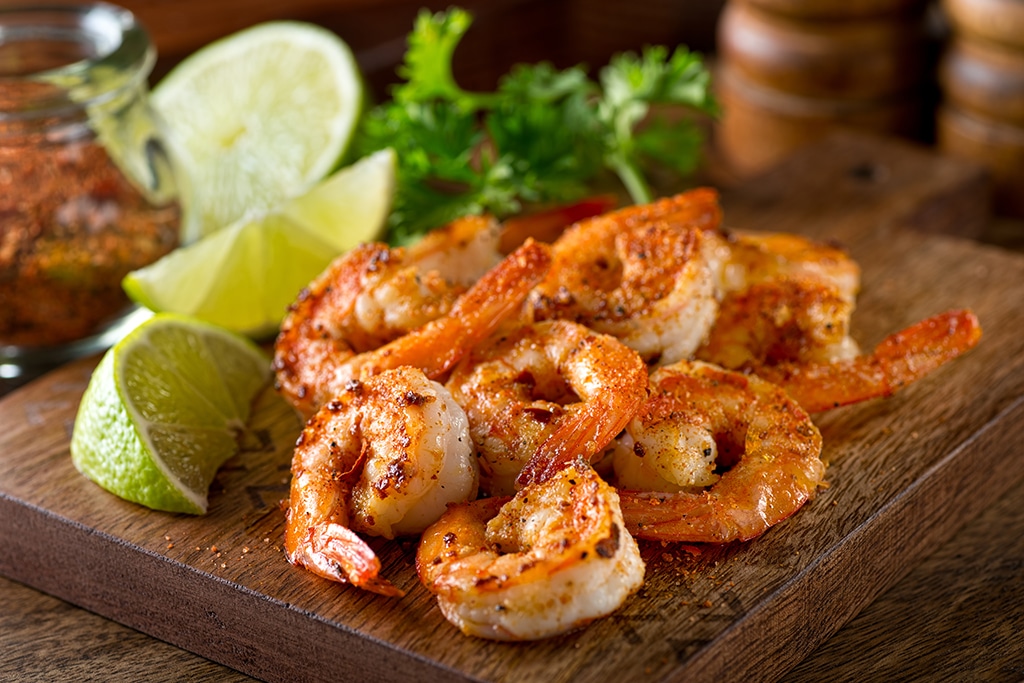 Moving east along the Gulf coast to the swamps and bayous of Louisiana, we find a completely different style of food—or rather, two: Cajun and Creole cuisine. Don’t be fooled; they are not the same. The most noticeable difference is the presence of tomatoes. Creole dishes will have tomatoes while Cajun won’t.

Let’s back up. Think of Cajun as the country cousin of Creole, the city. Cajuns are descendants of Acadians, the French who settled in the Canadian Maritimes. In the 1700s, ousted from their cold colony by the British crown, they migrated to the wilds of Louisiana. Their culinary traditions were strong, but the available food sources differed from anything they knew.

The traditional French mirepoix of onion, celery, and carrot morphed to the Cajun holy trinity of onion, celery, and green pepper. Shrimp, oysters, crab, catfish, red fish, and even alligator replaced the salmon, haddock, and cod they loved. They swapped their beloved potatoes for rice, which grew plentiful in their new, wet, rural home.

Creole cuisine, conversely, evolved in the cities and wealthy households of French and Spanish settlers along the coast. Most food was prepared by the help, many of whom were enslaved Africans, who brought their own culinary techniques and styles. These original chefs of Creole cuisine tried to make use of as many flavors and spices as came into the trading port (like luxurious canned tomatoes). Remoulade sauce, with almost a dozen different ingredients, is a condiment for someone with ample time, money, storage space, and refrigeration. 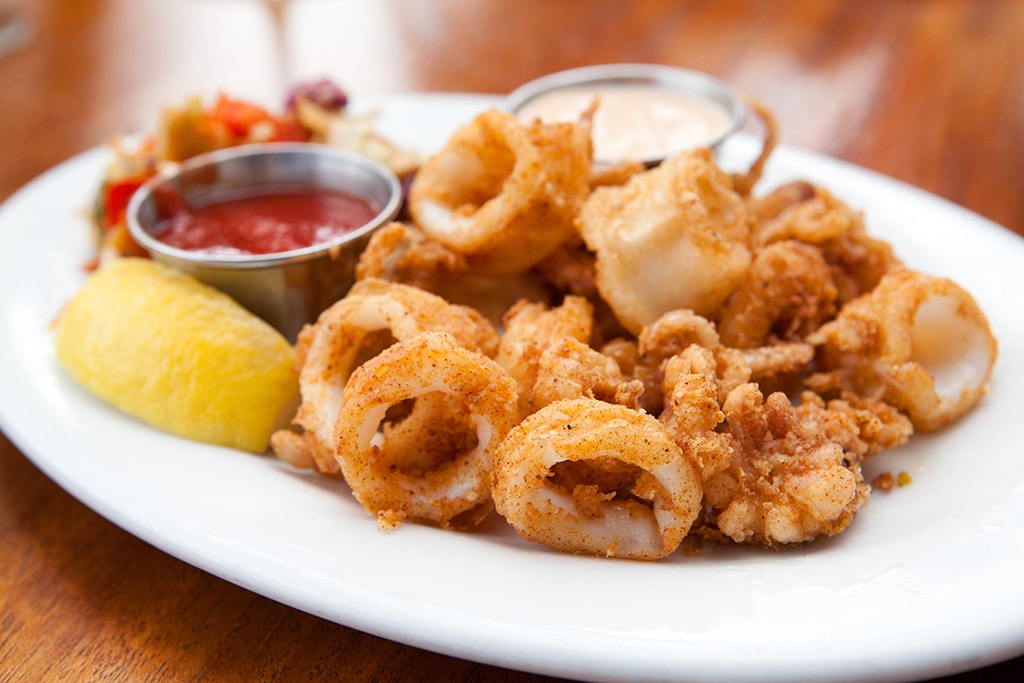 South Florida, known for its tropical climate, abundant seafood, and proximity to the Caribbean, has its own unique culinary style. Unlike other Southern food cooked and fried in oil, Floribbean cuisine is light and fresh. Dishes are built around bountiful local fish, fruit, and vegetables and influenced by waves of immigrants from Asia, the Caribbean, and Latin America.

These transplants brought with them important flavor components that flourish in Florida. Dishes are heavily spiced with ginger, tamarind, curry pastes, coconuts, peppers, and lemongrass. Any spiciness and heat are balanced out with sweetness and tang from mangoes, citrus, plantains, and other fruit. 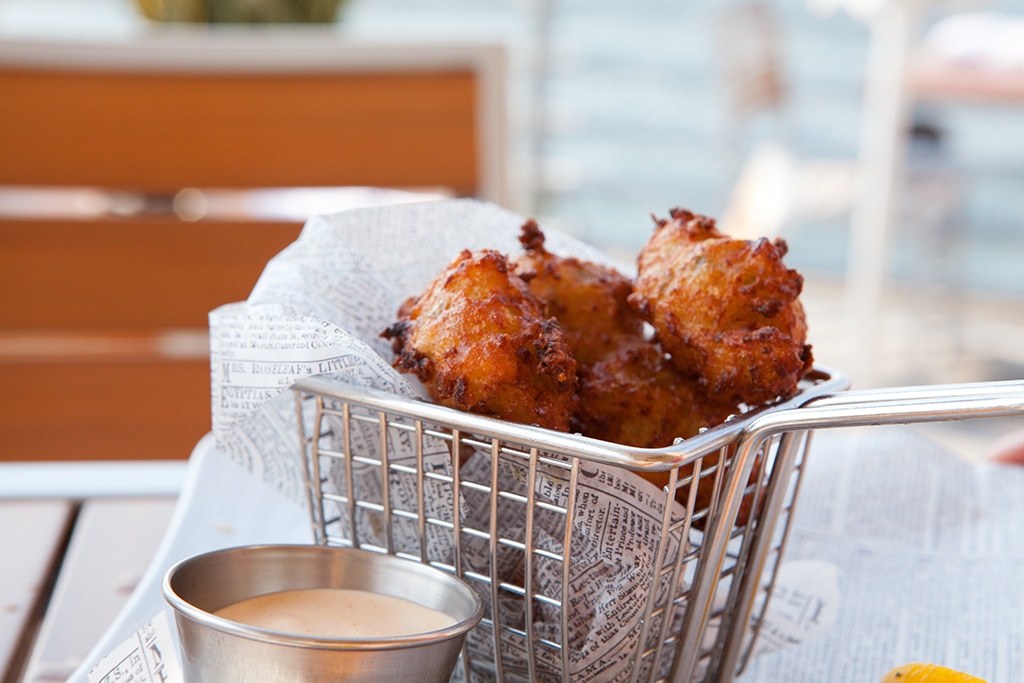 Fish and seafood are plentiful, harvested from the Atlantic’s deep ocean waters, the shallow Caribbean waters of the Keys, and the protected waters of the Gulf of Mexico. Stone crab claws offer a single bite of sweet white meat. Grouper is a light, fleshy fish with tasty cheeks. Seriously, if you see grouper cheeks on a menu, get them in your cheeks.

Pompano, swordfish, flounder, and tuna are caught in the waters surrounding the state. Conch is a sea snail that lives in the Bahamas and the Florida Keys. Its meat can be tough and chewy. Prepared with expert precision, it’ll show off its succulent briny flavor. Look for conch chowder, fritters, ceviche, and salads.

Always follow up your meal with a slice of key lime pie—equal parts sweet, tart, creamy, and cooling.

You won’t find as many barbecue pits (who wants to tend a fire for 20 hours in stifling heat?); however, there are a vast array of smoked fishes. Almost every restaurant has its own version of a smoked fish dip or spread. Each one will be different, each one will claim to be the best.

Much of what we think of as “Southern food” originated along the southern Atlantic coast, also known as the Lowcountry. The marshy coastal estuaries are teeming with oysters, crabs, turtles, and fish. This area is also good for growing rice.

Barrier islands stretching from North Carolina down to Florida became the home to the Gullah people transplanted from West Africa. So many of their native foods grew easily there: okra, watermelon, sweet potatoes, hearty greens, peas, tomatoes, peanuts, and rice. The enslaved people working in the kitchens of the wealthy cooked these same familiar foods which eventually became staples.

She-crab soup is the southern cousin of clam chowder. Frogmore stew isn’t made with frogs—and it’s not even a stew! It’s a Lowcountry boil, a heaping pot of crabby water boiling with corn, sausage, potatoes, and shrimp. 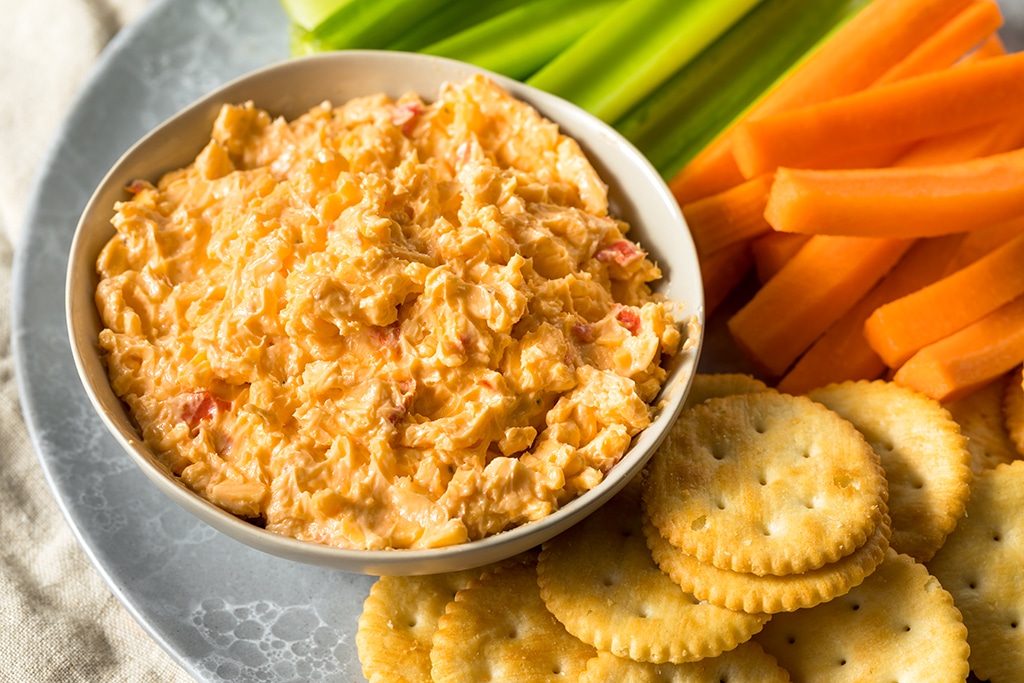 Pimento cheese is a spreadable blend of cheddar, mayo, and jarred peppers. It’s perfect on crackers or melted onto anything from sandwiches to potatoes.

Fried chicken is its own food group in the South. An unseasoned version of the dish arrived with Scottish settlers. The enslaved West African cooks added spices and seasoning. Originally served only on a special occasion, today fried chicken makes every day special. In Maryland, the chicken is marinated in buttermilk. The Tennessee specialty of Nashville Hot Chicken features chicken coated in a thick pepper paste before breading and frying.

Southern food can be anything from coconut grouper ceviche with plantain chips to chili con carne with cornbread. The best way to experience the cuisine is to taste as much as possible in as many restaurants, cafes, gas stations, and roadside stands as possible.