The Future is Now

Over the years, the Miami International Boat Show has been the place to introduce the latest marine engine technology and this year’s show didn’t disappoint.

Consumers can get their hands on the new engines from Ilmor or Indmar this summer, while Mercury plans to release a series of electric outboards starting later this year and into early 2023. 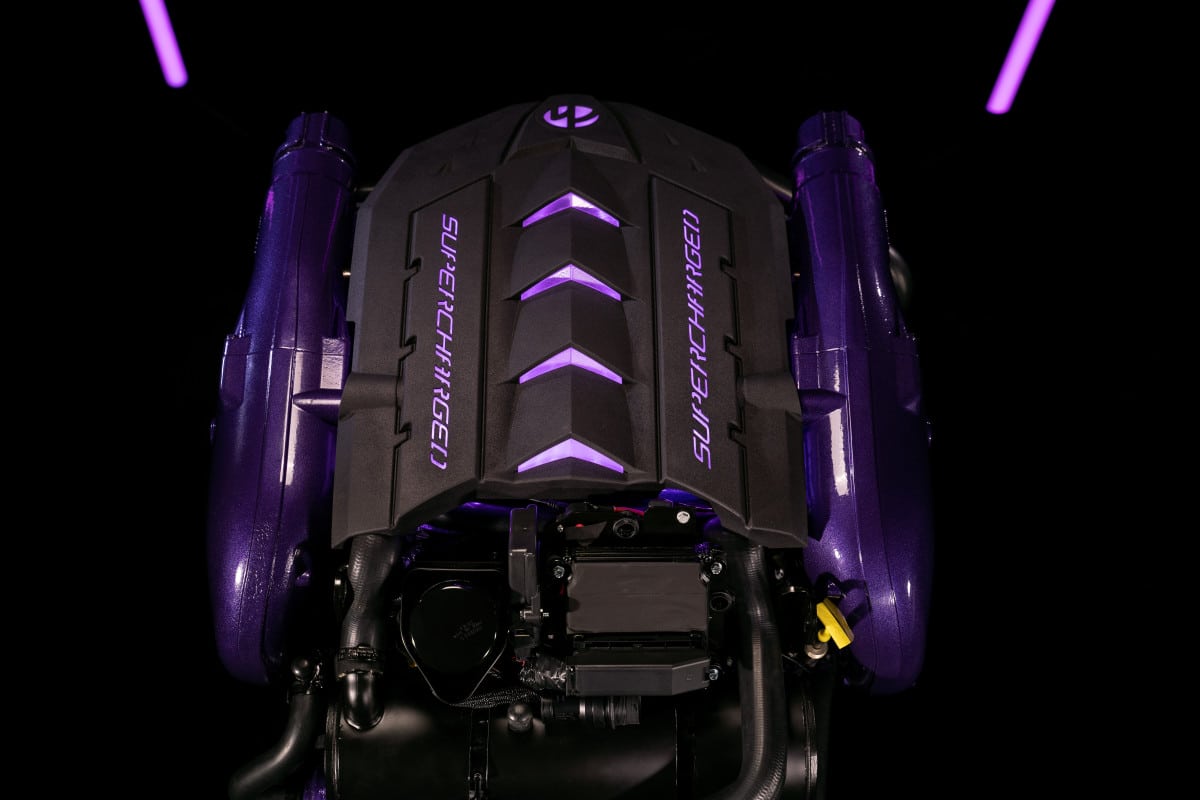 It’s dizzying to think that by this summer MasterCraft Boat Company will have a towboat that can produce 630 horsepower and 665 pound-feet of torque thanks to the all-new Ilmor Supercharged 6.2L engine. The engine ups the horsepower arms race in the towboat industry, where power plants were half the horsepower a few years ago.

“The MasterCraft products have become very feature and content rich, and they have requirements for more ballast, more aggressive wakes, a number of people that they could carry, and the six hundred-plus horsepower was a good marriage of that,” says Mike Lindberg, vice president of Ilmor Marine. “It allows them to have all of those features and, at the same time, it can be running at lower revs but still pulling the same torque figures. It provides a more refined overall experience.”

Engineers supercharged the engine, providing a flat torque curve with a target of 3,000 to 4,000 rpm for surfing and boarding conditions. The greatest challenge was developing an engine package and cooling system to fit within the existing model footprint.

“You have this small package that’s producing a lot of power, so we had to figure out a way to not only cool the engine well so that it won’t derate but also to ensure that
the air temperature, the inlet air temperature, was controlled, and so the charger cooler became critical as part of that,” Lindberg says.

Production will start this spring on the Ilmor Supercharged 6.2L engine, which will have a five-year, 500-hour warranty. The new engine will replace the 7.4L MPI starting in MasterCraft’s 2023 new model year. ilmor.com 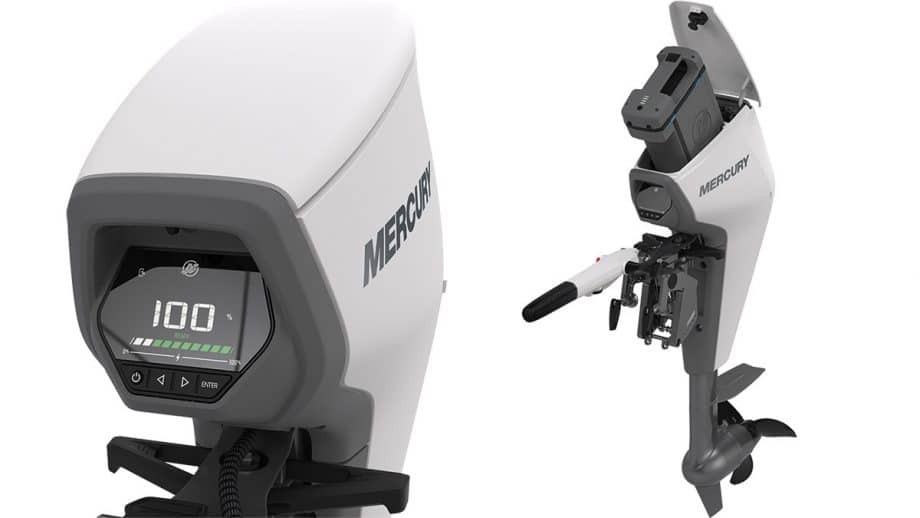 The marine industry has been cautious developing new electric power plants, but Mercury Marine is entering the zero-emission segment in a big way with the debut of the Avator, one of five electric outboards expected from this company.

Mercury Marine released a few details about the Avator line, such as horsepower, range, and charging time. The model that debuted in Miami is a low-horsepower outboard for smaller boats. The unit features quick-changing batteries and an integrated screen to display the battery charge.

“Early adapters of low-horsepower electric outboards have been most concentrated in the sailing market,” says Jim Hergert, senior category manager for Mercury Marine. “Sailors use them as main power on smaller vessels when wind dies down or when maneuvering in tight areas, and others install them on yacht tenders used to travel between a mooring and shore. However, recreational boaters and rental operations are embracing electric as well, using them on aluminum or fiberglass boats for fishing or simply taking a quiet cruise.”

The challenges, like the automotive industry, are waiting for battery advancements such as power density, physical size, weight, and lower costs to accelerate growth of electric power plants. Combustion engines aren’t leaving the Mercury lineup any time soon.

“If you look at other industries, such as automotive or power sports, you’ll note there is still very healthy demand for combustion engines and will be for decades to come,” Hergert says. “There are advantages to each technology we want to leverage, both combustion and electric solutions, giving boaters a choice to select the best product for their application.” mercurymarine.com 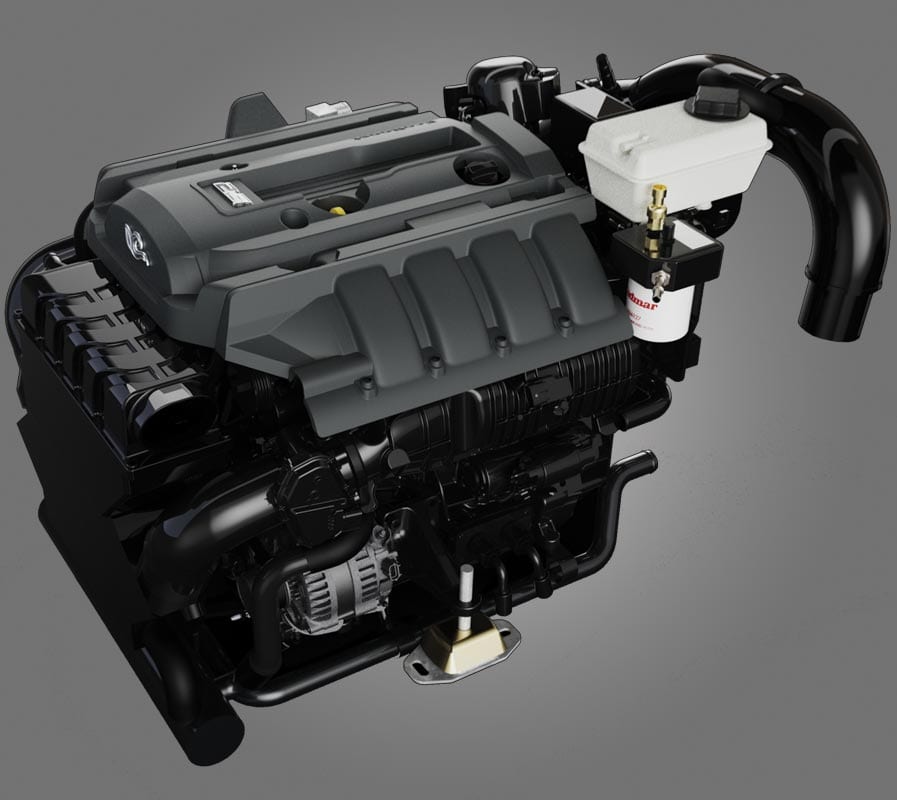 Developed as an alternative to outboards and sterndrives for the pontoon segment, Indmar Marine launched its new 2.3-liter EcoBoost + EcoJet package. Pontoon owners will love the turbocharged inline four-cylinder engine and its 310-hp punch, and builders will love the plug and play installation.

“This is the smartest, most innovated offering Indmar has ever built,” says Jason Stimmel, vice president of engineering. “It’s designed to bring our customers what we believe is the best driving and ownership experience.”

Indmar Marine will deliver builders a completed module, which looks like an outboard flipped on its side, to pontoon builders, who can simply connect the fuel, electrical, and steering connections. The package fits in a 25-inch-deep pontoon.

Stimmel says the benefits of the new package are no propeller on the stern and it can operate in shallow water. The engine has a closed cooling system and there is no raw-water pump for service. The package can produce 350 pound-feet of torque at 4,000 rpm, which provides plenty of power for tow sports.

The technology allows a pontoon boat to pivot on its axis and includes the availability of a heater to extend the boating season in cooler climates.

The engine’s emissions are reportedly four times cleaner than an outboard, Stimmel says. The package comes with a five-year warranty. indmar.com