Brunswick Corporation is the Godfather of smart boating.

Back in 2008, Brunswick Corporation introduced the world’s first fully intuitive joystick piloting system with MerCruiser’s Axius and Zeus systems. It set new standards for power and performance in marine propulsion.

The company knocked down its last bowling pin in 2014 and started expanding its marine business in earnest. The acquisition of Power Products-Global Marine & Mobile in 2018  took Brunswick to the next level, not only to provide more options for the boat owner but also to create technology that can control a boat’s electronic, electrical and power
systems with a touch of a button.

“Systems integration is critical to the boating experience,” says Lee Gordon, Brunswick’s director of marine communications and public relations. “We have four distinct pillars to our Parts and Accessories division strategy—Mercury engines, electrical systems, and integration services with Power Products and all of its brands, Attwood and the more than
four million parts on boats, and our distribution channels with Land ‘N’ Sea, Kellogg and Seachoice, among others. With all of this connectivity, Brunswick is able to offer the boater a range of products and services that others can’t offer.”

Mercury Marine demonstrated the integration technology during their Lake X event and at the Miami International Boat Show on a Harris 250 Grand Mariner pontoon boat. Mercury outboards and Fell Marine’s wireless man overboard (MOB) system were all controlled by Power Products’ CZone Digital Switching system…through a display, a fob or a  smartphone. Automobiles have keyfobs that unlock the car, set up the seats, radio, and heating or air conditioning controls.

The same now happens with your boat. CZone’s wireless keyfob can turn on the batteries, the lights and start up the pumps. The system has mode settings, so before you even
step on board, the boat can fire up the generator, the watermaker, the air conditioning, and the helm instruments so they’re ready to go. No more hopping aboard and spending time turning on the various switches and controls required to leave the dock or tuck it away for the night. Now THAT is smart boating. 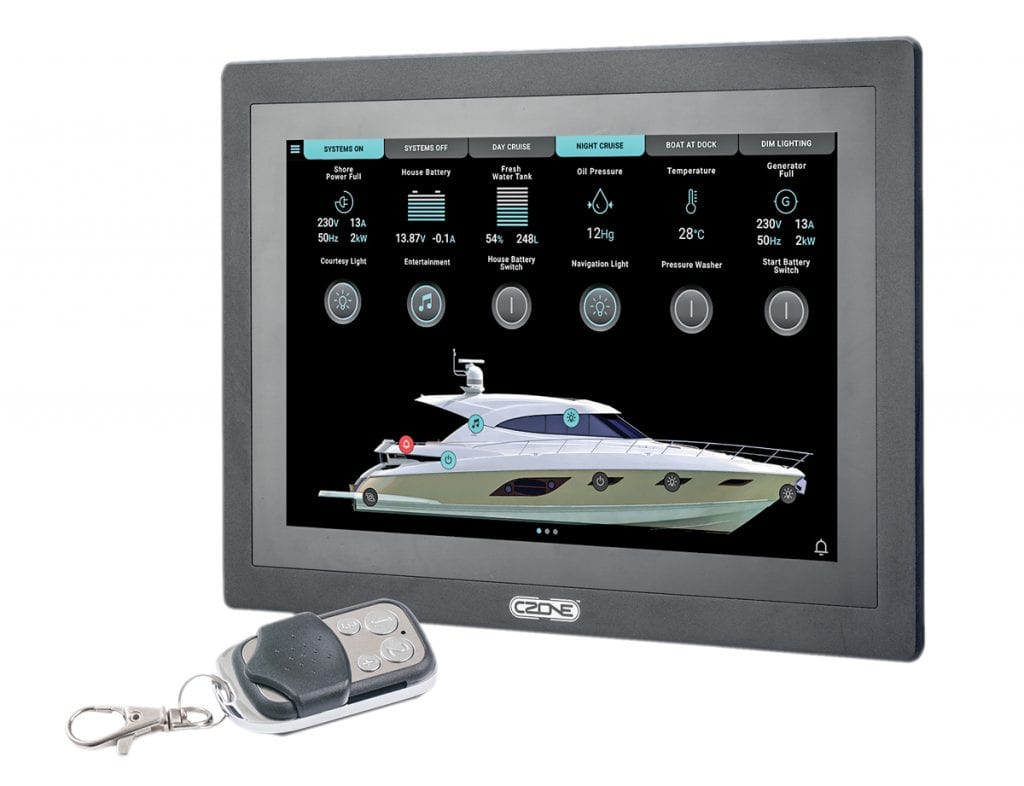 Fell Marine also has a fob that connects to the CZone and Mercury’s Smartcraft network and can clip to a lifejacket or be worn on a wristband or as a necklace. Through a hub that attaches under the dash that connects with the boat’s gauges and instruments via the NMEA 2000 busbar, if a passenger falls overboard and the fob is under water or more than 50 feet from the boat, the engines will immediately stop. This gives time to locate the person. After six seconds, the engines are able to restart in order to retrieve the victim.

“The integration level with Smartcraft allows us to be a little smarter because we now know the state of the engine,” says Daniel Clarkson, general manager of Power Products Integrated Solutions. “We don’t have to trigger an emergency stop or SOS if the boat is sitting still and the engines are not running and not in gear. Based on that data we see on the Smartcraft bus, we can now smartly decide if we want to initiate a MOB.”

The alarm setup on the pontoon was based on the engines and whether they were running and in gear or not in gear. If the engines were running in neutral and someone went back and dropped the swim ladder, an alarm would go off. The system is configurable for any desired setup. In addition, the Fell Marine MOB app can also control the systems, such as turning on the engines, controlling the lights, etc., through CZone, and whatever was adjusted would also appear on the helm display.

Coming to smart world near you

The FELL Marine/CZone integrated technology for smart boating is not yet commercially available, but the demonstration showed proof of concept and the power of integrating different technologies into a common system. “We are in the middle of a development program to offer the next generation MOB device that will be Smartcraft compatible and have features beyond MOB, including up to seven-passenger FOBs,” says Dave Maryanov, Power Products marketing manager. “They’ll also be able to notify an MOB event via AIS, EPIRB, VHF, and cell phone notification, identify the MOB location via dropping a pin on an MFD or cell phone, and have theft deterrent capability requiring passcode or FOB to start
the engine.” The projected release of the system is near the end of 2019.

“Add in Vessel View, Nautic-On and our other partners, and you have the ultimate systems integration, which allows boaters to have the same amenities that they have in their home or their car,” says Gordon. “Our ultimate goal is to elevate the entire experience. Providing innovation and inspiration out on the water will keep boaters engaged and happy, ultimately providing an experience that will make boating easier than ever before.”