The region known as the South Carolina Lowcountry designates a certain geographical area in the southeastern part of the state, but the term also conveys the specific culture, history, and traditions indigenous to the area. Many visitors from other parts of the country, including this former Midwesterner, have preconceived ideas about the South. Mine were limited to notions about “southern hospitality,” foods like grits or collard greens, and Spanish moss hanging from oak trees. With the exception of images of southern plantations, my impressions of the South did not include anything related to luxury.

Soon after arriving at Montage Palmetto Bluff in Bluffton, South Carolina, however, I got a sense of my lack of understanding about almost anything southern. Travel has a tendency to do that for a person. During three days of southern immersion, my initial suspicion grew to a full realization of my inexperience, and when I finally arrived at the inevitable state of acceptance, my former unfamiliarity was replaced with a warm fondness—dare I say “love”—for the Lowcountry.

Six hotel and resort properties comprise the Montage Collection, an ultraluxury hotel and resort management company founded in 2002 that serves affluent travelers and provides the utmost level of service (montagehotels.com). In addition to the newest location, Montage Palmetto Bluff, the five other properties are in Beverly Hills and Laguna Beach, California; Park City, Utah; Kapalua, Hawaii and Los Cabos, Mexico. All of the properties
exude a comfortable elegance, yet each is designed to not only reflect the individuality of its surroundings but to protect it. Palmetto Bluff’s setting along the May River between Hilton Head Island and Savannah encompasses 20,000 acres, more than half of which are committed to the Palmetto Bluff Conservancy as a nature preserve and will never be
developed. Furthermore, an archaeologist is on staff for the purpose of preserving the property’s botanical and historical integrity.

The list of former owners of the land where Palmetto Bluff is situated is lengthy and includes the Wilsons, whose vision was to build a luxury estate that would offer the very best of living at that time. Unfortunately, their 72-room mansion burned to the ground in 1926. In keeping with the previous owners’ dreams, Palmetto Bluff was designed as a charming southern village that offers the best service imaginable. Indeed, RT’s Market, a general store, will order residents’ favorite items so that they’re available for purchase
during their seasonal stays. The village includes a waterside chapel overlooking the May River, an ideal setting for intimate weddings. Single-story, two-to-five bedroom homes line lantern-lit streets, where the preferred mode of transportation is by bicycle. Home ownership with the Montage Branded Residences includes all the amenities of the 200-guest hotel and club, including concierge service and housekeeping and fulfills just about any request you can think of.

Cruisers would do well to make marina and hotel reservations for a long overdue, long weekend of pampering or more active options; there’s no shortage of ways to fill your time here. Wilson Landing on the May River—a certified South Carolina Clean Marina—offers five docks, dry-dock storage for 80 members’ boats, a boat ramp, and a storage yard. Kayaks and stand-up paddleboards are also available for rental. For a real treat, leave your boat at the dock and arrange for a leisurely sunset cruise on May River aboard the beautifully restored, resort-owned, antique yacht GRACE.

Built in 2004, the May River Golf Club is a Jack Nicklaus Signature design. Like the rest of the property, the course has been integrated into the environment to be unobtrusive.
There’s no gaudy signage to muck up the landscape, and old-time wooden rakes are placed at sand traps. The course is so serene and natural that a nesting pair of bald eagles are permanent residents on hole No. 15. The Palmetto Shooting Club is a popular with residents and guests to test their sharp-shooting skill with clay targets, while tennis, bocce and croquet are available at Wilson Lawn and Racquet Club. The Club offers many sitting areas for family and friends so they can be part of the activity sans the skill or sweat. Afterward, satiate your appetite at seven dining options, or retire to your quiet guest room and enjoy private, in-room dining with 24-hour service. Wine director Jesse Rodriguez will even provide wine pairings with your menu selection.

With so many options on property, you’ll be hard-pressed to run out of things to do, but the village of Bluffton and its historic shops on Calhoun Street are worth a look-see. Take
advantage of the town’s bike taxi for a narrated tour, and then get a bite at Farm, a popular eatery for its inventive and ever-changing menu using locally sourced ingredients.

No weekend at Montage Palmetto Bluff would be complete without partaking in at least one of the resort’s traditions. “Porching” in the afternoons is just as it sounds: You sit
on the porch at River House, drink tea or lemonade and enjoy conversation—simple as that, daily at 3:30. Evenings are done right with kids and adults roasting marshmallows
for s’mores from 7 to 9PM. But one of the most popular traditions is enjoyment of Montage Palmetto Bluff’s signature drink, Artillery Punch, which should be imbibed
by adults only. (Beverage manager Ross Hardigan got the recipe from his grandmother.)

No visit to a resort of this caliber is complete without one of the many indigenous treatments or therapies offered in the 13,000-square-foot Spa Montage. Enjoy a Deluxe
Caviar Facial, Lavender Body Treatment or Palmetto Body Bliss Massage for ultra-deep relaxation. No matter what you choose, it’s a perfect way to end a long weekend at
Montage Palmetto Bluff—immersed in luxury and loving the Lowcountry. montagehotels.com/palmettobluff 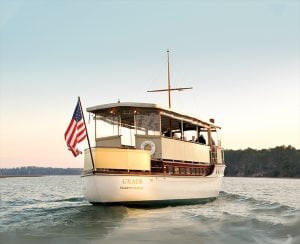 This antique yacht was built in 1913 by the New York Yacht, Launch & Engine Company of Morris Heights, New York, for Joseph B. Cousins. Cousins used it on Long Island Sound and the East and Hudson Rivers with his family. Grace is one of the few remaining gas-powered yachts built before World War I. She was then owned by a number of interesting people, including James Adams, who owned the James Adams Floating Theater. The vessel sunk in 1941 in Thunderbolt, Georgia, but was later recovered and managed well until the late 1970s, when she was abandoned. Palmetto Bluff acquired her in 2004 and named her after the sister of R.T. Wilson, Jr., who purchased Palmetto Bluff in 1902. Grace lived at Palmetto Bluff for a time and married Cornelius “Neely” Vanderbilt III, and she hosted many parties for charity each year in New York and Newport.