For the cruising boat, Spanish Wells sits at the crossroads of the Abacos, Nassau, Exumas, and other Out Islands of The Bahamas. It has a long history of European
settlement, stretching to the 17th century, but seemingly hasn’t changed much in all that time. The name Spanish Wells really refers to the town itself and is usually applied to the general area. It is made up of three closely spaced islands separated only by the narrow harbor. St. George’s Cay is where the primary settlement lies, but it is connected by a low bridge to Russell Island just across from the waterfront, where many homes and fishing boats can be found. At the east end of the harbor, Charles Island is uninhabited but protects the town and harbor from strong south winds and seas. All of this lies just off the northwest tip of Eleuthera and at the north end of the Exumas section of the Great  Bahama Bank.

Fresh well water was discovered here during the period of European exploration, a precious commodity in those times, leading to the name of the settlement. The first European settlers were part of the Eleutheran Adventurers group shipwrecked on the Devil’s Backbone in 1647 who used a cave as shelter. 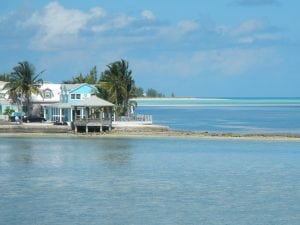 Coming from Bermuda seeking religious freedom, part of  the group ultimately  established themselves on St. George’s Cay. More settlers arrived as Loyalists from the newly independent United States in the late 1700s and sought refuge elsewhere in the British empire, but they were only allowed to come if they gave up their slaves. The result was an isolated, religious, independent community that remained so well into the 20th century. In the 1970s and ’80s, the town emerged from that solitude to become the premier commercial fishing port in The Bahamas, supplying “crawfish” (spiny lobster) to much of The Bahamas. Today, this is one of the wealthier towns in these islands, with well-maintained homes and businesses painted in bright pastel colors.

Spanish Wells is a popular and enjoyable stop for cruisers, with many attractions on land and in the water, a well-protected harbor, marine services, and numerous anchorages nearby among the surrounding islands. The primary entry is between Russell and Charles Islands, a narrow but well-marked and dredged cut with good depths. This entrance is used by freighters, large fishing boats and the fast ferry and is relatively straightforward.

Once through the gateway, turn sharply to port to reach Spanish Wells Yacht Haven, a full-service marina with excellent facilities, or turn to starboard to reach the small mooring field at the east end of the harbor. If you are arriving directly from the U.S. or elsewhere, you can clear customs at this Port of Entry. There is a second entrance to the harbor from the east side between Charles Island and St. George’s. It is also well charted with minimum depths of about six feet but is most often used when heading to or from Harbour Island. Fuel is readily available in the harbor, and great provisioning is right on the waterfront; given that this is a fishing town, seafood can be found easily.

The waters around Spanish Wells and east along Devil’s Backbone are well-known for fantastic SCUBA diving. The reefs have claimed many ships over the centuries, and a number of these wrecks are at accessible depths and still visible, some by snorkeling. About six miles away, Current Cut is often done as a drift dive in strong currents. In addition, locals have created multiple artificial reefs with everything from railroad cars to old automobiles. There are several dive companies in town and on nearby  Harbour Island, and some of the sportfishing operations also offer dive trips. About eight miles away over the banks to the southwest, Egg Island has good surfing in a north swell on the ocean side but behind a sheltering reef.