The latest version of the Palm Beach 52 is born from the love of a stylish profile.

I remember back in my sail racing days on San Francisco Bay how cool it was to see the classic, sleek, powered-up profiles of some sailboats as they headed upwind under full sail and tightly trimmed. The Etchells and Star keelboats come to mind, but so do the J-Class America’s Cup boats I’ve seen in many an epic photograph and painting. There’s just something about that powered-up look.

A similar feeling is true with the traditional Maine lobster boat design, although not looking all that sleek, the vessel has a strong, yet graceful appearance to it. That was the profile that caught the eyes of Australian Mark Richards while he was sail racing off the U.S. Northeast coast.

Richards is a professional yachtsman who has competed around the world. He also has a knack for yacht design; he learned the trade as a young shipwright apprentice and was instrumental in many sailboat designs through collaborations with John McConachy on America’s Cup boats, Bob Oatley and the maxi sailboat designs, and naval architect Andy Dovell.

It was with Dovell that Richards captured that lobster boat style in a design intended to be a “sailor’s powerboat,” the PB38. It was lighter, had a softer ride, and used half the fuel than its lobster boat inspiration. From that first mold, Richards, now CEO of GB Marine Group, parent company of Palm Beach Motor Yachts, improved each Palm Beach model to give owners superior quality, efficiency, maneuverability, and comfort—all encompassed in the latest version of the Palm Beach 52.

It begins in the hull design, where a boat really makes its mark. In their desire to build that sailor’s powerboat, Richards and Dovell created an entirely new hull design.

Starting with the PB38 and refined with each build, the evolution of the V-warp hull developed into a sharpened V-bow entry to slice through the water ahead of a semi-displacement form that flares amidships to roll away the water and then continue to a low deadrise aft. The result is buoyancy, stability, additional lift, reduced drag, and that soft Palm Beach ride.

“One of the things about planing boats…is that you have to get over the ‘hump,’ that transition speed between displacement and planing,” says Hank Compton, managing director for GB Marine Group in Stuart, Florida. “You can’t see anything over the bow as the boat reaches speed, and it’s terrible on fuel economy. We don’t have that. You can physically run this boat from forward detent all the way to wide open throttle and there’s no uncomfortable place.

“We’ve got a very shallow dead rise aft, say about eight degrees, which gives you a lot of lift because you have a big, flat section aft,” he adds. “In addition to that, you get a lot more stability because the design utilizes the entire bottom. …The V-warp hull is like a planing hull, but not. It’s more of a displacement hull, but because we have such a fine entry, all that lift aft, and because we’re light, the boat moves smoothly from hull speed to plane speed. …It’s one reason why our ride is so comfortable.”

Another reason the ride is so comfortable is the boat is built with all the bulkheads and fixed furniture fused to the hull. That makes for a solid, level platform. “Like all of our boats, it’s infused with e-glass,” says Compton. “And the deck up through the hardtop is infused carbon fiber, which really keeps the weight down and the center of gravity low.”

In addition to the hull and upper structure designed to keep the center of gravity low, the Palm Beach 52’s standard twin 600-hp Volvo Penta IPS 800s are installed in the center of the boat, which, by design, helps balance the boat.

“The other thing we did that a lot of people do not do, especially with pods, is we keep the engine locations in the same spot whether you get pods or shafts, and we offer both,” says Compton. “But we don’t move the engines. We feel like the engine location in the center of the boat as low as you can get is by far the best location. And then we have a carbon fiber jackshaft on the back of the engine that runs back to the input of the pod. …I think people really like the performance of the pods, and I can confirm that we’re getting roughly twenty-five to thirty percent better fuel efficiency with the pods versus the shafts.”

The 800s will take her up to 32 knots, but as Compton mentioned, there’s the option for shaft drives with twin Volvo D11 engines. Owners also have the choice of twin Volvo Penta IPS 950s that will reach speeds up to 34 knots. 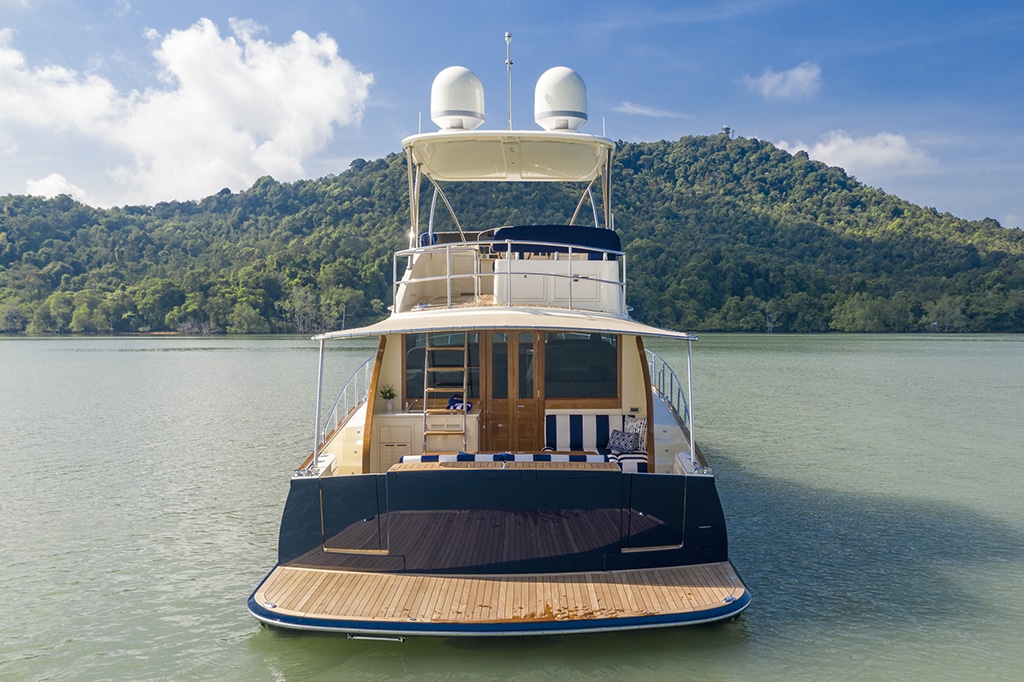 The aft deck has a traditional Palm Beach layout with an aft-facing L-shaped settee against the cabin sole to starboard and a countertop with sink atop a fridge to port. A forward-facing transom settee with room for three at a teak table makes for a nice entertainment area. Owners have the option to configure the aft deck, including the awning, which can setup as fixed or removable.

“The upside to the fixed one is you get the downlights,” says Compton. “You can run thirty to forty knots, and it’ll stay secure.”

The fixed swim platform is accessible from both sides of the aft deck and the transom has a wide counter-like top that can serve as a counter, but it flips up to reveal a barbecue and storage area. “A lot of people put fenders and lines in this storage box because it drains into the main deck drain,” says Compton. “Some people insulate this and make it a cooler box.”

The height of the transom from the ample swim platform is another key element: It serves as a riser for the outboard engine on the tender. That’s right, there’s a tender garage behind that transom and under the aft deck that fits an 11-foot tender with a 20-hp tiller outboard. 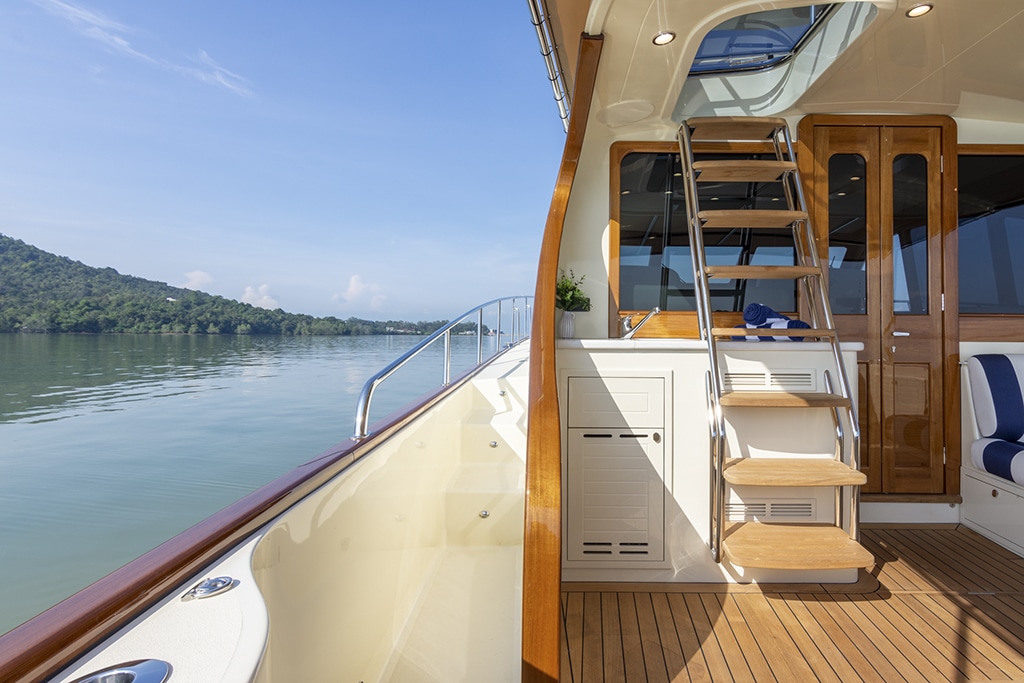 Looking forward from the aft deck is a walkway on each side of the cabin to provide easy access to the anchor and the large sunpad on the bow. 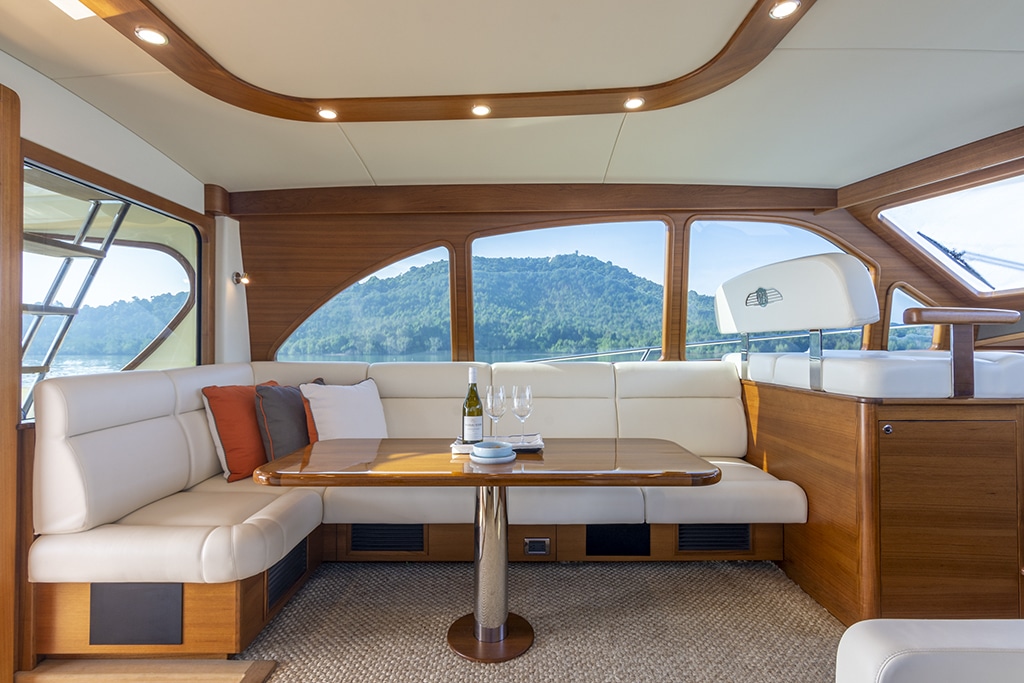 Inside the cabin, the layout is nothing short of stylish. Classic teak woodwork surrounds cushioned seats that have living room coziness, especially with the starboard twin facing settee option. To port, a long L-shape settee with a teak table seats four.

The elevated helm is forward to starboard with a matching forward-facing helm seat to port. Between the two, steps lead down to the accommodations, and in this model, the galley, which has a cathedral-type feeling because it’s open to the top of the cabin headliner. There is an option for a galley up, but you’d lose the port helm seat, and with the ceiling-less galley down, it’s easy to still be part of the conversation, yet allow for some out-of-the-way space.

“We’re probably fifty/fifty up galley versus down galley, but my personal opinion is that the down galley works quite well with this boat because it’s still open,” says Compton. “It’s not like you’re stuck in the hole.” 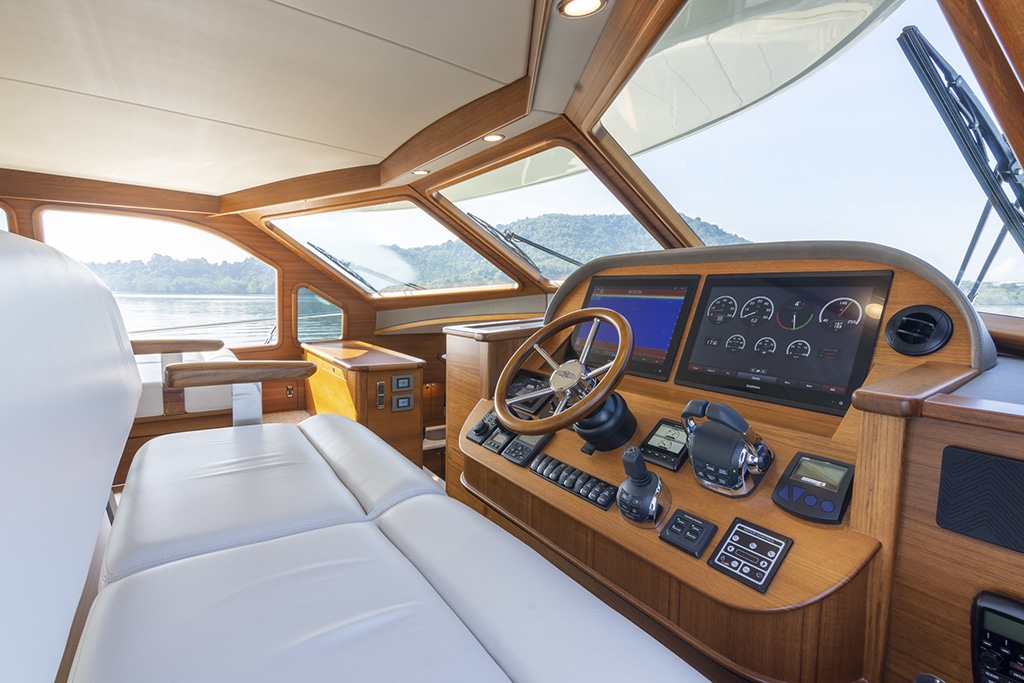 On this boat, the cabinets, the trim, the panels, the doors, the flooring (even in the heads), and the helm all have that rich, golden, soft, warm teak that is strong and durable. Matched with white headliners, counters, and seat cushions, the look embodies sophistication. Owners can customize colors, fabrics, fixtures, fittings, and upholstery when building their boat.

The ensuite master cabin forward features a raised centerline queen berth, while the beds in the ensuite twin cabin midship to starboard can slide together to make another queen. There’s plenty of storage everywhere, including under the companionway floorboards.

The Palm Beach 52 has two models, sedan and flybridge. “These owners have done one thing a little bit differently with the flybridge on this boat,” says Compton. “They have gone for a double Stidd seat (standard is two separate seats) and got the joystick control in the armrest. They also made this hardtop about three feet longer than standard.” What that did was extend the deck living area all the way aft. Normally, the aft section is open and has a small entertainment center/wet bar. Now with the enclosure, the entire flybridge is a sitting area, and the owners added air conditioning for more comfort.

“I think this model is a good combination of modern design, modern building, and the classic look,” says Compton. “It’s the most fun boat you can drive, I guarantee it. It really is like driving a sports car that looks like a Rolls (Royce), and that’s the beauty of it—you can have the best of both worlds.”

Anchoring in the Bahamas