The Vicem 65 IPS Classic shows its strength in style.

The sound of stepping aboard the Vicem 65 IPS Classic is, well, solid, if that can describe a sound. There’s no fiberglass bounce, no echo through the deck and definitely not much movement from the boat.

It could have something to do with Turkey’s traditional boatbuilding method based on handmade, mahogany wood construction through a cold-molded process (up to 16 layers of laminated mahogany, it’s told, that is stronger than fiberglass on a strength-to-weight ratio) using West System epoxy and modern-day high-tech glass and carbon fibers that reinforce the stress points and encapsulate the inner and outer layers of the hull. The wood may be heavy, but the boat is a beast.

“I was on plane at 22 knots in a 55 Vicem in the ICW just after a hurricane, and I hit a log,” says Capt. Ahmed Alvarez. “The only thing that happened to the boat is that the bottom paint separated from the boat—no delamination and no structural damage.” That’s pretty solid…and strong.

Once on board, there’s a feeling of height and plenty of space. The yacht does appear tall off the waterline, but there’s a reason—headroom. The yacht’s downeast style keeps the
profile low, but she is a big boat and when you go below, the interior volume is enormous. This model was originally built for an NBA basketball player, so as an example, the master suite’s headroom is seven feet, five inches, and that’s the way it is throughout.

The accommodations are available in a three or four stateroom configuration. In either layout, the full-beam master suite is amidships with a walkaround bed, ensuite head and
separate shower, plenty of storage, large window, 40-inch flat screen TV, and, like the rest of the interior, dressed with mahogany, including the cabinets and drawers. The VIP cabin is forward with a centerline, walkaround bed against the bulkhead, ensuite head and shower in the bow, 40-inch flat screen TV, and windows on each side above a small settee. Between the master and VIP suites on either side of the passageway are smaller cabins; the port is a single, captain’s quarters, and the starboard has two single bunks.

Each cabin has a 24-inch TV, and they share a separate head with a shower that is also the dayhead and has a separate door for a passageway entrance and one that connects to the starboard cabin. There’s also a laundry room that has access to the bilge. Throughout the accommodation deck, the hull’s construction provides a quiet sleep, and the mahogany finish makes the quarters warm and comfortable with an air of sophistication.

The mahogany carries up to the main deck where the wood helps keep down the sun’s glare yet provides a warm glow with the evening lights. The well-designed helm is to starboard and has a double adjustable helm seat as well as a helm door to the side deck. A suite of Garmin electronics match two Garmin Glass Cockpit displays and are joined by Volvo Penta throttle and joystick controls as well as bow thruster and trim tab controls. The controls sit on a panel made of a veneer-dipped aluminum to keep with the quality of the build, and the varnish on the wood is almost two-millimeters thick—more than U.S. standards—and as with belowdecks, all the wood is mahogany, even in the cabinets and drawers. 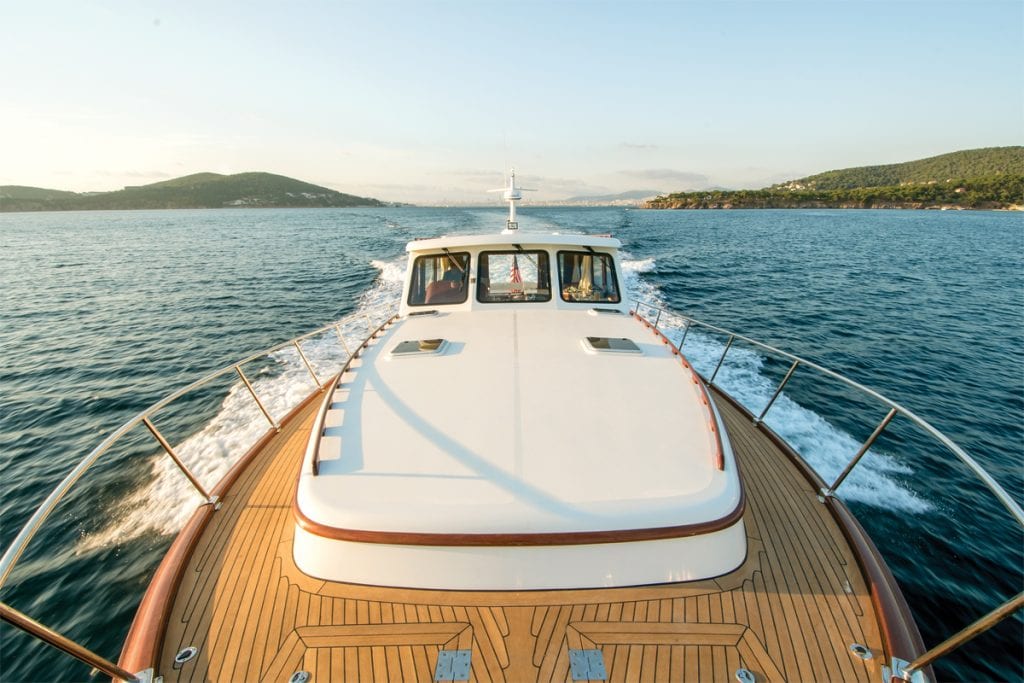 The galley-up layout on the main deck makes it easier for those that want to be part of the action and not stuck down below. There are flexible Corian counters it’s more flexible and doesn’t crack, and there’s plenty of space as it wraps from facing forward, along the port side and back facing aft, making everything within reach. Equipment includes a SubZero refrigerator and freezer along with electric ceramic stovetop with downdraft ventilation and convection/ microwave oven.

The salon includes an L-shaped sofa behind the helm with a coffee table that hides two stools and is across from the entertainment center on the port side that includes a hidden
55-inch TV. The entire main deck area is surrounded by large windows to give anyone inside a 360-degree view. Open the double mahogany and glass sliding doors to expand
the living and entertaining area to the aft deck. It really makes for the perfect boating lifestyle. The seating area stretches along the entire port side and wraps around along the transom to offer plenty of room for relaxation, not to mention all the storage space in the lockers under the cushions.

An entertainment center to starboard opens to reveal a grill and sink, and a varnished teak table sits six comfortably. A transom door on the starboard side leads to the  hydraulic swim platform that includes a stainless steel swim ladder and a hot and cold shower.

The cockpit’s teak flooring has flush hatches that lead to the standing headroom engine compartment. Twin 800-hp Volvo Penta diesels with IPS 1050 pod drives provide propulsion. They seem small compared to some of the shaft drive engines but have plenty of power to cruise at 22 knots. Because of their size, the engines are mounted further back to allow more space forward for a 15 kW generator. Space for an optional Seakeeper and the fuel and water tanks, all positioned to balance the boat. Vicem offers two other Volvo Penta engine options: an IPS 1200 or IPS 1350.

This is Vicem’s 12th yacht in the 60-foot market and the first in that size range fitted with the Volvo Penta IPS system. The cold-molded construction process along with the IPS drives gave Vicem the opportunity to build a 65-foot yacht with the internal volume of a 80-foot express cruiser. Vicem has achieved this while keeping the classic downeast lines.

“This boat is perfect because it’s customizable,” says Sinan Unal. He’s a naval architect and marine engineer. He adds that a boat this size rarely has so many design features including plenty of room and a hydraulic swim platform. She also draws attention to key safety features that make the Vicem 65 IPS Classic feel really stable and secure. “You feel like you are in a Rolls Royce, and it’s easily controlled without the steering wheel.”

The trip out into the Atlantic showed the yacht’s stability, gliding right through waves and providing a gentle ride. The engines were quiet and there was no problem having a
conversation in the salon while at speed. Capt. Alvarez delivered the yacht from Beaufort, North Carolina to St. Augustine, Florida at 22 knots in almost a straight shot. “I left at five in the evening and arrived around six the next morning in horrible, following seas,” he says.

“I had no problems. The boat felt really strong without a stabilizer or fins. With the IPS system, turning the wheel was smooth because everything is connected electronically instead of hydraulically, and I still had 23 percent of fuel remaining when I arrived.”