As the new model series’ name implies, the Formula 430 All Sport Crossover is dedicated to doing it all.

Expert anglers know what turns a boat from good to great, and it’s more than just adding rod holders. When designing the Formula 430 All Sport Crossover (ASC), the company sought advice from fishing captains who land dolphin, tuna and wahoo. “We consulted with the best in the business, so we didn’t go off the rails in design,” explains Danny Porter, research and development manager at Formula Boats. “We sought out the features that dedicated anglers would want from the low, mid and high ranges. Then we chose the best. There are fourteen rod-holders on the boat, and four are at the livewell. That comes standard. Then for trolling, you can add electric outriggers to the hardtop.”

During a Facebook Live session at the 2017 Fort Lauderdale International Boat Show, Formula designer John Adams took viewers on a tour of the Formula 430 All Sport Crossover and the thinking behind her construction. “This obviously appears to be a fishing machine, but she’s much more than that. Along with the Seakeeper 6, you are very comfortable. Also, the boat has a second control system,” Adams explains, referring to two popular options: the gyro stabilizer and a Mercury Joystick at the fishing station. “This is a detail you see on much larger sportfishing boats, and you can control the boat beautifully.”

The Formula 430 All Sport Crossover has a huge swim platform aft, covered with comfortable PlasDECK synthetic teak boat decking. The deck is separated from the outboard engines with a padded sports station bar. The bar holds rod holders and cup holders. “It’s a big deck good for not only fishing but also as staging for swimming, diving, and snorkeling,” says Porter. “Also, there are racks for standup paddleboards and dive-ladder drop-offs on either side, port, and starboard. There is a zone for watersports, and it’s big enough for quite a few people.” 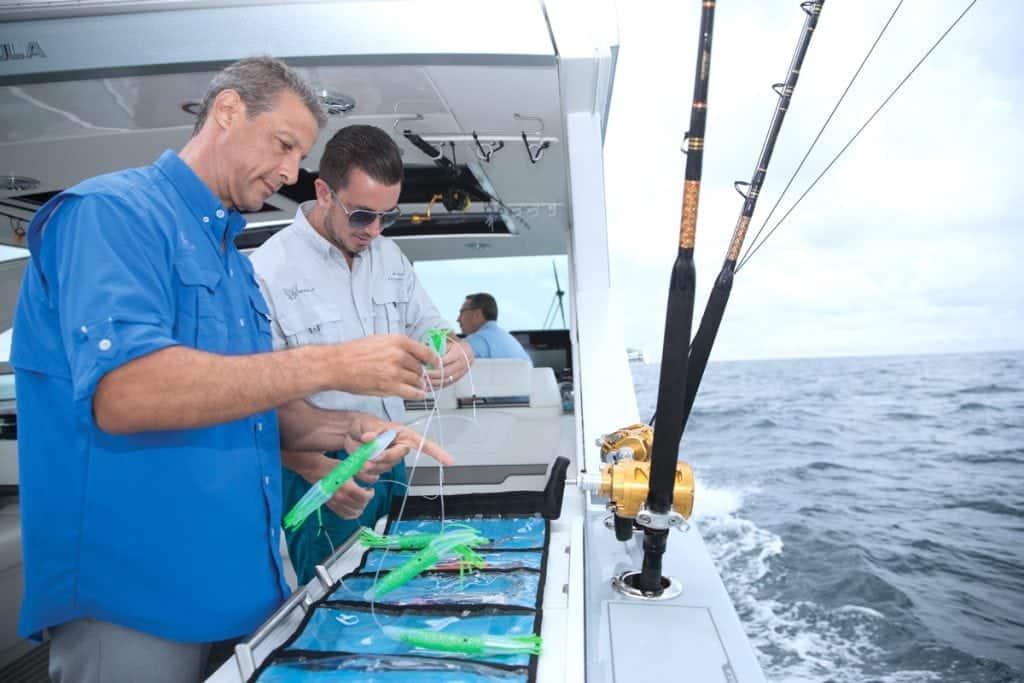 Fishing amenities continue with a 52-gallon, pressurized livewell that can double as dive tank storage. The livewell is part of a larger fishing station that has storage, tackle drawers, bait prep, fresh and raw water hookups, and the location for the second helm station. Four rod-holders (reduced to three rod-holders with the Mercury Joystick Piloting control option) across the back of the fishing station combine with 10-rod holders built into the sport station bar.

“We use digital switching, which has really grown in the last few years,” says Porter. “The digital switching allows you to run all your breakers, lighting, entertainment, and other features and control it from a display or an iPad. It gives you more mobility.” A sturdy hardtop covers this entire space and features a motorized glass sunroof.

“People want the power, and while it can be equipped with quad 300-horsepower or triples, you just don’t see much of that.” At the dash, the Mercury VesselView information system displays engine information, generator performance, sonar, and more. Engine data like rpm, speed, fuel flow and efficiency, temperature and trim can be monitored for all four engines at once on an LCD screen. You’ll do so in comfort.

“Ergonomically, these seats are great. You can raise or lower the footrests to lock in for big water,” Porter explains. “You’ve got the Joystick Piloting for Outboards from Mercury, and the throttles and shifters are easy to reach along with the steering wheel. The boat has Bennett trim tabs and, of course, you have the Skyhook Digital anchorless feature from Mercury to keep you on a spot.”

Moving forward into the expansive bow area through the port-side walkway from the helm, a semicircle-shaped lounge goes around the gunwales. Two table pedestals can raise and lower—up for the dining position, down to make the entire area into a huge sunpad. Dual coolers, storage lockers under the seat, and a canopy round out the space.

“There are going to be times you need to get out of the sun. When being under the canopy won’t do, you can go down below into the cabin,” says Porter, who shows off the port entrance at the helm. “The Formula 430 All Sport Crossover has a separate air conditioning system at the helm and in the cabin. So you can keep it cool and comfortable depending on where the party is located.”

“The Formula 430 All Sport Crossover offers something for everyone, not just anglers or divers,” says Porter. “The design is smart, too. I really like the aft control station with the Mercury Joystick. This helps with maneuvering around other boats, at the dock and, of course, while fishing. It’s something not a lot of other builders are doing. It makes a lot of sense on the water.” But when it comes down to it, you’d be hard-pressed to find someone that the 430 ASC doesn’t suit.

Where to Eat in Freeport, NY