Sōlace Boats and Volvo Penta team up to create a new platform for fun.

When I saw the new SOLACE 415CS center console for the first time, I immediately noticed two things: no outboards and the massive size of the aft deck…and swim platform! It’s true. I’m so used to seeing center consoles with outboards and a transom that encloses the cockpit, but this was totally different—almost like the deck just extended out into the water, which it did.

You might think that’s not very safe when underway, but SŌLACE boats are designed with a meticulous attention to detail. There’s a large centerline sunpad with an adjustable backrest and a swing-away door on each side that closes tightly against the sunpad’s frame to create a transom when running. When open, the doors fit neatly out of the way alongside the gunwale, and the aft deck becomes one huge entertainment area, and good for fishing, too. 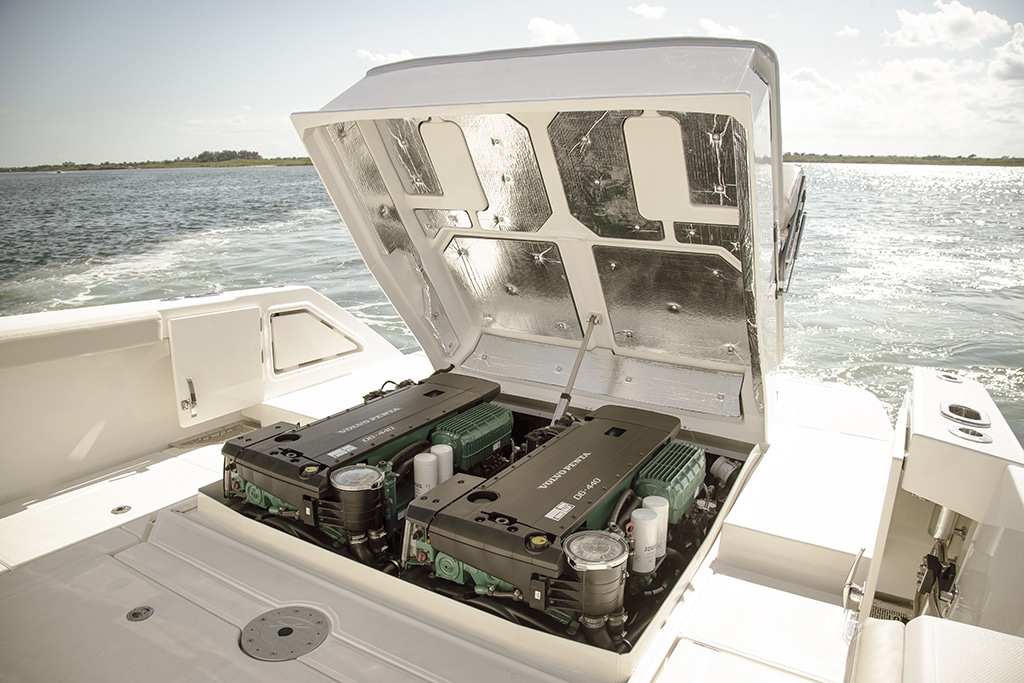 Where are the Engines?

Besides offering a place to sit and catch a few rays on the Solace 415CS, that huge aft sunpad is also the cover for Volvo Penta’s innovative Aquamatic Sterndrive D6-DPI diesel engines. This model has twin 440-hp engines, one of the most powerful drives for the recreational market, but it’s not just the powerplant, it’s the entire package.

The propulsion system, including the controls, is designed as a comprehensive solution from the props to the multifunction displays (MFD) to optimize speed, acceleration, torque, maneuverability, fuel efficiency, and comfort in use. The Aquamatic sterndrive went through extensive updates, including a smooth, silent hydraulic clutch that, when matched with Volvo Penta’s trademark counter-rotation DuoProp propellers, results in greater maneuverability at low speeds. The sterndrive has improved reliability for longer service intervals as well as additional sensors for monitoring and diagnostics.

On top of that, “Our fuel consumption is dramatically reduced,” says Jens Bering, vice president of marine sales for Volvo Penta of the Americas. “Compared to outboards in the same boat, we have a fifty percent increase in range, and that’s no small number.” Fuel consumption is reduced by up to 42 percent at cruising speeds over comparable outboard configurations. 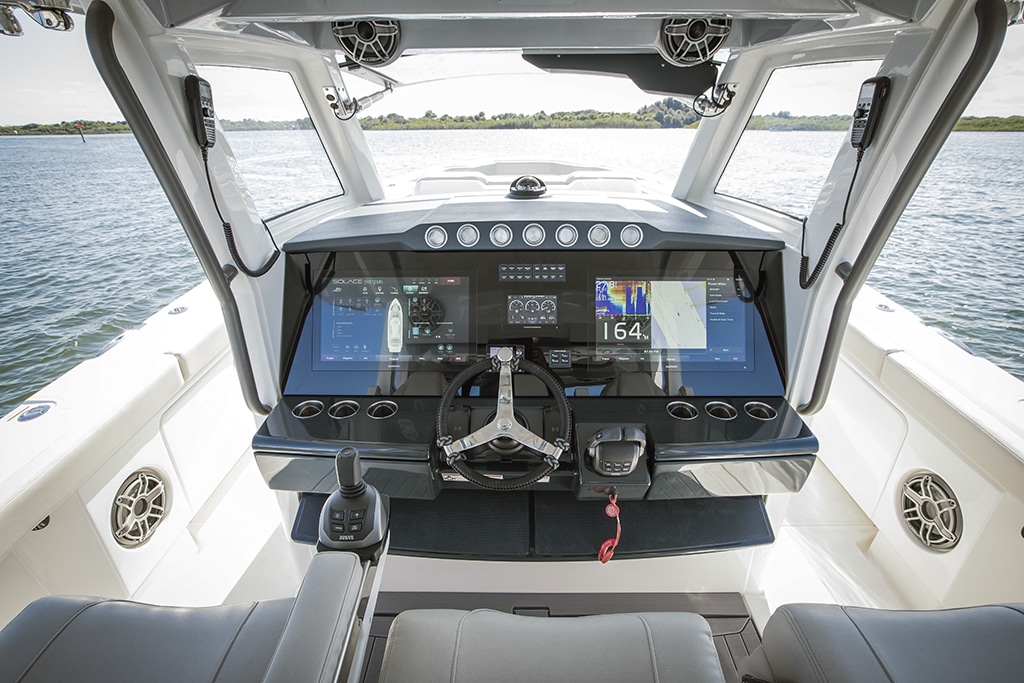 At the helm, the Electronic Vessel Control System connects and manages the internal communications between the propulsion system and the throttle, joystick, dynamic positioning, and glass cockpit controls for simpler operation, even informing operators with diagnostics through the On-Board Maintenance Assistant. It’s all part of Volvo Penta’s Easy Boating philosophy, which shows off cleverly in the placement of the joystick and the Garmin GRID 20 remote device. They’re both integrated into the helm chair armrests. Like having the television remote control within reach, you don’t have to get up out of the seat to control the boat’s direction or access the Garmin MFD menu to configure screen displays. 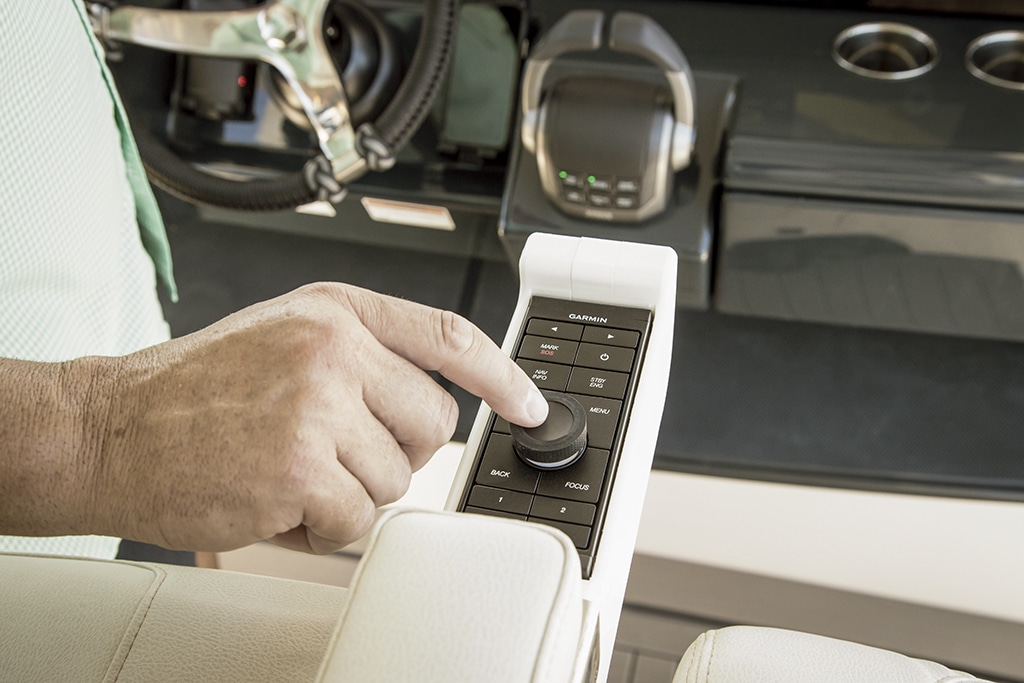 The technology at the helm and in the engines is awesome, at least for those of us interested the “operation of things,” and so is the way the boat rides. “It didn’t matter how we had the boat loaded with all the gear and all the people and everything else, it just seemed to be a little bit more consistent in how it ran or how it was floating,” says Albrecht. “With that said, with the weight further forward and not hanging on the transom, the boat just feels a lot more solid as it comes back into the water after a wave. When it comes back down, the boat has a much better feel and in big water,
it feels like a bigger boat.”

If the family and your fishing buddies appreciate the ride, they’ll certainly enjoy the reduced noise when underway. “What stood out most to me was how quiet these engines run,” says Albrecht. “I give a lot of credit to the in-house design team on how they made not only the engine box, but also how they routed the intake air so that we didn’t have a lot of sound escaping.” Volvo did its part on the engines, and Soundown added the right noise reduction solution. “Whether it’s cruising down the Intracoastal or cruising forty miles an hour, it is truly the quietest experience I’ve ever had, inboard or outboard.” 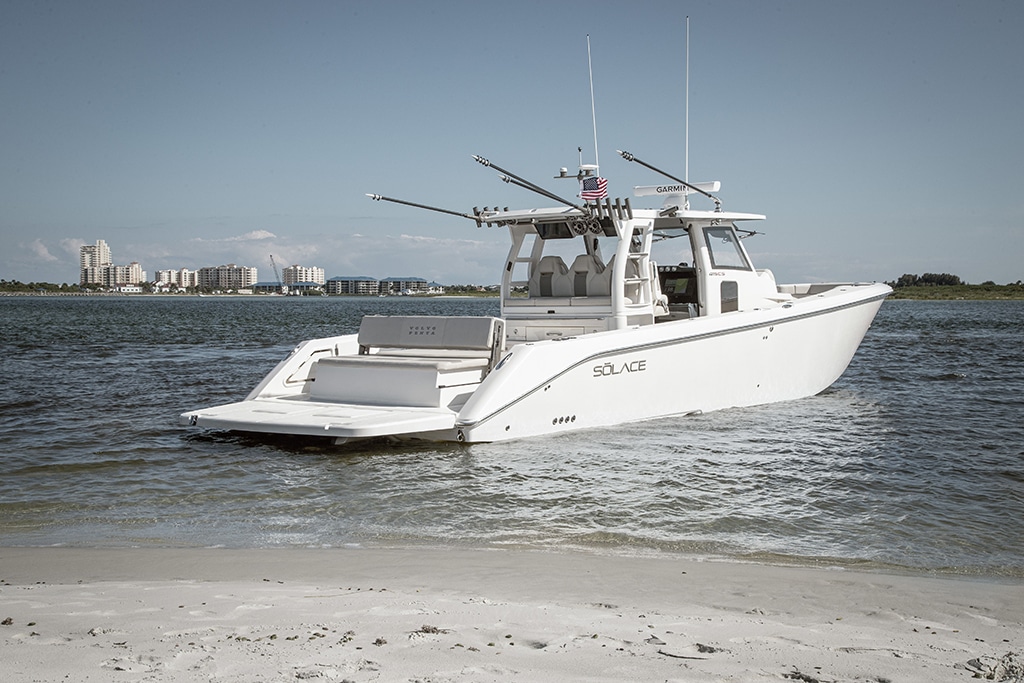 As if talking about the technology isn’t fun, we all know a center console is a versatile platform for fun in the sun with its shallow draft and its ability to fish one day and take the family to the sandbar the next. The Solace 415CS is a day boat that is highly maneuverable with plenty of storage, and some have small cabins for a bathroom break or for the kids to nap. With the fuel efficiency of the Volvo Penta sterndrive inboards, a trip to the Bahamas and back from Florida isn’t a stretch. “It’s how we sized the fuel tanks on this project,” says Bering. “It was all about going to the Bahamas, have fun in the Bahamas, and come back again on one tank of fuel.”

The boat incorporates a wealth of family and fishing features, including a carbon-fiber superstructure, one-piece dive door with integrated stairs, fully opening electric windshield, and the versatile aft seating arrangements on deck. Built-in air conditioning and a cabin with enclosed shower and head are just part of what makes the 415CS an innovative family boat that has the flexibility for any waterborne activity. 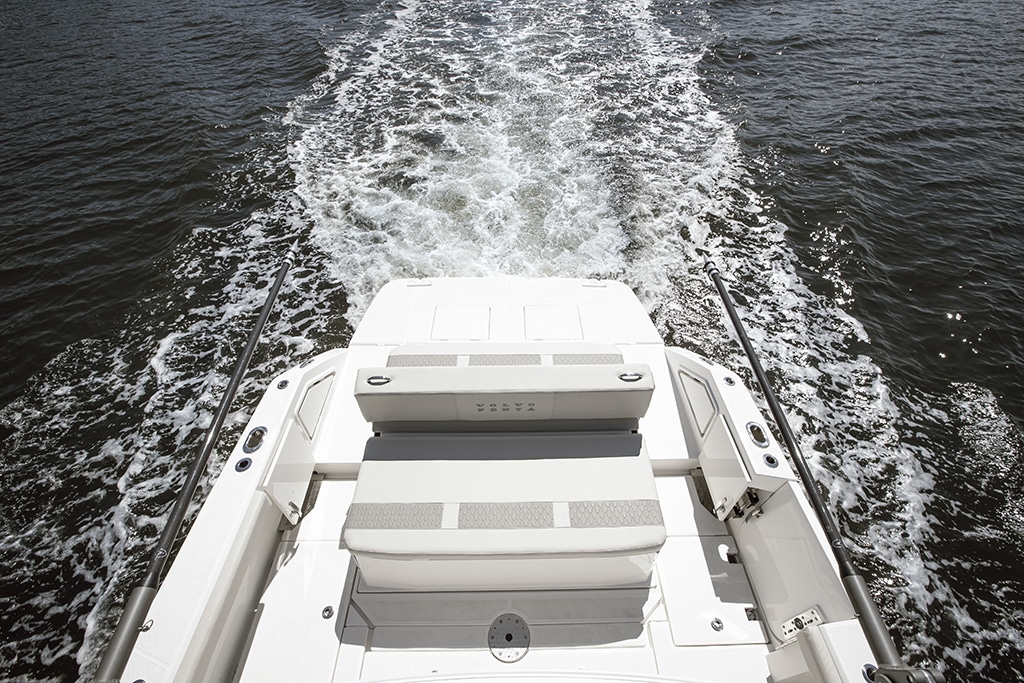 There was concern that because of the large sunpad in the middle of the cockpit, fishing would be cumbersome. Well, it’s a center console, so you can walk completely around the boat from the stern to the bow and back, and with a fish on, that’s important. Yes, there is a hullside “tuna” door to port, but there’s also that huge swim platform. What a spot to bring on a catch! There are no engines to nab your line or obstruct landing the fish. Outriggers and rocket launchers are mounted on the hardtop, and rod holders line the gunwale from stern to bow. There’s mezzanine seating behind the helm that faces the action, and underneath is a huge tackle/storage cabinet. Fish boxes set within the deck, and recessed seating atop coolers in the bow are removable when tournament fishing to allow room to lean against the rail.

Looking to buy a SŌLACE? Check out our brokerage section.

Family fun is accentuated by the seating as well. Besides the recessed forward seating in the bow, a centerline sun lounge ahead of the console seats three and is made with memory foam. Lift up the mezzanine seating overlooking the cockpit to find a food prep center with sink and faucet, and grill. The cockpit sunpad provides a huge area to hang out, and the incredibly large swim platform is a launch pad for everything water sports. Speaking of which, the swim platform keeps the sterndrives under wraps from swimmers, and the ability for the drives to tilt up allows the boat shallow access to the beach or sandbar.

“We wanted to solve some commonly seen missed opportunities within the center console market,” says Albrecht, stating the importance of “increased versatility with the transom, extended range, less fueling time at the dock, quieter cruise, improved maneuverability, and more.” This is a fun, comfortable boat with the technology and open space to get the most out of day on the water. solaceboats.com volvopenta.com