Pursuit’s Sport Series center consoles have all the amenities for a day on the water.

Center consoles are known for their maneuverability and fishing prowess, but they’ve become much more in recent years. The Pursuit Sport Series is a perfect example of how center consoles have evolved into comfortable, versatile platforms for any adventure.

Newest in Pursuit’s popular Sport Series is the S 358, its first 35-foot center console, that nicely balances the series with the S 428, Pursuit’s largest and flagship model on one end, and the modest, yet robust S 268 on the other. The range shares a lot of similarities, but each has its own personality. 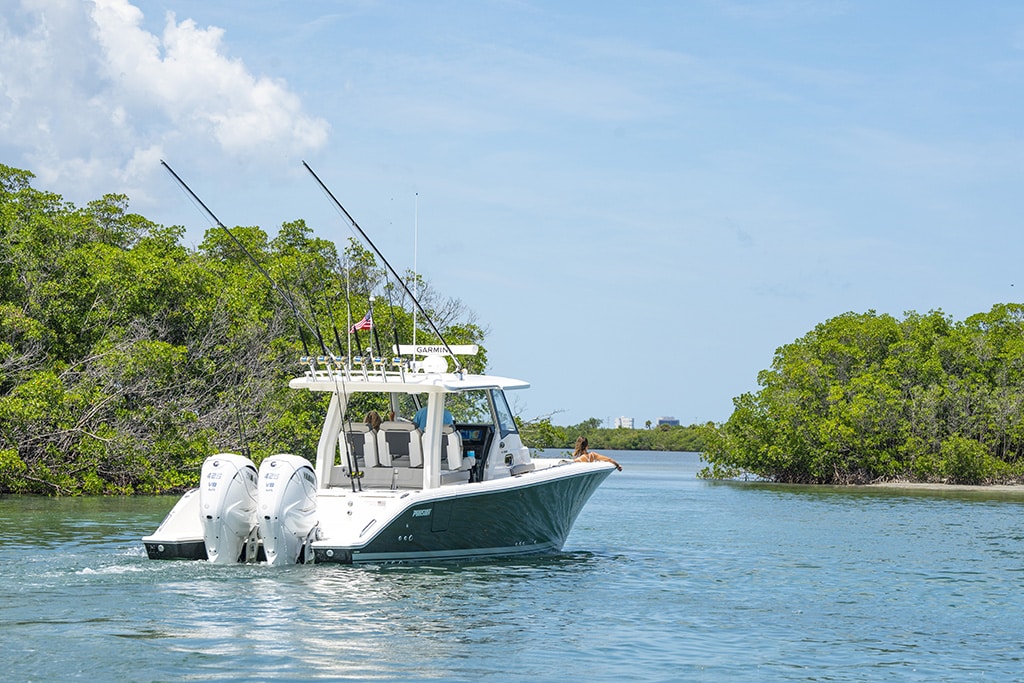 The S 358, like her bigger sisters, the S 428 and the S 378, boasts a wide-open cockpit with plenty of room to bait and catch and haul in some big fish. Anglers will find 12 rod holders standard around the gunwale fore and aft, and with the optional hardtop rocket launcher and Taco Grand Slam 390 extending outriggers, the fish will feel they’re at a smorgasbord. A 32-gallon recirculating lighted livewell with Oceana blue finish and a clear lid contains lots of bait, and the in-floor insulated fish boxes with diaphragm pump-outs port and starboard hold your catch. Tackle drawers are nearby in the portside helm seat base. 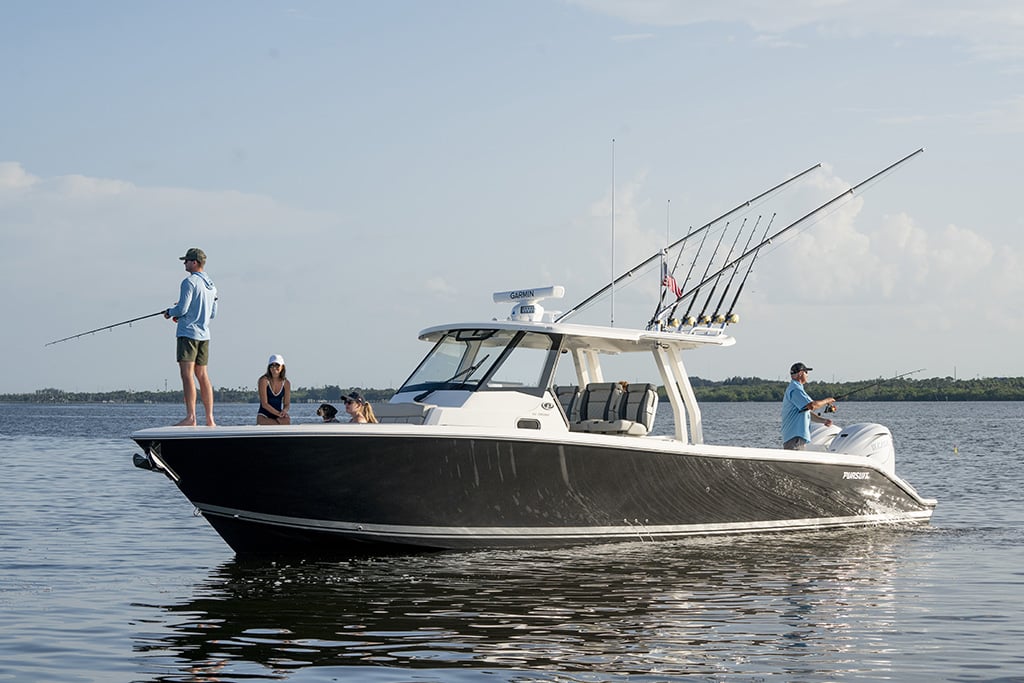 A big fishing advantage of a center console is that anglers can move around the entire boat to keep working the catch. Wide walkways on either side of the helm have coaming and rails along the gunwale for safety, and built-in coaming boxes forward keep fenders and dock lines secure while under the gunwales aft, holders keep rods and long gaffs safely stowed.

The same features carry on in the S 378 and S 428, but with the additional length of the 42, there are three fish boxes, two in the floor and a 68-gallon insulated transom box with a 36-gallon recirculating livewell on each side. On all three models, the patented foldaway transom seat opens the cockpit for unobstructed fishing off the stern. Fresh and raw water washdowns are located hull side at the transom to starboard with a hot/cold shower to port next to the transom door. Speaking of which, the door opens to access the engines from a wraparound platform and includes a flush-mount pullout ladder for swimmers. 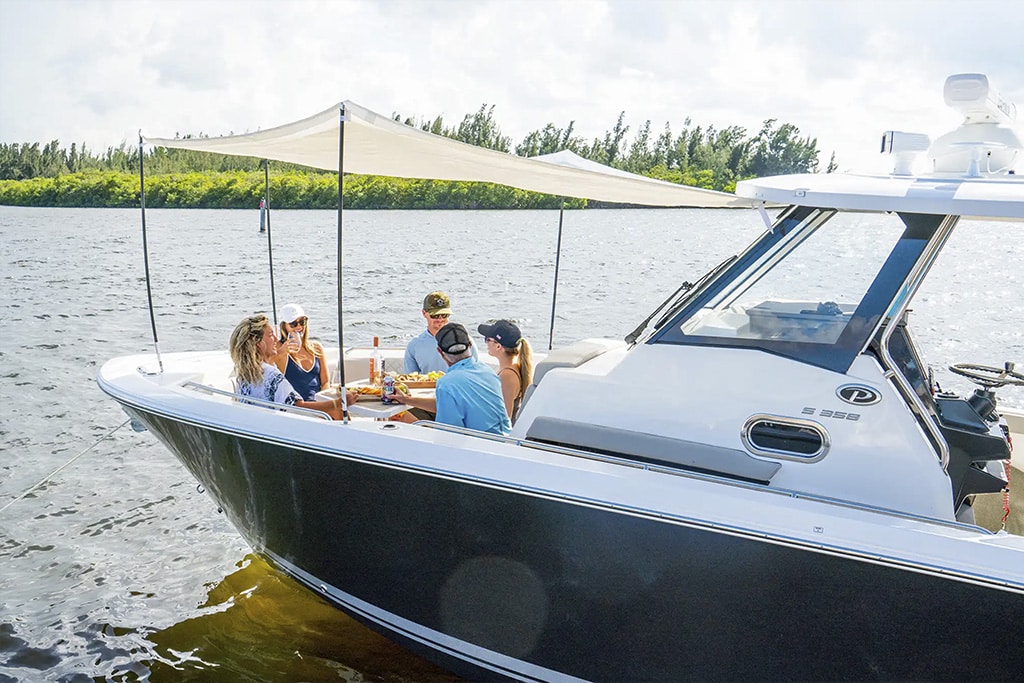 With the catch boxed up and the washdown complete as well as one or two fillets ready to grill, the cockpit easily transforms into an entertainment area with a few simple moves. Chances are the mezzanine aft-facing seating and the transom seat were folded away to clear the cockpit for fishing, but when folded out, six can sit comfortably around a removable pedestal table. The entertainment center supports the mezzanine seating aft of the helm seats and includes a grill, insulated storage box, sink, and cutting board. Pursuit is all about function and versatility, and it shows in the S 358’s mezzanine seating. The starboard side folds up to keep working the grill while the portside seating can remain down for guests. The refrigerator is conveniently located underneath the grill with the door opening out in the starboard walkway.

A really cool feature on the S 378 and S 428 is that the mezzanine seating is motorized and slides into the cockpit space with the push of a button. On the 378, the entertainment center moves with the seating and on the 428, the seating moves away from the entertainment center, both creating a separate, walk-through galley area behind the helm. Another special feature on the 428 that creates even more entertainment space is when the starboard cockpit hull side opens outward to form a beach deck. Yep, with the push of a button.

Comfortable seating and hanging out with family and friends aren’t confined to the cockpit. There’s a huge bow on the other end with wraparound and lounge seating to stretch out and relax. Electrically activated backrests on the port and starboard sides of the wraparound seating create a forward-facing lounge while the centerline console seating reclines and has armrests. Dine alfresco or play games on the custom fiberglass table that electrically raises and lowers…yep, with the push of a button. A filler cushion atop the table makes for a large sunpad, and an optional Mediterranean-style sunshade helps keep the sun at bay if necessary. The bow has its own audio controls and plenty of drink holders as well as storage under the seats. 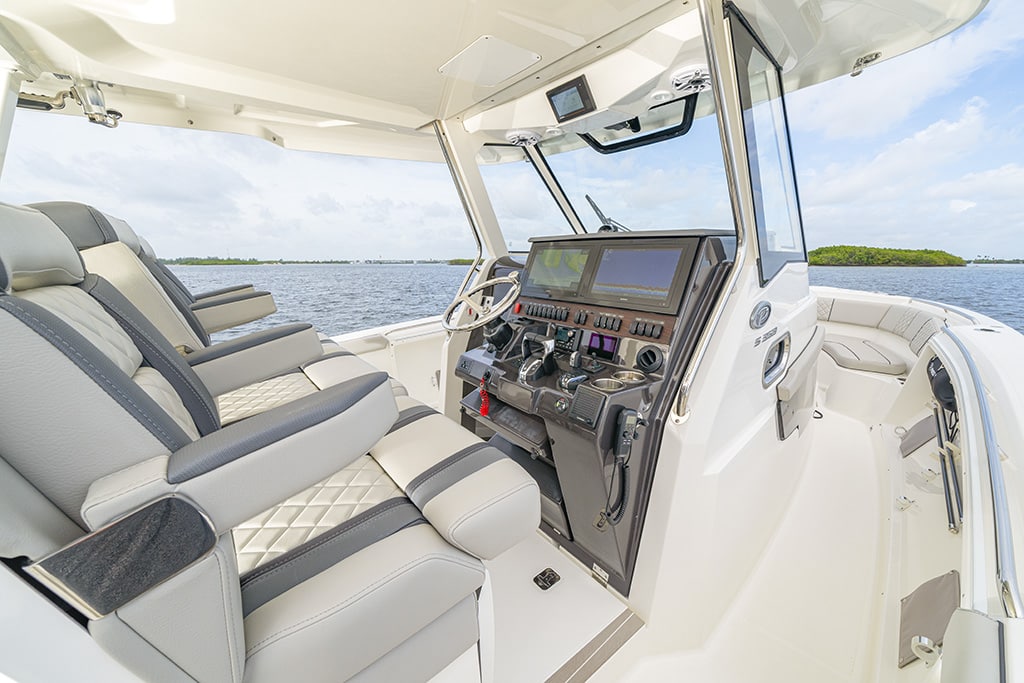 The fishing, the entertaining, and the adventures are all guided from the center console. Helm controls are ergonomically designed within reach for fluid operation. The dash accommodates dual 16-inch displays, but the optional, factory-installed Garmin electronics package interfaces with the twin Yamaha Digital 425 XTO engine package, including integrated digital electric steering, Helm Master EX, and joystick controls for seamless connection. Similarly, the packages are also available with the triple engines on the 378 and the quadruple setup on the 428 with room for 22-inch displays on its dash. The three models have some great options, too, including SiriusXM satellite and weather, Garmin radar, and FLIR night vision cameras. Compass, trim tab control, and bow thruster joystick controls are standard.

The seating is just as comfortable at the helm as it is at the bow and in the cockpit due to the adjustable triple helm seats that each have individual armrests, bolsters, footrests, and air conditioning vents. The molded fiberglass, full-beam hardtop connects with a custom windshield system with tempered glass, an electrically actuated center vent, and windshield wiper with freshwater washer. It not only protects from weather but provides a solid base for electronics and outriggers on top. The sliding hatch supplies ventilation as well as access to the gear above. When the sun gets a little intense on the aft deck, an optional retractable sunshade mounted in the hardtop provides plenty of cover with, you guessed it, a push of a button. 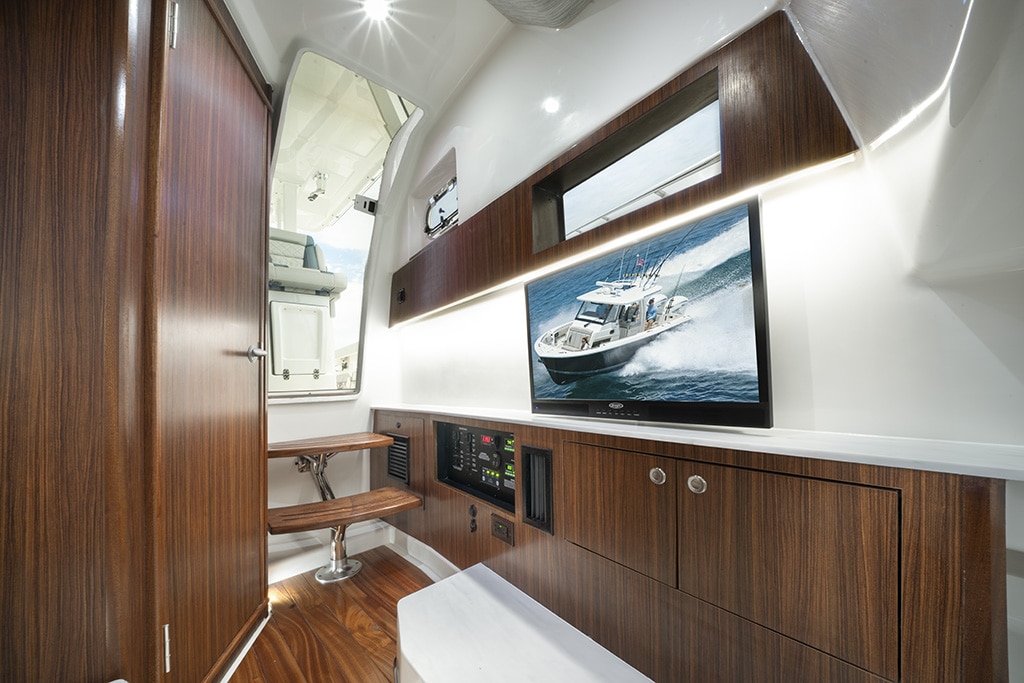 One of the most beneficial features of the Pursuit S 358, and probably the most appreciated, is the well-appointed cabin with a private head. Not too many 35-foot center consoles can boast this feature with macerator head, opening portlight with screen, and Corian countertop with sink and pullout faucet/shower wand for hot or cold water use. There’s ample headroom, and the port and starboard hull windows provide plenty of light, including in the head. The forward seating area converts into a berth, and a 28-inch LED TV along with the optional microwave are quite convenient. This area is also where the main distribution panel is located, accessible yet out of the way.

Innovations abound in Pursuit’s Sport family, and the new S 358 is the balance point of the series. Intuition, imagination, flexibility, craftsmanship, and listening to ideas has made the Sport Series a favorite for all those looking for a boat that adapts to any adventure on the water.