Aquila steps into the realm of the semi-custom with the debut of a luxurious 70-footer.

Catamarans are having a moment. The double-hulled approach has been steadily winning over cruisers weary of the roll for years now; meanwhile, the pandemic has inspired more people to take to the seas in a safe bubble of family and friends. There are arguably few better ways to do this than on the expansive platform a catamaran hull offers.

Enter the new Aquila 70, which makes the very best of first impressions. “When you step on board the boat, you feel like you could actually live on board the boat, or spend extended periods of time on board; it feels like home,” says Alain Raas, Aquila brand manager for MarineMax, the exclusive worldwide distributor of the yachts. 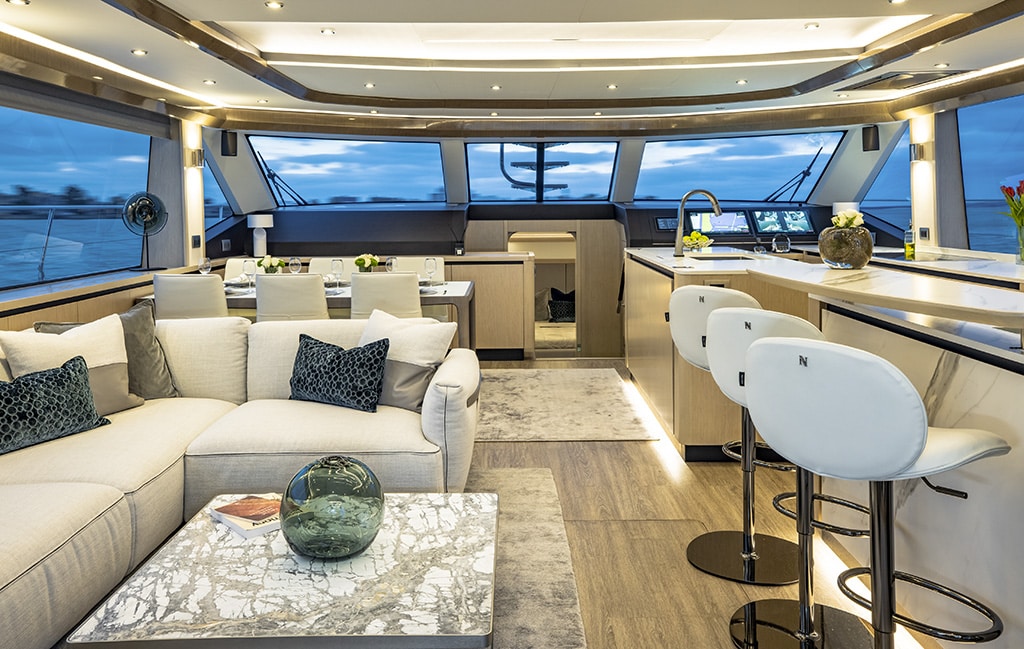 What greets those passing through the sliding glass cockpit doors is villa-like living with a sumptuous sectional sofa and armchair by Natuzzi Italia, a formal dining area, bamboo silk rugs underfoot, and a chic sit-down bar facing the open plan galley. In fact, the only nautical consolation is a sleek and discreet helm station tucked into the starboard corner that practically blends with the stylish galley just behind it.

The bi-level master stateroom forward brings an even bigger wow factor. Spanning the full 27-foot beam, the vast bedroom area with king berth stretches between the hulls while its ensuite and dressing area dip into them. 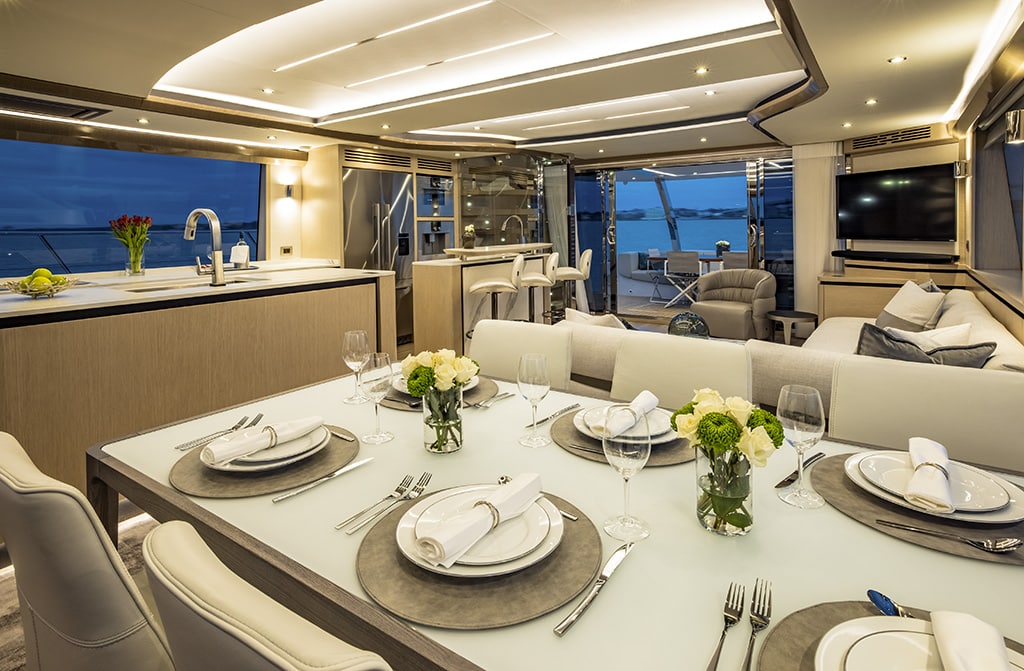 This is the first hull of the new flagship model, which made its debut at the Palm Beach boat show last March and was recently sold. It has served as the showpiece for the brand and prompted orders for three more hulls, each customized for its owner. This marks a major shift for Aquila, which until now has only produced production boats from 28 to 54 feet.

“We sell the 70 all over the world. It’s a different type of clientele,” Raas says. “They have different specifics that they’re looking for, whether it’s a family owner-operated boat or if they’ve got a captain and crew on board, or just a captain full time, or if they’re looking to put it into a charter fleet. There are a lot of different options that can be selected on the 70, whether you want galley up, galley down, three, four, five, or six staterooms.”

The configuration of Hull No. 1 certainly appeals to the American market. It seems tailor-made for cruising the Bahamas with its flybridge open to the temperate elements and a congenial layout where owners and crew can co-exist. All guests are treated like VIPs, accommodated in two generous cabins—one in each hull—with queen berths that face the large windows. The starboard hull aft also houses something any experienced boater will appreciate: a utility room with pantry, laundry facilities, workspace, and dayhead. If an owner desired an extra guest cabin or galley below, this is where it would go. Aft in the port hull, the crew quarters with bunks, ensuite, and a petite navigation desk, are accessed via a separate entrance from the cockpit. The level of finish makes it also suitable for guests. 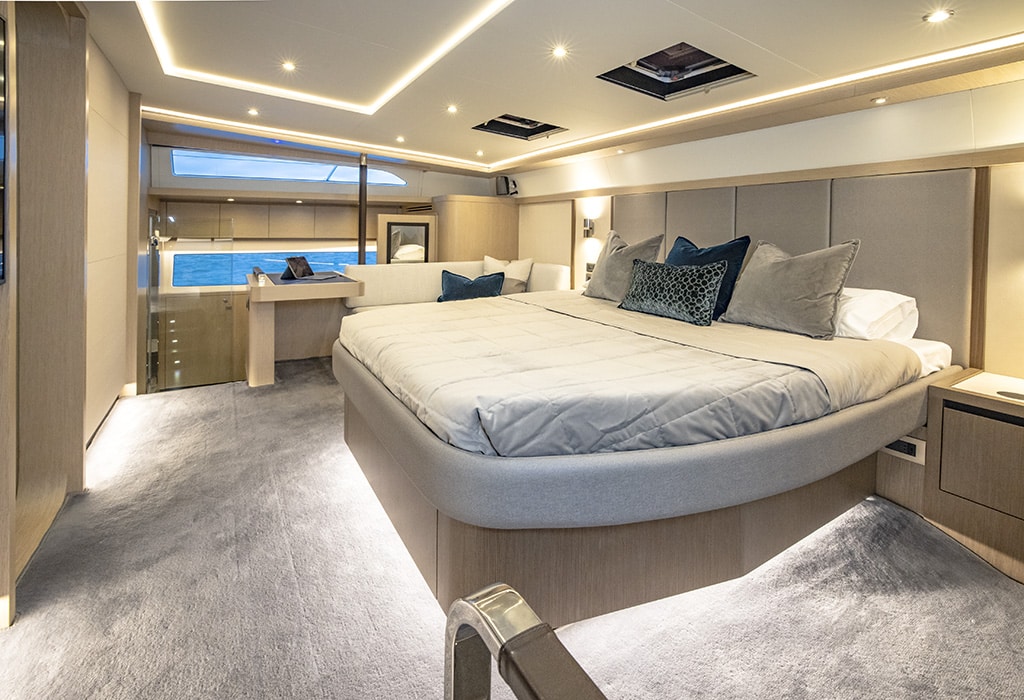 While these eminently livable accommodations hog the spotlight, interestingly, they are not the yacht’s best quality. “We wanted to focus on speed and efficiency, which is really one of the hallmarks of the Aquila 70,” says Raas. Thanks to a careful choice of interior materials that keep her weight down and a tank-tested catamaran design, she tops out at close to 29 knots. At a 24-knot cruise, the catamaran burns 77 gallons per hour, a stark savings over an equivalent length monohull, which can run twice that. Pare it down to 11-and-a-half knots and you’re looking at sipping about 30 gallons per hour—and that’s total, between both 1,000-horsepower Volvo Penta D13 engines.

Aquila is relatively new on the boat scene. Formed in a partnership between MarineMax and Sino Eagle Group, an advanced composites specialist in Hangzhou, China, Aquila Power Catamarans only entered the market nine years ago, but has quickly developed a reputation for quality builds. “[The 70] has carbon fiber bulkheads so everything is carbon resin infused in terms of the bulkhead, and the hull of the boat is vinylester resin infused, a step above polyester resin infusion,” says Raas. “It’s a harder product to work with but for longevity and durability, the boat is going to perform and stand up much longer than some of our counterparts just because of the quality of the resins that are being done.”

She’s also quiet. The engine rooms (one in each hull) are under the cockpit, accessed from a watertight door aft in each hull, so the machinery’s rumble doesn’t resonate to the salon. Guests inside won’t hear or feel close to anything underway. In fact, Charlie Helgeson, a broker with MarineMax, says that’s the selling point when he gets prospective clients off the dock and on the water. “It’s one thing to just hear a sales professional talk about how great the boat performs, but when you get this boat out there, what’s most impressive is how quiet it is,” he says.

The engine rooms can also be accessed via gas-hinged hatches in the deck, allowing for maintenance work without anyone tramping through the interior. It’s one of many examples of thoughtful design. Helgeson points out more: the easily accessible AC breaker panel in the utility room overhead and even the way the televisions in the guest cabin overheads don’t stop at 90 degrees when they swing down, instead reclining to 100 degrees for the best viewing angle from the berth. 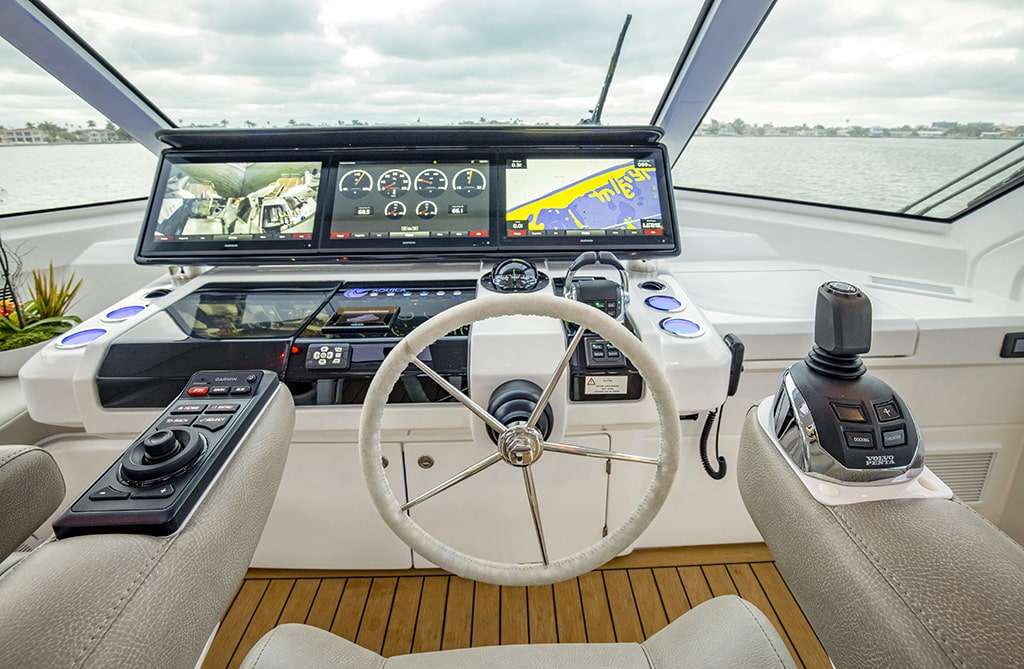 The brains of the boat, as Raas describes it, is the C-Zone system. From a touchscreen on the interior or flybridge helm, the user can intuitively control everything from lighting, electronics, and cameras to pumps, generators, and black water valves. It can also be linked wirelessly with an iPad or iPhone for full control of the systems from anywhere on board.

The user-friendliness extends to the tender stowage aft. A remote-controlled platform fitted between the hulls lowers on an incline to deploy or recover a custom 14-foot catamaran dinghy. “It’s a one-person operation. You don’t have to mess with cranes,” Raas says.

It’s hard to believe, given the 70- by 27-foot dimensions, but parking the big boat is another easy operation, thanks to wing systems with Volvo joysticks that integrate the hydraulic bow thruster, props, and rudders.

As I spoke with Raas, Hull No. 3 was in build for a client and he anticipated the fourth sold hull to get underway shortly, as soon as the engineering work was done for its unique layout. It shows the lengths the team is willing to go to customize each 70, which is the first in Aquila’s “Luxury” division and a sign of the good things to come from the brand.

“Our production boats are great, but for me, it’s the 70. She’s definitely a step up for Aquila heading in the direction where we want to be headed,” says Raas. “Overall, she’s a great boat.”