Marketgauge
4 weeks ago
by Brandon Ferris
0

This past Wednesday began like any other Federal Reserve announcement day.  The markets were on edge.  The week leading up to the Fed meeting was met with continuous speculation that the Fed might pivot.  Even the White House was endorsing the possibility.

At 2:15 EST, Federal Reserve Chairman Powell stepped to the microphone to announce that the Fed voted to raise the overnight lending rate, yet again.  As expected, they were instituting a 0.75% (75 basis point) rise, making this the fourth straight 75 bp rise which is historically unprecedented.

Initial language was sanguine with indications that the rate of future changes would be considered on the economy’s data at that time.  The market initially took off and there was a sigh of relief from analysts and the financial media as they had been predicting we were in a seasonally attractive period.

That did not last long.

At the press conference follow-up, reporters had the chance to ask direct question to Chairman Powell.  One reporter got the party started when he stated directly to Chairman Powell that the market was up and must have liked the language he used at the announcement of the raise.

The market had an initial positive reaction based on the following language which was suggestive that less aggressive action would be necessary at future rate hike meetings:

“In determining the pace of future increases in the target range, the Committee will take into account the cumulative tightening of monetary policy, the lags with which monetary policy affects economic activity and inflation, and economic and financial developments.”

The question from the reporter (as well as the market’s positive interpretation) might have angered the Chairman.

Subsequently he wanted to be very clear not only about the Fed’s restrictive mandate but that the Fed was in charge.  The response has been described as the “Fed’s hawkish greatest hits.”

Mr. Powell emphasized that the Fed has further to go to get the policy rate to a restrictive level.   His direct response to the reporter’s question went something like this:

“It is very premature to be thinking about pausing” and that incoming data since the last meeting suggests the ultimate level of interest rates will be higher than previously expected and that “there is more ground to cover” before it meets the test of being at a restrictive level.

Stocks tanked and interest rates went up after this.  By the end of the day stocks had sold off over 2.5%.  See chart below: 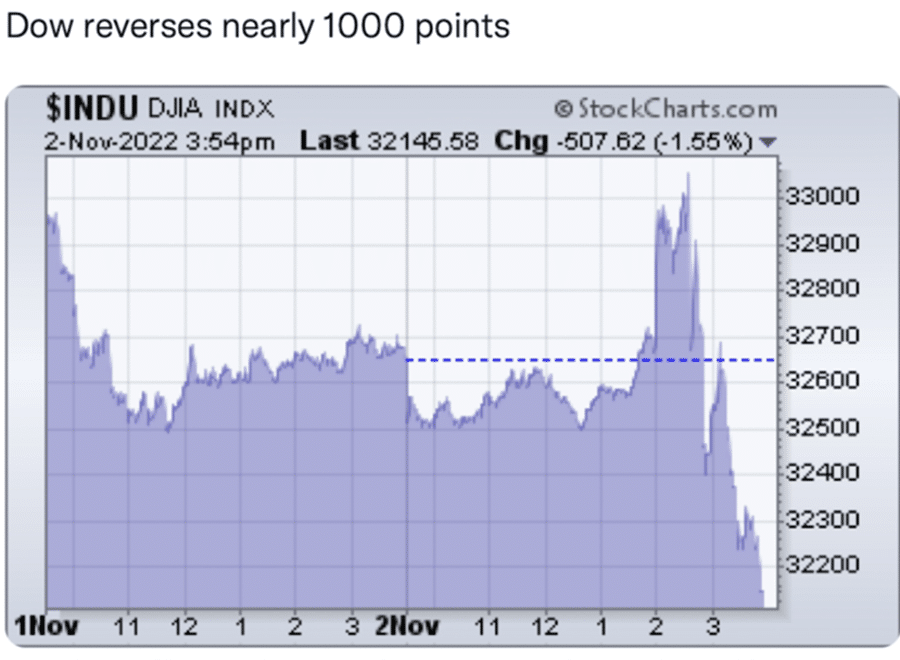 This was most discouraging to the critics who believe the Federal Reserve has raised rates too far, too quickly. The estimation that we are potentially in for another 75 bp hike in December and 50 bp hike next February punished the market quite hard.  See chart below: 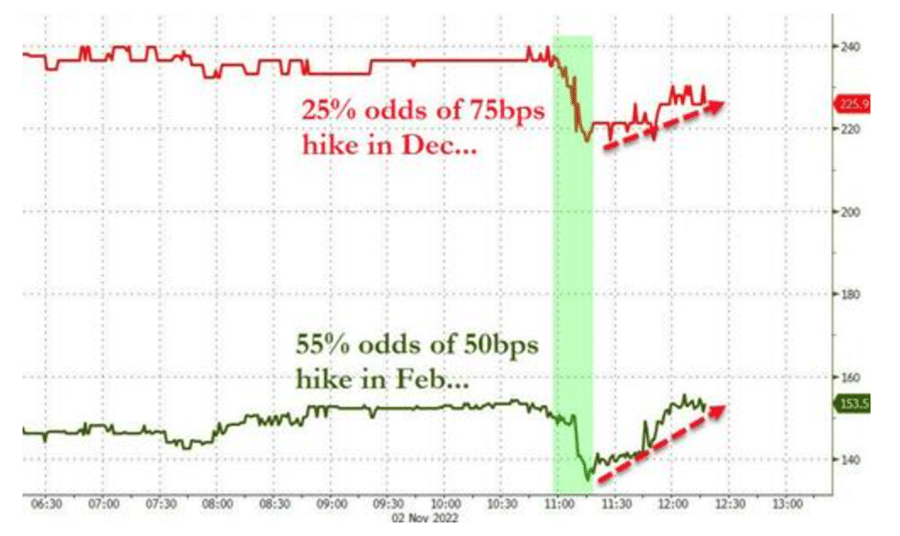 The market (S&P 500) ended the week down 3.2%, the tech heavy QQQ was down 5.9% and the Dow Jones Industrials down 1.4%.  But it was a good day on Friday which gave some investors comfort that not all is lost.

This was posted on Twitter Wednesday after the market’s close.  I found it not only accurate but something to consider.

Buyers stepped in on Friday and that was a welcome surprise given the long string of negative Fridays we had in August and September.  See chart below: 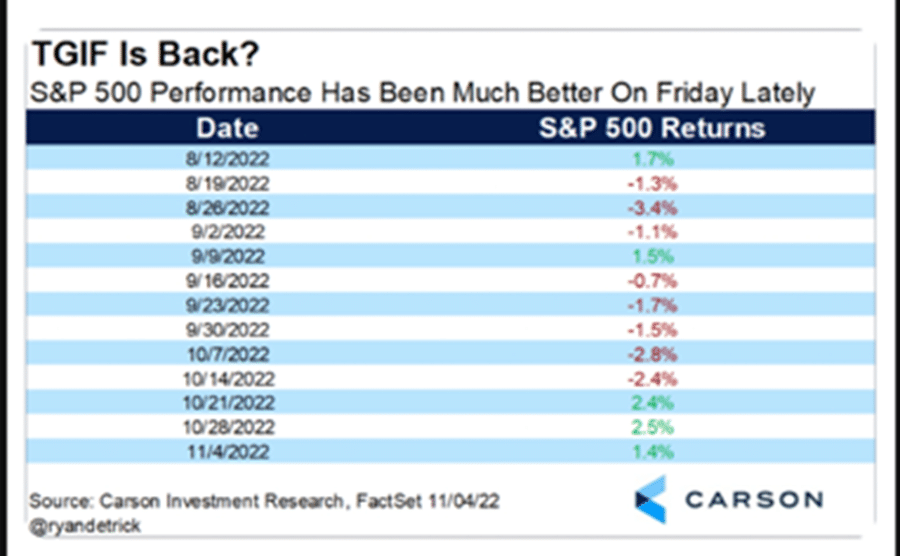 Will the Fed’s Restrictive Actions Lead to a Recession?  Will the Bear Market Continue?

Also, seasonality and after Midterm elections are a tailwind at investors’ backs.

Click here to read more about: seasonality and hopeful signs for the near future.