Marketgauge
3 weeks ago
by Brandon Ferris
0

5 Steps You Should Take to Position Yourself 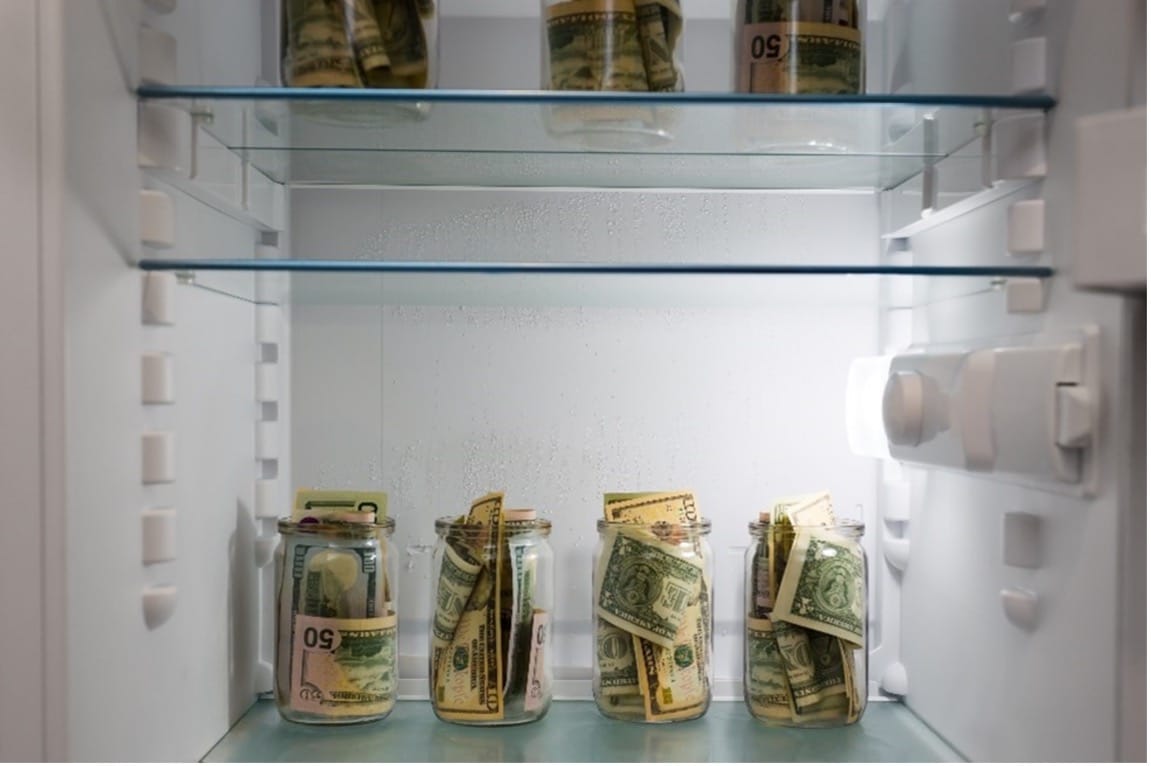 Readers of our Market Outlook and followers of MarketGauge will now be referred to as our Gaugers.

Hope you are having a good weekend Gaugers. For any and all Veterans that we count among our readers, Thank You for your service as we keep Veterans in our thoughts and prayers.

This past week saw the CPI numbers come out indicating that inflation has begun to cool. On Thursday morning (8:30 EST) the release of October’s CPI was expected to come out at 0.6%. When released the number was actually 0.4% and the market took off like a rocket ship. Year-over-year inflation went from 8.2% in September to 7.7% and investors celebrated a possible slowing (pivot) of future Fed interest rates (also covered in last week’s Market Outlook).

Our take: folks 7.7% is still a very hot number, and don’t count on Chairman Powell and company slowing down the pace of interest rate hikes anytime soon. They have made their opinion (and hawkish posture) very apparent. They have renumerated numerous times that they will not stop raising rates until inflation is trending towards 2% YoY. We do not believe they have any reason to pivot as yet.

However, the market had a different take and the dollar had it’s biggest two day decline (Thursday-Friday) since 2009.  10-year interest rates had a significant retracement and rates eased with the new information. We went from a 4 print on the 10-year to a 3 print by day’s end on Friday. See charts of the US Dollar (DXY) and the TNX (10-year rates below):

The Dollar (DXY) Chart broke its steep trendline this past week: 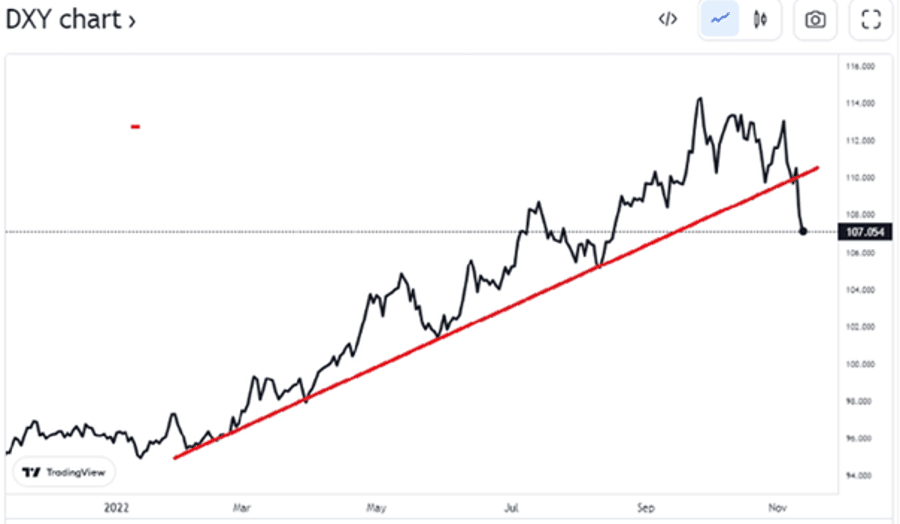 The ETF that trades the US dollar (UUP) had quite the fall. See the graph for UUP and TNX (10-year Treasury Rates) having fairly big price drops below: 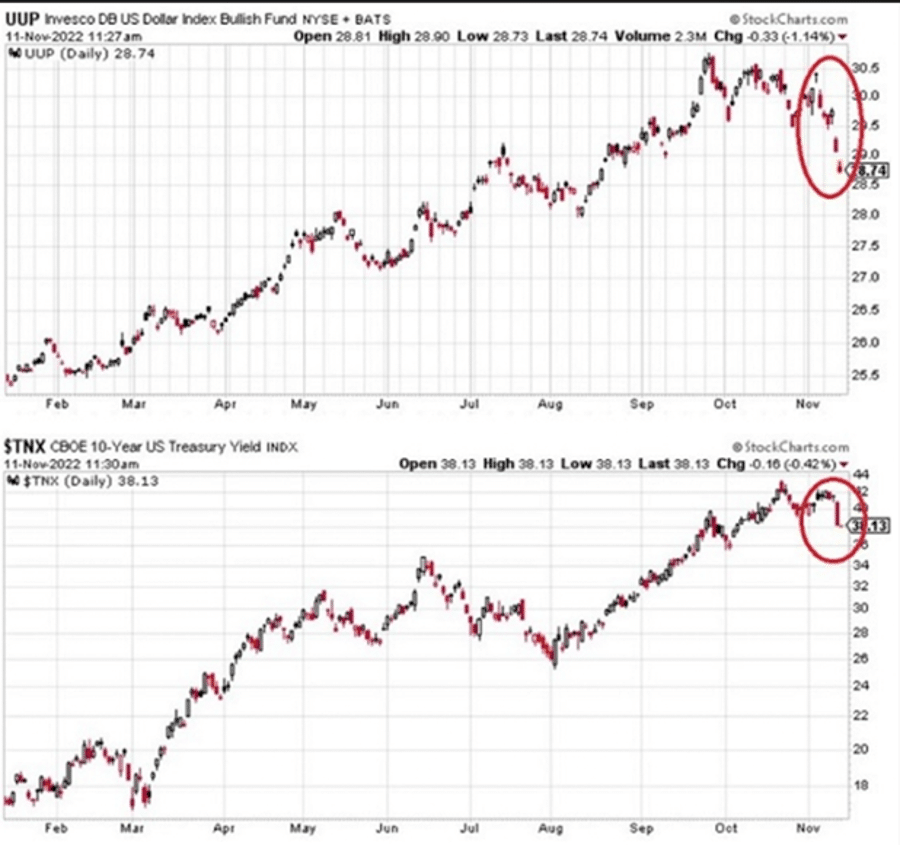 The “Cooling Off” of the Dollar and Interest Rates was a welcome sign that the economy is indeed “slowing down”.

The lower October CPI print motivated traders to cover shorts and put new money to work. It was the 15th best daily return on the SPY in history.

At week’s end, the Nasdaq was up 8.4% in just two trading days (Thursday & Friday). It was Nasdaq’s biggest gain since December 2008 . However positive that news is, it is important to note that just like in December 2008, we are still in a bear market. See the Nasdaq Composite chart for the past two months below: 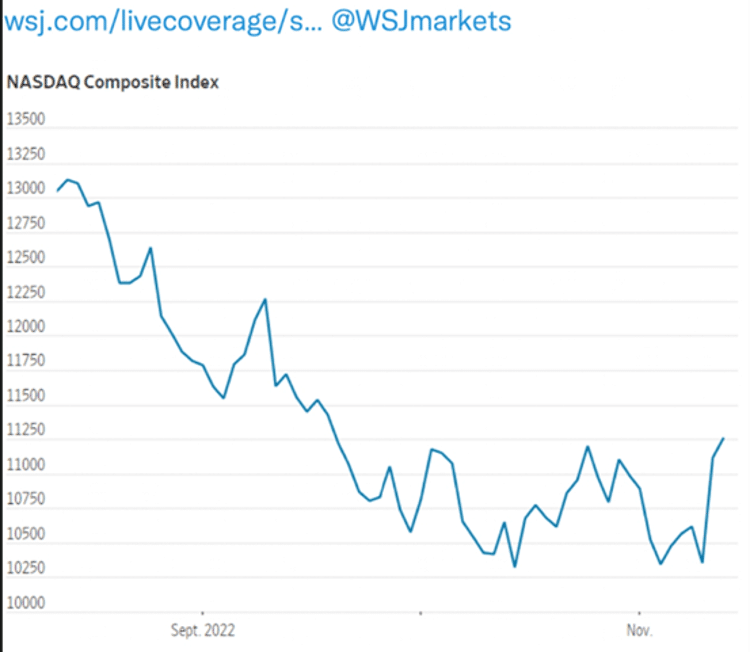 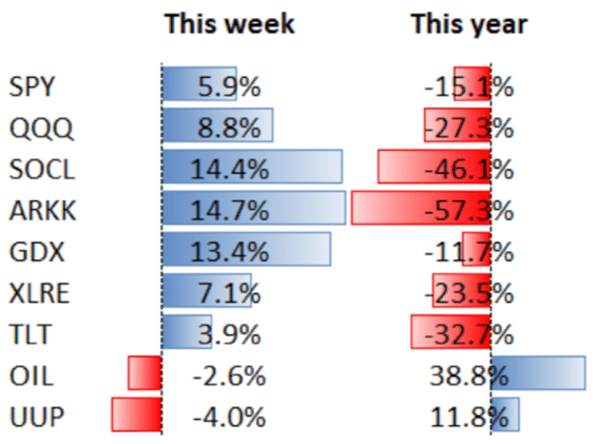 For a long time now (since early 2022) Mish has been commenting on the metals (Gold, Silver, Copper). Her most recent comments a week or so ago when she last appeared on Fox Business News can be watched here.

Mish has told many readers and watchers of her TV appearance to “watch the Dollar”.   She has long held the opinion that when the US Dollar breaks its steep incline (see above) that the metals could move dramatically.

Gold was up over $100 an ounce this past week. Copper soared even higher on a % price move. The metals made these moves higher as a result of the US Dollar and interest rates beginning to “cool off” as Mish has been continuing to suggest through her national TV appearances. See the Gold charts below: 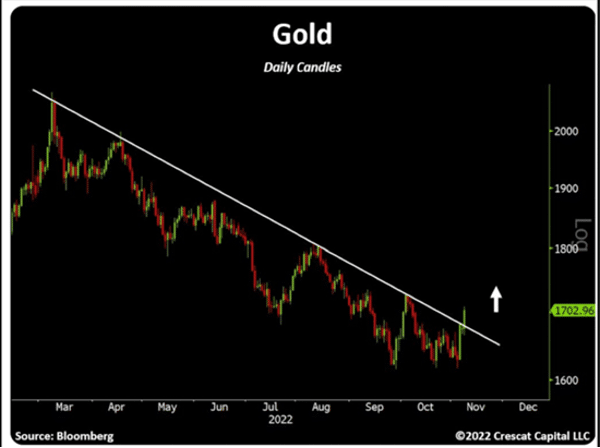 For information about the current favorable seasonality along with more information on the following:  Trouble in Cryptoland, why Warrant Buffet is not buying many stocks yet and the 5 steps you can take to position yourself for the coming slow down in the economy, click here: