Man has been utilizing wind power for thousands of years. Sailboats date back to the Roman Empire. Windmills of some type go back almost as far. Wind turbines, windmills that generate electricity, were developed in the late 1800s. They were used locally to provide power in places outside of urban electric grids. But it was the oil shortages of the 1970s that prompted a re-examination of alternative, renewable energy sources, including wind. The first wind farm in the U.S. (and, in fact, the world) was installed in southern New Hampshire in late 1980. It consisted of 20 turbines at 30 kilowatts each with blades less than 50 feet long.

Although oil became more plentiful and less expensive in the 1980s, some countries—especially in Western Europe— pursued wind energy vigorously. In the U.S., interest waned except in California, where environmental regulations made reduced fossil fuel usage a goal. As oil prices escalated in recent years, wind energy became economically viable. Wind farms began springing up in the U.S., typically over sparsely inhabited land areas. The idea of offshore wind farms had taken hold in other parts of the world, especially the North Sea. The first offshore wind facility was built in Denmark in 1991. For numerous reasons—political and otherwise—the U.S. once again lagged behind in wind power. It wasn’t until December 2016 that the first offshore wind farm in the U.S. became operational. The Block Island Wind Farm (BIWF) is about three miles southeast of Block Island, Rhode Island. It consists of five turbines at six megawatts each and submarine cables that connect the turbines and link the facility to a distribution network on Block Island.

What are the advantages of building wind farms off shore? A major factor is the wind itself—it tends to be stronger and more consistent over water. The relatively smooth surface reduces frictional slowing of the wind, and there are no obstacles to induce turbulence or block the wind. Also, the power of the wind increases exponentially with its speed.

Even a small boost in velocity can mean much more electricity generated. Another obvious benefit is that it doesn’t take up excessive land space. In addition, many coastal areas have high population densities and a greater demand for electricity. Other renewable sources of energy may be lacking. There are, however, disadvantages for marine sites.

Constructing and maintaining equipment in the ocean is difficult and often expensive. Depending on the occurrence of oceanic storms, the equipment may have to contend
with winds over 100 mph and waves of 50 feet or greater. Getting the generated electricity back to shore can also be challenging and costly. If the wind farm is within view
of the shore, aesthetics may be a concern, especially for tourist destinations. 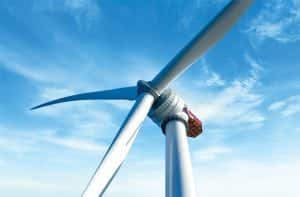 One of the limiting factors for offshore wind energy is the need to have the turbines secured to the ocean floor. This has relegated wind farms to near offshore areas where
the coastal shelf is at a depth of 200 feet or less. One way around this is to have floating turbines. Although prototypes have been experimented with for some years, the world’s first floating wind farm off the coast of Scotland has just become operational. In theory, such floating structures could function in water as deep as 3,000 feet or more. Although not economically practical now without government subsidies, it is believed that advances in floating turbine technology will allow profitable operations in the future.

The wind turbines themselves can be massive. With a central tower that may be 300 feet high and rotating blades of 250 feet in length, the entire structure might rise more than 600 feet above the water level. And beneath that, the supporting foundation can extend from the ocean surface down to several hundred feet below the ocean floor. Their sheer size brings about other concerns.

For example, mariners risk colliding with one of the wind turbines, especially when visibility is diminished. Either a boat could strike the tower or the windmill blade could
hit a mast, etc. Deepwater Wind, the parent company of the BIWF, has a page on its website solely dedicated to “Information For Mariners.” The Mariners Fact Sheet gives
the latitude and longitude of all equipment and includes a map. Briefing For Mariners describes all current and planned operations.

Another concern about offshore wind farms is the effect on marine life. Government biologists will scout out potential sites to ensure the least amount of disturbance to the
environment. There is particular uncertainty over sensitive fish habitats. Some preliminary studies from other countries have actually shown that the supporting foundation of the wind turbines can act as an artificial reef that enhances marine life. As for fishing, the BIWF has a Fishery Liaison, who facilitates communications from the commercial fishing industry to the BIWF and the various government agencies involved. They are there to help resolve any conflicts that may arise.

Although much of the proposed wind farm development is off the Northeast Coast, locations farther south are being studied. Generally, winds are stronger in the higher latitudes. But the area off the Outer Banks of North Carolina is deemed prime grounds due to consistent winds and shallow water. Even in the Gulf of Mexico, sites off the Texas and Louisiana coasts are also being considered. dwwind.com

Cruise to these Virginia Vineyards

How Deep is the Ocean?

Fuel for Thought How to decide the best option for…