Humans can’t hear underwater sound in the same way that whales or other creatures can.

Sound is an integral part of the undersea world. In fact, sound travels very well through water and much faster than through air. Furthermore, due to the thermal structure of the ocean, there are sound channels, or zones, where sound waves can propagate for long distances—hundreds and even thousands of miles—without losing much amplitude.

Humans can hear underwater sound but not very well because our ears and hearing system were designed to detect sound traveling through the air, whereas fish have inner ears and are better for detecting sound transmission through water. Fish also have the lateral line system on the outside of their bodies that can detect sound vibrations.

Cetaceans—aquatic mammals including whales, dolphins, and porpoises—also have evolved to hear underwater sound well, and they’ve developed the ability to make sounds to communicate with each other. Humpback whales, especially, are famous for their “songs.” Some toothed whales even have developed their own form of sonar, which they use to bounce sound waves off objects to determine the nature of the object and its distance. Scientists believe that echolocation—the biologically correct term—is critical for these ocean residents to perceive their 3D environment and travel through it.

Why is sound so critical to marine creatures? Because light and visibility issues often hamper sight, and olfactory signals are diluted and dispersed by water, sound is important to locate food, avoid predators, navigate the undersea world, and is the primary means of communication with their species. 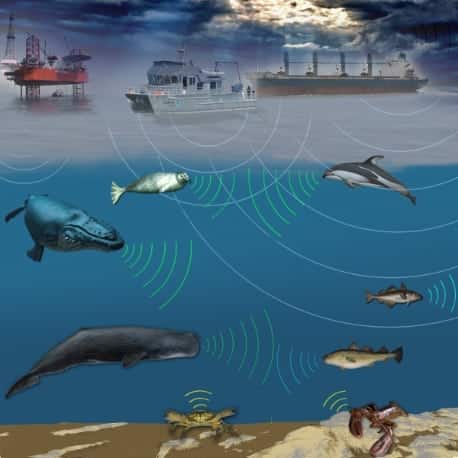 Since the oceans formed and life flourished in them, marine creatures evolved to utilize sound. Marine life does not recognize the “foreign” sounds that man makes underwater
and often shies away from them if possible, including sounds as seemingly harmless as the bubbles that come out of scuba air tanks. Of much greater concern are the louder and more omnipresent man-made sounds that contribute to underwater noise pollution.

There are a number of major sources of man-made noise in the oceans, including the use of sonar. The Navy uses very powerful audio signals, and the sound can travel for hundreds of miles. Another major source of noise is the sound from ships, whose turning propellers, engines and ship systems emanate through and from the hull. In recent years, geological surveying to discover underwater oil and gas deposits has led to another significant source of noise. Prospecting operations use sound waves generated by blasts from seismic airguns to reveal geologic features underneath. These blasts can come out every 10 seconds, and the whole process can continue for weeks or months. The sound is estimated to be orders of magnitude greater than ship noise. The initial boom will morph into a more continuous roar as it traverses the ocean, and the sound can travel hundreds of miles.

Underwater sound can drive the ocean’s inhabitants away from natural locations and affect feeding and reproduction. It can interfere with communications between individuals
or individuals with a group, and it has been speculated that sonar signals have caused some whale beaching incidents.

To address the issue of noise pollution in the ocean, the National Oceanic and Atmospheric Agency (NOAA) started a two-phase program in 2010 concentrating on cetaceans. Phase One involved defining the problem. One component consisted of mapping marine mammal locations, including variations over time. Of primary concern were “Biologically Important Areas,” where cetaceans reproduce, feed and migrate on a regular basis. The other component involved mapping of sonic danger zones. In 2014, NOAA deployed 10 undersea listening stations to measure ambient noise levels and to determine trends. Man-made sound levels were categorized by location, time, intensity, and source— commercial and passenger ships (chronic noise) and seismic surveys (noise events).

Phase Two of the program addresses mitigation of the noise problem over the next decade. For example, voluntary guidelines for commercial shipping to reduce underwater noise have been laid out, and now ships are being built that are 1,000 times quieter. Also, seismic vibrators like the ones used on land are being developed for underwater use to send out low-frequency vibrations rather than explosive shock waves resulting in a less obtrusive sound.

A variety of environmental groups, such as the Natural Resources Defense Council and Ocean Conservation Research in the U.S. and the International Ocean Noise Coalition, a
group of more than 150 non-government organizations from around the world, have taken legal actions against noise polluters. In fact, in 2013 the Marine Mammal Protection Act was successfully used to combat the U.S. Navy’s use of sonar in the Pacific.

photos from Wikipedia and Adobe

Sea Trial on the Horizon PC 74