Rising seas are more than a threat. They’re a reality.

It’s been a little more than a year since I first wrote about rising sea level and the problems it is causing. In this time, a considerable amount of data has come out on rising seas.

Unfortunately, most of it is not good news. A recent study of the Antarctic ice sheet concluded that the ice loss rate—which has amounted to 3 trillion tons in the last 25 years—as tripled in the past 10 years, adding to the rise in sea level. Another group of researchers noted that if the glaciers that hold back ice sheets on top of Antarctica and Greenland were to collapse, this could lead to extremely rapid rising seas around the world.

In this scenario, it’s predicted locations like South Florida could see a sea level increase of 10 to 30 feet by 2100. Another study on global mean sea level using satellite altimetry shows not only is sea level rising, but the rate of rise is too. This means that actual sea levels by 2100 could be twice as high as currently predicted using the observed rate of increase.

In an article published in July, a group of scientists compared future climate forecasts with past climates of a similar temperature. A warming of 1.5˚C (well below the 2˚C goal of the Paris Climate Agreement) could bring about “significant shifts in climate zones and the spatial distribution of land and ocean ecosystems.” The scientists said, “The changes we see today are much faster than anything encountered in Earth’s history. We can expect that sea level rise could become unstoppable for millennia.”

In my previous article, I noted that there has been a significant increase in “fair weather” flooding or flooding that occurs with non storm-related high tides. Although seas are rising everywhere, the amount of increase is not consistent around the world. The southeast coast of the U.S. has been particularly hard hit. A slowing of the Gulf Steam which transports water away from the East Coast and changes in atmospheric circulations seem to be the causes. In Miami, fair weather flooding events now occur 20 times per year. Charleston had 50 such events in 2016.

In a study released by the National Oceanographic and Atmospheric Administration (NOAA) in February, it was noted that the rate of such flooding was also increasing particularly along the southeast Atlantic coasts. Scientists concluded: “With continued sea level rise, high tide flood frequencies will continue to rapidly increase.”

The question is, “If we’re already at this point, can anything be done to protect our vulnerable coastlines?”

In 2007, the Coastal Resilience program was initiated by The Nature Conservancy (TNC), NOAA, the Association of State Floodplain Managers, several universities and private companies, and various international organizations. “Coastal Resilience” is defined by NOAA as “building the ability of a community to bounce back after hazardous events, such as hurricanes, coastal storms, and flooding, rather than reacting to impacts. 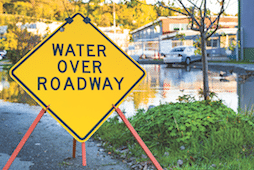 A community that is more informed and prepared will have a greater opportunity to rebound quickly from weather and climate-related events, including adapting to sea level rise.” From TNC’s viewpoint, “Coastal Resilience is a program to examine nature’s role in reducing coastal flood risk. The program integrates community engagement with maps. It’s delivered through a network of practitioners around the world supporting hazard mitigation, climate adaptation, and conservation planning.”

The first step is to define the problem. There are two aspects which must be considered: the threat and the threatened area. Threats include coastal storms, hurricanes, tsunamis, and high tide flooding. All are aggravated by the continuous sea level rise. The area threatened varies depending on the situation and coastal features.

What can be done to minimize flooding?

Coastal areas include natural habitats and man-made structures and infrastructure. Both must be considered when determining the risk and the ability to lower that risk. Solutions can also incorporate both. Nature has its own way of protecting coastal areas. Sand dunes can block damaging waves and, to a certain extent, the water level rises. Coastal wetlands and forests can similarly protect inhabited areas that are somewhat inland. Natural protection systems have been called Green Infrastructure. Where they’ve been damaged or destroyed, they can be brought back. Existing natural areas need to be protected.

In terms of human development, regulations, land use planning, building codes, and flood preparedness are tools. Structural features, such as sea walls, groins and breakwaters can be built. Natural habitats can be protected and maintained. Man can even mimic nature with artificial reefs, etc.

According to NOAA, “Decision-makers in coastal communities around the country need actionable information to make informed choices. The National Ocean Service provides a suite of services and expertise to help communities identify risks and vulnerabilities to apply sustainable solutions that increase resilience to the impacts of climate change, extreme weather and coastal inundation. This is about ensuring that coastal citizens, planners, emergency managers, and other decision-makers have the reliable information they need when they need it.”

To help planners fully understand the critical issue they are actually facing, the Coastal Resilience Mapping Portal was developed. This web tool includes past and future flood risk models, FEMA Flood Zones, wetlands area, and land cover. By clicking on a map, users can also see what projects are already in progress.

One NOAA tool that is particularly striking is the “Sea Level Rise Viewer”. For selected coastal areas, you can see the predicted results of various amounts of sea level rise. If this isn’t enough, they have included recognizable landmarks and show how water will engulf them. To help communities plan for the future, NOAA Coastal Resilience Grants are available. NOAA will also provide educational materials and even courses on the subject.

How Will Climate Change Impact Fishing?

MJM hits the mark with its new day yacht the 3z

Out for the Day MJM hits the mark with its…

With an impressive 330-nautical mile range at 23 knots, The…