Red Tide is a menace with no simple solution

The infamous red tide algae on Florida’s southwest coast has died or moved offshore, so beaches are open to visitors again.

Data gathered during the 2018 event is showing why those blooms originate offshore, when they form and their routes to the shoreline. Researchers dispatched and steered a robotic minisubmarine with sensors that picked up the red tide scent way offshore and then tracked it to the coast. Computer simulations with the new data showed that the spring or summer timing of ocean currents make a big difference.

Typically, offshore loop currents and eddies push up against the West Florida continental shelf in the spring. This causes an upwelling which moves nutrients to the surface. In most years, the red tide algae (Karenia brevis) remains offshore on the bottom and, without a supply of nutrients, remains quiescent.

In 2018, however, Gulf loop currents pushed up against the shelf later than usual, in mid-July, but by then K. brevis cells were already gorging on nutrients and blooming. Ocean
currents and winds then brought the algae to the shoreline. A team led by Dr. Robert Weisberg at the College of Marine Science at the University of South Florida in St. Petersburg has published the findings in the Journal of Geophysical Research.

But below the surface, marine life took a big hit. Snook and redfish, two nearshore gamefishes, are of major concern. Recently, new initiatives were announced to help the cause.

One is Adopt a Snook, a collaboration of Coastal Conservation Association-Florida,
Mote Marine and the Florida Fish and Wildlife Conservation Commission (FWC).
The plan is to raise and release 10,000 juvenile snook into brackish tidal creeks in
2019 and 2020.

To protect stocks and to maximize future spawning success, FWC has extended the
catch-and-release calendar for snook and redfish from Pasco County south to Gordon
Pass near Naples. Until May 11th, anglers in that zone must release all snook and
redfish. After May 11th, redfish regulations return to normal and anglers may keep one
redfish between 18 and 27 inches. The regular fall snook season starts September 1st.
Anglers may keep one snook between 28 and 33 inches until the end of November.

Another initiative directly tackles water quality to benefit all marine life. Sarasota
Bay Watch (SBW) is more than doubling down on planting native clams to help filter out
unwanted nutrients that make algae blooms worse. In 2017 and 2018, SBW volunteers
planted close to 250,000 native clams in Sarasota Bay. Those clams survived the 2018
red tide bloom, giving the nonprofit a green light to proceed with a new, long-term
plan to raise funds, enlist volunteers and plant another one million clams to filter out
unwanted nutrients.

So far, a million pounds of decaying marine life have been disposed of, including hundreds of sea turtles, dozens of dolphins, over 100 manatees, and even a whale shark. A noticeable stench was often present, and many beach-goers fell victim to respiratory stress including breathing difficulties and coughing. And we have red tide to blame for it.

What exactly is red tide? It’s one-celled algae called Karenia brevis commonly found in the Gulf, and typical blooms (rapid increases in numbers) cause little problem. In high concentrations, however, the algae turn the water a reddish-brown color (hence the name). But because this event has nothing to do with tides, scientists prefer to call it a harmful algal bloom (HAB). Similar situations occur in other areas around the world with a variety of algal species. But this particular HAB is especially noted along the Gulf shores of Florida and Texas and can be extremely harmful.

K. brevis emits a toxin called brevetoxin, and excessive blooms can fill coastal waters with it. Shellfish are immune, but they accumulate the brevetoxin in their bodies, which makes them hazardous to eat. Other aquatic life succumb to the poisonous waters. For people, problems arise through skin irritation and rashes after swimming in it or when, according to Kristie Anders, education director of the Sanibel-Captiva Conservation Foundation, “Crashing waves turn the toxin into an aerosol which people breathe in.” Those already with chronic respiratory issues are at particular risk. There may even be long-term health effects.

To put numbers on the problem, background concentrations of K. brevis are 1,000 cells per liter of water or less. At concentrations of 5,000, shellfish, if eaten, can cause illness, and harvesting beds are closed. Fish kills and human respiratory problems can start when concentrations of this algae reach 10,000 (still classified as “Low”). This year, levels surpassed one million (“High”) at the coastline. Concentrations some distance offshore are even worse with readings in the tens of millions.

What do the experts say?

Marc Suddleson, program manager of NOAA’s National Centers for Coastal Ocean Science Monitoring and Event Response for Harmful Algal Blooms Research Program, says that the red tide algal blooms typically start in late July, often 10 to 40 miles off the coast. K. brevis can actually move, primarily with the wind and currents. Patches of the algal bloom then drift toward the shoreline where concentrations increase due to the shallower water’s lower salinity and increased nutrient levels, notes Dr. Robert Weisberg, professor and director of the University of South Florida’s Ocean Circulation Group. Occasionally, the blooms “explode,” and that’s when problems occur.

The current event actually began in October 2017. Anders points out that rainfall from Hurricane Irma in September caused nutrient-rich runoff water to flow into the estuaries and mix with offshore waters enough to stimulate a K. brevis bloom. This moved ashore and intensified and by the end of the year, dead fish were reported in Charlotte, Lee and Sarasota counties. Later in the winter, cooler water temperatures blunted the bloom, but with the warmer temperatures of summer, it came back with a vengeance.

The major questions are: What causes the explosive K. brevis blooms, and what can we do to stop them? It is widely believed that the culprit is nutrient pollution from inland agricultural runoff. There is a major push to do something about this.

What does it mean for today?

From anecdotal evidence, we know that red tide events that produce fish kills have been occurring in the Gulf for hundreds of years, even as far back as the 1700s. With limited data, we have no way to compare those events to today. In any case, Suddleson claims that red tide events now seem to start earlier, last longer, occur more frequently, and are more intense. He also adds that nutrient pollution may be a contributing factor but is not a significant factor. In fact, a long-term research project sponsored by NOAA concluded in 2014 that there is no direct link between nutrient pollution and the initiation of red tide. 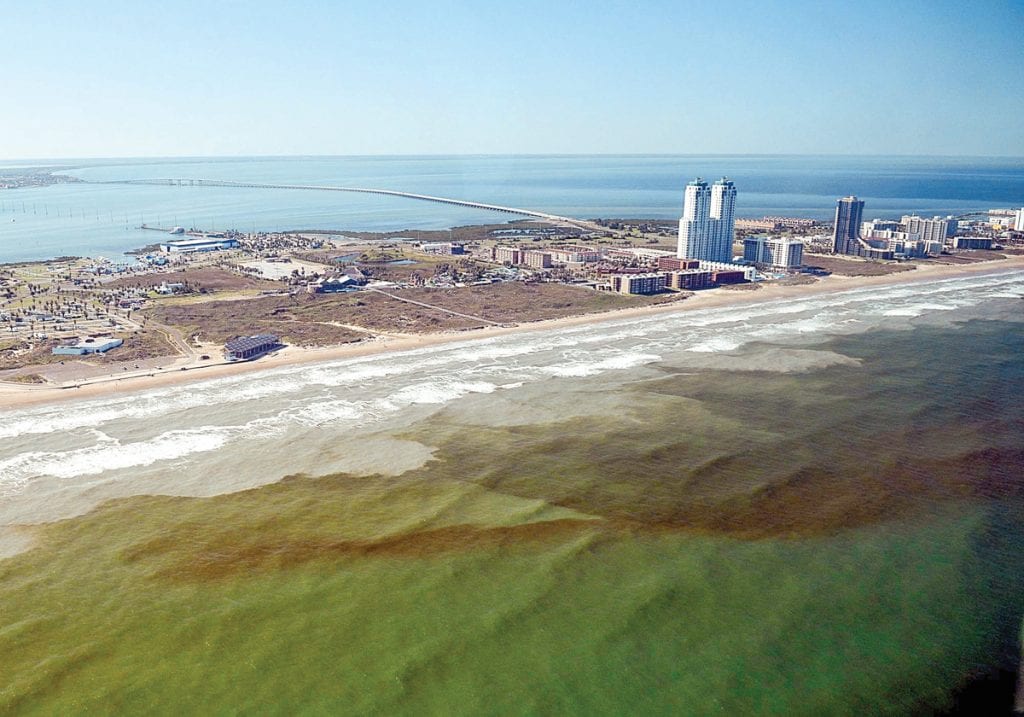 So, what is the cause?

Algae are very simple, mainly aquatic plants that need sunlight, nutrients in the water and a proper water temperature and salinity, all of which vary with species. Variance in any of these factors can affect algal growth. Clouds of dust which have traveled across the Atlantic from the Sahara Desert can block some light.

Also, if one species of algae blooms earlier, it can block the sunlight from other, slower developing species. Nutrients in the water come from a variety of sources. Anders points out that large phosphate deposits and mines have existed for years in the area around the Peace River, which empties into Charlotte Harbor located north of Ft. Myers, Florida. She also notes that in this rapidly developing region, there are many sources of nutrient pollution, including lawn fertilizers.

Dr. Weisberg has his own theory on red tide events. He believes the Loop Current, which dominates the circulation of the Gulf, varies in exact location. At times, the circulation produces strong upwelling off Florida’s west coast. If this happens in the spring or summer, these nutrient-rich bottom waters feed other types of algae which can then suppress K. brevis. Red tide events occur when K. brevis outcompetes other algae. Using past data on Loop Current position and red tide events, Dr. Weisberg noted a near perfect correlation, and the model is used to predict future outbreaks. Once an event is ongoing, Weisberg’s group sends out forecasts of movement going out for several days

How will we know what’s going on?

In terms of the water itself, one lab-based study showed that the K. brevis algae had an increased growth rate when both the water temperature and carbon dioxide level in the water increased. We know that both of these are occurring. However, Suddleson points out that there is a limit to this and if water temperatures continue to increase, K. brevis may not fare well.

Red tide is monitored closely. NOAA uses satellite observations to detect K. brevis blooms while they are still far offshore. Water samples along the coast are analyzed for the algae’s presence. When an event has developed, NOAA will issue forecasts twice weekly which include actual conditions and expected impacts. The Florida Fish and Wildlife Conservation Commission sends out a weekly Red Tide Status update which includes a forecast done in conjunction with USF.

Although scientists may disagree about the impact of agricultural runoff for red tide but can agree that red tide causes additional problems. Blue-green algae outbreaks and red tide should be controlled. Red tide is an extremely complex problem still being studied for both its cause and the solution, neither of which offers simple answers.