Their natural domain is in the South Pacific and Indian Oceans. There, they are a normal and healthy part of reef ecosystems. Here in the US? Not the case.

Learn more about the 2019 Lionfish Challenge.

About 30 years ago, the (admittedly beautiful) red-and-white striped lionfish began appearing off the coast of Florida. They’ve expanded quickly since, demolishing native fish populations in the Caribbean and up the Eastern Seaboard.

The pesky species can and will eat anything: their appetites are voracious and unending. Unfortunately, native species of small reef fish like baby snapper and grouper don’t recognize them as predators. That makes bad things happen to the ecosystem.

In the Bahamas, the bait fish (or prey fish) biomass fell between 65 to 95 percent after the initial invasion. That’s according to Stephanie Green, a marine scientist at Stanford’s Center for Ocean Solutions.

And the big predators, like sharks, don’t see the fish as a meal. Their venomous spines have allowed them to spread rampantly. So, it’s the perfect storm: lionfish spread, unchecked, devastating reef ecosystems and fisheries.

Unchecked may even be an understatement. The fish are prolific breeders, putting even rabbits to shame.  A single female can release upward of 6 million eggs a year. Those millions of eggs are capable of floating for more than a month, dispersing for thousands of miles, spreading into new areas. They’re everywhere: lionfish can be found in shallow mangroves or 1000 feet deep, which is why populations are hard to wipe out once established.

That’s not to say that efforts are not underway. With nets and spears, divers and scientists are taking to the water to turn the hunters into the hunted.  There are lionfish hunts from North Carolina to the Caribbean and beyond. Organizations like REEF and agencies like Florida Fish and Wildlife provide resources and information on hunts, biology and more.

There is some good news though. Lionfish are delicious. There’s even a “Eat ’em to beat ’em” campaign among conservationists, biologists, hunters, and chefs. Comparable to any other flaky white fish, the species can be baked, fried, ceviche-d, and more. Whole Foods is developing its own product lines, too, like smoked lionfish. There are a million ways to prepare it.

from The Lionfish Cookbook by Tricia Ferguson and Lad Akins 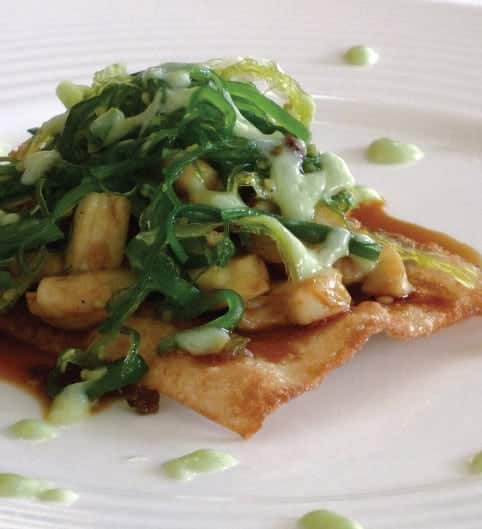 *Items can be found at Asian markets.

Place oil in a small frying pan and heat oil until hot. Place one wonton wrapper in at a time. Cook briefly until it starts to bubble (approximately 10 seconds). Turn and cook another 10 seconds. Remove and drain on kitchen towel.

Put wasabi mayonnaise into a squeeze bottle and set aside. Combine sweet soy sauce, sweet chili sauce together in a bowl and set aside. Spray skillet with non-stick cooking spray.

Cook lionfish fillets in a skillet over medium-high heat for 2 to 3 minutes, until flaky and tender. Cut or flake lionfish so it is in small pieces. Toss lionfish in soy sauce mixture.

Inspect Your EPIRB or PLB

How do we eradicate lionfish?