The excitement of sight-fishing for sharks turns the hunt into a thrill sport.

You sense it before you see it—a big shadow off the port bow halfway between you and the mangroves you’ve been quietly probing for snook and redfish. Leisurely, it eases into focus, then picks up some speed while heading your way. Within seconds, it’s fully broadside 10 yards from your vessel and strikingly huge. It’s a 200-pound bull shark on the prowl, and all you can do is watch in awe as it swims past; the lightweight spinning stick in your hands could never withstand the battle.

“Moments like that can really get your heart beating and take your breath away, so imagine how you’d feel battling a huge shark like that on relatively light gear,” says Capt. Martin Carranza of Miami Fishing Charters in Biscayne Bay, Florida (captmartinc.com). 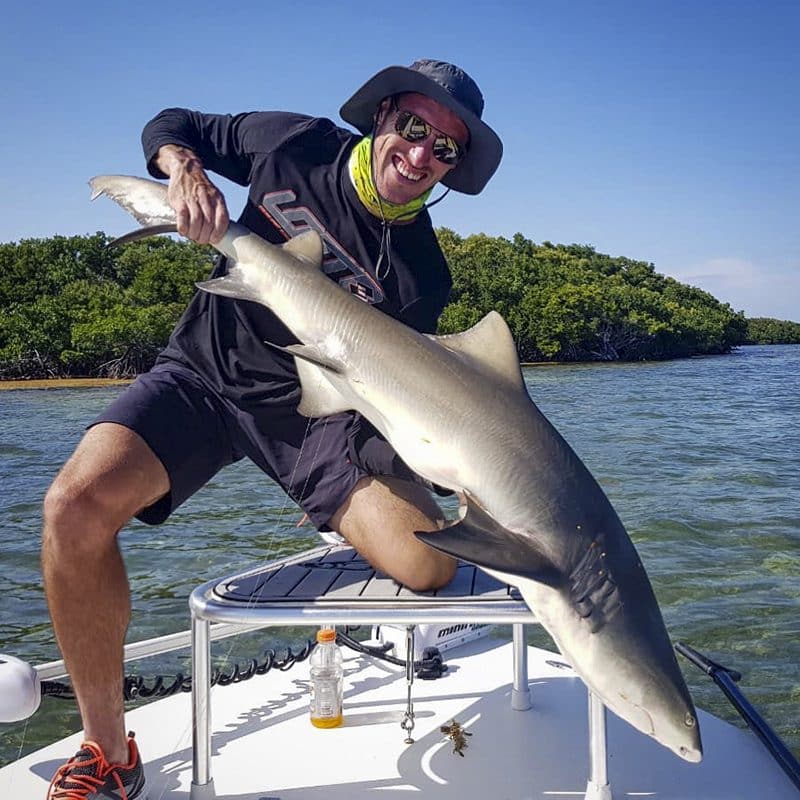 If you’ve ever experienced that emotional roller coaster, rest assured you’re not alone. Sight-fishing for shark is actually “a thing” these days, and it’s rapidly gaining followers wherever the big and toothy apex predators patrol inshore flats.

“I’m not surprised it’s becoming so popular,” says Carranza. “Anglers want to catch massive fish, and sharks fit that bill. They crave seeing fish explode on their baits, lures, or flies, and that’s exactly what sharks do in the shallows. They aspire to catching something unusual, and sharks are anything but run-of-the-mill. What’s not to love?”

Indeed, sight-casting for sharks—targeting fish you can actually see—is a fast-growing aspect of the inshore game these days. It can be practiced just about anywhere sharks come into shallow water to feed, but the blossoming sport is most popular on expansive sand flats. Here, the action is at its most thrilling and explosive as anglers witness the strike and then hold on for dear life as their quarry powers away.

Without any deep water to sulk in, most sharks blast off at warp speed, and some even jump high in the air in attempts to tear free of the hook or break the line. With an experienced captain at the helm of your boat, the dance between angler and fish is at best one of controlled mayhem. Thanks to the smoothness, power, and efficiency of today’s inshore tackle, however, anglers win the battle more often than you might think.

“It’s exciting, exhilarating, and a true test of strength, all of which is good for new and novice fishermen, but expert anglers will love the hunt for these big fish as well and, of course, the art of hooking them,” says Carranza. “I grew up in Patagonia and Brazil, targeting big trout in shallow waters with fly rods. Sight-fishing for sharks takes that wonderful experience and expands it enormously. It’s not just the catching of fish I’ve grown to love over the years, but the hunt, the skills, and the need to adapt on a moment’s notice that drives my passion for this sport.”

Capt. Kyle Johnson, of Coastal Waters Outfitters (fishcoastalwaters.com) in Biloxi, Mississippi, agrees. “If you haven’t tried sight-fishing for shark, you’ve been missing out on some wild action,” he says. “We fish the shallows around Ship and Horn islands, and once our charters try it, they’re instantly hooked for life. I absolutely love infusing newfound passion into anglers of any age or skill level by introducing them to this sport.”

Although both skippers ply the inshore flats, it’s interesting to note that their primary approach to locating feeding sharks varies significantly. Johnson likes to set up along the edge of channels or cuts that border expansive flats. His preference is to anchor adjacent to known cruising routes and wait for the sharks to come to him as they search for breakfast, lunch, or dinner.

Carranza, on the other hand, prefers to get up on the flats, poke around, and chum with pilchards to draw a variety of fish close to his vessel, hoping that all the activity and chum in the water eventually lures in the ever-inquisitive sharks for a look.

In either case, there’s no telling what kind of shark will arrive first on the scene. Most will measure in the 4- to 7-foot range and weigh 40 to 100 pounds, but much bigger brutes, some weighing several hundred pounds, are always a possibility. Some days, notes Johnson, you get to pick the ones you want to cast for as many can be seen at the same time.

To a large degree, where you fish determines the species of shark you’ll encounter while sight-fishing. In Gulf Coast waters where Johnson plies his trade, black tips, spinners, and bull shark dominate the scene with occasional tigers bringing the ultimate big-fish challenge. In Carranza’s Florida Everglades and Biscayne Bay neighborhoods, blacktip, lemon, spinner, bull, and hammerhead sharks are all viable targets. In the shallows of Georgia, South Carolina, and North Carolina, blacktips, spinners, sandbar, and bull sharks tend to lead the parade. 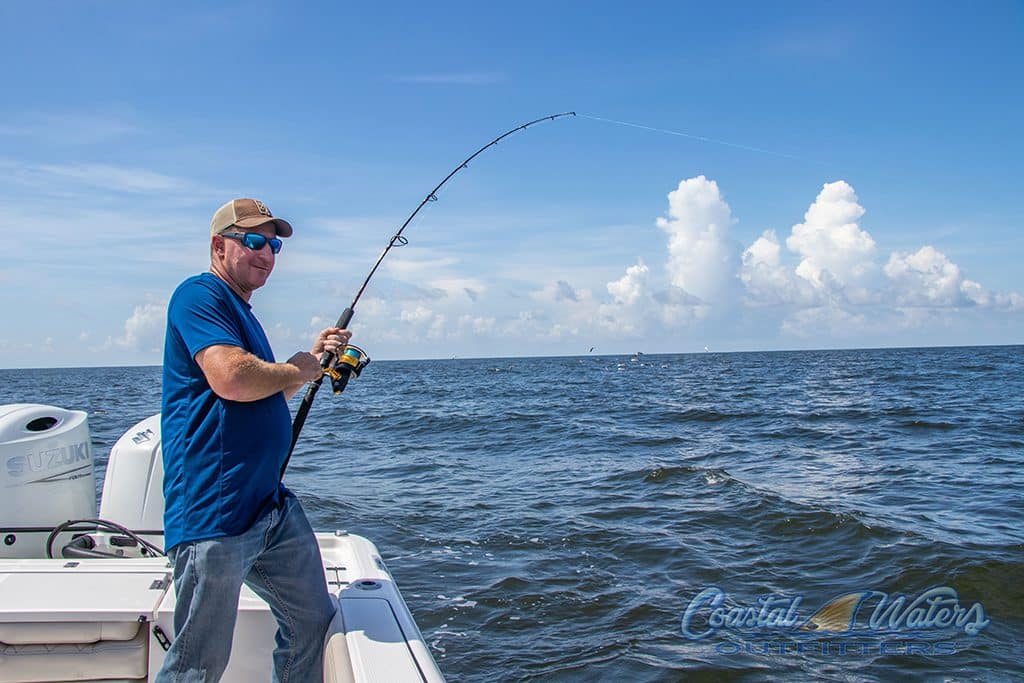 As with any other kind of fishing, you’ll need appropriate tackle and gear to battle these bruisers up close. Every captain has personal favorites when it comes to rods and reels, but Johnson says a sturdy six-foot, 30- to 60-pound-class spinning stick with a fast tip, matched to a 5,000 series spinning reel spooled with 50-pound braid, is a good starting point. For rigging, a 24-inch leader of 60-pound-test monofilament or fluorocarbon leader material, seven-inch #9-gauge wire leader, and an #8/0 or larger circle or J-hook will get you started.

“We’ll go heavier if there’s a true brute around, but that’s what we usually start with. For bait, I like fresh-cut mullet. I don’t throw a lot of lures for sharks since there’s a good chance you are going to lose them.”

For fly-casters, Carranza recommends a nine-foot, 10-weight rod, with a floating 10- weight line, 9-foot leader tapered to 30-pound-test, and 12 inches of 30-pound-test single-strand wire. With that, he’ll throw two patterns. One is an orange Shark Fly, the other is a Northeast pattern called a Cut-Bait Fly. It’s popular with striper fishermen but works on sharks as well. If you want to try something really different, Carranza suggests a walk-the-dog retrieve with a surface lure along the lines of a Zara Spook. Big sharks will often crush that. Both skippers, by the way, include spinning and fly-fishing outfits in their sight-fishing arsenal.

As for what to do when that big shark strikes, the answer is to just hold on and let it run. Most sharks will give a couple strong runs out of the gate. Outlast these and you’ll eventually gain the upper hand. There’s little you can do to stop them until they wear themselves out so know that you’ll need to show a little patience. For sharks that jump, “bow to the king,” just as you would to a jumping tarpon. If you don’t ease off a jumping fish, it’s going to part your line.

Shark fishing certainly is thrilling, but it can also be dangerous, especially to those new at the game. For that reason, we suggest heading out with an experienced shark fishing angler or charter skipper before sharking on your own.